Contribute Now
Ad
The name Walter Burley Griffin is fading in the city of Nawabs. Time and apathy are erasing the legacy of the 19th century American architect who gave Lucknow some of its famous buildings.

Griffin’s mark in the world of architecture still resonates. He undertook several site-planning commissions in the United States and Australia, the most notable being the design of Australia’s capital city Canberra. He moved to Lucknow in November 1935, but succumbed to peritonitis in February 1937. He was buried at Nishatganj cemetery in Lucknow.

During his brief time in the city, Griffin was enchanted by Lucknow’s splendour. He found the Nawabi architecture exquisite and likened Lucknow’s skyline to a perfect “Arabian night’s dream of white domes and minarets”. He united Eastern architecture with Western modernism in ways that provided a fitting culmination to his works.

Lucrative commissions streamed his way in the city.

It started with the Tagore Library at the University of Lucknow – a project underwritten by the Raja of Mehmoodabad. “The model of the two-storied building was placed in the old library for students and staff to suggest improvements in the plan,” a historian from Lucknow said. “However, there was an inordinate delay as the project faltered under local constraints.”

Griffin’s work on the Tagore Library led to his first private works – a number of admirers and patrons commissioned him to design their homes. The first to finish among these was a zenana – quarters for elite Muslim women – appended to the palace of Raja Jehangirabad.

In addition, Griffin designed the press for the Pioneer newspaper, the wonderful pavilions of the United Provinces (now Uttar Pradesh) agricultural exhibition in Lucknow in 1937, and a civic memorial to King George V (his only work linked to the British). Among his key landscaping plans were a new campus for the Lucknow University and a garden for its library. 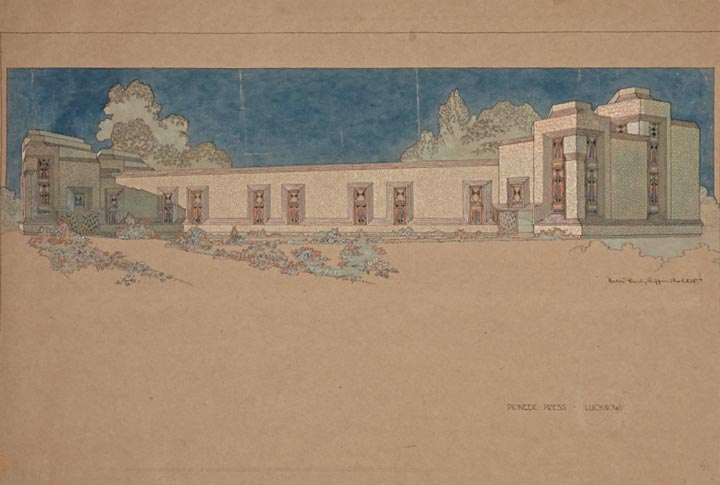 In 15 months, he and his wife worked on over 50 projects, from private dwellings, gardens and public edifices to housing projects and suburban communities.

The prolificacy would have continued had fate not intervened. Griffins died on February 11, 1937, in King George Medical Hospital, resulting in the abandonment of several of his projects. He was buried in an unmarked grave at Nishatganj cemetery.

“In his designs, Griffins refused to incorporate locally derived motifs and religious iconography,” said Professor Christopher Vernon of University of Western Australia. “Instead, he built follies through combinations of disparate fragments that lacked historical precedent. His projects interrogated the construction of Style as marker of identity and a source of moral instruction.”

Sadly, in Lucknow, knowledge of Griffins’ labours is scant today. There has been no interest from local researchers or archives department to identify the full extent of his work. Lucknow has again become a site of urban erasure, threatening the documentation and conservation of Griffins’ legacy.

The famous Pioneer press structure was razed in the 1990s and replaced with a multi-story building. Unlike Canberra, which commemorated the architect’s services several times, Lucknow has not paid even a minor homage to Griffins.

As his 138th birth anniversary approaches on November 24, the only reminder of Griffins is his grave in a desolate corner in Lucknow, his remarkable is getting lost somewhere in the pages of history. 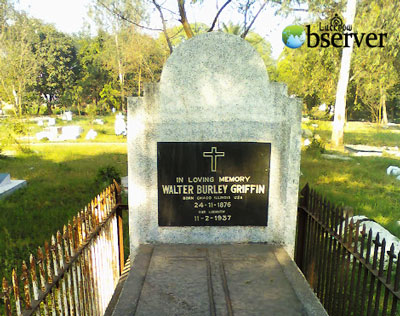 This is an edited version of an article that first appeared in The Lucknow Observer.