Contribute Now
Ad
What comes to mind when you think of the Arctic? Ice, I imagine, polar bears, a barren cold landscape. And most would assume that these associations have remained the same for a pretty long time, given that it’s only relatively recently that the Arctic was explored. It is generally believed that the earliest maps reflected this ignorance, showing a vast blank expanse waiting to be filled with geographical content by explorers.

This is not the case. That came much later, in the 18th century, when myths and hearsay had been overridden by the rigour of scientific investigation. In fact, when the Arctic first begins to be shown in detail on maps in the 16th century, it’s teeming with life and activity.

Let’s start at the beginning. The earliest appearance of the Arctic in maps is as a frigid northern region in the climatic maps of Macrobius from the fifth century. “Inhabitabilis” it is labelled, in common with its southern counterpart. Not only was the Arctic unknown in the Middle Ages, it was felt by scholars to be unknowable. 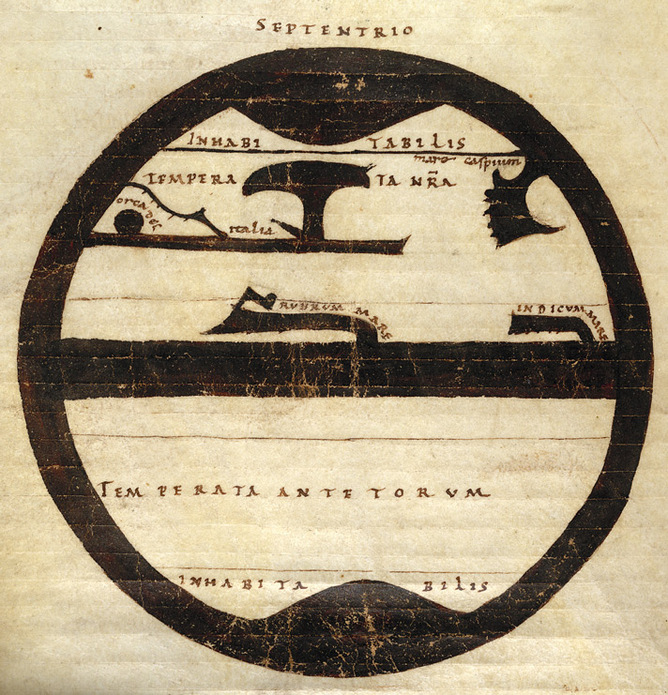 In medieval world maps the extreme north, as with the south, became the area where legends could be placed. You might see on a late medieval mappamundi, for example, the giants Gog and Magog from the Alexander Legend at the northern area of modern Siberia. You might see deformed creatures with big feet or faces in their chests populating the southern rim of the world. You would certainly see mythical islands and places that do not exist next to places that do.

But to the people who made and looked at these maps the places were real, whether they existed or not. This is the great power of maps, a power that has not diminished over time. The island of Frisland, for example, appears like a second mini-Iceland, and even occasionally part of the southern tip of Greenland. Frisland originated with the Greeks and had a mystical allure – a sort of northern Eldorado. A similar allure comes to characterise that “mariner’s philosopher’s stone”, the Northwest Passage. 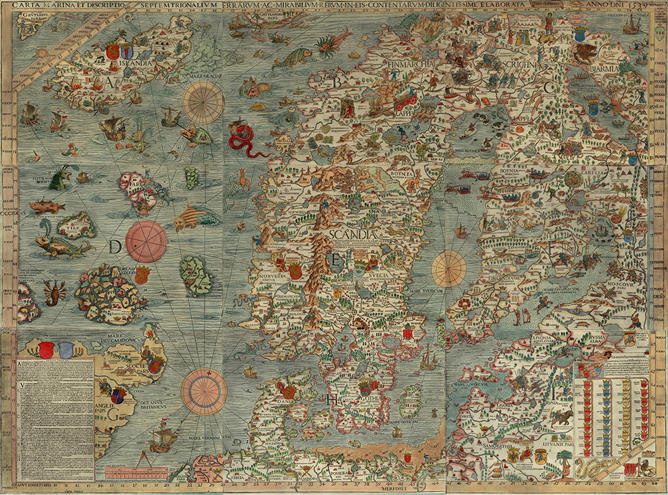 As the geography of the north became better defined from the end of the 15th century, features quickly populated it on maps. Reindeers, polar bears and other creatures litter the Olaus Magnus map of Scandinavia.

One of the most interesting Arctic features first appeared in Martin Behaim’s globe of 1492. This is an extraordinary North Pole with four rivers running symmetrically from the pole. This feature was repeated in various maps for decades after, including Gerard Mercator’s famous world map of 1569 and atlas map of 1595. 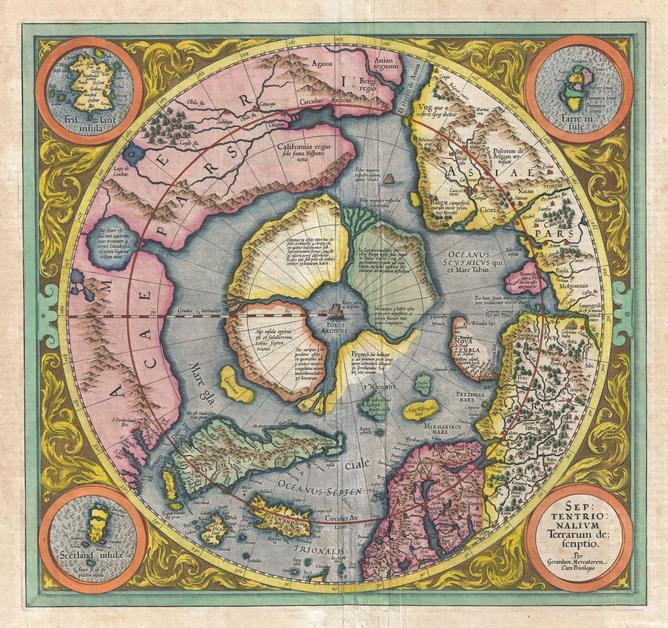 Another bizarre feature added to early maps was the appearance of a vast magnetic mountain at the top of the world – myths often hold a grain of truth! Early sailors found that their mariner’s compasses began to show bizarre readings in northern climes and this certainly may have had something to do with this addition to the maps. The legend more directly derived from a journal of an Arctic voyage supposedly made by a Dutchman named Jacobus Cnoyen, who witnessed these and other peculiarities. Any sources, spurious or not, were treated seriously by European states looking to expand their gaze and their empires.

For Britain in the 16th century, the promise of a northern shortcut to the Pacific Ocean and the riches of China meant that considerable thought and resource would be poured into the Arctic, to explore geographies real or otherwise. Geographical features appeared and disappeared on maps, mountains rose and fell, channels and straits, based on seemingly unimpeachable sources, were cut through North America.

The tale of the search for the Northwest Passage is a compelling one – and one which illustrates how tangible things can be when there is the will to believe them, and when they are shown on maps.