Contribute Now
Ad
Veteran editor Vinod Mehta was promoted in 2012 to the ceremonial post of editorial chairman of the Outlook group. That was two years after he published the Radia tapes story in Outlook magazine. On the eve of the publication of his second set of memoirs, Editor Unplugged: Media, Magnates, Netas and Me, he spoke to Scroll.in about the state of the media. This is the first of a two-part interview.

It's surprising you have joined Twitter, considering you recently wrote that social media and you are strangers.
For the moment, flogging my book is my number one priority.

I said i would never twitter.But the sequel to Lucknow Boy comer out on Dec12. I have to flog it since it is like my Will.

Your book should do well given that your previous one, Lucknow Boy, was a bestseller.
Yeah, but I am not taking a chance. Sequels don’t always do well. So I am on Twitter only till my book is out. It is temporary. I have been forced by the fact that it is such a powerful medium. But I don’t enjoy it. I am a very verbose kind of person. Putting things in 140 characters… I am too old now. It is a young man’s game.

When you decided to run the Radia tapes story, what was your calculation? What did you think the repercussions would be for you and Outlook magazine?
When I heard the tapes, I of course calculated the damage they would do to various individuals and their organisations, whose recordings we were publishing. In that, one name which we gave a great deal of thought to was Ratan Tata. Not only was he a powerful individual, his company controls a lot of advertising. Both him and his company have a great reputation for integrity. But then I thought it would be cheating to do the story without putting him in. He was one of the fish in the Radia tapes. So we thought about what consequences there could be. But the material on the tapes was too compelling in terms of public interest.

Also, to some extent I worried about the journalists I had mentioned. Both Barkha [Dutt] and Vir [Sanghvi] were my friends.

Are they still your friends?
No. I am banned from NDTV. Previously, I used to appear at least twice a week on NDTV. But since the Radia tapes story, I have never been invited. And frankly, I don’t miss it.

There’s a chapter in the book called "TV and I". I have mixed feelings about becoming a mini TV star and pontificating every night. Of course it tickles my vanity. When I go to the airport, people recognise me. I come from a generation of journalists which never took TV seriously. We in the press did serious stuff, and they did the sensation.

But you are on Times Now rather often.
Yeah, but of late I have reduced my appearances there as well. Another reason is that some of these people on TV debates are so young, so much my junior, that I don’t feel like getting into a squabble with them, shouting at them, and saying you are wrong, wagging my finger. They are very young. And I generally do not like raising my voice. I don’t like raving and ranting, which you have to do on TV.

I find that a TV appearance takes a great deal of my time. The night I have to do a TV programme, I am quite nervous. One doesn’t know what one is going to say. I must have done 500 TV debate appearances but even today when I appear on TV, it’s a nerve-wracking experience. And then one finds that in a 90-minute debate one gets to speak for only three minutes.

Did you try to make up with Barkha Dutt and Vir Sanghvi?
NDTV did a programme [to clarify and defend what Dutt had said in the tapes]. You must have noticed they ran a scroll at the bottom of the screen, saying Vinod Mehta refused to come for the programme.

I felt, who am I to tell Barkha that this is against journalistic ethics? I don’t like preaching. I didn’t want to get into a slanging match with her. I didn’t want to tell her that, "Listen, I am so many years senior to you, you’ve done something professionally wrong." Anyway, I had nothing to defend. The story spoke for itself.

Prannoy Roy called me up and said come for the programme. I said no. I was taking Editor [Mehta’s pet dog] for a walk. Prannoy said you have to come because you have maligned one of my journalists and you have to be fair to her. I said I hadn’t maligned her in your programme. If I had maligned her, it was in Outlook. She is free to respond.

He asked how many words, I said you suggest. He said 800 words. I agreed. Then, she had to send her copy on Wednesday. She did not. So I called up Prannoy Roy and said, "Friend, I can’t hold the page any longer. Barkha hasn’t sent the copy. He said give me 10 minutes." She soon sent her response. It is there. We didn’t change a word.

Same thing with Vir Sanghvi. He said, "Can I take a rain-check on my response?" I said sure. He took a year and then subsequently wrote his piece, that he got the tapes tested somewhere and they found the tapes to be fabricated.

Is there anything about the Radia tapes story you regret?
Nothing.

Any individual you think you were unfair to?
Technically, MK Venu. The cover story was about the 2G scam. Venu in the tapes is not talking about 2G but about Ambani’s gas matters. So we apologised for that.

How true is it that the Radia tapes is what resulted in your leaving active editorship of Outlook? Can we say that the story cost you your job?
Obviously, we had some trouble with the advertisers. We were blacklisted by the Tatas. I won’t say it cost me my job. By that time I had already been editor of Outlook for 17 years. And the Rahejas [proprietors of the Outlook group] had been very good to me. So when they suggested change, I said okay. I suspect that they may not have asked for the change had it not been for the Radia tapes. But I didn’t press the matter. I was quite ready for it.

It wasn’t just one or two journalists, the Radia tapes story took on virtually the entire media.
Radia tapes are a benchmark in seriously damaging the reputation and credibility of journalists, both electronic and print. Until then, only a select few knew all the dirty games that were going on. The public at large still thought that we are great patriots, we did things in public interest, we would never publish things that were inaccurate, that we would not be swayed by monetary or other considerations. But after the Radia tapes, a big question mark appeared about journalists.

In opinion polls about corruption, journalists began to enter the top 10 corrupt professionals. Then I saw another opinion poll that asked people how they would rank the service that these professionals provide. Suddenly journalists disappeared from the list that included teachers and scientists.

Shekhar Gupta once sent you a legal notice for your criticism of his story about strange army movements in Delhi.
He never followed it up.

But you wrote about that in your diary column.  What is the root of your dispute with him and are you friends?
Well, if you look at this issue of Impact, there is a picture of us with his arm around me. Yes, of course, we are not the best of friends. We are civil and courteous in public. Any disagreement is only professional.

Are there any current editors you admire?
No. Khushwant Singh was the last editor I admired. But the new generation of editors. They are very good, very professional, all rounders, very successful. But I have nothing to learn from them.

If they are good, why do you have nothing to learn from them?
One of the reasons is that I like myself, if I could say that. Since 1974 I have been consistent. I haven’t changed my line. When I see editors wobble, go from one extreme to another, that is the first sign of professional weakness. I am not suggesting that people can’t change their minds. But there is a Laxman rekha. My Laxman rekha is pretty simple: secularism. 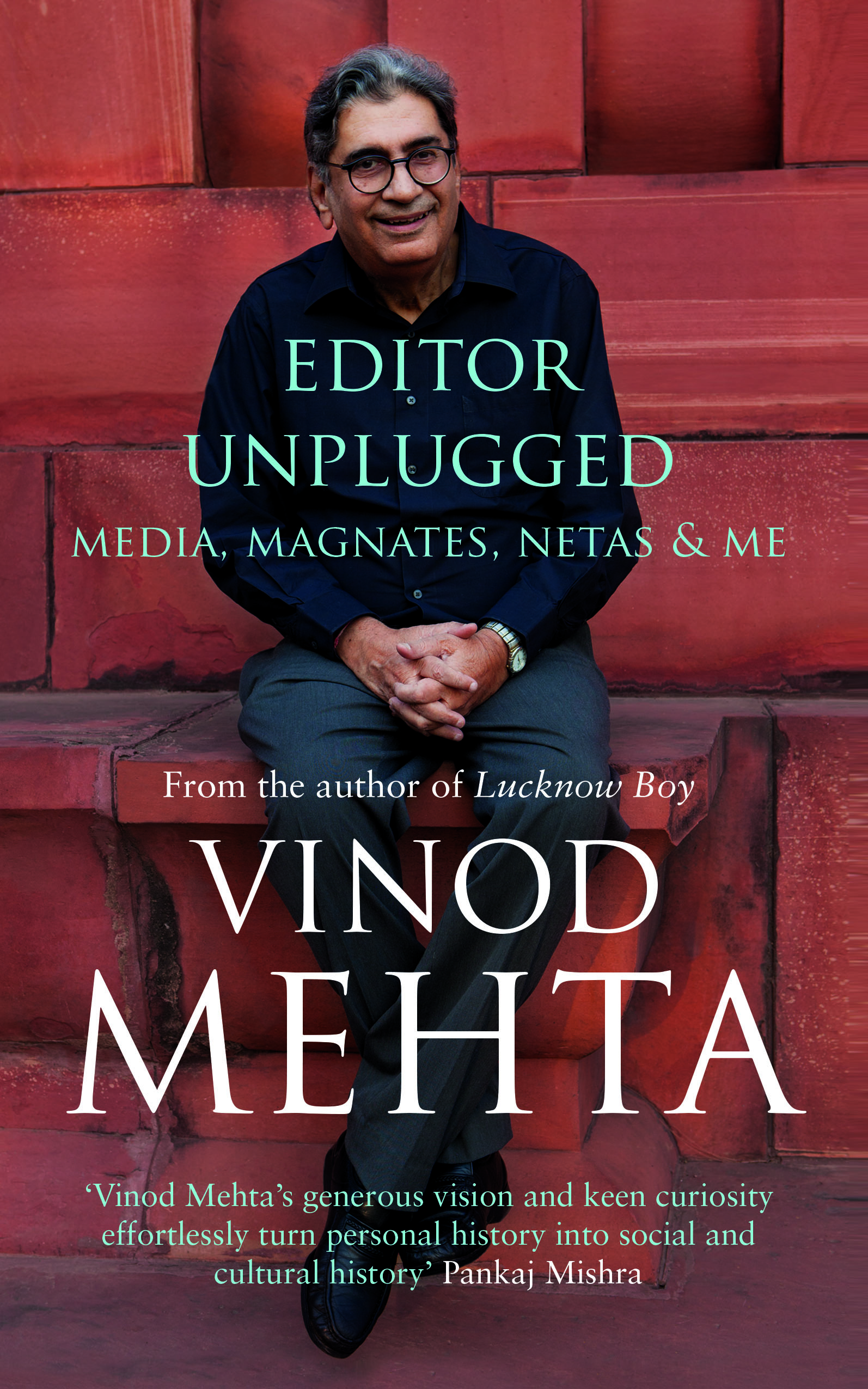