Contribute Now
Ad
The Bharatiya Janata Party-led Central government announced in July that it would roll out a National Health Assurance Mission, whose aim would be to provide some free medical services to reduce “out of pocket spending on healthcare by the common man”.

It is thought that the NHAM could be active as early as this month, and could cost $26 billion, according to a senior health official. This is a noble gesture: according to a report on healthcare costs in the BRICS countries (Brazil, Russia, India, China and South Africa), out-of-pocket expenditure pushed as many as 60 million Indians below the poverty line in 2010.

Going by a Planning Commission report accessed in May, India spends only 1.04% of its GDP on publicly-funded health, while its total health expenditure (public and private) was 4% in 2010-2014. The same report aspired to increase public health spending to 3% of GDP by 2020 and to 4% by 2025. A lot has changed since then, especially when the Narendra Modi government cut down the health spending by $900 million for 2014-2015 citing lack of funds.

Nonetheless, the reason India’s healthcare indicators remain abysmal is not just a question of money (after all, ours is one of the fastest growing economies). The problem is a persistent rash of doublespeak that denies the people a coherent healthcare system. While successive governments have committed to various goals, no government programme has yet focused on the three most important problems facing India’s health at once: a mismanaged regulatory climate, corruption, and the caste system.

The problems with regulation are illustrated by India’s medical tourism industry, which according to government sources will be worth Rs 9,500 crore in 2015, and as much as Rs 54,000 crore in 2020. Almost 75% of the medical imaging equipment (worth Rs 18,000 crore in 2011) that services this industry is imported and the value of imports themselves grew at a compounded rate of 16% in 2010-2014.

There is an import duty on fully-finished devices to the tune of 10%, whose cost is transferred to consumers. It gets better here: if device components are imported individually and then assembled in India, there is an additional excise duty and VAT, increasing the device cost. This tax suppresses domestic manufacturing of diagnostic equipment and the import-intensive economy it fosters continues to inflate healthcare costs in a country where only 30% of healthcare is publicly funded.

It has also led to a chicken-and-egg squabble between medical advocacy groups in the country. For example, ahead of the presentation of the Union Budget in 2010, the Department of Pharmaceuticals sought a cut in the customs duty to facilitate imports, while the Association of Indian Medical Devices Industry sought a hike to promote domestic innovation.

The report that claimed out-of-pocket expenses had pushed 60 million people below the poverty line also found that urban centres were the primary users of sophisticated medical equipment even as the per capita expenditure on medical technology in the country was a frugal $2 to $2.5.

A part of the problem is corruption and inefficiency. There is no national body to oversee the procurement and provision of generic medicine, which currently originates from local manufacturers known to operate their plants in unsanitary conditions. On April 7, the day Sun Pharma announced that it would fully acquire Ranbaxy Labs, Wockhardt publicly acknowledged that its plant in Aurangabad had been found to contain urine and mould in the vicinity of testing samples during an inspection by the US Food and Drug Administration.

All three companies now are disallowed from exporting certain drugs to the US and Europe. The reason they are allowed to release their drugs in the domestic market is because there is a demand for generic drugs and because there are about 1,500 health inspectors for more than 10,000 factories in the country, resulting in one in every 22 locally-produced samples being of substandard quality. In Tamil Nadu alone, 4,000 health inspector positions remained vacant in 2012.

Moreover, public healthcare professionals are not up to the mark. As the recent Chhattisgarh sterilisation camp tragedy illustrated, medical camps are often understaffed by ill-equipped doctors and technicians. One surgeon at the Chhattisgarh camp reportedly performed 83 tubectomies in six hours. In Odisha, cycle pumps were used to dilate the cervices of some women in a sterilisation camp.

Data from the Ministry for Health and Family Welfare shows that, since 2008, 700 people have died after going through government-sponsored sterilisation programmes.

What exacerbates all these issues is the social setting their providers and users are situated in, and the caste system in that setting. On November 20, Arundhati Roy gave a lecture at the University College London, titled "The half-life of caste: The ill-health of a nation". She started by saying, “We are still a society where a public health worker will refuse to touch children who are ill because they are untouchable. There are doctors who refuse to do a post-mortem because it’s polluting to touch” a dead body.

She argued in the lecture that the notions of purity and pollution that casteism enshrines, whose persistence M K Gandhi secured by institutionalising them during the freedom struggle, often deter good health practices, especially among poor women and children and those belonging to the lower castes. As the chart below shows, India’s infant and maternal mortality rates are worse than those of its neighbouring countries and BRICS nations. 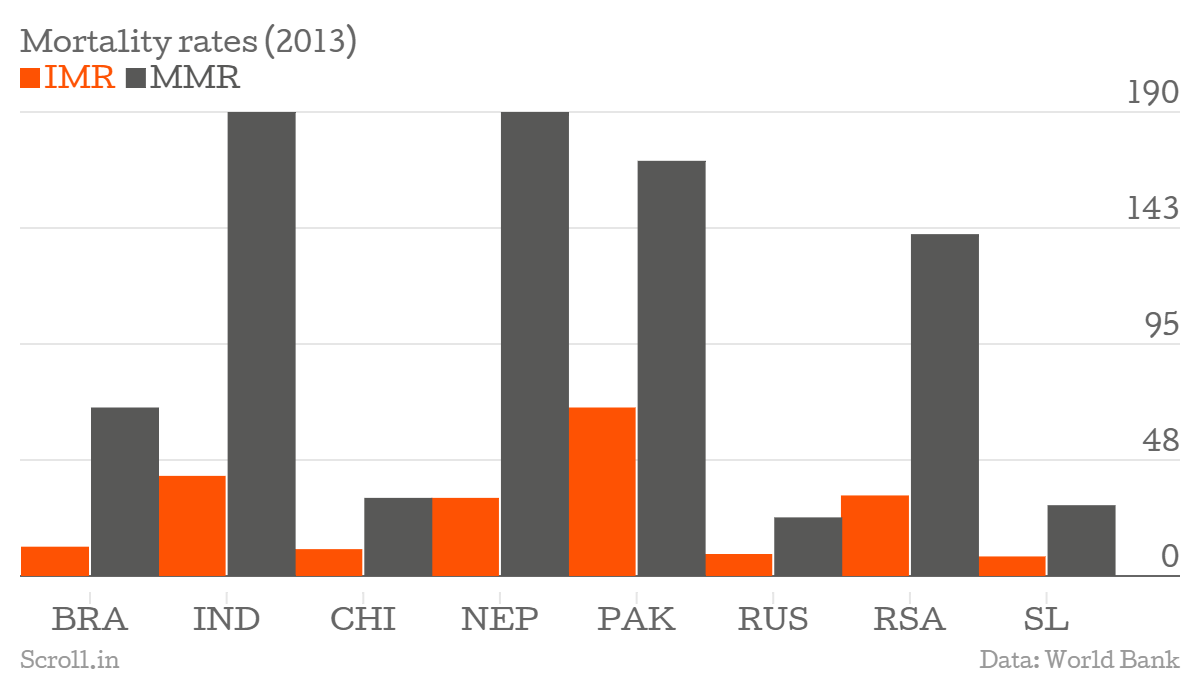 As the British medical journal The Lancet wrote in an editorial on November 29, “This ingrained inequality has led to tacit acceptance of the caste system, which has created, among other challenges, a preventable epidemic of mortality among women and children.” In effect, irrespective of what changes are instituted at the top, they will not reach the masses if access to healthcare and medical services remains segregated by caste.

These three hurdles are further compounded by successive governments’ tendencies to confusion. On one hand, Prime Minister Narendra Modi promises more All India Institute Of Medical Science in the country and on the other cuts the health budget by $900 million. The United Progressive Alliance government before him managed to eradicate polio but let that pursuit overshadow that of full-immunisation, the rate of which has fallen in developed states like Tamil Nadu, Maharashtra, Haryana and Punjab.

Such equivocal measures are the product of the thinking that health is purely a biological concern, not influenced by understaffed training institutions, overzealous eradication drives, import-friendly regulations, inexplicable shortage of health inspectors or segregation by caste.