Contribute Now
Ad
Shrien Dewani has been cleared of any part in the murder of his bride Anni, who was shot on their honeymoon. A South African judge threw out the case, rejecting the prosecution’s argument as “far below the threshold” of what a court could convict on.

The case has been sensationally covered in excruciating detail in Britain’s tabloid press, with particular focus on claims about Dewani’s sexuality and use of male prostitutes. While these issues were relevant to the case, since they formed a core part of the prosecution’s theory, the way they were reported was a lurid and revealing demonstration of how homosexuality and bisexuality are still framed as deviant by the UK press.

One of the Mail Online headlines following the verdict states: “Lawyers who used his fetish for gay sex as a ‘motive’ for murdering Anni may face bid for malicious damages.”

Referring to gay sex as a fetish, or conflating it with one, is highly questionable. A fetish usually refers to a sexual fixation with objects, body parts or situations that are not conventionally viewed as sexual. The word also has connotations of (at least statistical) abnormality, and kinkiness.

As Dewani disclosed that he was bisexual at the start of his trial, we would expect him to enjoy having sex with men. That is not a fetish; it’s a normal part of sexuality for millions of men. And while Dewani’s visits to a male prostitute did involve elements of sado-masochism and role-play, gay sex in and of itself is not a fetish. To refer to it as such merely characterises it as something niche, weird, and kinky, rather than a normal and natural form of human expression.

Meanwhile, the Sun’s story of October 6 reported Dewani as having “sensationally admitted being bisexual”.

I looked at a 100m word sample of general English to find out what other things people are regularly said to have “admitted” to, and the list is a telling one: drink-driving, burglary, robbery, assault, wounding, grievous bodily harm, kidnapping and stabbing. The word “admitted” has a deep association with crime, so to say someone “admits to being bisexual” is a tellingly tilted way to frame their sexual identity.

Perhaps more tellingly, in another story, the Sun said Dewani “confessed to being bisexual and sleeping with male hookers”. And in the same 100m word sample of general English, the verb “confessed” is even more linked to crime than the verb “admitted”.

The Mail on Sunday, meanwhile, breathlessly reported that “in a dramatic opening to his long-awaited trial, Dewani pleaded his innocence but revealed he is bisexual and saw male prostitutes”.

It’s that little exception-negating word “but” that gives the game away. Everything after it casts doubt on what came before: Dewani may say he is innocent, but surely we can’t believe someone who is bisexual and patronises male prostitutes. 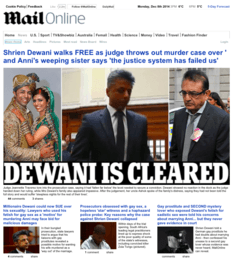 How the Daily Mail covered the case’s end.

A Mail headline on the day of the trial’s end blamed “prosecutors obsessed with gay sex” for the case’s collapse. That’s rich, since the press seems just as fixated.

The Sun’s October 8 edition told of “a British parliamentary aide who claims he had gay sex with honeymoon murder suspect Shrien Dewani …” Considering we know Dewani is male, and the parliamentary aide is male (by that pronoun he), telling us the sex they had was gay is redundant, and making it needlessly explicit only speaks of a prurient interest. How many times do we read about people having “straight sex” in similar news stories (especially when it’s obvious from the context)?

Bisexuality and homosexuality actually get relatively little attention in the media when compared to heterosexuality, which is of course so ubiquitous it doesn’t warrant a qualifying adjective. Left unspecified, “sex” simply means “straight sex”. And since journalists write about gay sexuality so rarely, these glaringly marked examples have a worryingly major impact on our culture’s view of gay people.

Ultimately, the reporting of Dewani’s personal life proves that much of the media still codes gay sex in the prurient, smirking vocabulary of the 1980s. Clearly there’s a long way to go yet.