Become a Member
Ad
“Can you love your neighbor as yourself, and at the same time knee him in the face as hard as you can?” American Christian Mixed Martial Arts (MMA) champion Scott “Bam Bam” Sullivan wonders in an interview with The Times (London).

Today over 700 evangelical US churches now integrate MMA (also known as cage-fighting) into their ministry programmes. The phenomenon has even been featured in a recent documentary film, 2014’s Fight Church.

MMA is a combination of kickboxing, Brazilian jiu-jitsu, Greco-Roman wrestling and Thai boxing. Fighters face off against one another, brutally inflicting pain by punching, kicking, kneeing, and elbowing their opponents into submission. The intensity of the sport’s violence caused Senator John McCain to call for an outright ban on MMA in the US. He denounced it as “human cockfighting,” a “blood sport,” and a “blood bath.”

The trailer for the documentary Fight Church.

The notion that MMA and Christianity are compatible bedfellows is loosely based on the ideology of Muscular Christianity, a mostly-male, Victorian-era movement that linked the gospel with physical and mental toughness. Two leaders of the movement – Charles Kingsley, a clergymen and scholar, and Thomas Hughes, a celebrated Victorian era author (and boxing coach) – sought to counter the perceived feminisation of church and to attract men to the faith.

The muscular Christian ethos was instrumental in the birth of modern sport, particularly in late 19th century British public schools. However, there was a marked decline in an institutional sport-faith link, which lasted until the 1950s. Then Protestant Christian leaders like Billy Graham saw sport as a potential evangelical tool and rekindled the church’s promotion of it.

Since the mid-20th century numerous sport ministry organizations have been formed, such as the Fellowship of Christian Athletes in the US and Christians in Sport in the UK. 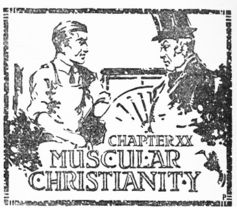 Like their Victorian forefathers, these organizations champion sport as a way to attract young men to faith in an age when the decline of church male membership has been well-documented. Yet MMA religious communities have refashioned Muscular Christianity to a new level of high-octane biblical masculinity.

“Jesus Didn’t Tap,” they proclaim, referring to the act of submission.

Can violence and scripture be reconciled?

It’s this perception of “Jesus as fighter” that is at the heart of the Christian MMA ethos, one eagerly embraced by Mark Driscoll, a well-known, US-based evangelical pastor and MMA supporter.

A moment’s theological reflection, however, raises a host of ethical quandaries and paradoxes for the theologian or thoughtful Christian.

Core biblical teachings challenge the uncritical acceptance and justification of MMA. According to the Bible, humans are made in the image of God – imago Dei – and thus, in the sight of God, human personhood has incredible grandeur and dignity. Second, the centrality of the call to non-violence in the teachings of Jesus seems to be fundamentally incompatible with MMA. Finally, if the body is the temple of the Holy Spirit (1 Cor. 6:19), what would be the theological basis for the acceptance of brutal and intentional violence against the body and soul (Matt 6:22-23) in MMA competition?

In addition to the theological objections to MMA, there’s a wealth of medical evidence that demonstrates the risk of traumatic brain injury, psychiatric conditions, concussion, irreversible neurological dysfunction and even death. Both the American Medical Association and the British Medical Association have repeatedly called for a ban on boxing and, more recently, MMA.

In response, advocates of MMA and boxing often champion the “character-building” qualities of the sport, suggesting they can foster discipline, a strong work ethic, respect for self and others, and offer “anger management therapy” for alienated young men.

Those in the pro-MMA (and boxing) camp are also quick to point out that deaths, in absolute terms, are higher in other high-risk sporting activities, such as sky diving, rugby, American football and horse racing. But what differentiates MMA (and boxing) from these other sports is that the principal aim within the rules is to inflict violence on one’s opponent to win. Conversely, while a participant playing American football or rugby could be seriously injured (or killed) from the sport’s inherent violence, the intention (ideally) is to merely stop the opposing player from advancing into one’s own territory.

Nonetheless, contradictions abound. When considering the theological and medical evidence and the principal objectives of MMA, how can Christian MMA participants use scripture to justify their actions? What do they make of the fact that many other sporting activities are physically demanding, involve physical contact, and can assist in character development – but do not involve intentionally beating one’s opponent into submission? How do they reconcile their faith and the health risks of this brutal sport: brain bleeds, varying levels of concussion, death, emotional trauma and a hardening of heart?

Before a recent bout, I pressed Pacquiao about the apparent conflict between his devotion to the God-man who insisted that we turn the other cheek and his concussive craft. There was a silence. I was worried that I stepped over the line and said, “I’m sorry if I offended you with that question.” The Pac Man responded, “No it is a good question. I think it is wrong that we try to hurt one another, but I also think that God will forgive us (him and his opponent) because it is our calling.” I could have pushed, “But why would God give you a calling that was sinful?” but instead I back peddled and left it at that – that is, at ambivalence.

Yet for other religious boxers and Christian MMA fighters, the ambivalence is lost. Pastor John Renken is a modern-day muscular Christian and founder of a Nashville church called Xtreme Ministries. MMA, he argues, acts as a manly expression of devotion. It’s a place “Where Feet, Fist and Faith Collide.” 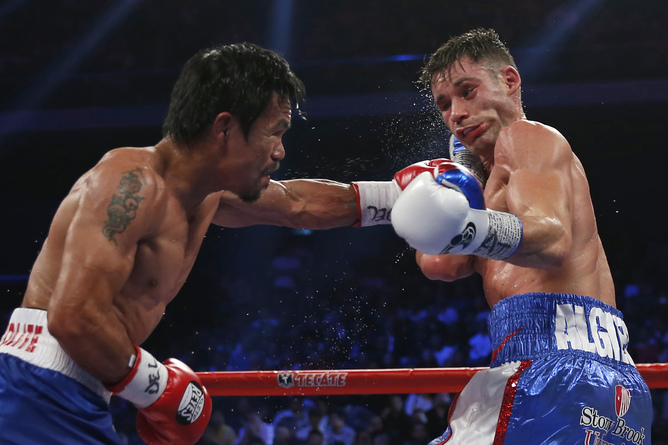 ‘I think it is wrong that we try to hurt one another,’ boxing champion Manny Pacquiao once said, ‘but I also think that God will forgive us because it is our calling.’ Tyrone Siu/Reuters