Contribute Now
Ad
The excitement that accompanied the beginning of the Arab Spring has now largely died down, as a timeworn truth reiterates itself: when an oppressive power is toppled, a similar or worse one will often take its place.

Situations of this kind will be familiar to most. Inspired by an outbreak of protests against police and government brutality in Tunisia in late 2010, neighbouring countries were swept into a wave of unrest that lead to the ousting of many long-established autocrats. In almost every case this tide of humanitarianism reversed when the protesters turned against one another, or militants stepped into the power vacuum.

Cultural reactions to this situation, especially in literature, have been strong. The early protest poetry emerging from this region was simple, direct, and often angry. A prime example is the late Egyptian poet Ahmed Negm’s The Brave Man is Brave, which was chanted by the crowds that gathered in Cairo’s Tahrir Square in 2011:

The brave man is brave
The coward a coward
Come down with the brave
Down to the square.

But the dominant tone is now generally one of bitter disappointment. Poets of the Arab Spring, especially those who have been driven as exiles or refugees into Western countries, are now focusing their attention on the failures of political experiment. The work of a large number of these has been collected in an online database published by Al Jazeera, Artscape: Poets of Protest.

The work you can read there is more than enough evidence that the protest literature which emerged from this region a few years ago is now cooling and hardening into quieter work. Poets are now searching out a literary solution to their crisis in the absence of a political one.

This literary and political dilemma closely parallels one from early 19th century Britain, in the aftermath of the French Revolution. In both cases, well-established, oppressive regimes were swept away amid a flood of optimism. This receded when, as English professor Fiona Stafford writes, the “ensuing bloodshed, power-struggle and war … rapidly destroyed the hopes of the young [political radicals]”.

Among the ruins, progressive poets like William Wordsworth wrote with the same combination of dejection and resolve visible in the poems of the Syrian exile Hala Mohammad. Her long poem in remembrance of the Syrian activist Ghiyath Matar, who was killed in September of 2011, repeats the following brutal refrain:

But how to move on, and recover from the lost hope of previous poems? 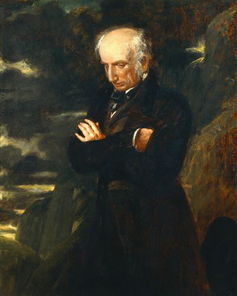 The most enduring Romantic solution to this was Wordsworth’s, profoundly expressed in his massive autobiographical epic The Prelude. The endless wars and terrorism which followed the Revolution’s early fervour were the shock of the poet’s life. It wasn’t until more than 30 years later that in this attempt to console the dejection of his longtime friend and fellow radical, Coleridge, Wordsworth offered his artistic solution to the political crisis. “There are in our existence spots of time,” he writes in The Prelude:

Which with distinct pre-eminence retain
A fructifying virtue, whence … our minds
(Especially the imaginative power)
Are nourished, and invisibly repaired.

This “imaginative power” which comes from writing poems “nourishes” and “invisibly repairs” our minds. That power was Wordsworth’s comfort — and a cold one, he admitted, for men who still wanted to “thrust themselves upon this passive world | As rulers of the world”. But before any healing could begin, this political scepticism had to be accepted.

Wordsworth had seen the cold algorithm of political upheaval applied firsthand: that the will to rule by force was inevitably poisonous even for the noblest ideologue. But the will to create, along with the empathy inspired by poetry, was a healing power, tonic for minds poisoned by war. This new vision for art, he hoped, could spur Europe toward an era of more humane sociopolitical change.

Stepping back from violence

The regions affected by the Arab Spring are in need of a similar recovery, and it will be up to the poets of those nations to calibrate their involvement in it. But like the British Romantics of the early 19th century, the “protest poets” of the Arab Spring are gaining strength, sophistication, and notoriety even while their political ambitions fade.

As she processes the stagnation of Syria’s political hopes, Hala Mohammad’s poetry has begun to increase in complexity, soften in tone, and shift in imagery. Her poem The Swallow is altogether different from her jarring and repetitious poem on the death of Ghiyath Matar:

With the feather in the
window, Swallow,

we adorned
the martyr’s picture

and death flew out of the picture.

Slow down, Swallow.
The nest belongs
to whoever builds it.

Notably, the martyr is not avenged, but remembered. And the conclusion of the poem links the security and comfort of the “nest” to the process of poetic construction: “whoever builds it”.

The change in Mohammad’s poetry seems to signal a trend. In poems like Yehia Jaber’s “Nightmare”, readers are encouraged to laugh at the human propensity to see hope in something as mundane as a kitchen, or terrible as a war, and remain loyal to that hope in spite of political disappointment. Jaber writes:

The couplet insists that the writer is “not mad” hinting that he is beginning to understand himself as a visionary whose art can provide unity and relief. It is a Wordsworthian claim, and one that suggests a Romantic shift among the Arab Spring poets, away from a poetry of protest and toward literature that is a force of healing by itself.