Contribute Now
Ad
The adivasis of Chhattisgarh’s Dantewada district consign to flames the body of a dead adult. But Budhri Nuppo decided not to cremate her husband Budhram. His body has been buried, she said, in the hope that one day it would be exhumed for the purpose of an enquiry that would nail the lies of the police.

Budhram was shot dead on January 6 in the forest outside Revali village where he lived with his wife and five children.

In the morning, as the village stirred to life, the couple decided to go to the forest to collect wood for the fencing of their house. After working for a while, Budhram took a break, stepping into the waters of Malger nala for a bath, while Budhri continued to work. Soon, she heard gun shots. Scared, she hid behind a tree, watching gunmen in khaki uniforms fire in the direction of her husband.  Gathering strength after a brief lull of silence, she ran back to Revali.

In the village, she was told that the gunmen had already passed through Revali. They came from the direction of Burgum village around 8 in the morning. Entering the hamlet of Patelpara first, they beat up Mangdi Markam and her mother as well as Payke Nuppo. From Nanda's house, they looted Rs. 200 and a torch light. From Pisey's house, they drank a jerry can of mahua and stole two handis of the liquor. Then, they moved onto the hamlet of Tadpara, where they took away Rs 300 and a cooking utensil from Deva’s house, Rs 200 and a hen from Hunga’s house, and a hen from the widow Malle’s house. 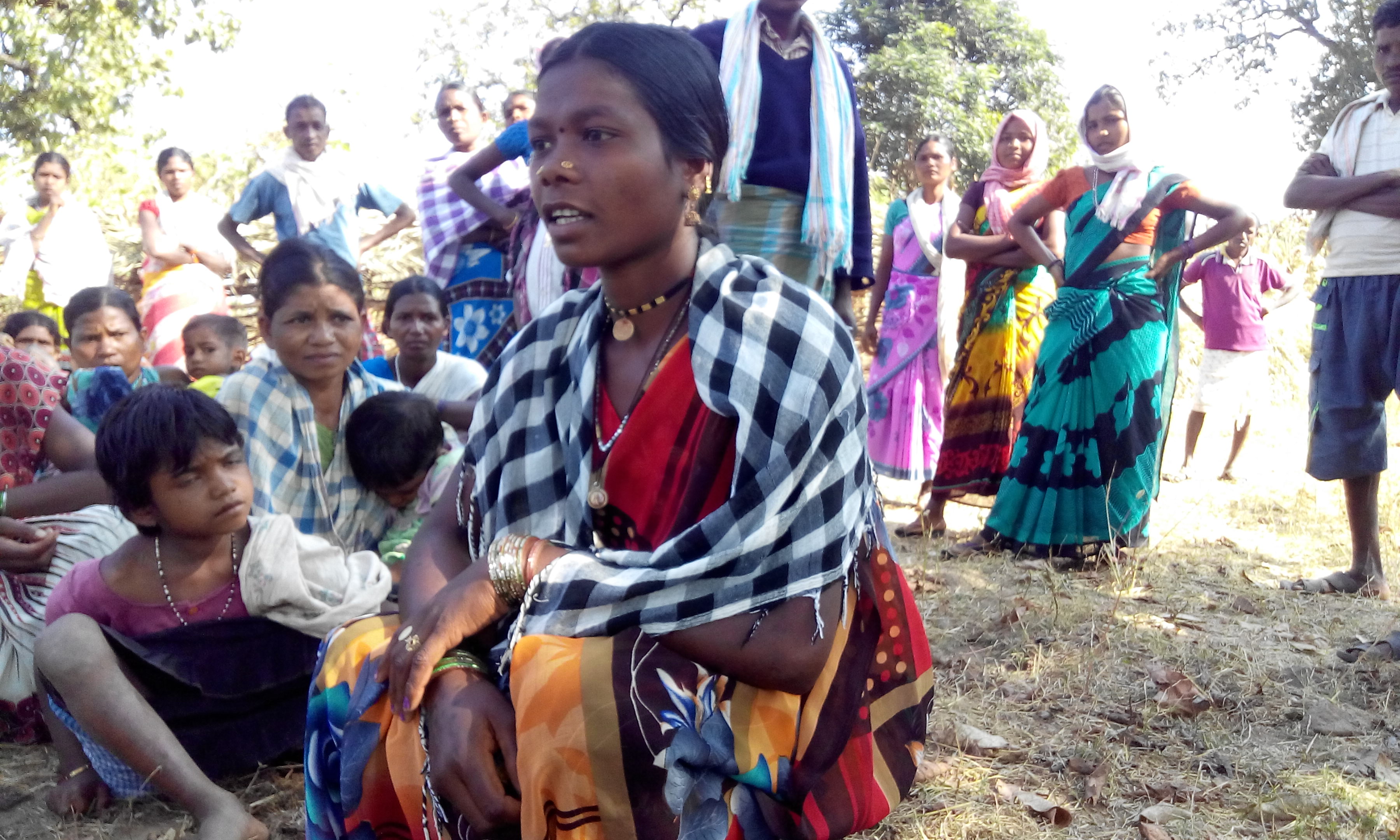 Payke Nuppo alleged that she was beaten up by security forces.

When Budhri went back to the forest with other villagers, they found Budhram’s body, riddled with two bullet wounds – one near the left eye and the other on the right side of the waist.

It took long to arrange a vehicle from the nearest town. It was only the next day that Budhri managed to travel 30 kilometres to reach the police station of Kuakonda with the body of her husband. She was accompanied by the village sarpanch, Deva, the ex-sarpanch, Rakesh, and three women.

Only the women were allowed inside the police station. Since they didn’t speak Hindi, the station supervisor, Sharad Chandra, asked an adivasi constable to act as the translator. While translating, the constable asked Budhri how sure was she that her husband had not been killed by the Maoists. Budhri pointed to Chandra, the police officer, and said that the gunmen wore uniforms very similar to his. The statement was noted and Budhri and the women were made to put their thumb impressions. Meanwhile, Budhram’s body, which had been taken away for a post-mortem, came back without any incisions.

The next day, when they accessed a copy of the first information report, the villagers were taken aback to see how Budhri's statement had been distorted. The FIR said Budhram’s murder had been committed by unknown Naxalites. But all the villagers that I spoke with identified the gunmen as “force waale”, which is shorthand for the government’s police and paramilitary forces. The villagers’ accusations aren’t illogical: Revali falls in the area where Maoists seek to bolster support for their armed movement. It is unlikely that an armed group enlisting support would go about alienating the civilian population by killing people randomly. The state’s security forces, on the other hand, view villages in the area with antagonism since they believe the rebels operate with the support of local people.

Caught in the crossfire, 5,000 people from 20 villages gathered on January 16 in Arbe village, not far from Revali, to demand justice for Budhram. The protest had been mobilized by Soni Sori, the activist who had contested the 2014 national election on an Aam Aadmi Party ticket. After a series of angry speeches, in the afternoon, the men and women, the young and old, began to march to Dantewada, about 60 kilometres away. 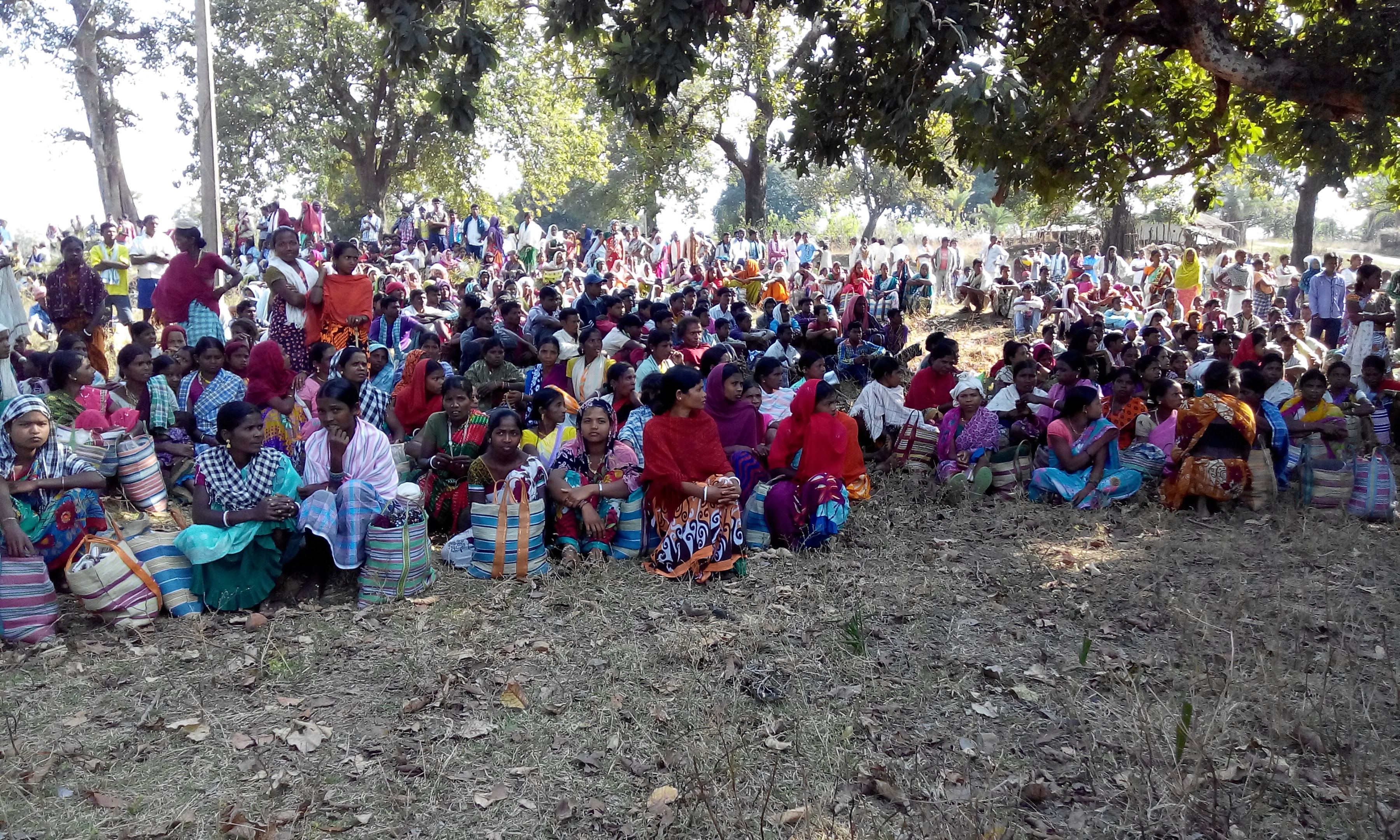 The protestors wanted to submit a memorandum of demands to the district collector. They were asking for a judicial enquiry into Budhram’s death, Rs 15 lakhs as compensation for Budhri, the coverage of the education expenses of her children, and compensation for the others whose money and material was stolen by the security forces. Additionally, they wanted the district superintendent of police to register a fresh FIR, hand over the case to CBI, as well as disclose details of the movement of security forces and the ammunition spent that day. Such details would help establish the culpability of the security forces as would the post-mortem of the body.

Anger in their stride, the villagers marched with utensils, halting for the night near Palnar, where the police tried to intimidate them into returning to their villages. But they carried on the next day, reaching the town of Kuakonda where in the afternoon, the sub-divisional magistrate of Dantewada arrived to negotiate with them on behalf of the collector. After much discussion, he extended an assurance that he would hand over their letter to the collector and “appropriate action as per norms” would be taken within ten days.  The villagers returned to their villages tired and disappointed. 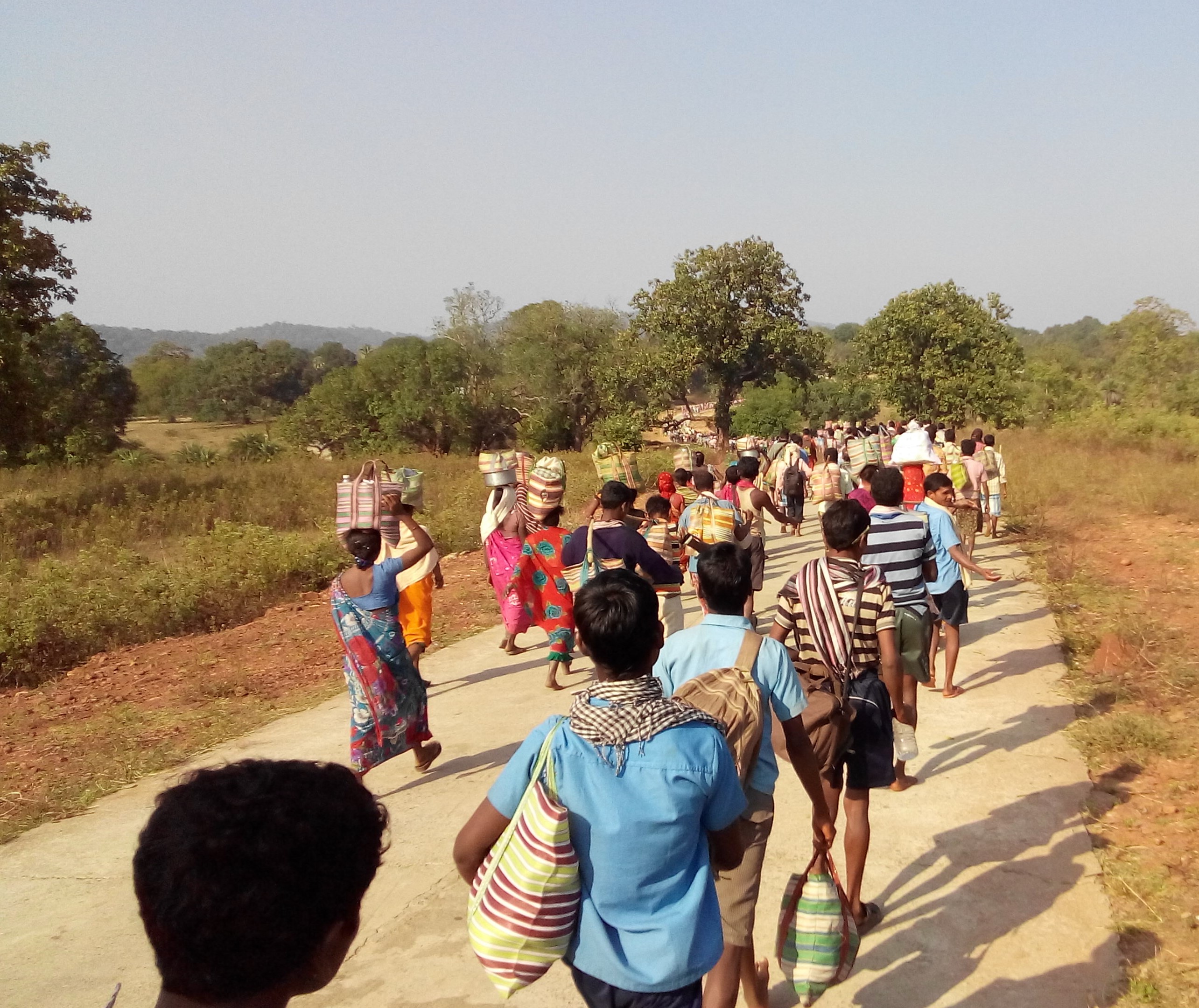 The protest march took up more than five kilometres.

As this report is being filed, Budhri has been called to pick up her compensation cheque. But there is no word yet on a judicial enquiry. “Prima facie there is no evidence to conclude as to who killed him,” Dantewada collector K.C.Devsenapati told The Hindu. Dantewada's superintendent of police, Kamalochan Kashyap, speaking on phone, told Scroll that the villagers in Revali had been "motivated" by the Maoists to level false allegations against the police. He admitted that a joint security operation had been carried out by the district police and the central paramilitary forces in the area near Revali in the first week of January, but he claimed the forces were not near the village the morning Budhram was killed.

Activists say that the compensation given by the state is often simply aimed to cover up the lapses of security forces. As this report in The Times of India explains, Chhattisgarh’s scheme for compensation for civilian killings only covers “death by Naxalites”. The state lives in complete denial of the civilian deaths at the hands of its own security forces.

In the face of such disregard and callousness on part of the state, it is amazing that villagers still march to its offices to seek justice. But every time the state does not respond to their demands, it loses the opportunity to win their trust.

Budhri, a frail looking woman, has shown extraordinary strength. To keep the chance open for a thorough investigation into the murder of her husband, she had decided not to cremate his body, burying it instead, so that one day it can be retrieved for a proper post-mortem. 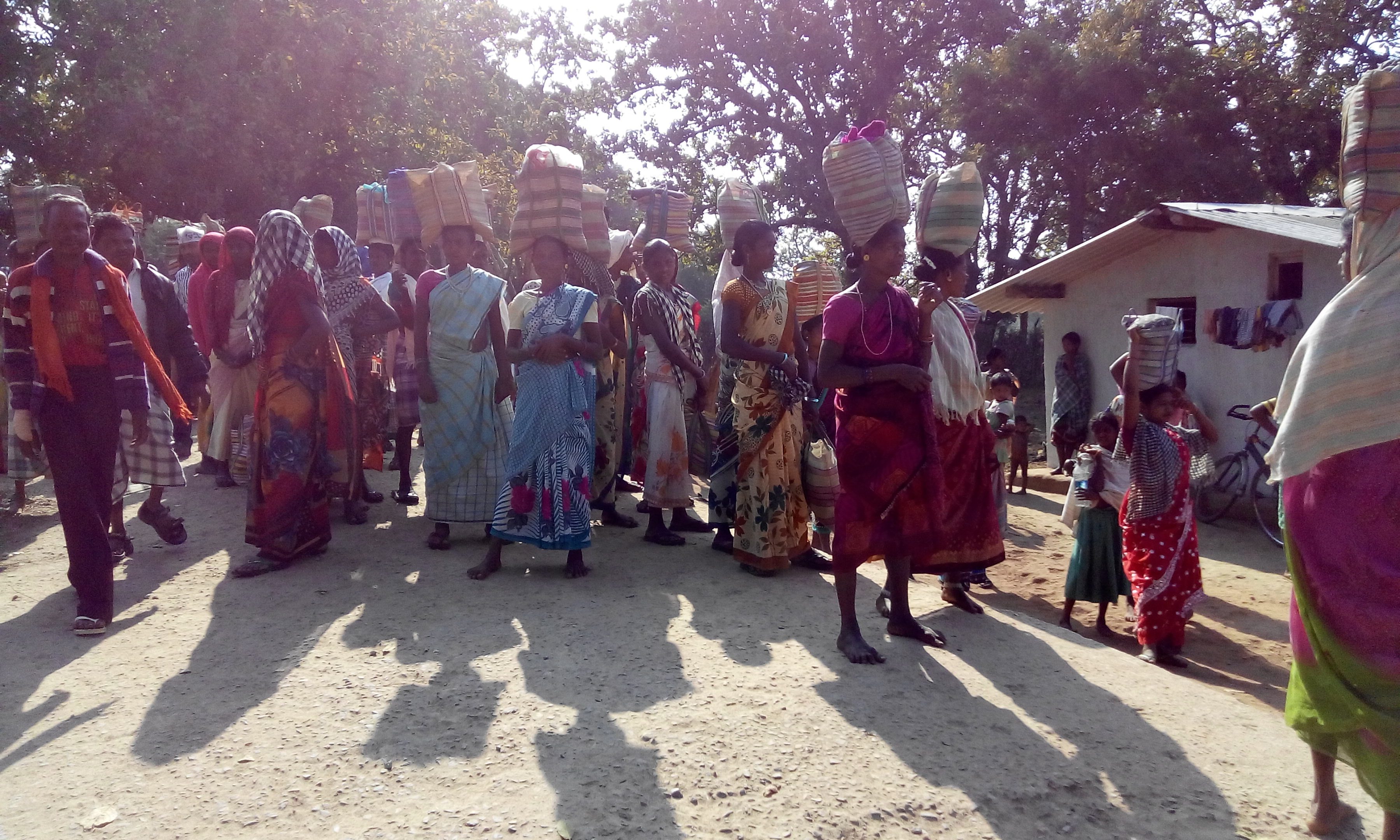 Women participated in the protest march in large numbers