Contribute Now
Ad
When I started looking to rent a one-bedroom apartment in Bombay about two and a half years ago, I had a short list of specifications:

1. It needed to be semi-furnished.
2. I needed ceilings high enough that I wouldn’t have to crouch. (Being six feet tall, average-ish in New York but tall here, this is surprisingly not a given.)
3. I needed at least some natural light.
4. I needed a kitchen.

It was this last request that flummoxed my brokers. I saw several places that had a mini-fridge and a single hot plate in lieu of a kitchen. When I explained I needed someplace to cook, the broker would look at me ‒a single, twenty-something man ‒ and say, “Yes, you can cook. Chai and Maggi.”

The Swiss brand Maggi (owned by Nestlé) makes a variety of products ‒ including bouillon cubes, various Asian-type sauces, and powdered soups ‒ but in India the word is essentially synonymous with “2-Minute Noodles.” Maggi noodles first appeared on the market here in 1983, and over the next 25 years, they enjoyed a 90 percent share of the instant noodle market (that share has dropped in the last few years, thanks to the introduction of other brands like Top Ramen and Wai Wai). It became, as Mumbai-based advertising expert Kiran Khalap said in an interview with Afaqs, an online resource for Indian marketing and advertising firms, the “third staple” of Indian food after wheat and rice. Today, India is by far Maggi’s largest market for instant noodles. 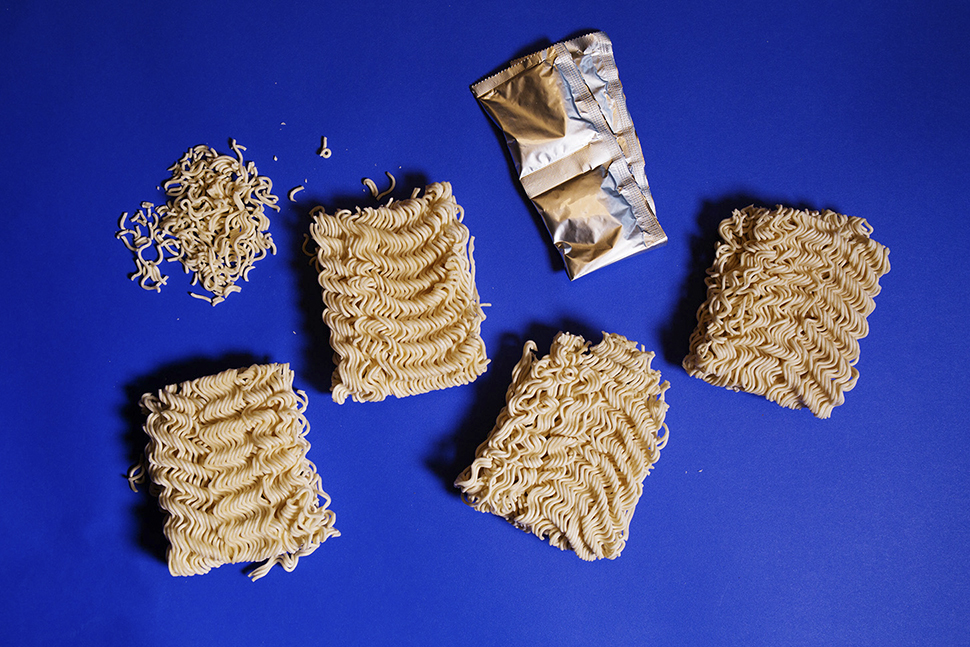 Thanks to India’s proximity to China and Nepal, noodles have been a part of the urban Indian diet for some time. Calcutta’s famous Chinatown has served noodles and dumplings for ages (though quality has declined in recent years) ‒ and the Mumbai-based food writer Vikram Doctor told me that when he was young in Chennai, he would often end up eating at cheap Chinese joints, which were the few places that served both vegetarian meals and alcohol. The marvelously named Wanton House [sic] down the street from my place in Bombay made its name on the same combination when it opened in the 1960s.

But none of that makes Maggi’s ubiquity on the subcontinent today any less weird. No matter where you go, no matter how remote a village, no matter what region of India, you will find Maggi 2-Minute Noodles. I’ve eaten them at a Himalayan checkpoint called Poo on the contested border with Tibet, and I saw them for sale at a shop in a South Indian hillside village called Vellagavi, a six-hour round-trip hike from the nearest road. In her book Armies, Wars and Their Food,Vijaya Rao describes something called the “Siachen Omelet,” a concoction made by soldiers stationed 20,000 feet above sea level on the Siachen Glacier along the contested border with Pakistan, often described as the world’s highest battlefield. The omelet consists of powdered eggs stuffed with cooked Maggi noodles, two of the only foodstuffs that can survive at that altitude. While people in Bombay and Delhi and Calcutta may have known noodles before Maggi, places like these definitely didn’t.

Maggi products were first invented in the mid-nineteenth century in Switzerland (of all places) by a guy called Julius Maggi. According to Maggi’s official (and grammatically tortured) account of its own corporate history,

“In 1863 Maggi created a recipe of flavours to bring added taste to meals. […] Known for his nutrition-oriented approach, the Swiss Government asked Julius Maggi to create a product that would be quick to prepare yet nutritious as more and more women were working outside the home. The results were a success ‒ two instant pea soups and an instant bean soup.”

Maggi’s target audience in early 1980s India was much the same. In its first ads, the brand popularized the image of the “Maggi Mom”: she cared for her children as much as the more-traditional Indian mother, but, as a modern working woman, didn’t have the time to make time-consuming curries. Kids loved Maggi; moms lovedmaking Maggi. It took only “2 Minutes” (a phrase used in India to mean, “like, pretty soon,” i.e., anything from now to twenty minutes from now). It was purportedly healthy. Maggi released flavors specially tailored to the Indian market ‒ particularly “Masala” flavor, whose spice packet has become a popular seasoning in its own right (a chef friend of mine told me that he sometimes uses it as a quick marinade for chicken).

Today Maggi relies on nostalgia to keep ahead of the growing instant noodle competition. In 2008, Maggi introduced a new ad campaign for the brand’s twenty-fifth anniversary in India. Titled “Me and Meri Maggi” (Hinglish for “Me and My Maggi”), the campaign solicited personal stories from Maggi eaters and re-created them for a series of ads aired across the country. The campaign is treacle-sweet sentimentality of the first order: there’s a bride eating a bowl of Maggi in her wedding dress and a kid eating it on a camping trip and a guy soaked to the bone carrying bowls of the stuff to people stranded in their cars during the 2005 Mumbai floods.

Maggi used to belong to the working woman and her brood of happy, hungry children (who in the early commercials are smiling aggressively and chanting for “MAGGI MAGGI MAGGI” with frightening vehemence); today it is the staple of bachelors, college kids, and young professionals. They’re the Maggi kids all grown up. An acquaintance of mine working in an advertising firm recently tweeted: “If post 7 PM you walk into an ad agency and it doesn’t smell of Maggi you have probably not walked into an ad agency.”

But the Meri Maggi ads also tap into something essential about Maggi’s peculiar place in India’s collective consciousness: everyone in India ‒ and I mean practically everyone ‒ has his or her own Maggi story, Maggi memory, and Maggi recipe. According to the communications team over at India’s Maggi Headquarters in Delhi, the annual Brand Equity Survey ranked Maggi the Most Trusted Food Brand in India in 2014, while WPP’s Millward Brown Survey ranked it the Most Powerful Brand in India. Neither survey result surprises me.

When I posted the following question on Facebook ‒ “How do you pimp your Maggi?” ‒ I received over thirty responses (some of those responses are included below). Even adults well into their thirties admitted to indulging in the occasional Maggi (usually when stoned or drunk or in transit, more or less the same circumstances under which I’m likely to eat Chicken McNuggets or a Dunkin’ Donuts breakfast sandwich).

In a country with twenty-two official languages, hundreds of dialects, more ethnicities than you can count, and a host of racial, religious, cultural, and economic divides so immense that they make the U.S. look like Norway, the universality of this cheap processed pseudo-food is no small thing. Flags and national anthems and legal codes are ultimately abstractions. Maggi noodles may just be the closest thing that the modern nation-state of India has to a tangible, unifying reality. 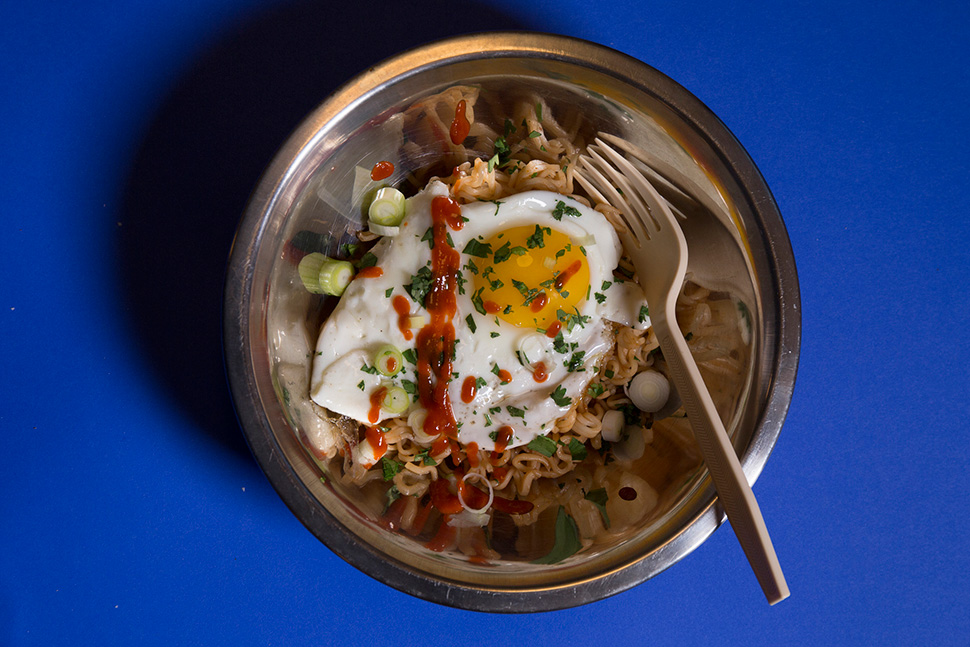 Alok Gupta: OMG this is the best question ever. I eat my Maggi – ok no judging please, with Bhujiya and Ketchup. It’s so yummy yummy that way.

Neerja Razdan: Oh man every Indian kid in America grew up on that stuff. We weren’t allowed to eat it often. I think the last time I had it was once or twice in college, with egg dropped into it (protein) and added frozen vegetables.

Clover Wootton: A friend of mine eats hers dry and uncooked, as namkeen.

Manish Modi: I eat Maggi when my wife cooks it, especially when she does not feel like cooking a full meal. She cooks it with veggies. We eat atta [whole wheat] magi and avoid maida [white flour] Maggi. I think masala is our favourite flavour. Maggi is not the most fantastic food in the world, but if you add enough veggies, I suppose it is OK once in a while. (Meaning once in months!).

Mary Storm: Only in Spiti and Ladakh. Stuff only tastes good over 10,000 feet.

San Durrani: This has always been an emergency-when-nothing-is-available-while-travelling (say in the mountains) kind of food item for me. I ask them to prepare it typically Indian style with cut green chilies, tomato and onions. Oh and may I add I am referring to Maggi noodles noodles noodles…slightly soupy and definitely above 10,000 feet.

Jaymin Dalal: Maggi masala, at midnight usually, or post drinking session. I pimp it up by putting 3 tablespoons of amul butter and an egg. I ate a lot when growing up, four times a week. Now it’s like twice a month. School, college, summer vacations were all about Maggi!! Oh god I am craving it now.

Gresham Fernandes: Plain or with meat. Next day sautéed and topped with something hot. Eat it cold, eat it like ramen, use the spice pack to marinate chicken. Endless. Pureed when really sick and don’t feel like chewing. Everyone has a different version. It’s the bastard that can become anything.