Jan 26, 2015 · 12:57 pm
Supriya Sharma
Around 10.50 am on the morning of Republic Day, as images from the parade on Rajpath streamed live across TV channels, IBN7, the Hindi news channel which is part of the Mukesh Ambani-owned Network 18 group, chose to insert a black and white image into the coverage.

“Take a look at this picture,” said the anchor, “This is Kiran Bedi leading a contingent during the Republic Day parade.”

Kiran Bedi is the Bharatiya Janata Party’s chief ministerial candidate for the upcoming Delhi assembly elections. The picture was evidently from her early years as an officer of the Indian Police Service.

US President Barack Obama’s visit comes in the middle of a high-stakes election for the Delhi state assembly. For the BJP, this election is important enough for it to jettison old loyal party leaders and bring in a rank outsider like Bedi to undercut the appeal of Arvind Kejriwal, her comrade from the anti-corruption movement. The attention of the national media was singularly focused on the Bedi-Kejriwal battle until Obama arrived.

Commenting on the shift in media focus, a report in Firstpost said, “The BJP, however, is rather upbeat about it because they believe that Obama's visit will give Modi and the BJP additional political mileage. A very high-profile Obama visit will give Modi an opportunity to figure prominently in public discussions. Beginning Sunday morning, when Obama arrives in New Delhi, and till he departs on Tuesday, all eyes and ears will be focused on him and all debates, structured or otherwise, in TV studios will be centred on the diplomatic coup pulled off by Modi in getting Obama to be chief guest at the R-Day parade. So even as Modi is off campaigning in Delhi, he will very much occupy mindspace.”

The media coverage of the Obama visit has gone to script with most leading TV channels and newspapers overstating the outcomes from the meetings on Sunday. To most readers, it would appear that Modi has signed a new nuclear deal with Obama which would bring much benefits to India while all they have done is iron out differences on the nuclear liability law which, according to some commentators, might only be detrimental to India's interests.

But the fine print of the discussions matters less to Delhi elections than the public display of "chemistry" presumably shared by a muscular prime minister with a major international leader.

On Monday, the BJP candidate from Tilak Nagar in west Delhi roped Barack Obama into his campaign. 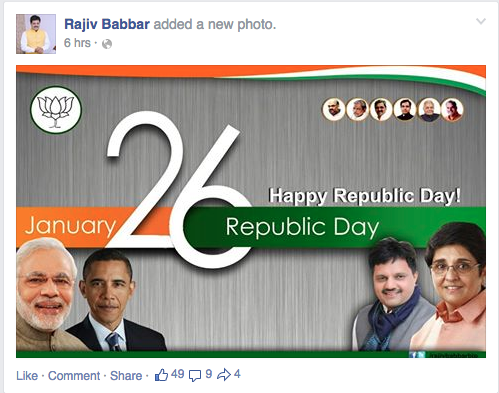 To BJP's quiet satisfaction, as if the relentless focus on Modi was not enough, the Republic Day coverage also accommodated Kiran Bedi. While the national broadcaster Doordarshan, which has exclusive rights to the coverage, showed Bedi among many others attending the parade, private news channels like IBN 7 obliged by going one step further in drawing attention to her.