Contribute Now
Ad
My passport is the most Pakistani thing about me. But when I clutch it as I approach border agents, I make sure the cover, with my country's seal, faces downwards. No need to scare the grandmother next to me. Yet the green seeps out of my palm.

My passport was of the older variety, not readable by machines. Border agents had to pore over the trilingual document, with its Arabic, English and Urdu, to hunt for data such as my birth date and the expiry date. Eagerly, I would point them to the right pages. This intrusion into their domain was rarely met with a smile.

I needed to get a machine-readable passport.

My father once told me about his passport, which he got in 1967. He had won a scholarship to study engineering in Ankara. He recalled it being a laborious process and taking a long time to acquire. He had saved it, as he had all of his passports. I got hold of it once and saw that its yellowed pages had strange-looking stamps and hand-scribbled notes of entries and exits.

The passport is in English, Urdu and French. The hardcover simply says "Pakistan Passport". The visa stamps say "Turkish Embassy (Rawalpandi)" and the "Royal Afghan Embassy (Rawalpindi)". This must have been the transitional phase when the Pakistani capital moved from Karachi to Islamabad via Rawalpindi.

My father looks dapper in the passport photograph: he is wearing a slim black tie and his oiled black hair is slicked back. On a visa to Dubai, his profession, engineer, has been crossed out and someone has scribbled "senior electrician fitter": the difference between his worth and his work.

On the second page, there is a list of countries to which it is valid, hand-written in a flowery cursive style. The first country is the United States of America. 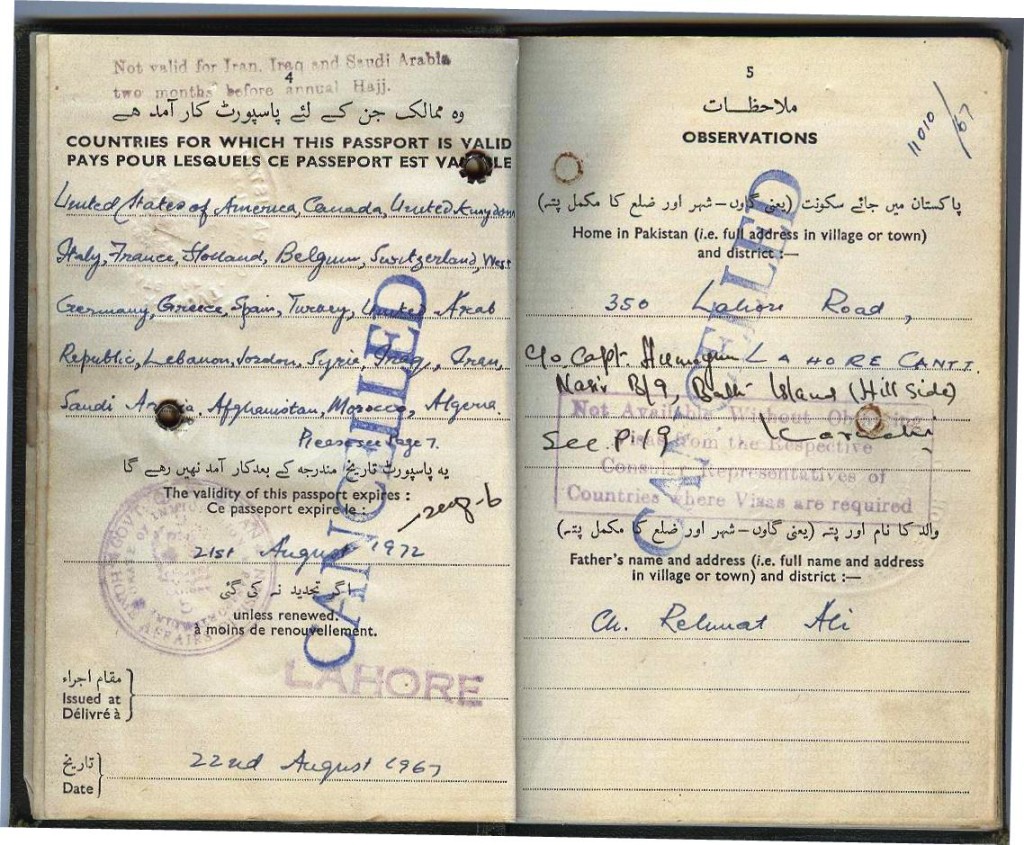 His 1974 passport contains Bangla. The script had lingered on even after the people who could read it had been excised. By 1980, in another passport, Arabic had replaced Bangla. The cover proclaimed "The Islamic Republic of Pakistan". It opened left to right. This was the passport of the Zia ul Haq regime.

To get a new passport, a machine-readable one, I go to the passport office in Model Town, which used to be a suburb of Lahore. In his memoir, Ab Wo Lahore Kahan? (Where is that Lahore Now?), FI Chaudhry, who lived in and photographed that city from the 1930s, writes about the hard-to-reach, leafy roads of Model Town.

There was the route along the canal, through gardens and mansions and over agrarian fields. Today, Model Town is almost at the centre of Lahore, which has grown considerably to the south. At 7 in the morning, its roads are crowded. The Lahore office of the Pakistan Passport Authority is based in what appears to be a residential building. 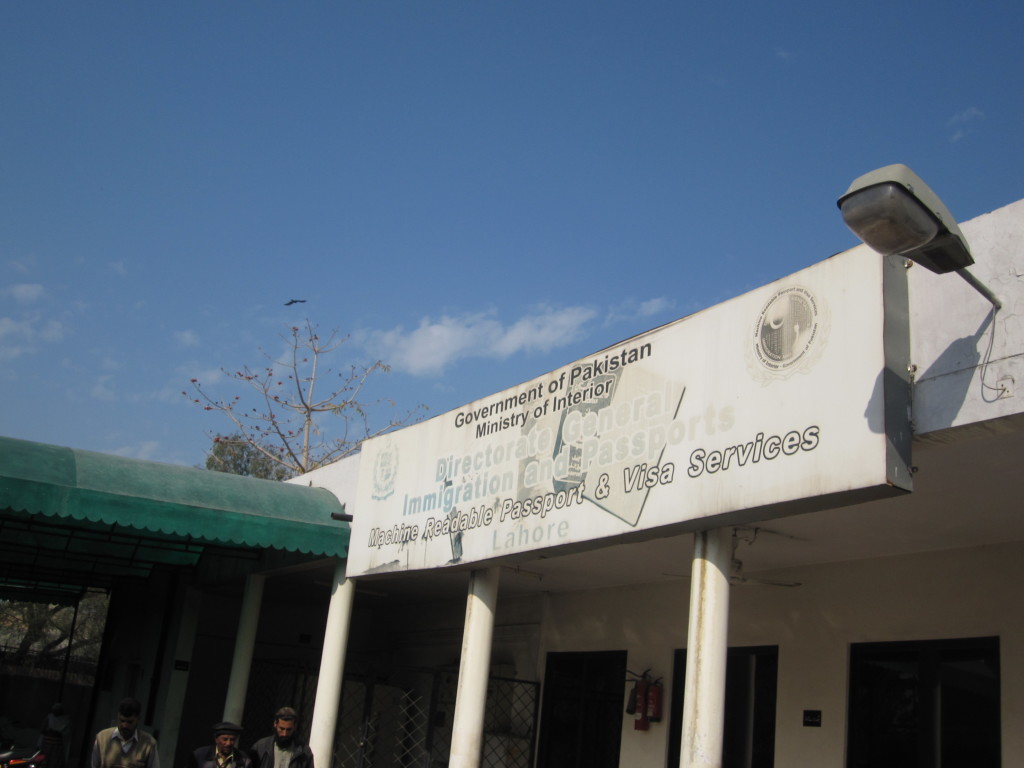 As our car slows down near the passport office, a young man steps swiftly in front of us. "Passport?" He has a clipboard in his hand and a lit cigarette dangles precariously from his lips. He puts his hand on the car's side-view mirror and points towards a parking spot. We get out. "You want urgent?" he asks. "Because non-urgent passports are not being issued. I mean, they will tell you that you can submit fees for it, but don’t even wait for it. Something is wrong with the system." He sighs.

I ask what the full treatment is. "Well, first we have to stand in line at the bank and deposit the fee and get the receipt. Then, you fill out the form and attach the receipt," he says, pointing towards a small wooden desk by the side of the road, on which lies another clipboard and a stapler. "And then go to the passport office. There, you will have to get into another line to deposit the application and get a token number. That number allows you to wait in another line to get inside the building. Once inside, you have your picture taken. It is highly computerised now," he notes with some satisfaction.

"Then you wait for a spot on a machine that has your data. You have had a computerised passport, yes?" I shrug. He grabs my old passport and looks at it, puzzled. I tell him that I got it in Chicago. "Then it must be computerised data," he says. "The database is in Islamabad and sometimes they lose the connection, and then you just have to wait. The connection was out for nearly three days last week. We lost a lot of money. But I have heard that this week the connection is solid."

What happens after that, I ask. "You just have to sign and make sure your name has been spelt correctly. Then they will interview you, have you sign some more forms and give you the receipt with a delivery date. You will be done in two hours." He taps his cigarette on the clipboard. I confer with my companion. Should we just do this ourselves? It doesn’t seem worth hiring an agent. The youngster waits patiently, and after a while suddenly says, "This is out of your league. Just let us do it. We don’t make a whole lot of money. It’s all legal."

I went inside and waited for my number to be called, a process at the end of which I was to receive a stamp saying, "Nothing adverse in our record against the applicant". 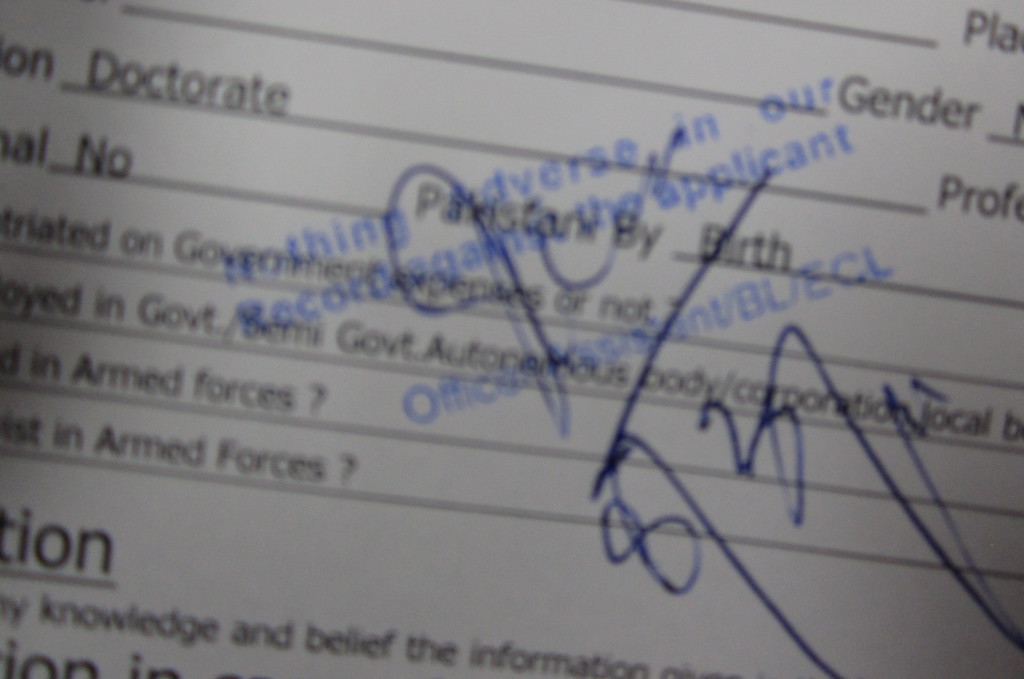 Next to me was a man who told me why he was there, "I work at the garment factory on Patuki Road. We do 12-hour shifts. I am the eldest and I just want my brothers to get their education, you know. I work and work and I have to pay their tuition, and it is more than Rs 5,000 every month. I specialise in shirt-making. The factory is brutal, man. They kill us if we try to ask for a raise or even an extra chicken once a month for our meals."

"They have contracts from abroad and we are replaceable," he continued. "I am hoping that with a passport I can get a job in the Gulf. I do not want to leave my brothers but I have to get out of here. See these pants? I made them. I am a great tailor. I think I can get a job doing tailoring in Saudi [Arabia]. I heard they cut people’s heads off there. What savages man? They have the kali kamli wala (the Prophet) and instead of love, they go around chopping people’s heads off?"

"I was scared because people said that you can get caught in fake drug scams. It is hard being there. But I have to take the risk. I am so good at making clothes. I am sure I can get enough money to send back to my brothers. I never married. I never went to school. I only know work. But I want this for them. You know?"

I did not know. Rather, I did not how in the ways in which he knew. But I did know what it might mean to be dependent on someone else's hard labour, one who will wait for the return of the migrant labourer, one who will continuously try to think through the distance between worth and work.

When my number was called for my picture to be taken, a man asked me to sign a paper that said I believed in Muhammad was the final prophet. I clutched the paper and sat down. This was a way to weed out followers of Mirza Ghulam Ahmad, the Ahmadiyas, who do not believe this. The man looked at me quizzically. To be a passport holder, to claim that one most Pakistani thing that I claimed, I had to deny this right to other Pakistanis. If I did not sign, I was a man without a passport. 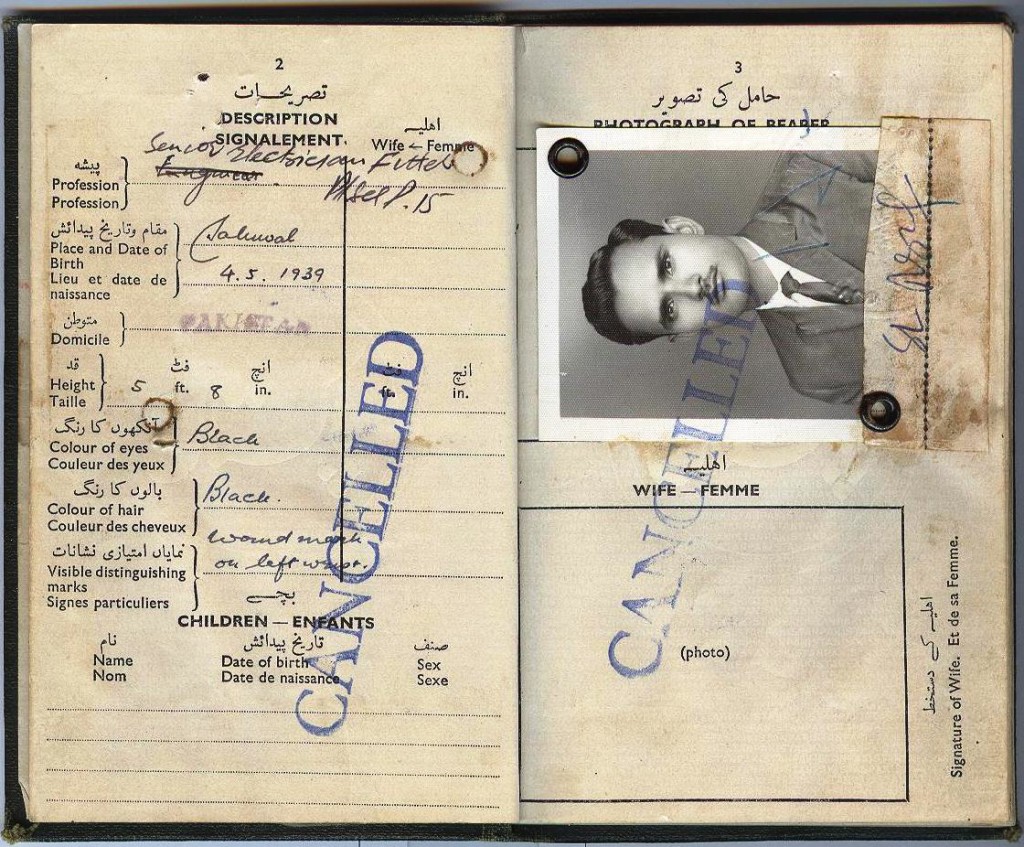 What civil resistance is possible? I imagined scratching away the clause and signing against it. I did not do it because I needed my passport to leave the country and to be admitted to another country. So I signed. 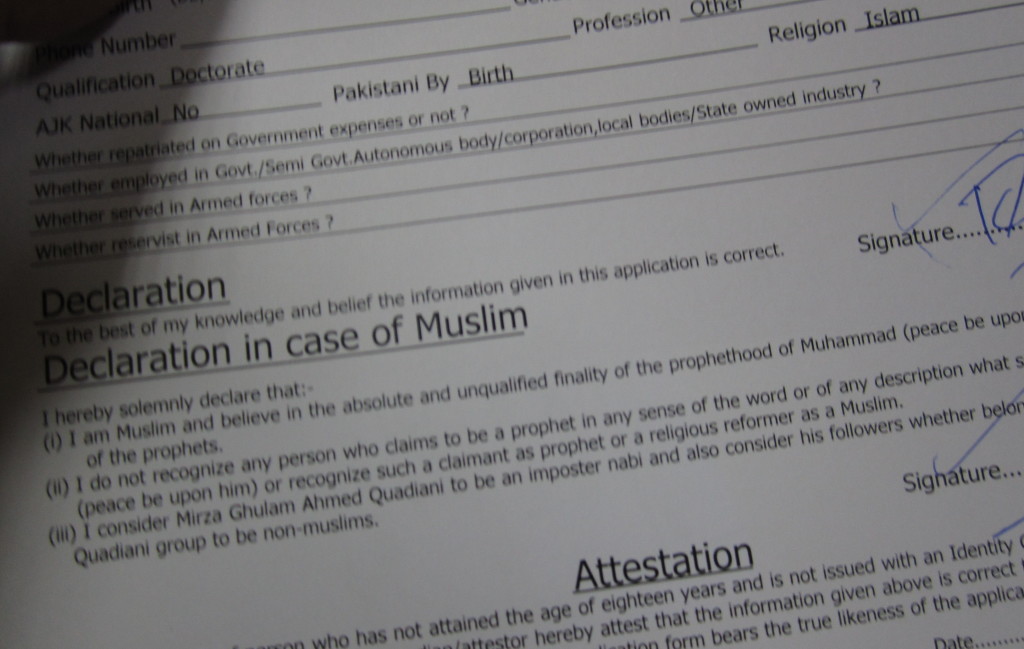 When I came out, he was there, and I quickly walked up to him. Could I get the passport if I did not sign the anti-Ahmadi statement, I asked him. How big was the bribe? He stared at me and walked away. I understood my transgression: the taboo cannot be broken in broad daylight. I am sure there are ways, but I would need to come back to find them.

The author is an assistant professor of history at Columbia University in New York. This article first appeared on the blog Chapati Mystery under his pen name 'Sepoy' and has been republished with the author's permission.