Feb 06, 2015 · 06:45 am
Himanshu Thakkar
The picturesque Zanskar Valley in Jammu and Kashmir is under threat because one of the tributaries of the Zanskar River has been blocked by a massive 200 ft high landslide ‒ equal to height of a 20-storey building). The landslide dam between Shaday Sumdo and MarShun in the Zanskar subdivision of Kargil district has created a lake that is about 8 km long, whose size is increasing every day.

The landslide dam is made of mostly fine-grained debris. While the lake is frozen right now, the threat of it breaching the dam is highly possible as soon as the melting season starts. The landslide dam was reportedly created on December 31, when a whole side of mountain soil landed on the Phuktal River. The landslide lake has been accumulating water for over a month now. 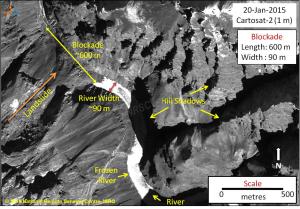 Detailed image of Phutkal Landslide Dam from NRSC on January 20.

This is the second such major event in Himalayas in recent times. The Sunkoshi landslide dam in Nepal was created in August 2014. The cause of the Zanskar valley landslide is not immediately known.

The landslide dam over the fast-flowing Tsarap or Phuktal River (a tributary of Lungnak River, which in turn is a major tributary of Zanskar River) is located near Marshun village, about 90 km from Padum, the sub-divisional headquarters of Zanskar. The last 43 km of the trail to the site is accessible only on foot. The sudden reduction of flow in the river at the downstream Nimo Bozgo Hydropower project raised the suspicion of a landslide and this was ascertained only after a flight over the river path. The earliest news is dated January 17, 2015. The reports indicated than that National Disaster Management Authority was immediately alerted then, but a team from the organsation is yet to reach the location, as per the latest information available. 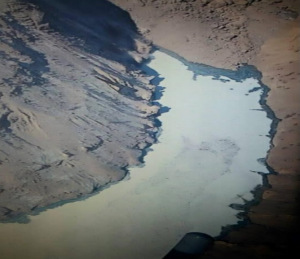 As of January 20, 2015, that dam was about 600 meters long, according to an analysis of satellite imagery collected by the Indian Space Research Organization’s CartoSat-2. The artificial lake that formed behind the dam covered about 55 hectares.

Tourists from all over the world visit Ladakh to trek through famous 150-km-long Chadar route to Zanskar. In addition, people living along the Chadar trail from Leh to Zanskar use this route during the winter, due to the Kargil-Zanskar road being blocked during the cold season. The trek is famous for its breathtaking beauty. Chadar in Hindi means carpet and the term is used to convey that the frozen river  resembles a carpet in winter.

“We had never before heard of a landslide of this magnitude hitting the regio,” Skalzang Wangyal, executive councillor (tourism) in the Kargil Autonomous Hill Development Counci,l told the media. "It has almost completely blocked the fast-flowing tributary, which passes through a narrow gorge." Wangyal said the trek is opened by early January and operates until March. “This is the peak season but we had to close it for the safety of local people and tourists”. 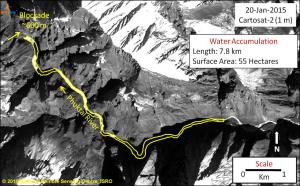 The Kargil deputy commissioner said that the authorities have done aerial survey of the area more than once. The district administration also said that it had stationed police personnel at Chilling and Nerak and had been air lifting stranded tourists.

After surveying the situation on January 18, a team of civilian and military engineers recommended that people who live downstream move to higher ground. They also discouraged authorities from using explosives to clear the blockage as doing so could trigger additional landslides. While the chance of a catastrophic flood is lower with the lake frozen, the risk will increase when temperatures rise in the spring.

The authorities have issued an advisory to the people living in four villages to vacate as there is a danger that the artificial lake may submerge these areas. “A few villages in and around the Padum area have been given direction to move to higher areas,” the Deputy Commissioner of Kargil Muhammad Sadiq Sheikh told the media. “ We don’t have any control over the situation. The NDMA will have to deal with the situation. We cannot say off hand whether it is because of the global warming,” that assessment will have to wait, said the officials.

The administration is planning to establish a police detachment in Phuktal Gumpa to get regular updates about the situation in the area, but ensuring that the information from this monitoring station reaches the concerned people in administration and also those at risk will be a challenge considering the remote location.

The central government has constituted a committee of experts to assess the situation and formulate strategy to prevent damage to life and property. 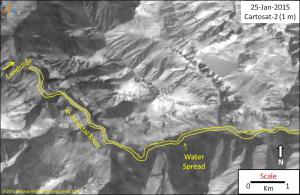 Image of Phutkal landslide dam of January 25, showing a much longer reservoir behind the dam compared to the previous January 20 2015 image

The local media is reporting  an "imminent eco disaster" and "‘imminent catastrophic flashfloods" in the Zanskar Valley. “For past two weeks, I have been apprising the Ministry of Home Affairs about the imminent ecological catastrophe,” said Ladakh MP Thupstan Chhewang. He said that said he has also requested the Defence Ministry to send its experts and a team of the Snow and Avalanche Study Establishment to the area.

Deputy Commissioner, Kargil, said that in case of the sudden bursting of the stored water from the artificial lake, a total of 29 villages and some bridges and other properties. in Kargil district would get affected. 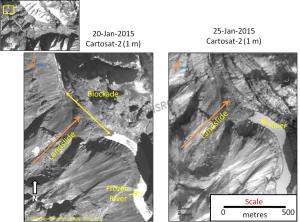 This is an edited version of an article that first appeared on South Asia Network on Dams, Rivers and People website.