Laying down a suitable standard for the City of Bombay presents a very complex problem set against a backdrop of a congested city where no large vacant sites are available.

Considering that the total acreage of the City is 17,388 acres and the ultimate population the City can hold is 32.5 lakhs, obviously the Western standards of open spaces cannot be adopted. The Master Plan of Greater Bombay had suggested a standard of 4 acres / 1,000 population for the then estimated population of 13 lakhs in the City. If this standard is adopted it would mean that as much as 13,000 acres i.e. 73 percent of Island area would have to be set aside for recreation.

The suburbs provide a wide scope for a more ambitious standard looking to the low densities prevailing and the availability of vacant lands. The standard, therefore, proposed to be adopted is 4 acres/1,000 population – 1 acre on neighborhood basis in the form of playgrounds and gardens and the remaining to be provided in the form of large parks.

– Report on the Development Plan for Greater Bombay, 1964.

The “ambitious standards” set for Mumbai in 1964 proved to be just that: ambitious.

According to a calculation in 2012, instead of the envisaged 4 acres of open space per 1,000 people, the city has a record low of .03 acres for every 1,000 people. Altogether, this adds to 14 square kilometres of gardens, parks, recreation grounds and playgrounds. Or put another way, roughly twice the area of Mahim Bay or 1,91,800 local train compartments. Even more disconcertingly, of whatever little open spaces remain, 45% are partially or wholly occupied, says reports of the Observer Research Foundation.

But all hope is not lost. An extended reading of Mumbai’s geography reveals natural riches of a higher level.

As if in redemptive foresight of the manmade misfortunes that would befall the city, igneous outbursts broke forth through fissures in the earth’s surface 66 million years ago, creating what is today known as the Deccan Trap. Speculated by some scientists to have been a primary cause of the extinction of three quarters of all plant and animal life at the time (including dinosaurs), these once destructive outbursts are, ironically, Mumbai’s IV drip, supplying the city life-giving hydrogen and oxygen atoms.

Today, the portion of the Deccan Trap falling within the Mumbai Metropolitan Region hosts the Sanjay Gandhi National Park. At an area of 104 square kilometres, this protected area comprises approximately 17% of the total landmass of present-day Mumbai.

This green expanse and other suburban areas are captured in Mumbai North, an urban portrait collection of suburban geography, featuring black and white photographs taken from 15,000 feet above sea level in December 2014 and January 2015. Accompanying each image is a record of the air pollution levels on the corresponding day, as measured by the Maharashtra Pollution Control Board.

Mumbai North will be on exhibit at ARTISANS’ during the Kala Ghoda Festival on 7-21 February, 2015. 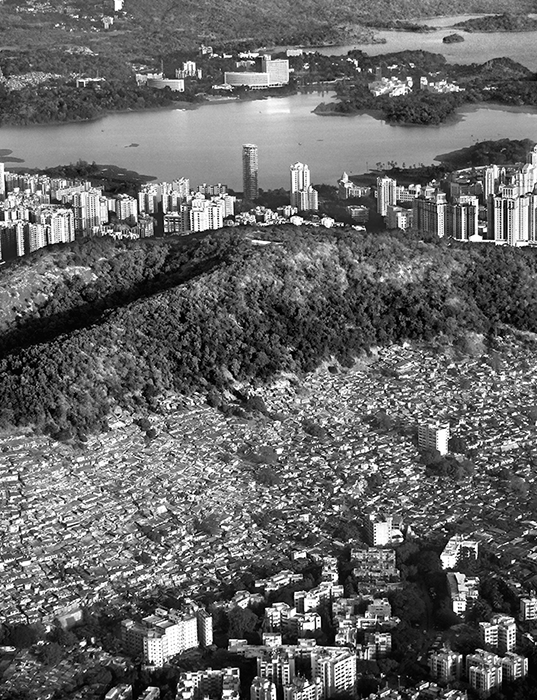 “The Powai Scheme was accordingly taken up for execution and completed in 1890.  The lake with a spread of 365 acres is situated about a mile from Vehar. A masonry dam 650 feet in length and 25 feet high impounds the water in the valley of 1,700 acres of catchment area.  Rainfall in the catchment area average 91” annually.  The top water level of Powai was 190 Town Hall Datum, which was too low to admit gravity flow to the City.

The supply of water which had to be pumped to the City was also not of as good a quality as that of other lakes and required elaborate treatment.  With the advent of the Tansa water, Powai supply to the City was therefore discontinued, the demand having been wholly met.

In the year 1919 the Corporation offered the Powai supply to the Government for the suburban needs after treating it in mechanical filters.”

“Unlike the City, the Suburbs have some large parks comprising of the vast forest preserves. The area stretching as a continuous belt from the National Park at Borivli, covering the areas of Tulsi, Vehar and Powai Lakes and Aarey Park with a total sweep of 16,334 acres, has the richest growth of woodland. Much of the belt is still in a primitive condition and is inaccessible. Nestling amidst the wooded hills lie three lakes, sources of Bombay's water supply.  Much has to be done to draw forth the recreational aspects in tune with the natural and topographical features. Even today, unkempt as the area may seem, the sublime natural landscape provides a handsome bait for escape from urban rigidity; especially the lake areas with their wild landscape, the ornamental patches of well laid-out gardens set against a back-ground of more rugged growth of trees, overlooking the serene waters of the lake has a magnetic attraction that draws every citizen of Bombay at some time or the other.” 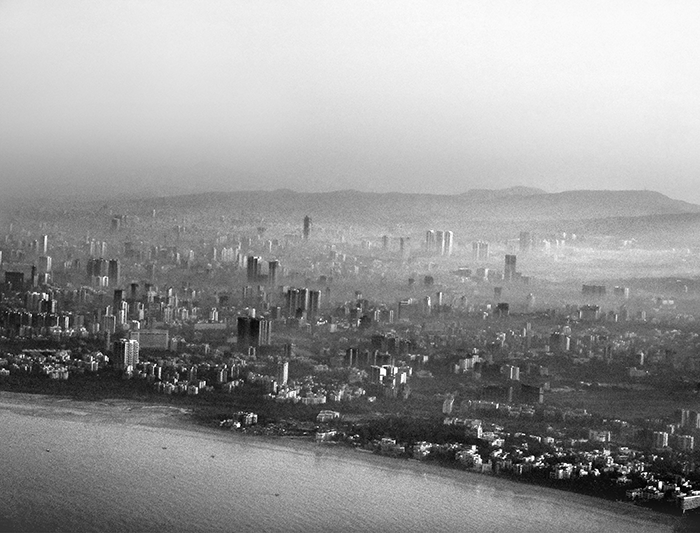 “For a day of relaxation, drive 20 km north of Bombay to Juhu Beach. The drive takes you through Bombay's larger suburbs, past a fishing village or two, several mosques and temples, and finally out to the first stretch of beach north of the city. Crescent-shaped and palm-fringed, Juhu is almost deserted on weekdays. Saturdays and Sundays, camels, ponies, acrobats and dancing monkeys enliven the scene.”

“A pertinent point that must be stressed is the necessity for a link between the two railways North of Mahim and Sion. The Master Plan had made a suggestion for a cross connection between the Central and Western Railways between Andheri and Ghatkopar for the improvement of both passenger and good traffic of the area, but it appears that the proposal was not pursued. In the year 1947 a proposal to connect Bandra and Kurla was investigated by the Railways and later in 1952 when the Oil Refineries were proposed to be installed but was discarded as it was not economically viable. Looking to the new development that has taken place in this region since the Master Plan Report, it appears that such a connection would now be a difficult proposal and such a connection may now have to be thought of by the railways outside Greater Bombay for connecting Virar or Baseein, Bhiwandi and Kalyan.” 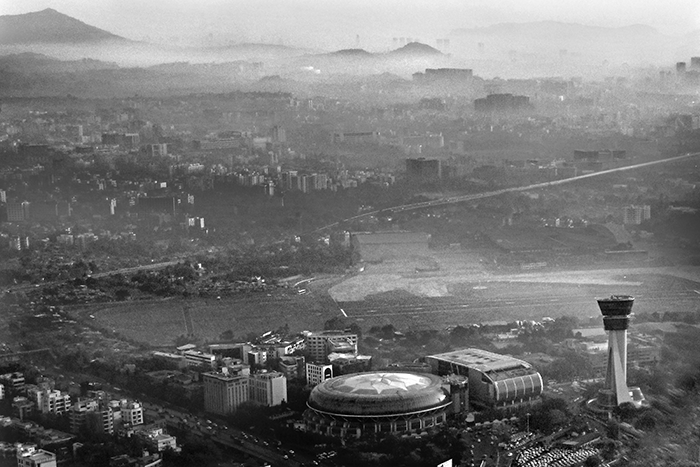 “The Development Plan shows no proposals for the expansion or improvement of the Santacruz Airport. However, proposals for the improvement of road connections to the Airport have been shown in the plan. Another airport site on the Uran Coast when the Port Authorities, the Army, the Navy and some commercial houses move on there may have to be thought of and with a good link between the main land and Greater Bombay, this should be of good use to Greater Bombay also.

There have been suggestions for starting a helicopter passenger service for the passengers landing at Santacruz Airport and intending to go to the Fort Area. A helicopter landing ground in the Fort area may have to be thought of as soon as some definite decisions in this respect are taken. The minimum size of landing ground required for a twin motor helicopter is about 300 square feet. This can be provided in the new Backbay Reclamation.” 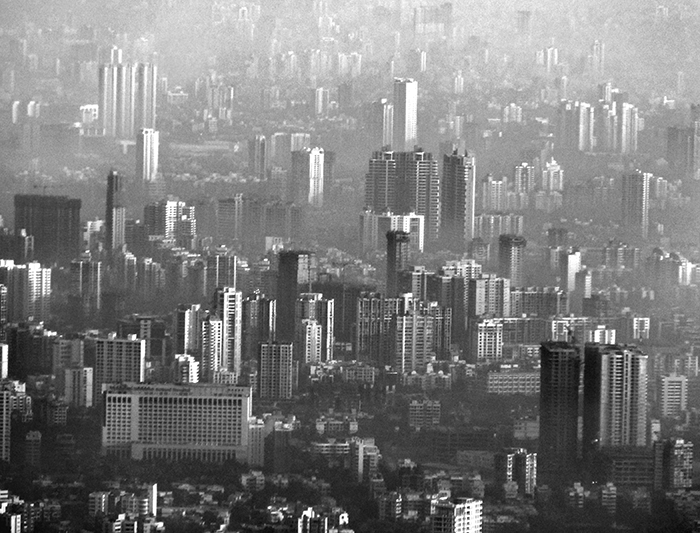 “The last consideration for fixation of F.S.I. is that there should be a limit to the size of a metropolitan area. There are a number of social and economical advantages in having a large metropolitan area, but when this becomes too larger certain disadvantages creep in. The cost of living goes up higher, especially the house rents and the prices of foodstuffs. The local taxation, merely to provide services compensating for losses in urbanization, soars up. There is no offer of rural amenities for the average citizen, congestion at the centre increases, transport and communication lines are lengthened and journey to work becomes long and tedious.  The surrounding fair sized towns start losing their independence because of the powerful influences wielded by the metropolitan area. In the event of war large concentration of population in a metropolitan area offers a good target and the problem of evacuation in an emergency becomes intricate.

In view of these restrictive influences the ultimate population of the City of Bombay should be restricted to 32.5 lakhs and of the Suburbs to 47.5 lakhs.” 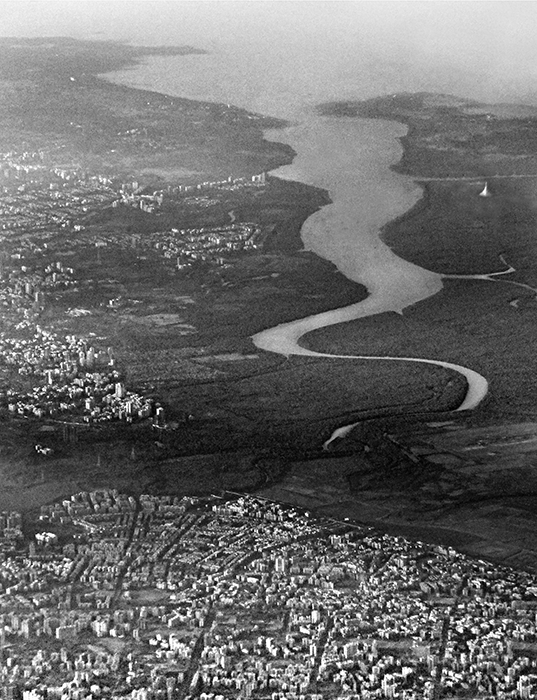 “It is indeed distressing to note that the City of Bombay, which claims to be the 'Urbs prima in Indis' has developed with scant attention to the provision of open spaces.  The surveys carried out have revealed that the City has roughly about ¼ acre / 1,000 population as against 7 acres and 10 acres / 1,000 population standard adopted in Britain and the U.S.A. There being no effective measures to prevent overcrowding and to check the prevailing high densities consequent upon the low living standards these have all summed up to make the existing open spaces more and more deficient.

Suburban areas, including that of the Extended Suburbs, fortunately present a different picture. The densities prevailing, the low rates of land and the fact that these areas are in the process of development, makes it possible for more effective control. How far the planned approach would reach its completeness would depend on a number of circumstances, but one thing is certain that the natural topography of the land with the rugged hills and dales with their panorama of scenic beauty would withstand the adverse designs of men with their own natural strength.”

“Bombay lies on the extreme west edge of one of the most prominent and widely spread rock-systems of India known as the Deccan Trap, which was formed, in all probability, immediately after the cretaceous period. The great igneous outbursts, with which the cataclysm then was associated, resulted in profuse flows of lava which, as suggested by Sir A. Geikie, were in all probability poured out from fissures and not from volcanic cones, and to which chiefly the peculiar horizontal formations characteristic of the trap-rocks are supposed to be due. The flow of lava extended over a vast area, covering a large portion of India lying between 10 degrees of latitude and 16 degrees of longitude. The traps about the island of Bombay are mostly basaltic and belong to the uppermost series of these rocks, and the presence of beds of volcanic ash in the form of ash breccias is by no means rare in the vicinity of Parel and Sion. The action however ceased aeons ago, and no volcanic action has been recorded in Bombay even in legend.”

Watch these stunning sights of Meghalaya that can only be seen from 4,000 feet in the sky