Contribute Now
Ad
The Bharatiya Janata Party has already begun to sound a lot like the party it replaced at the Centre: its leaders are insisting that its massive defeat in the Delhi assembly elections cannot be a reflection of Prime Minister Narendra Modi’s tenure over the last year. That's exactly what the Congress said about Manmohan Singh after the party was crushed in last year's Lok Sabha poll. Already, the BJP's chief ministerial candidate Kiran Bedi has insisted that the responsibility for the defeat lies with entirely her.

But even pushing that line only serves as a reminder of how much Modi and BJP president Amit Shah had invested in this election. Consider the ads that were running in Delhi the day before the polls. 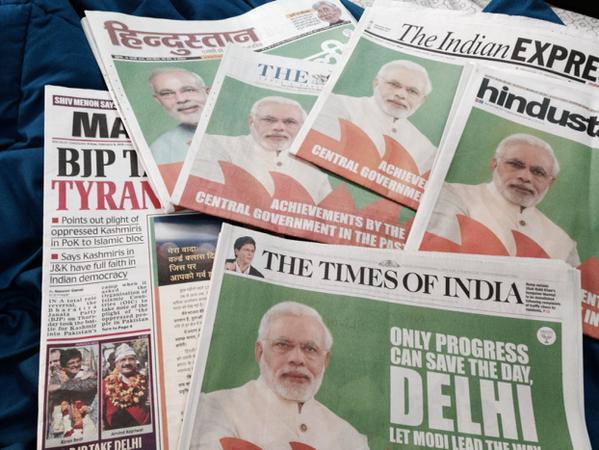 Or look back to just how much Shah and his team has done over the course of the last few months. Other than some intrigue in Bihar, the national political focus was squarely on Delhi, with little else to look at. So the BJP pulled out all its big guns, even changing from the formula that was successful in Maharashtra and Haryana: it didn't announce a chief ministerial candidate, preferring instead to sell Prime Minister Narendra Modi's appeal to voters.

But then, realising that the AAP workers had been spreading the Arvind Kejriwal message, the BJP decided to change tack and put up a contender. Picking from the same movement that made Kejriwal a national figure, the BJP went with fellow Anna crusader Kiran Bedi. Shah and Modi personally put their weight behind her.

But  the party was prompted to change approach yet again after a series of disastrous interviews and interactions by Bedi, coupled with unhappiness within the BJP's state unit that an outsider was being given such a prominent post. Amit Shah put finance minister Arun Jaitley in charge of the campaign, but the the BJP president himself also stepped in for good measure. Bedi was kept away from the cameras and journalists, as the BJP brought in more than 120 Members of Parliament and Legislative Assemblies to take on the AAP machine. Crores of rupees were spent on newspaper ads and hoardings, and the BJP moved to a seriously negative campaign instead of pushing the virtues of its chief ministerial candidate.
None of this managed to achieve much. It may even have worked against the party.
The Delhi voter knew she wanted a stable government, after the fractured mandate in the 2013 election and the year of President's Rule that followed the AAP's minority government. The signs of panic within the BJP, which were evident from its negative campaigning and the botched unveiling of Bedi, convinced many voters that the momentum was with AAP. And, though it hasn't been the case in Jammu and Kashmir or Maharashtra, the general tendency over the last few years has been for voters to pick their winners and give them large majorities.

That's exactly what's happened, and the BJP will not be able to shy away from acknowledging the political capital expended by Shah and Modi. On Tuesday, party spokespersons on TV attempted to spin the verdict as being a "referendum for Kejriwal" rather than a vote against Modi. But it's evident that the result damages the prime minister's image as being beloved of all Indians and unimpeachable in his approach. It will also make others within the BJP question Amit Shah's supreme status, making it harder for him to run roughshod over the concerns of local BJP MPs across the country.

This doesn't mean that the BJP is done for, as AAP leader Yogendra Yadav himself attempted to make clear speaking to journalists as trends became clear. "It isn't the case that Mr Modi has become unpopular... even though Mr Modi turned this into a personal referendum on himself," Yadav said. "Is it because the myth of invincibility once shattered is impossible to recreate? I do not think by itself the days of the BJP are over."

Indeed, while it will give plenty of optimism to anti-BJP parties everywhere, how this affects dynamics within the BJP will be as significant a storyline.