Contribute Now
Ad
Taiwan recently made the unprecedented move of banning children two years and younger from using any form of digital technology.

Older children and teenagers will also be severely restricted, with new laws stating children aged 18 years or less will only be permitted to use electronic devices for a “reasonable” length of time. What is “reasonable”, however, is yet to be defined.

As with the use of any illegal substance or product, severe fines (in the vicinity of A$1,500) are in place for parents should their child break these new laws. This new ruling is a measure to limit children from potentially spending long hours in front of a screen.

In neighbouring China, online addiction among young people has reached epidemic proportions. The Taiwanese government does not want the island nation to follow in China’s footsteps. And they’re not alone.

Children’s use of technology is booming around the world, and this is causing anxiety for many. Governments and lobby groups internationally are making moves to restrict the ways children can use technology.

In an attempt to combat cyberbullying here, the Australian Council on Children and Media is urging the Australian government to launch a debate regarding the age of ownership of smart phones. Current figures indicate that the majority of children get their first mobile phones at about the age of 10 years.

This new lobby initiative is based on the premise that many children have unsupervised access to technology, and therefore have a greater opportunity and inclination for cyberbullying.

Japan has moved in a similar direction to combat cyberbullying, with parts of the country introducing a curfew that bans children from using smart phones and mobile devices after 9pm.

Similarly, in a recent article in the Huffington Post, a paediatric occupational therapist called upon “parents, teachers and governments to ban the use of all handheld devices for children under the age of 12 years”. Under the proposed guidelines, children older than six would be allowed a total of two hours of screen time, including television, per day.

Growing up with a screen

These new laws, initiatives and pleas are motivated by the idea that technology is bad for children, and that only by restricting their access will they be able to grow up happy and healthy.

This suggests that by the single (and seemingly simple) act of removing technology from their lives, bullying will become non-existent, all children will be fit rather than overweight, and that mental health problems such as aggression and depression in childhood will diminish.

Children’s health and happiness are essential goals. However, magic wand thinking is not going to get us there. Children may be young, but this does not mean their lives are simple. There are many factors at work that would lead to a child cyberbullying, just as there are multiple factors that contribute to an individual being obese.

Technology is an intricate part of life today and there is a lot of benefit to its use. Banning or restricting children’s access has far reaching implications for their health and happiness.

Not allowing children to use devices or the internet hampers their ability to engage with the world they live in. Similarly, technology offers many educational benefits for children; school curricula around the word rely on technology for this very reason. If children’s access to technology is restricted, long term implications for children’s opportunities for learning may arise. 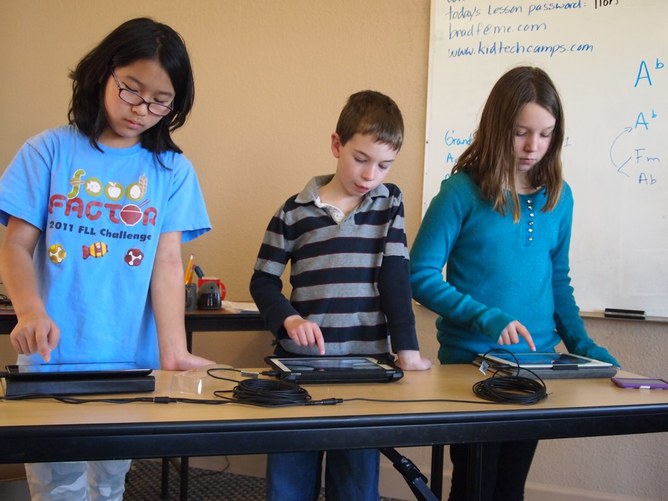 Digital technology is already being used for education. Lexie Flickinger/Flickr, CC BY

Long-term economic implications could also arise from this. How will children ready themselves for the job market when they are 18 years old if they have had little chance to develop deep knowledge of how to use technology to find, organise and communicate ideas?

It would be like waiting until a child is 18 years old before they can own and use their own literacy tools such as pens, paper and books. This is the knowledge economy, yet this plan is from the dark ages.

With banning devices also comes the need for surveillance. One might envisage that parents or teachers would be expected to undertake this role. Child/parent and child/teacher relationships are vitally important for children.

Research consistently tells us that positive relationships with key adults have long term and unmatched implications on children’s self esteem, confidence and happiness.

A government adding an unfathomable surveillance role of not allowing technology use (in our technology bound society) gives the message that children are not be trusted and will add significant strain to these relationships at a cost to children.

Technology is not going away. Locking children away in a tech-free tower until they are adults is not the answer. Why not shift gear to one of hope, potential and the pursuit of how to live well with these devices?

This doesn’t necessarily mean listening to all the advertising about technology and how it can change our lives, but rather taking a critical approach to considering the benefit it holds for our children and how to achieve it.

Part of this is seeing technology from the perspective of children to understand the value they find in its use and how this matches our own goals for them as they grow and develop.

It also means understanding how technology can be managed in the home so complaints about children’s use do not remain the unwavering focal point. Many families have developed meaningful strategies that work for children and adults. It is these families that should be the starting point for this understanding.

While Taiwan’s tech-laws have been introduced to support the wellbeing of children, learning to grow well with technology rather than restricting it, may be more conducive to that goal.