Contribute Now
Ad
On Wednesday, Pahlaj Nihalani, the chairman of the Central Board of Film Certification, sent out a list of proscribed words to regional officers.  Containing swear words in both English and Hindi, it was filled with slang terms for genetalia, orifices and references to female relatives.

Several of these epithets featured in the "roast" event organised by the All India Bakchod comedy group in January. The YouTube video of the event so outraged conservative groups, they moved court on Thursday and obtain an order for the police to file obscenity charges against 14 people ‒ including two prominent actresses, Deepika Padukone and Alia Bhatt, who were in the audience and were depicted laughing at the jokes. As it turns out, the CBFC actually nas no jurisdiction over stage events.

The list of proscribed words notably includes "Bombay", a word that the censors had forced singer Mihir Joshi to bleep out of a music video last month. They contended that since the name of the city had officially been changed, he should  have called it Mumbai in his tune. 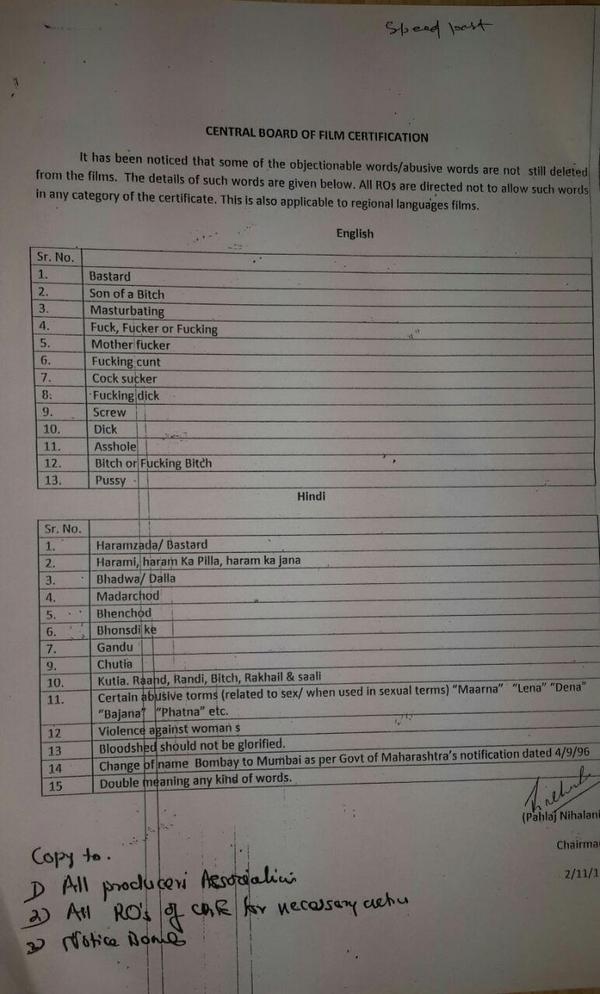 Strangely, the list has elicited the ire of censor board member Ashoke Pandit, who had been at the forefront of criticising the AIB Roast. He had described the show as pornographic, and had a suggestion for director Karan Johar, who was among the participants.

On Friday, though, Pandit, the director of a film titled Sheen, took to Twitter to criticise the CBFC's decision to ban some words from films.

I as a Filmmaker & #CBFC board member do not endorse the list issued by the Chairperson On words not to be used in films.I ws nt consulted.

Does the #ChairpersonCBFC endorse other bad words which are not in this list can be used in the films.?#Antifilmmakers.

The list of words 'not to be used in films' issued by the Chairperson is against the freedom & creative liberty of a filmmaker. #CBFC

If I am portraying the character of Dawood in my film, he will use the language as per his character & not what a saint would use. #CBFC