The sun is currently classified as a “main sequence” star. This means that it is in the most stable part of its life, converting the hydrogen present in its core into helium. For a star the size of ours, this phase lasts a little over 8 billion years. Our solar system is just over 4.5 billion years old, so the sun is slightly more than halfway through its stable lifetime.

After 8 billion years of happily burning hydrogen into helium are over, the sun’s life gets a little more interesting. Things change because the sun will have run out of hydrogen in its core – all that’s left is the helium. The trouble is that the sun’s core is not hot or dense enough to burn helium.

Eventually that force compresses the centre of the star to such a degree that it will start burning hydrogen in a small shell around the dead core, which is still full of helium. As soon as the sun begins to burn more hydrogen, it would be considered a “red giant”.

The process of compression in the centre allows the outer regions of the star to expand outwards. The burning hydrogen in the shell around the core significantly increases the brightness of the sun. Because the size of the star has expanded, the surface cools down and goes from white-hot to red-hot. Because the star is brighter, redder and physically larger than before, we dub these stars “red giants”.

It is widely understood that the Earth as a planet will not survive the sun’s expansion into a full-blown red giant star. The surface of the sun will probably reach the current orbit of Mars – and, while the Earth’s orbit may also have expanded outwards slightly, it won’t be enough to save it from being dragged into the surface of the sun, whereupon our planet will rapidly disintegrate.

Life on the planet will run into trouble well before the planet itself disintegrates. Even before the sun finishes burning hydrogen, it will have changed from its present state. The sun has been increasing its brightness by about 10% every billion years it spends burning hydrogen. Increased brightness means an increase in the amount of heat our planet receives. As the planet heats up, the water on the surface of our planet will begin to evaporate.

An increase of the sun’s luminosity by 10% over the current level doesn’t sound like a whole lot, but this small change in our star’s brightness will be pretty catastrophic for our planet. This change is a sufficient increase in energy to change the location of the habitable zone around our star. The habitable zone is defined as the range of distances away from any given star where liquid water can be stable on the surface of a planet. 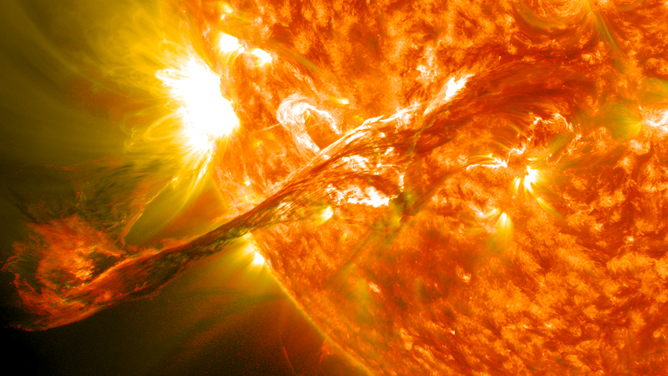 This 10% increase in the sun’s brightness, triggering the evaporation of our oceans, will occur over the next billion years or so. Predictions of exactly how rapidly this process will unfold depend on who you talk to. Most models suggest that as the oceans evaporate, more and more water will be present in the atmosphere instead of on the surface. This will act as a greenhouse gas, trapping even more heat and causing more and more of the oceans to evaporate, until the ground is mostly dry and the atmosphere holds the water, but at an extremely high temperature.

As the atmosphere saturates with water, the water held in the highest parts of our atmosphere will be bombarded by high energy light from the sun, which will split apart the molecules and allow the water to escape as hydrogen and oxygen, eventually bleeding the Earth dry of water.

Where the models differ is on the speed with which the earth reaches this point of no return. Some suggest that the Earth will become inhospitable before the 1 billion year mark, since the interactions between the heating planet and the rocks, oceans, and plate tectonics will dry out the planet even faster. Others suggest that life may be able to hold on a little longer than 1 billion years, due to the different requirements of different life forms and periodic releases of critical chemicals by plate tectonics.

The Earth is a complex system – and no model is perfect. However, it seems likely that we have no more than a billion years left for life to thrive on our planet.

Could a meteorite really have killed a bus driver in Vellore?