Contribute Subscribe
The Aam Aadmi Party was swept to power in last week’s elections in Delhi on the promise of heralding a new era of politics and governance. Their experiments in clean and transparent funding,  the participatory manner of drafting the manifesto, and rather novel methods of organising and campaigning, all point towards a new mode of politics that the country was waiting for.

But when the seven member Arvind Kejriwal cabinet took oath of office among the sea of white caps at the Ramlila Maidan, the picture on the podium was jarring. For a party that claims to have women empowerment at the heart of their governance agenda, there was no woman minister taking oath that day. It was an just an ' All Aadmi’ cabinet.

Delhi is not the only state with a zero woman cabinet. Giving it company are seven other states: Uttar Pradesh, Telangana, Punjab, Puducherry, Mizoram, Nagaland and Arunachal Pradesh.

Here is a comprehensive look at data from across the states on the gender composition of state assemblies and cabinets, the proportion of women ministers to the size of cabinet, the total number of elected women representatives of the ruling party and coalition, and the portfolios allotted to women ministers. The emerging picture is not very encouraging.

Women in the assemblies

At the very heart of the exclusion of women from political power is the dismal representation in legislative assemblies. Of the 3974 MLAs, a mere 352 are women, which means women constitute only 9% of the total elected MLAs across all the legislative assemblies. This varies across regions, the best performers being the central states of Madhya Pradesh and Chhattisgarh, and the worst being those of the North East. The best isn’t saying much. 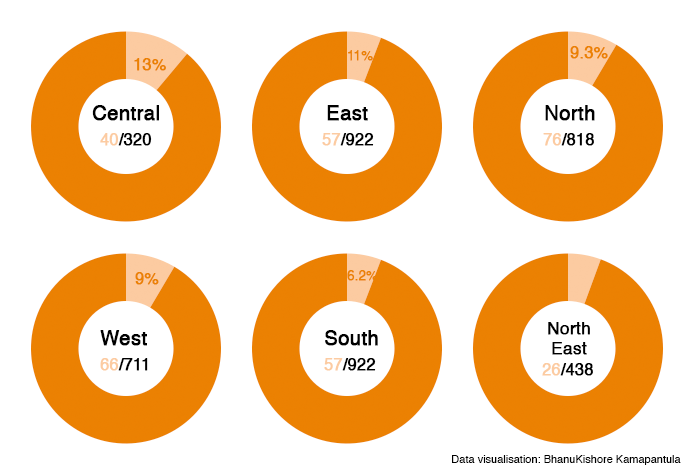 Bihar, Rajasthan, Haryana with 14% each, Madhya Pradesh (13%) and Punjab (12%) are the states with highest percentage of women MLAs in the state assemblies.

On the other end of the spectrum are Pondicherry, Mizoram, Nagaland with no women MLAs at all, followed by Karnataka and Arunachal Pradesh with 3% representation.

Then there are larger states with more than 100 MLAs, in the assembly, which have abysmally low proportion of women MLAs, even lower than the national average. This cohort, rather surprisingly, consists of Southern states of Telangana, Tamil Nadu, Kerala, Karnataka along with Orissa and Maharashtra. 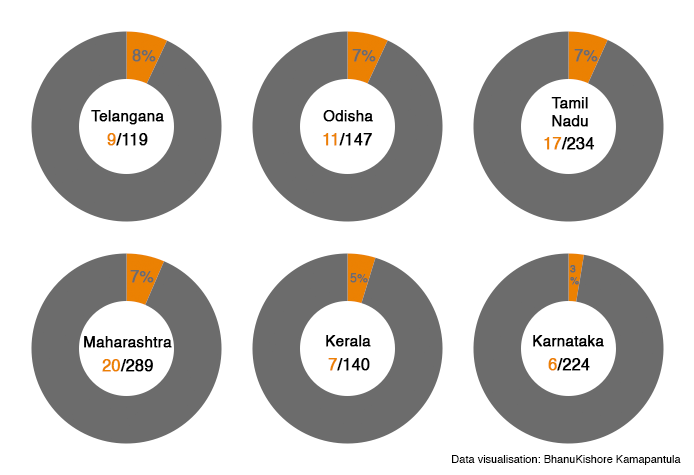 Of the 556 ministers across states, only 38 of them are women, which includes three Chief Ministers. That's just 7%.

Meghalaya (25%), Jharkhand (20%), Rajasthan and Andhra Pradesh (15%) and Madhya Pradesh (13%) are the states with the highest percentage of women in the Council of Ministers.

Then there are states with women MLAs higher than the national average (9%), but their representation in the Council of ministers is rather dismal. Sharing this hall of shame are UP, Punjab and Delhi with zero women and Bihar with just 3% in the Council of ministers. Higher women MLAs does not necessarily pave the way for better representation in the ministerial bandwagon. Much depends on the leadership of the Chief Minister who displays commitment towards more inclusive cabinets and women’s political representation. 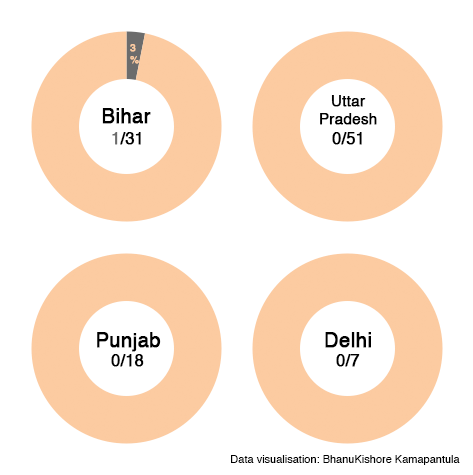 That brings us to the question about women chief ministers and their commitment towards creating spaces for women in decision-making. Data from the three states of West Bengal, Rajasthan and Gujarat shows an interesting picture. Although all three states have women in the CoM higher than the national average, Vasundhara Raje has ensured better representation with 15 %, followed by Mamata Banerjee at 9% and Anandiben Patel at 8%.

What constitutes such a dismal representation of women in the council of ministers? Are enough number of women from the ruling parties not elected to ensure a better representation? Data shows otherwise. Of the total woman MLAs, those belonging to the ruling parties constitute between 54%-100%, as in the case of Delhi. Kerala and Goa are the outliers, where just one woman MLA from the ruling party got elected and was given a place in the cabinet. It then boils down to the political will of the leadership to create greater space for participation of women in governance and decision making.

When women do make their way to ministerial positions, how diverse and important portfolios are they vested with? How many women ministers hold big ticket portfolios like home and finance? How often are women considered for ministries that does not include women, child and social welfare? Turns out, not very much.

Apart from the three women chief ministers, who kept one of the big ticket portfolios with themselves, the only notable mentions are those of Indira Hridayesh, who holds the Finance portfolio in Uttarakhand, and Roshan Warjri of Meghalaya, who is in charge of the Home ministry. Among the states that do not have women holding the customary women and child development and social welfare are Kerala, Goa, Himachal, Uttarakhand and Assam.

Women chief ministers tend to keep one of the big ticket portfolios with themselves. Vasundhara Raje holds finance, while Mamata Banerjee and Anandiben Patel have retained the home portfolios. In contrast, data shows most male chief ministers delegate home and finance portfolios to their male colleagues.

In this rather dismal picture of women’s political representation and leadership, the rather charming story is that of Meghalaya, where of the four women MLAs, three are ministers. Arvind Kejriwal, Akhilesh Yadav, Prakash Singh Badal, K.Chandrashekhar Rao and others could take a leaf out of Mukul Sangma’s book and create berths, not just token but substantial ones, for women in their council of ministers, without which the talk of women empowerment sounds like empty rhetoric.