Contribute Now
Ad
With its unprecedented success in the local body polls in Assam, the Bharatiya Janta Party had justifiable reasons to feel that it had something to rejoice about. After all, the party won a majority in 39 of the state’s 74 town committees and municipal boards. But the bombshell of a resignation letter by its national executive member Prodyut Bora on Wednesday has exposed the fissures in the party, leaving it scrambling for cover.

Considered the first IIM Ahmedabad graduate to have joined full-time politics, Bora, 40, has been the BJP’s national media cell member in the past and was the national convenor of the party's IT Cell during 2007-09.

In a four-page long stinging letter of resignation addressed to party president Amit Shah, that he posted on his Facebook page, Bora tore into the top leadership of the BJP, with some choice words aimed at Prime Minister Narendra Modi, president Amit Shah and state BJP president Siddhartha Bhattacharyya.

In a prefatory note to his resignation letter, Bora said that his "departure from the BJP was not a knee-jerk reaction to any specific event, but a gradual disillusionment – loss of faith – with the general drift of the Party at both the national and state levels."

"Therefore it was very difficult for me to compose a resignation letter and cite specific causes," he wrote, going on to list five broad reasons for his resignation:

1. Assam features fairly low on the priority of the national leadership
2. Subversion of the democratic tradition by the Modi-Shah duo
3. Political Corruption in Assam BJP
4. BJP's dalliances with the most corrupt Himanta Biswa Sarma
5. State President Siddhartha Bhattacharya's actions and utterances

Bora's resignation was not unexpected, as he had been opposed to the entry of former Congress minister Hemanta Biswa Sarma  into the BJP. Sarma had to quit the Tarun Gogoi government after suggestions that he was implicated in the Saradha scam,

“What great virtue do you see in Himanta Biswa Sarma, apart from winning elections by hook or crook, that you are considering inducting him into the party? Is he going to be BJP’s paradigm of a model karyakarta? Or do the considerations of winning elections make you overlook a person’s antecedents completely?”

But as he made clear in his note, it was not just about the party's state unit, and the resignation letter went on to directly question the two men who rule the BJP, starting with the national president Amit Shah:

Amitji, have you cared to find out what your team thinks about you? Your highly individualised/centralised style of decision-making has ensured that many party office bearers feel highly disempowered. Moreover, in any organisation, the style of the leader is quickly copied by those below him. What I am seeing in the Party -- at least in my state -- is the flowering of junior Amit Shahs, with a tenth of your capability and ten times your arrogance"

“The Indian people have embraced democracy not just in form but also in spirit. In the ‘cabinet system’ that we have adopted, the Prime Minister is the ‘first among equals’, not the first among unequals. But, if my understanding is correct, hasn’t Modi-ji damaged this democratic tradition?”

“Today the Foreign Minister barely knows that the Foreign Secretary is about to get fired; Cabinet Ministers cannot even appoint their own OSDs (Officers on Special Duty); and power is increasingly being centralised in the Prime Minister’s Office (PMO). This makes me wonder: does the Cabinet System still exist in this country? I am mortified to see that no Cabinet Minister, no National Office Bearer, no Member of Parliament has demonstrated the courage to question Modi-ji on the subversion of this fine democratic tradition,”

The full text of the letter: 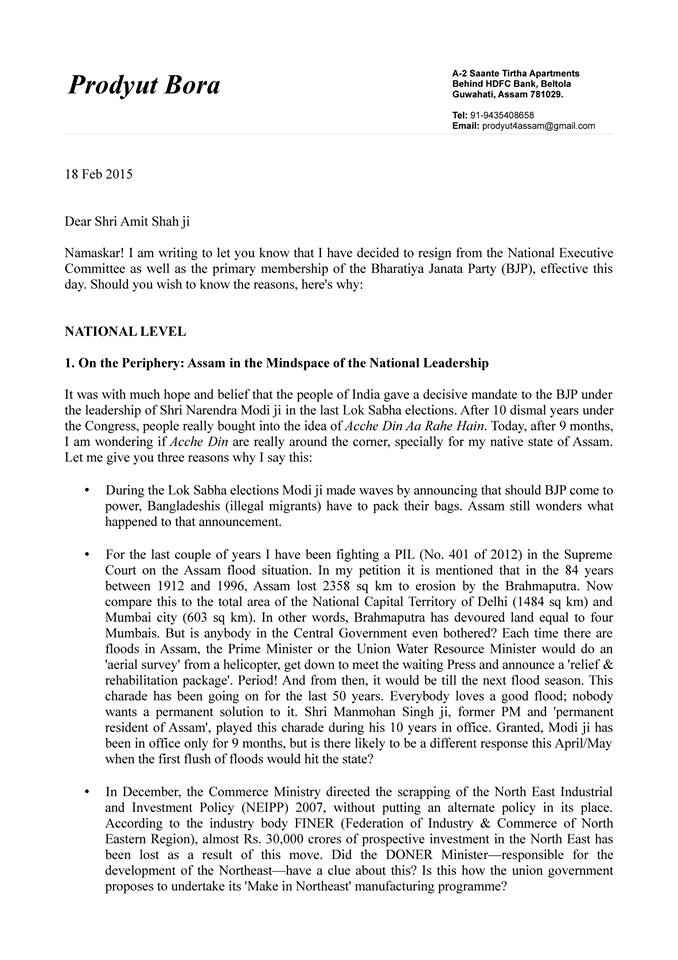 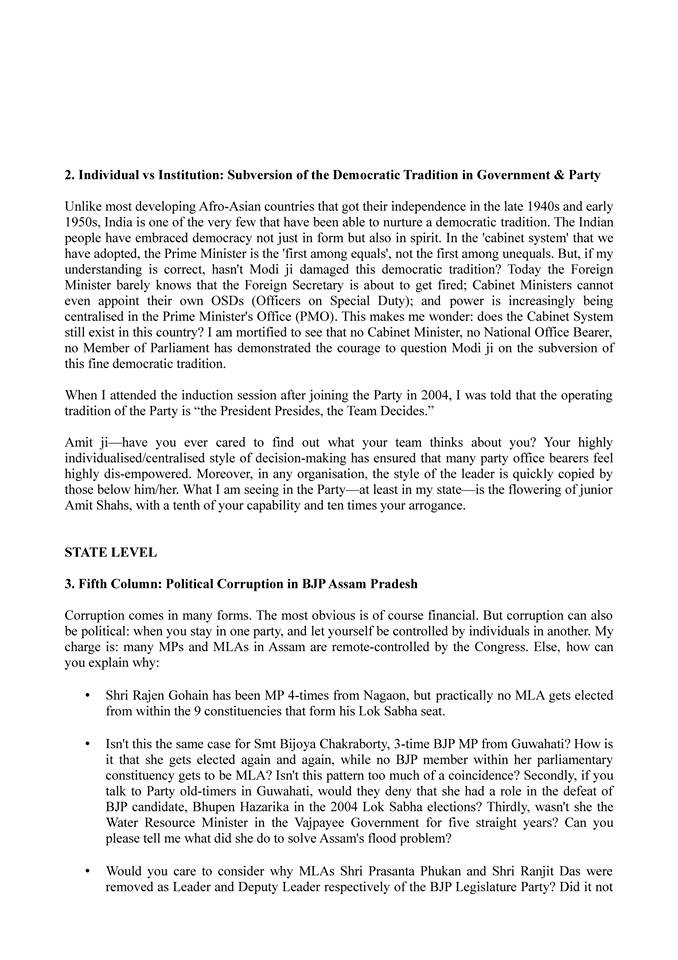 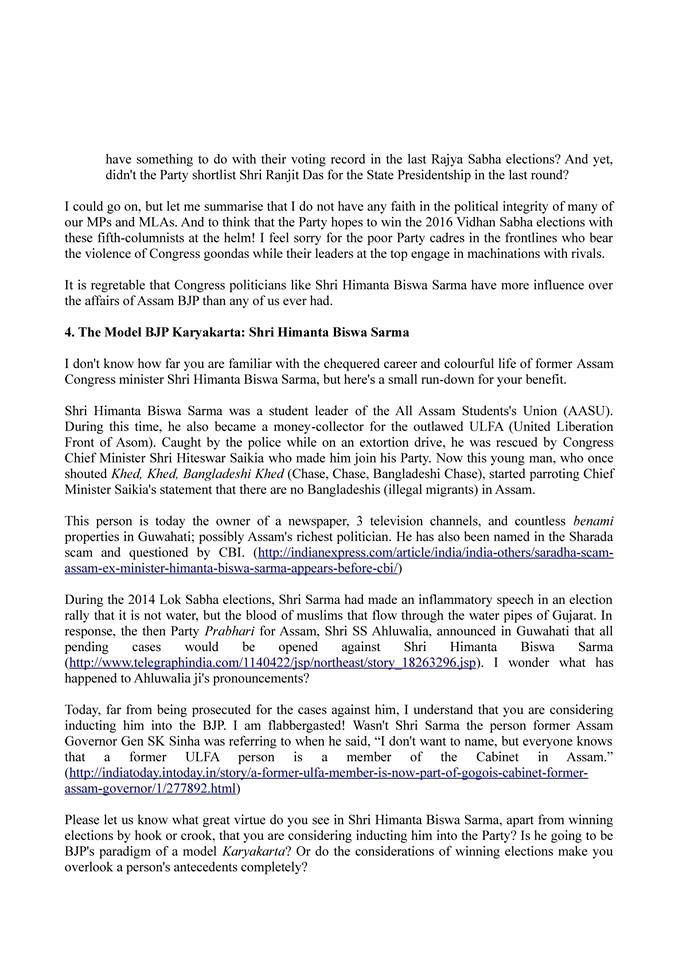 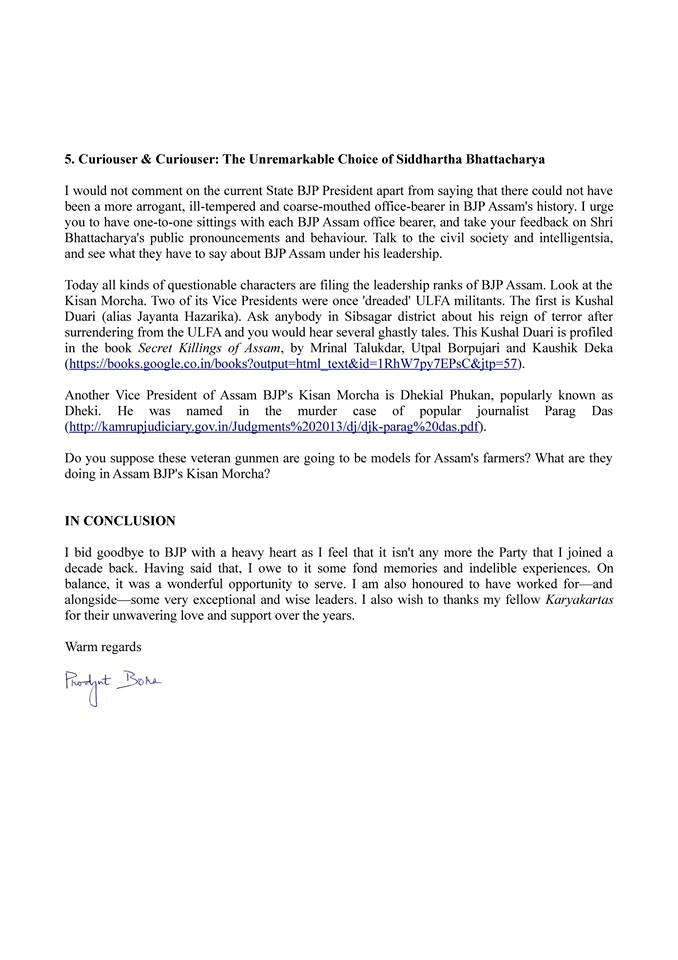 Earlier, the Economic Times quoted an unnamed  senior central leader of the BJP as saying, "After the inroads into Jammu and Kashmir, ideologically, Assam is extremely important for us because of the kind of minority politics that is practiced there."

Which is why, Bora's  questioning Modi about his Lok Sabha election campaign, that Bangladeshi infiltrators would have to pack up after the polls, is significant.

With his exit, the fault-lines in the party are out in the open.