Contribute Now
Ad
I couldn’t have imagined that the first time I would see someone in Pakistan drinking openly in public it would be in the Bahawalpur desert. Yet, there it was. The man was young, wearing a red shalwar kameez, with an unmistakable green Murree Brewery beer can. He caught me staring and offered me one, and I graciously accepted, still dumbfounded. There were whiffs of narcotics too, but the strong wind blew them away intermittently. We were stationed at a particularly sharp corner along with hundreds of spectators on the second day of the 10th Cholistan Desert Jeep Rally, watching massive 4×4’s struggle with the treacherous sand as they came in to the turn. 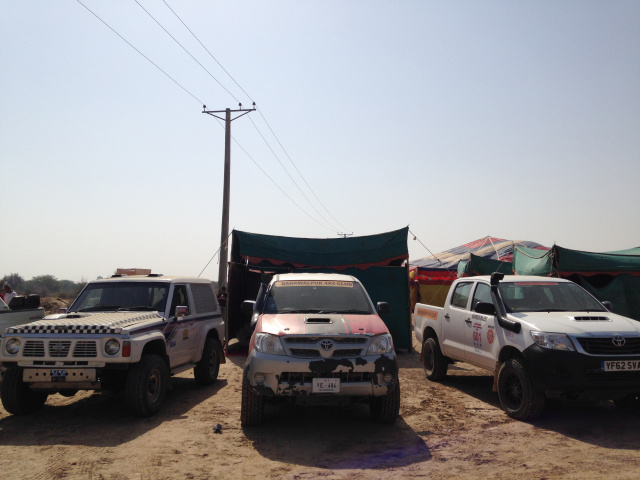 Cars from Bahawalpur 4×4 club lined up at camp. (Saim Saeed)

There wasn’t much in the way of barriers; just two border troops with sticks yelling at spectators as they transgressed the imaginary line the troops had made around the turn. Every time a car got stuck in the sand, which was often, spectators swarmed around the car yelling instructions to each other. They pushed and pulled, and when the driver revved the car, he spat more sand on all the people trying to help, before eventually racing away trying to make up for lost time.

Most spectators looked seasoned. They brought umbrellas and dust masks and rugs and ice boxes. They sat on folded chairs, and wore big moustaches. Many had assault rifles lazily leaning next to them. There wasn’t a woman in sight.

It was my first time. I had met a participant at the rally through a mutual friend who invited some friends and I to attend the rally, also known as “Pakistan’s largest motor sport event”. Two days before the qualifying round, I took a bus from the southern port city of Karachi to Bahawalpur to check it out.

Pakistan’s tourism industry has seen a spectacular collapse over the past decade as its security situation deteriorated. Hotels across the country have been targeted (most spectacularly the Islamabad Marriott in 2008 that killed 58 people), and so have foreign embassies, diplomats, and tourists. In 2009, the Sri Lankan cricket team was attacked, shutting out Pakistan from hosting any international cricket. In 2013, gunmen dressed in army camouflage killed 10 foreign mountaineers on the Nanga Parbat base camp. And then just last year, a Spanish tourist cycling through Pakistan was attacked in Balochistan; six policemen in the convoy assigned to protect him were killed.

Tour guides, hoteliers, and hustlers were left to pick up the pieces, and they started with the natives. While international tourism might have slowed to a trickle, local tourism continues to thrive. There was ample evidence of that at the rally, where nearly 100,000 people showed up. 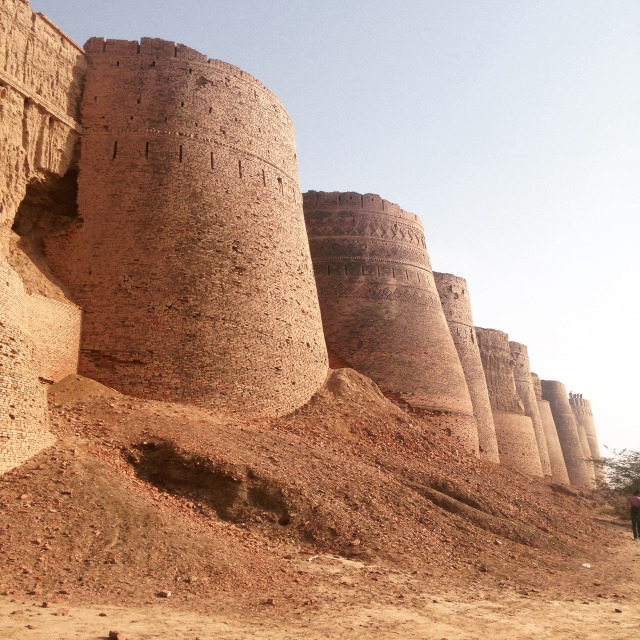 The race took off in front of the Derawer Fort. (Saim Saeed)

There was plenty on offer, too. The race took off in front of the centuries-old beautiful Derawer Fort. There was a mausoleum next to fort embellished with the blue tiles south Punjab is famous for; a mosque made very much in the Mughal style of the Taj Mahal and the Badshahi Mosque.

But in typical fashion, both the fort and the mausoleum were closed on the day we went. There were no guards to tell us why, just a big lock on the gates and some barbed wire that encircled the area. One would have imagined that when the whole point of the rally was to boost tourism, they would open the doors to the tourist sites on offer, but perhaps inevitably in Pakistan, politics came first.

Last year, the fort was closed by its owner, Faizul Rashid Abbasi, for not being involved in the administrative committee of the race. Abbasi is the heir of the last Nawab of Bahawalpur before the former princely state was fully absorbed into Pakistan, and simply observing the abject state of disrepair the fort had fallen in can make an argument for nationalisation. While technically Abbasi isn’t in government, he’s an influential political figure in the region. Our camp was wedged between the highway that led to the fort and his hunting grounds. This year, Abbasi did organise the rally but the fort was still closed. Many residents simply didn’t have an answer. One said, “There are too many people,” and another said darkly, “Security.” 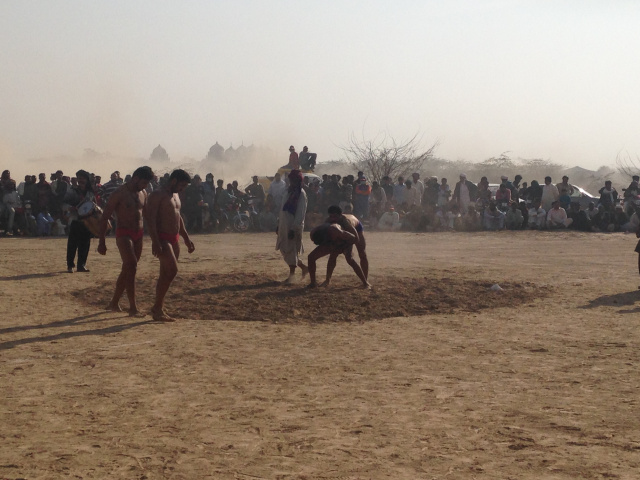 There was some wrestling too. (Saim Saeed)

While it was supposed to be all fun and games – kabaddi tournament; bikers doing wheelies and tricks; concerts; ice cream trucks in the desert; circus performers; fireworks; drugs, alcohol, prostitutes (some from as far as Russia, attendees told me, though I didn’t see any) and of course, the cars – politics was inescapable.

The armed forces already had a strong presence in the region because of its proximity to India. A paramilitary force called the Punjab Rangers does border patrol, and the authorities called in extra troops to ensure security around the track and the event. Although they couldn’t have been that good at their jobs; a driver told me all the foreign liquor was smuggled from across the border.

They also beefed up security in Bahawalpur city, an hour away. Earlier, when we were entering the city, a policeman stopped our car and asked us for identification and registration papers. Upon asking why we were stopped, the policeman smiled sheepishly and said the army people told him to, and subtly pointed to the truck standing about 40 metres away. “I’m just following orders,” the policeman said, telling us everything we need to know about civil-military relations in the country. One of the origin stories I heard of the Cholistan rally was that the army organised the rally in 2004, but the results were rigged. “Brigadier this won this category. Colonel this won that category. It was all a sham, so the civilians decided to do their own thing,” a driver told me.

The participants, for the most part, had comparable wealth, which made sense. It would be disingenuous to say the Tourism Development Corporation of Punjab sponsored the event when so much of the rally was funded by the participants themselves. Only a giant, inflated neon Mountain Dew gave any indication that the race had corporate sponsors. Most participants funded their own rally cars, mechanics, transport, accommodation, and food. I was lucky to have accommodation in a private camp. Most spectators and journalists were only given a tent a few square feet of the parking lot, where they were to pitch it. A big watering hole next to it was the makeshift shower area for the thousands in attendance. Many were forced back to Bahawalpur city for the night. Just the registration fee was $350. And looking at the vehicles they were driving, the expenses were much, much higher.

The race cars were massive, roaring supercharged monsters – the most obvious extensions of their masculine owners. The drivers wore cowboy hats and Harley Davidson shirts that were stretched by big bellies. Any discussion over the dinner table inevitably was about the suspension, the drive, that race from three years ago when the car overturned.

Essentially, I was amidst a subculture with its own hierarchy of drivers, mechanics and cars; their own vocabulary and lexicon (putt was a patch of flat, dry ground upon which cars could accelerate; teep is a sand dune; khaadir is a series of bumps; the front of the car floats;); their hopes and their rivalries.

But a sad rally

The day of the rally was a disappointment. There were no cameras at any stretch of the 220 km course, so the spectators were resigned to only watch the cars leave from the starting point and arrive at the finishing line. If they were charitable, the drivers would do a few donuts to excite the crowd. The sand was blowing so fiercely it was difficult to see the cars from the stand. After the excitement of watching the first few cars leave subsided, the audience moved over to the television that was screening the India-Pakistan world cup match. For obvious reasons (Pakistan lost), interest in the match also soon subsided. Some dancers and drums kept the day alive for some time before they too packed up their bags and left. We left before the prizes were awarded, a $1,500 financial reward.

But even before the winners were announced, the gunfire had already started. Sporadic bursts of gunfire, some hooting, and then some more gunfire were sounded. I looked up and had the limp realisation that there is no roof above me, and I really can’t hide anywhere when the bullets come down, so I gave up and enjoyed the fireworks instead.