Contribute Now
Ad
Visit any big online Indian forum and you are likely to find a special section reserved for discussing mobile phones, reviews and the new trend of flash sales and ‘invites’ which have kept youngsters in the country busy tracking phone brands and models minute by minute just to lay hands on that ‘exclusive’ device.

Bizarre as it might seem for a country dealing with massive inequality in access to basic food and water, the sheer size of the Indian mobile phone market ensured there were as many as 1,137 new models of phones launched in 2014, according to a study by 91mobiles, a research and comparison website for mobile phones and gadgets.

This implies that roughly three phones were launched every day in the year and in part explains the flurry of press invites, leaks, and subsequent bans that made even a new ‘exclusive’ launch seem like a breaking news story.

Compared to this, 957 phones were launched in 2013,  which shows an almost 20% increase in the number of new phone launches.

While these figures might at first glance make it seem as if the Indian market for phones has an ever expanding belly, only a few days back, International Data Corporation revealed that the growth rate of the Indian mobile phone market has actually contracted for the first time. While smartphones market declined by four percent, the feature phone market declined by a massive 14 per cent in the October-December quarter of the year 2014.

This, however, didn’t stop manufacturers from launching phones and customers to drool over them.

As visible from the chart above, Indian mobile phone manufactures clearly dominated their international counterparts when it came to launching new devices and the trend has only continued over the past year.

Even as the feature phone market loses sheen, smartphone manufacturers are bringing in new models. Here is a lowdown of the companies which launched the most smart phones last year 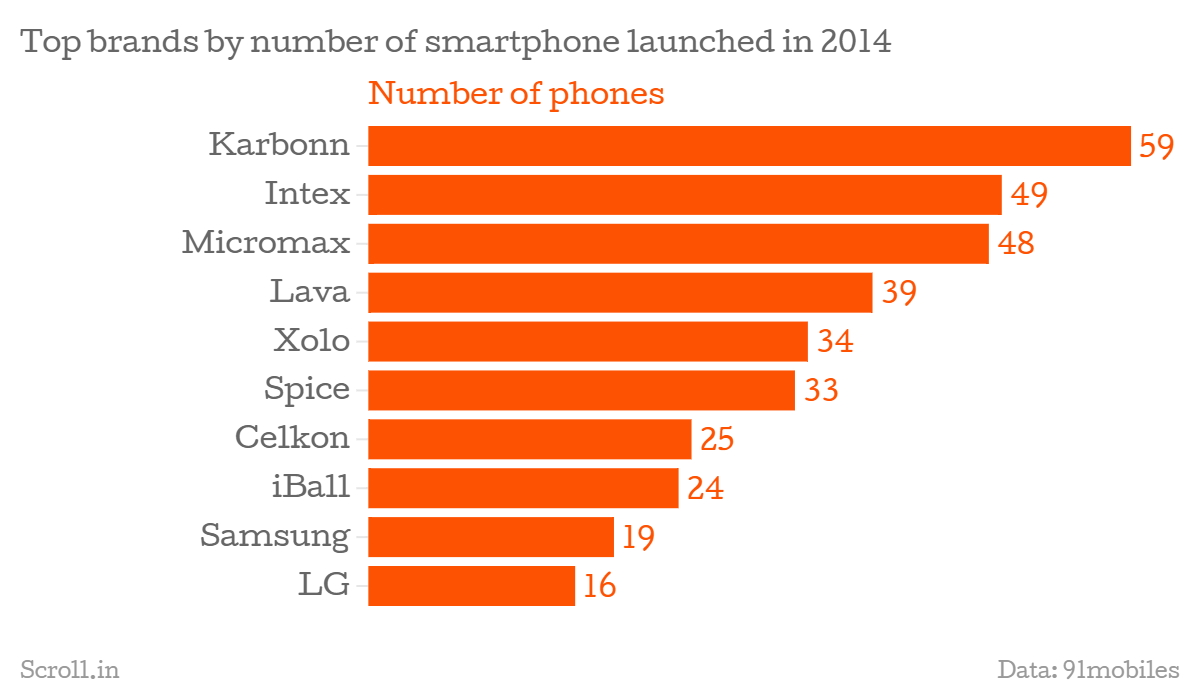 At the same time, people also seem to be showing a preference for slightly lesser expensive phones as the average sale price of smartphones came down to Rs 6,603 by December 2014 as compared to Rs 8,118 in the year 2013. This perhaps what explains the steep rise in launches catering to the budget segment of Rs 5,000-10,000.

Not only this, the long standing contention that smartphones are going to eat into the market for tablets also got an inch closer to reality as the overall tablet market contracted in the year 2014. The launches of ‘phablets’, large screen phones with extra features, on the other hand, saw a marked increase.