Contribute Subscribe
Ad
For the last two weeks, residents of Dharavi have been visiting an open exhibition that seeks to raise awareness of health issues. The 22 installations on display have been created entirely by the residents of Dharavi.  They can been seen in Colour Box, one of three venues of the Dharavi Biennale, which is now in its last week.

Apart from the art, the festival also had readings, plays and music festivals.

“Colour Box was built as a cabinet of curiosities that encourages visitors to interact with the exhibits,” said Benita Fernando, a member of the Society for Nutrition, Education and Health Action, the NGO that organised the festival. “The idea of a cabinet might sound Victorian, but this is more esoteric. We want to arouse the curiosity of the viewer.”

SNEHA, which works with several communities across Mumbai on issues of maternity care, child nutrition and preventing violence against women, has been in Dharavi since 2001.

“The biennale came about because we have been engaged with many people in the community to understand and report cases of violence,” said Nayreen Daruwalla, a programme director with SNEHA. “There is a lot of art and talent here, and it works because it is also about their area and their people, which helped.”

Three years ago, SNEHA organised the first version of the biennale, Dekha Undekha. This was a smaller project that sought to get local people to work with artists and health experts to create art that would address the health problems they tackled daily.

Both Dekha Undekha and the Dharavi Biennale are sponsored by the Wellcome Trust, a biomedical research charity based in the United Kingdom that supports among other things projects that encourage public engagement with medicine and biology.

The art boxes at the festival were made in workshops spread across two years. While mentors were artists from both inside and outside the community, only residents attended the workshops and they drove their conception. The boxes vary in scope, but are centred on the theme of health and wellness.

Here are some of them: 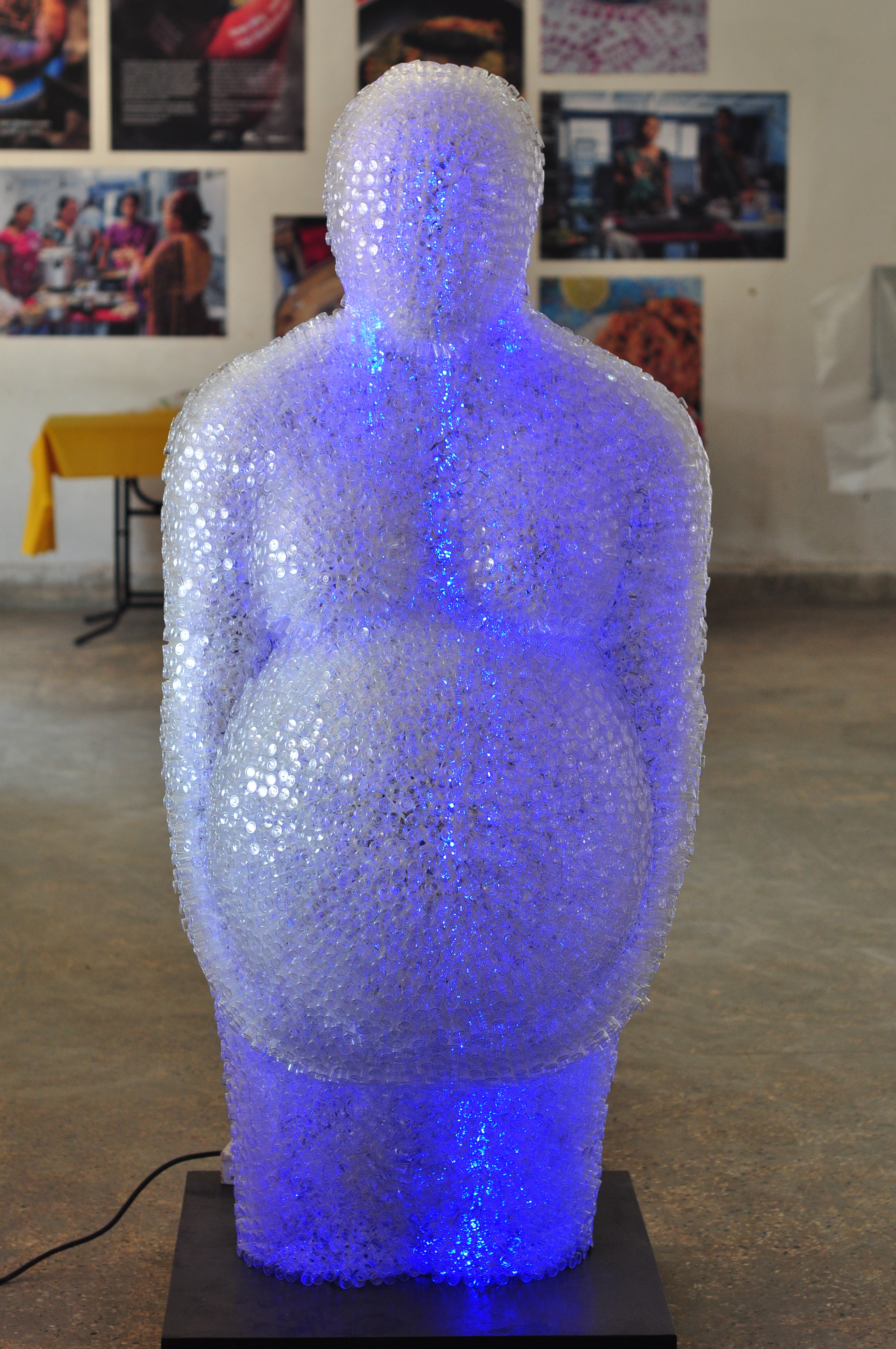 The only solo installation at the festival, Still Life by Vandan Kori is a life-sized pregnant woman made of 500 discarded surgical vials. The installation is a comment on the fine line between medication and over medication during pregnancy. 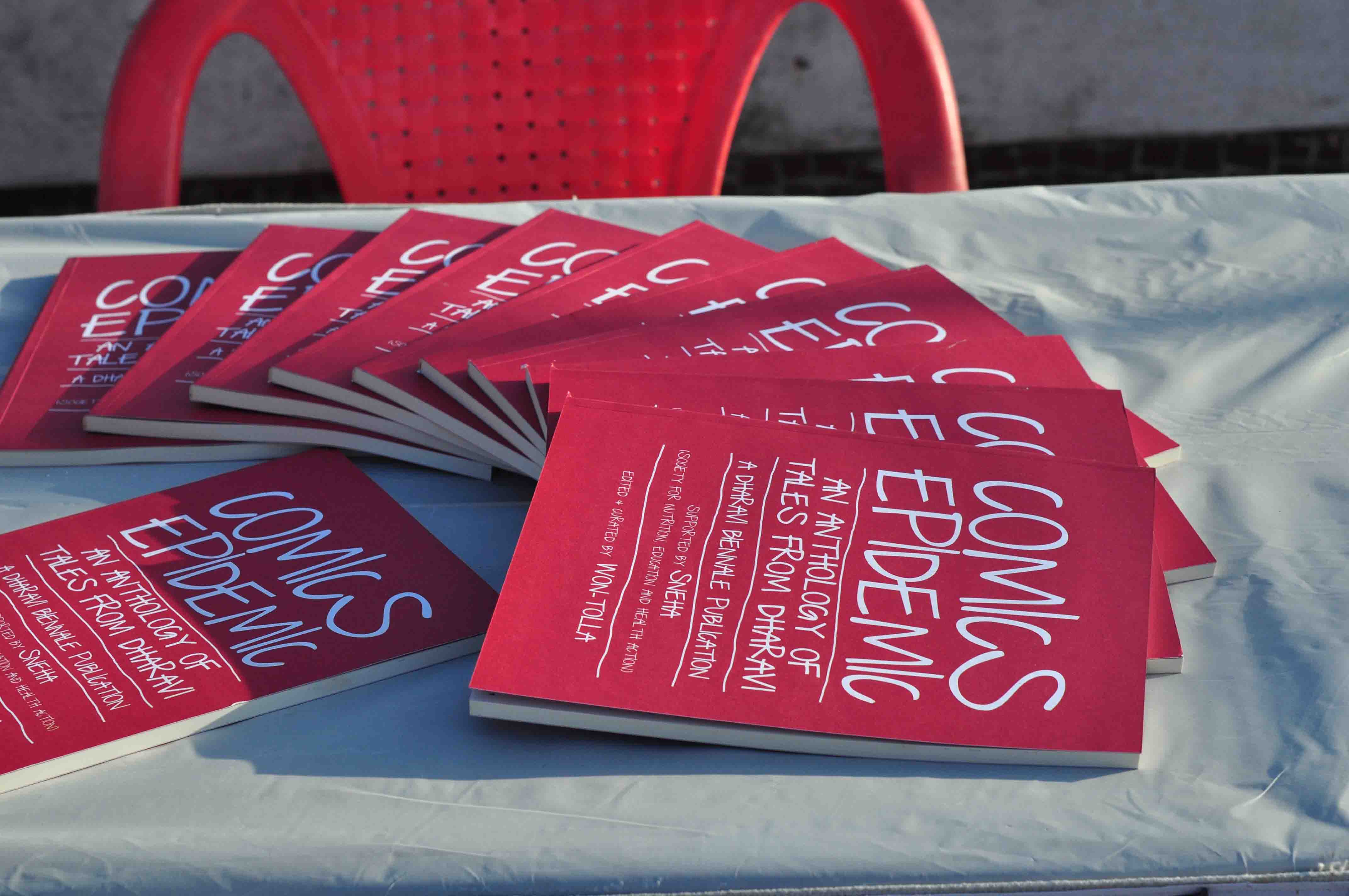 Artist Chaitanya Modak’s comic book workshop was meant for residents from the age of 13 to 25, but it also had older participants. Residents worked together over a weekend to create stories about health that included topics such as depression, sexuality, injuries, resilience and the aftermath of accidents. 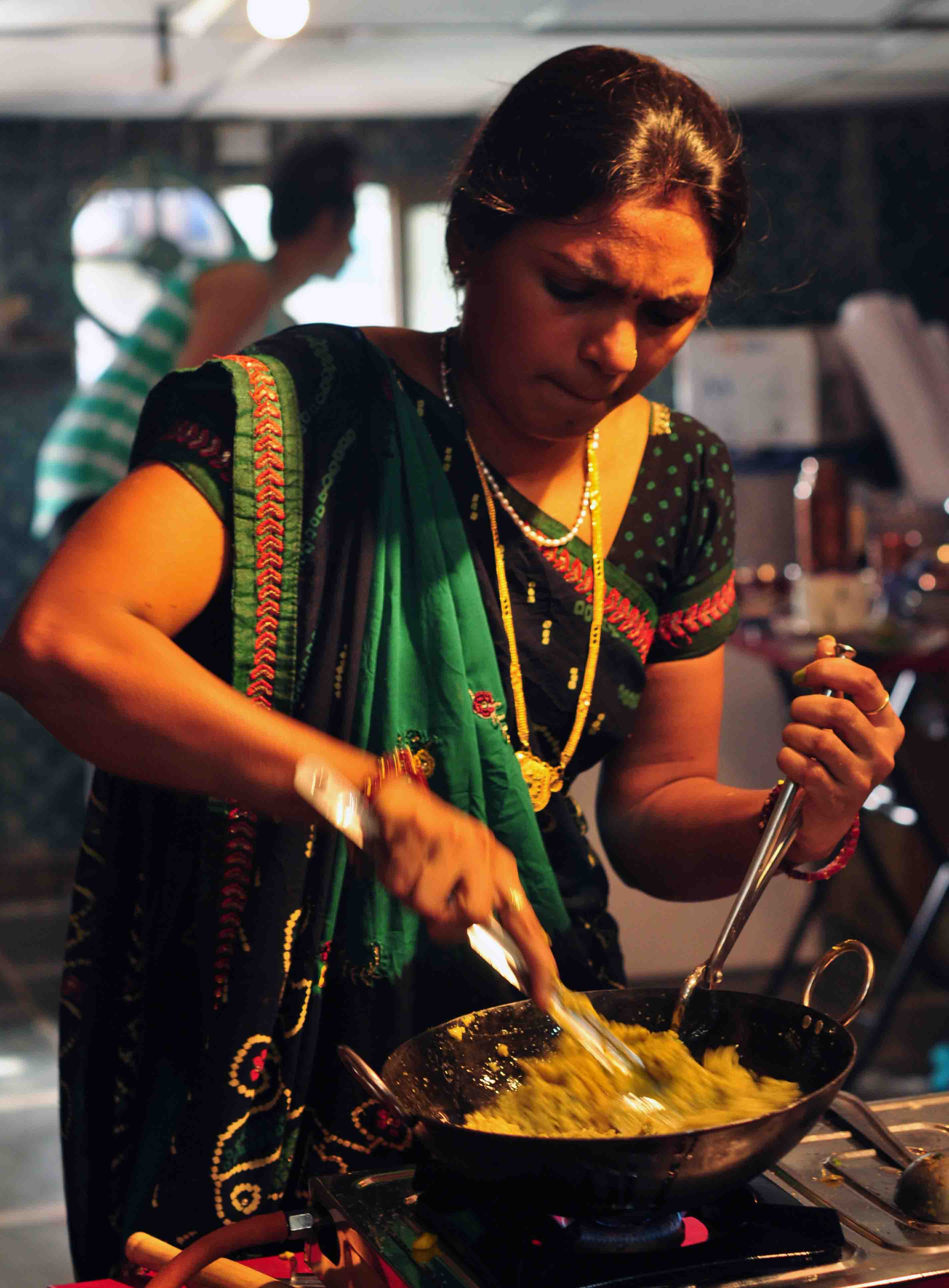 This recipe book made by eight women is a result of the Dharavi Food Project. For four months, these women worked together in a pop-up kitchen where they brought their recipes from across India and attended sessions on the relation between nutrition, health and even sexual pleasure. 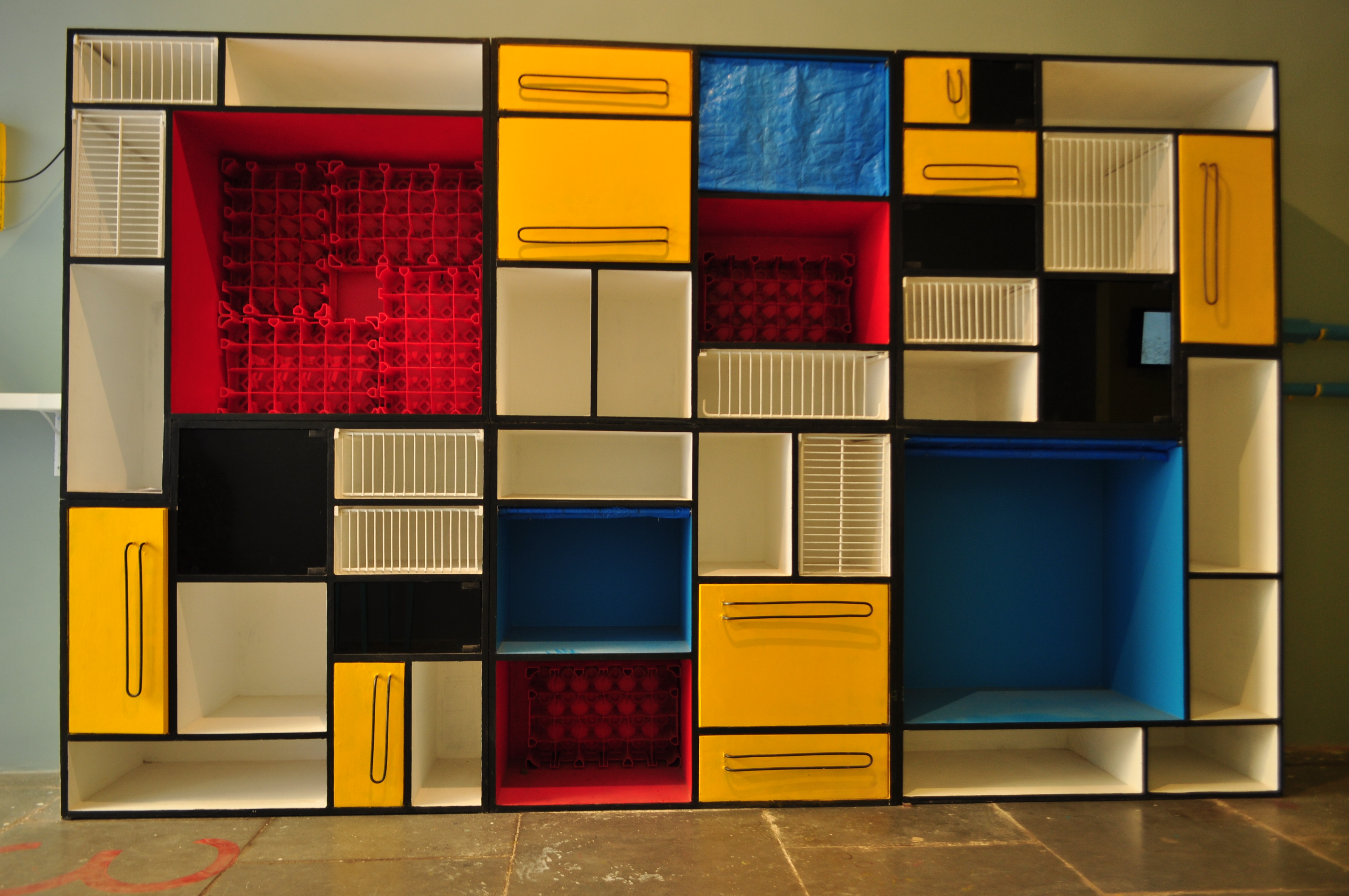 The installation is an alternate take on recycling. Instead of reducing objects to their raw materials and then reusing them, the exhibits here attempt to extend the function of objects. Wine glasses become lights in the shape of dogs, a car jack becomes a stool and a former shelf becomes a take on Dutch artist Piet Mondrian’s work. 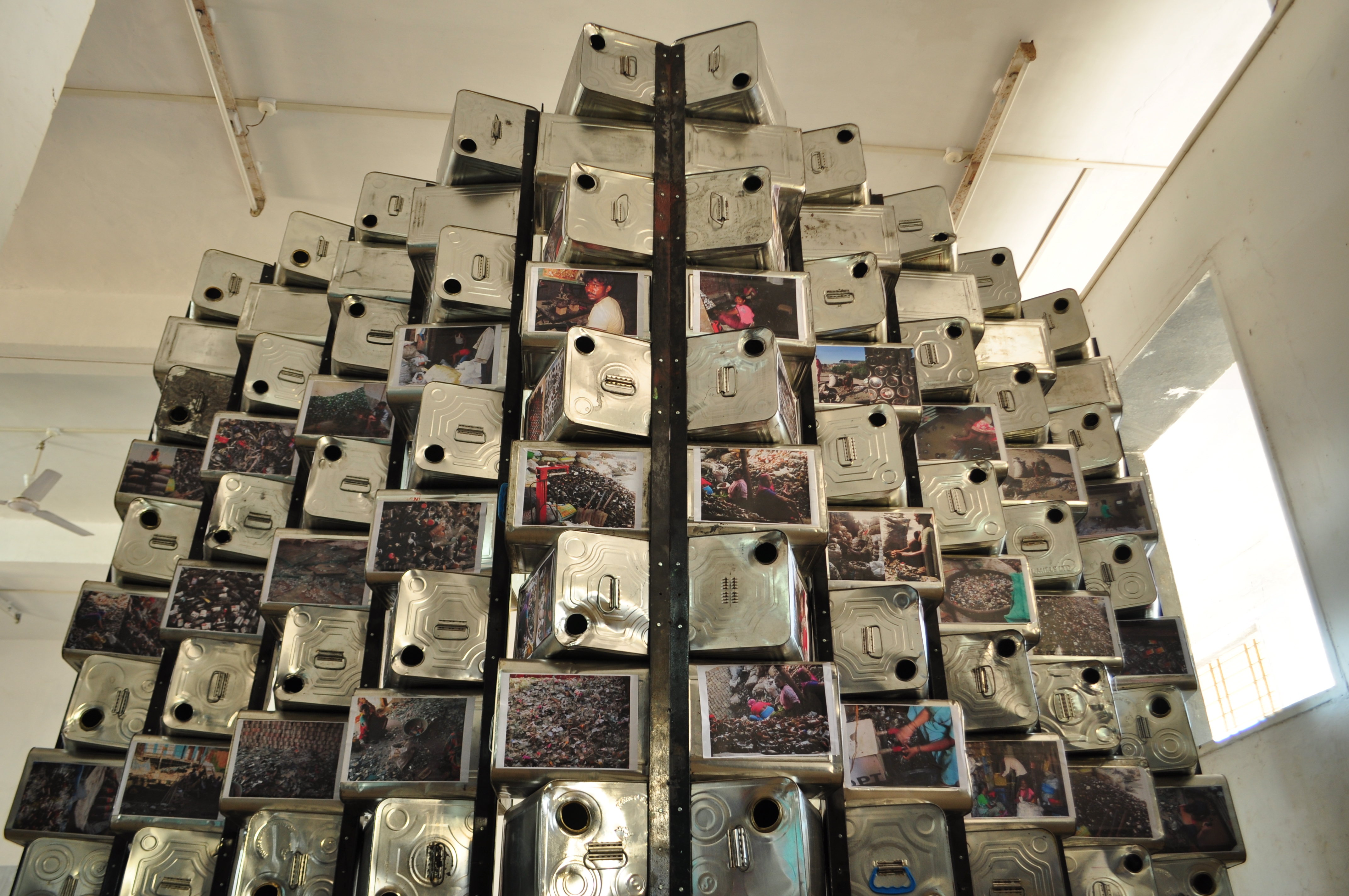 Artist Nitant Hirlekar sent children around the Dharavi photographing the positive and negative sides of entrepreneurship in the community. The children documented the myriad innovative industries in the area, but also the side effects that arose from working in cramped and insecure spaces. These photographs were then put together in an installation of 300 oil tins for people to examine.

The Dharavi Biennale will run until March 7 at three locations in Dharavi.