Contribute Now
Ad
It's going from bad to worse for the Aam Aadmi Party. Delhi chief minister Arvind Kejriwal may insist that he wants to stay above it all, but the little rumours of an internal rift have turned into all-out warfare for the young party that built its reputation on promising transparent governance. That transparency is now being forced up on it, as a function of an internal battle that is being played out across TV news bytes, leaked letters, taped phone calls and social media accounts.

I am deeply hurt and pained by what is going on in the party. This is betrayal of trust that Delhi posed in us(1/2)

The fight appears to essentially be a battle of divergent paths and differing ambitions cloaked in the robes of ideology and principles. Arvind Kejriwal, who has taken the pre-eminent position in the party, a status that he has enjoyed since the beginning, appears to be on one side, up against senior leaders Yogendra Yadav and Prashant Bhushan.

The decisive churning in AAP. It's clash of ideas between ultra left who demand referendum in Kashmir and pragmatic politics of welfarism.

Bhushan and Yadav have, in various forms, sold the fight as a matter of principles, particularly with regards to how the party deals with infractions by its own leaders. Bhushan had accused Kejriwal of turning AAP into a "one-person centric" party and accused him of overturning collective decisions. Yadav, on his part, was said to have disagreed with some of the candidate selection before the Delhi elections and objected to Kejriwal's push to stay only in Delhi and out of Haryana.

In the opposing camp, Delhi state secretary Dilip Pandey wrote to the disciplinary committee saying Bhushan and Yadav had conspired to challenge Kejriwal's leadership and replace him as national convener. Kejriwal, as a result, offered last week to resign from the political affairs committee of the party and, when the national executive expectedly refused to let him, asked for power to reconstitute the PAC. Most expect this to happen on March 4, with Yadav and Bhushan likely to be taken off.

Kejriwal's most famous radio spot remains the one where he encouraged the citizens of Delhi not to say no to people asking for a bribe. Instead, the Delhi CM told the listeners to do "setting" and tape them. The party appears to have taken that very seriously, revealing on Tuesday that it recorded a conversation with a journalist last year that is now being used to target Yadav.

The journalist claims Yadav had called an off-the-record breakfast meeting with a few press people and complained about the party's decision not to contest assembly elections in Haryana. Writing in the Indian Express, Chander Sutra Dogra says that an aide of Kejriwal's called her asking about a story she wrote that was critical of the party after which she told him that she got the information from Yadav.

"He said that the AAP was not considering rebutting my report, because that would amount to washing its dirty linen in public. Before ringing off, he told me that some people were harming the party from within. At no point during our conversation did he inform me that I was being recorded," Dogra said.

Yogendra Yadav, in a post on Facebook, claimed that the Indian Express has shied away from questioning the unethical behaviour of Dogra herself. He claims that she shouldn't have revealed her sources to an interested party and, moreover, that he never gave her any such information – which the Express knew. 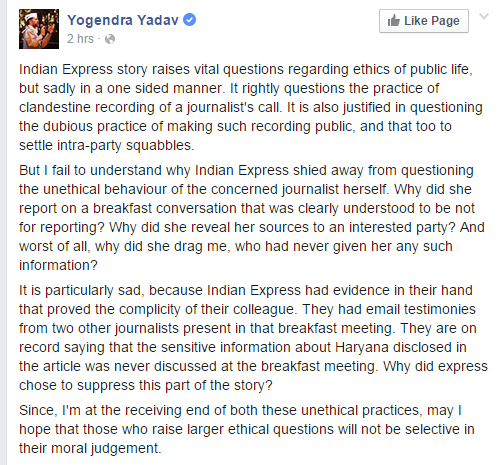 Around the same time however, fellow AAP leader HS Phoolka has also taken to Facebook to add another strand to the story. Phoolka claims that he had nearly quit the party last year because Yadav told him not to go to Punjab, not to speak to the press and left him sitting idle for more than a month ahead of Lok Sabha elections. In his post, Phoolka claims Yadav "wanted total control in Punjab" and even worked against his candidacy in Ludhiana. 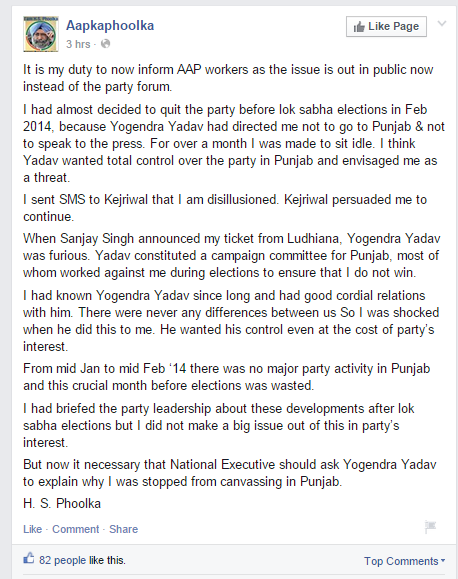 Now for the showdown

On March 4, the party's national executive will meet to reconstitute the PAC. Last week, Kejriwal had nearly agreed on a compromise with Yadav and Bhushan on how the party could move forward, according to senior party leader Anand Kumar. This compromise would have seen all new faces in the panel, leaving out both Yadav and Bhushan as well as Kejriwal camp leaders Manish Sisodia and Gopal Rai, who are cabinet ministers in Delhi.

But then Bhushan's letter was leaked to the press and his father, Shanti Bhushan, who also was a founder member of AAP gave an interview calling for Yadav to replace Kejriwal as national convener. Suddenly the warring factions were back at it, and the battle got even more ugly.

Prashant ji should have raised issue of personality cult in NE, to be held tomorrow instead in media.NE should have discussed/taken a call.

Shanti Bhushan ji sud explain why did he say Arvind to be replaced with Yogendra during elections and after NE meet.That is indiscipline.

Shanti Bhushan ji should also explain what was the conspiracy to replace Arvind with Yogendra ? Did it not tarnish the image of party ?

It is now down to Arvind Kejriwal to steer the ship, writes internal AAP Lokpal Admiral Ramdas in a column in the Economic Times on Tuesday. Kejriwal will get a chance to do this and more in the National Executive on Wednesday, but there is no guarantee that more skeletons will not tumble out of the closet before then.