Contribute Now
Ad
If there is such a thing as death by popularity it may well explain what is happening to Jane Austen. Once pivotal to the English canon (the greatest female writer in the English language: period) Austen has been adapted and readapted so many times for Hollywood and Bollywood and this stellar popularity seems to be coming at a cost.

Take, for example, the following lines pulled from an article written to celebrate the Austen anniversary, in which the (male) author alleges that the sheer marketability of Austen has caused him to “rethink” her position in the history of the novel:

Not recant, but revise, re-envision, recontextualise her work’s place within the pantheon of other great literature. After all, if she can be turned into a nicey-nice dispenser of advice on how to become a smug, self-admiring prig, can she really be that great?

Indeed, only yesterday in my creative writing class a student expressed the fear that her love of Austen’s work would be dismissed by other students as a devotion to “corny rom-coms”.

I’ve written elsewhere about the ways in which the plethora of Austen adaptations have redrawn the lines between high and low culture. I have even speculated that, in the qualitatively new, technologically enhanced, media culture we inhabit, Austen’s celebrity status should be analysed less via a logic of authorship than a logic of branding.

But I can’t help wondering if the transformation of Austen’s contemporary image is as much the consequence of a gender agenda. Ever since the “Darcymania” of the 1990s – ignited on a memorable day back in 1995 when the London Times described Colin Firth’s Mr Darcy by declaring that his “breeches were so tight” the viewer could “almost see the spare change in his pocket” – Austen appears to have been progressively marginalised as a girls-only writer.

Back in the day, when I sat for the NSW HSC I studied every single Austen novel. Today, only Pride and Prejudice (1813) is set for the NSW HSC and only Persuasion (1817) is set in Victoria. At university, all the boys in my literature class were obliged to read Austen. Even if some of them may not have appreciated Jane as fulsomely as they might, they may well have agreed with Lionel Trilling that:

Not to like Jane Austen is to put oneself under suspicion of a general personal inadequacy.

Of course, Trilling famously didn’t like Austen. In his opinion, she got too much attention of the “wrong sort and given by people of the wrong sort”. Nor did he like the “emotional tone” of the earnest young men who crowded into his Austen seminar. But at least the men came. 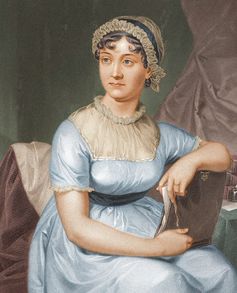 Colourised version of a 1873 re-engraving of Austen. Wikimedia Commons

Today, the eminent scholar at the university up the road from me lectures on Austen to an auditorium from which all the earnest young men are conspicuously absent.

I also teach Austen in a very different kind of course that examines Austen adaptations from rom-coms to webisodes and comic books (yes, even Marvel boasts a series dedicated to Austen). Students think about the distinctive traits of Austen fans – as opposed, for example, to Star Trek fans – including the ways in which male fans of Austen are so often produced as cultural oddities in ways that work to entrench established gender norms.

One of the most interesting aspects of Jane Austen’s critical heritage is the fact that her critical fortunes have so often fluctuated in inverse relationship to the size of her (female) audience. Unlike William Shakespeare, whose stature seems to grow with every production – regardless of its quality – Austen periodically runs afoul of a particular kind of cultural hypocrisy.

That hypocrisy regularly expresses itself in English literature curriculum documents from high school onwards, whereby books written by men are perceived to be suitable for both girls and boys and books written by women are apparently not.

Jane Austen was not always this famous. She was incorporated into the English canon in 1948, when F.R. Leavis – in the opening line of The Great Tradition – indelibly wrote that Austen was one of the four greatest writers in the English language.

Before Leavis, critical estimates of Austen’s work – invariably given by men – were too often withering. Her popularity among female readers registered as a principle point in critical attacks.

Henry James, for example, complained that the fervour for Austen was incited by “a body of publishers” who found “their dear, our dear, everybody’s dear, Jane so infinitely to their material purpose”.

He further lamented that a “special bookselling spirit” had driven Austen’s reputation beyond that which – in James' opinion, at least – it actually deserved.

Horrid appraisals also came from the likes of EM Forster, who wrote:

I read and re-read, the mouth open and the mind closed. Shut up in measureless content, I greet her by the name of most kind hostess, while criticism slumbers.

Indeed, Austen’s critical heritage is strewn with men who – like Nabokov, for example – “discovered” Austen at “mid life” and in the most patronising tones imaginable. In more recent times, male writers – such as Martin Amis, who is on record as a great lover of Austen – too often use their newfound love as a stick to beat “lesser” women writers.

Austen was not a feminist. She lived in an age before feminism was invented. She was not interested in politics, and the social iniquities of her day seldom materialise in the pages of her work.

But to read to opening scenes of Pride and Prejudice – even today – is to be constantly struck at how fresh and thoroughly modern is her prose.

In the history of literature, Austen serves as continuing testimony to the fact that a great writer with a huge popular following appears to be something of a paradox.