Contribute Now
Ad
On the surface, the violent, adult-rated thriller NH10 appears to be going over familiar territory – an urban couple losing its way in the backwoods and encountering various horrors; a lone woman in distress forced to discover courage and survival skills overnight; a clash of cultures and classes that ends badly for both. Gurgaon yuppies Meera (played by Anushka Sharma) and her husband Arjun (Neil Bhoopalam) see a face of India that is not reflected in the glass surfaces of the high-rises in which they live, work and party. The couple runs into serious trouble during a weekend getaway, and Meera is being forced to flee for her life, with no help in sight.

Yet, director Navdeep Singh's March 13 release is not a retread of such films as Deliverance and Eden Lake. Singh and co-writer Sudip Sharma hang the genre-driven narrative onto another, equally familiar horror – the unlawful practice of honour killings in Haryana. Meera and Arjun are witnesses to the murders of a young woman and her husband from the same clan as hers. As Satbir, the brother of the slain Pinky, and his cohorts, hunt down Meera and Arjun, the filmmakers pit two irreconcilable Indias against each other.

Navdeep Singh’s second movie after Manorama Six Feet Under in 2007 takes him back to the wilderness, literal and metaphorical, that exists beyond India's metropolises. Singh’s debut was warmly received, but he has struggled to get his projects off the ground since. NH10 is a collaboration between Anushka Sharma’s recently established company Clean Slate, Phantom Films, and Eros Entertainment. Singh spoke to Scroll.in about tweaking genre elements to offer a commentary on what he terms an unconscionable crime – the silencing of individual dreams by the community.

How did NH10 originate?
It was supposed to be a quickie. Sudip and I were supposed to work on another film, Rock the Shaadi. Then we were to do Caneda, which was a two-hero project, but it didn’t happen. We wrote NH10 in 2012 as a heroine-oriented project, with the idea of doing a simple and small story that would be well told, but the film has had a long journey since.

What were the challenges in getting NH10 off the ground?
We thought of a linear, relentless thriller that would be relatively easy to mount, but it wasn’t easy getting an A-list actress attached. We thought that after Kahaani [Sujoy Ghosh’s thriller in 2012, starring Vidya Balan as a vigilante] this would be a dream role for any heroine, but it was difficult. We had approached Anushka Sharma back then, but she was busy. We approached a couple of other actresses and Freida Pinto, but it didn’t eventually happen. Then Anushka came back on the project. Her brother Karnesh liked the script and was fairly instrumental in pushing the project through. Every day is a learning process in this film industry.

The movie combines genre pleasures with social commentary.
It’s a combination of the woman in peril and a road trip gone wrong. I am a huge fan of genre films, but a film like this one could easily slide into a B-movie – all we had to do was throw in a couple of hot pants and dip the woman in the pool. Having a real take on the subject elevates it to something more that I wanted to deal with, rather than a mere exploitation movie.

It is an abiding concern of mine that we live in many Indias, not only two, and these Indias very often rub badly against each other. The story partly stems from travels as a younger person where one has witnessed things turning on a dime and going suddenly bad. In parts of North India, especially, there is a constant threat of violence where things can spin out of control, especially where there is a cultural collision.

NH10 is bound to be compared to such films as Eden Lake.
Yes, Eden Lake was a reference, so also were Deliverance, Wolf’s Creek and The Last House on the Left. We also watched a lot of B-movies whose names I can’t remember, just to get a sense of the genre elements.

But we wanted to use the genre elements within a believable space. One is the foolish decisions that happen at a couple of points, which escalate the matter. The backwoods aspect is also something a number of these films address. Then there is the violence. But the idea wasn’t to romanticise the violence or glamourise it through slow motion, but to make it gritty and brutal and generate disgust.

The arid landscape of Haryana, with its sparse habitation, mines and quarries, form a vivid backdrop to the story.
I wanted to shoot the entire film in Haryana. We shot for 15 days there, but it was nasty, so we shifted to Rajasthan. A lot of the Haryana landscape is all mines and quarries, many of them illegal. You see this endless stream of trucks carrying stones and construction materials as soon as you get out of Gurgaon. 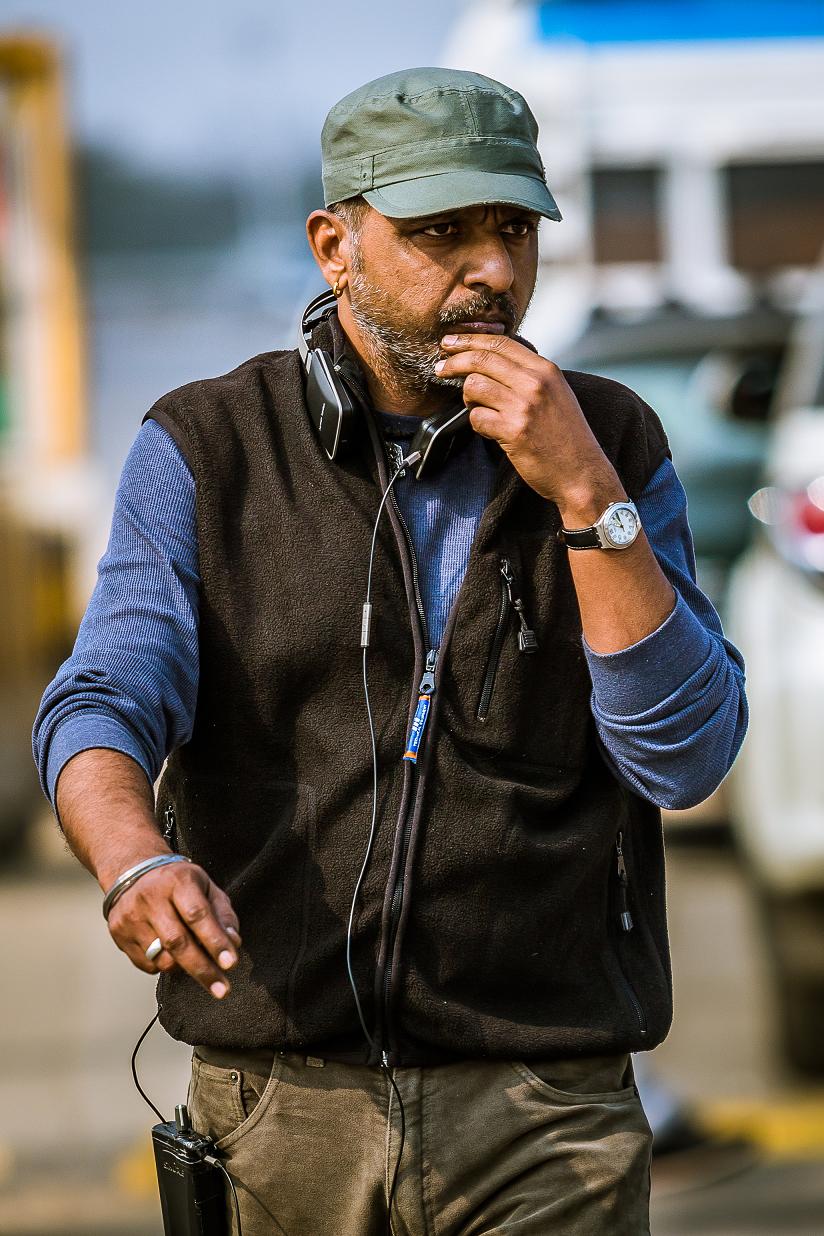 Arjun’s character has a sense of entitlement, which is what gets the couple into trouble in the first place.
Arjun does have a sense of entitlement, but so does Meera – she is seen at the beginning making a presentation on selling sanitary napkins to women in the villages. For her and the people in the room, the rural areas represent nothing more than a market. They are as disconnected as the middle classes tend to be. If we had pushed this point further, it would have made the characters less commercial and likable.

If I were to do this on my own, I would have made the film more violent and brutal. We are probably luckier we didn’t end up doing that. In any case, the reality is way more heinous. We read about a guy who was cut into 30 pieces and the pieces were dropped off in front of his parents’ house. This is stuff that you simply can’t show in a movie.

In one sense, Meera pays for decisions taken mostly by men, whether it’s Arjun or Satbir, the murdered woman’s brother.
Meera is this woman who is trapped between two different notions of male honour. Women tend to become instruments of a male sense of honour one way or another.

Meera is a strong woman within her environment, but outside of it, she isn’t, and the movie is about how this affects her. She has to take charge and discover her inner strength. Her first reaction is to find cops and the sarpanch of the village. In the city, you tend to turn to established figures of law and order, but beyond her comfort zone, she has to play by other rules.

Among the suggested titles for the movie were “Kali” and “Durga,”, but I didn’t want to use any mythic references, except for one to the Satyavan and Savitri story [in which Savirti saves her husband from the jaws of death]. I consciously wanted to stay away from the image of a woman as a vengeful goddess, which itself is a potential trap.

We see two worlds in NH10 – the Gurgaon that houses Meera and Arjun, and the rest of Haryana where honour killings are an accepted practice – but nothing in between. Where is the middle ground?
An early version of the script had a more clueless middle-class couple that didn’t have the time to think about the world outside of their cocoon.

Sudip’s and my take on Gurgaon is that it is a frontier town, but just a few kilometres  outside it is this other world where the writ of the state doesn’t really exist and the rules are different. That’s partly why we stuck to Haryana – we didn’t really want to spell it out and give a message or a lecture, but we wanted to make Haryana the shorthand for the larger issue.

There is no middle. To be honest, I did try to achieve this, and I don’t know if it comes across. There’s the mentally challenged character [one of the hunting party members] who is, in a sense, a victim himself. We didn’t want to stress this because of the format of the genre, but the fact is that he is a victim of the culture he is born into. During our research, we met a number of people from Haryana, including villages where honour killings had taken place. In a weird way, you can understand what would happen if somebody from your family married within the gothra [clan] because it would become very difficult survive. That’s why we have the cop’s character, who gives Meera a lecture on how things work in his part of the world.

The movie could be possibly seen as one-sided, as representing the viewpoints of Meera and Arjun at the risk of demonising the other characters.
Yes and no. I feel that we could have been more one-sided by underlining the horror or thriller aspect of the story. I think we have been reasonable given the limitations of the genre. The viewer is with Meera’s class and is rooting for her, and that is also what the producers wanted.

There could be a separate film about the brother, Satbir, and what he has gone through. We didn’t want to be preachy, but having said that, it would be interesting to understand the context of why these people do it. We did try to be even-handed. Hopefully some of the stuff in the film will get picked up, such as when Satbir’s mother Ammaji, played by Deepti Naval, is going through the contents of her dead daughter’s cupboard.

The fact is that honour killing is such a heinous act that to try and justify it is close to impossible. There are cultural pressures, sure, but you can dissociate yourself from a daughter and son without killing them. Whatever these people are doing is wrong, and there is no way you can endorse that. You cannot address caste in the movies, but honour killing is wrapped up in caste. The notions of honour are entirely cultural.

I am anticipating criticism, but it is unfounded in this case. If you are liberal-minded, it is not entirely possible to condone such acts. The individual victim’s point of view is as important as the family’s honour, and you have to take a stand. We have a legal system and a constitution that are supposed to protect individual rights, and there can be no debate or moral relativism on the subject. To take someone’s life is beyond the pale.

Could the movie have done without songs in the background?
Again, yes and no. If you are making a film for the Hindi film industry, you have to address these compulsions. There was a demand to have lip synced songs, but we rejected it. If I could have, I would have used pre-existing songs, which I feel can bring a certain emotional quality to scenes. Until producers and distributors figure out how to market films without having the crutch of songs, the demand is there and it is difficult to resist.