Contribute Now
Ad
A long-awaited report on electoral reforms issued by India’s law commission has failed to introduce a ceiling on poll spending by parties, perhaps the most serious lacuna in the country’s political system because it gives a huge advantage to those supported by the wealthy.

The report, released last week, has retained the ceiling on what individual politicians can spend in their constituency at between Rs 54 and 70 lakh, with the exact value depending upon the size of the electoral area. But in the absence of a cap on what parties as a whole can spend to promote themselves before an election, these limits on individual expenditure will make only a slight difference in creating a level-playing field for all parties.

In the 2014 general election, the Bharatiya Janata Party, which swept to victory, spent Rs 714 crore and the ousted Congress spent Rs 516 crore, according to the data they filed with the election commission. All parties must file this information within 90 days from the last day of polling. But one estimate pegs the BJP’s spending just on advertising at seven times the total official amount, at around Rs 5,000 crore.

The law commission, an executive body set up to advise the government on legal reform, has, however, attempted to improve disclosures on the sources of funding – perhaps the next-most important electoral reform, one linked to overall transparency in the political process. The Association of Democratic Reforms, a non-partisan advocacy group, estimates that nearly three-fourths of national parties’ total income now comes from unknown sources.

The main loophole with disclosure was the fact that while parties had to reveal to the election commission the names of donors who gave amounts greater than Rs 20,000, they did not have to do so for smaller sums. In order to avoid disclosure, parties therefore often broke up larger donations from one source into parcels of less than Rs 20,000.

But the report has now clarified that parties must reveal the identity of an entity or individual who donates more than Rs 20,000 in all, which means parties cannot resort to the sleight of hand of passing off big donations from one source as smaller ones.

Moreover, parties will now have to reveal sources of donations even if they are less than Rs 20,000 each in denomination if the total funds collected in these smaller amounts crosses Rs 20 crore or 20% of the parties’ total income, whichever is less.

The Bahujan Samaj Party, for example, has used this loophole for eight years in a row. In 2013, it declared that it had received Rs.307.31 crore from voluntary contributions between 2004 and 2013 but did not disclose any of the donors’ names, claiming that none of the amounts were more than Rs 20,000. 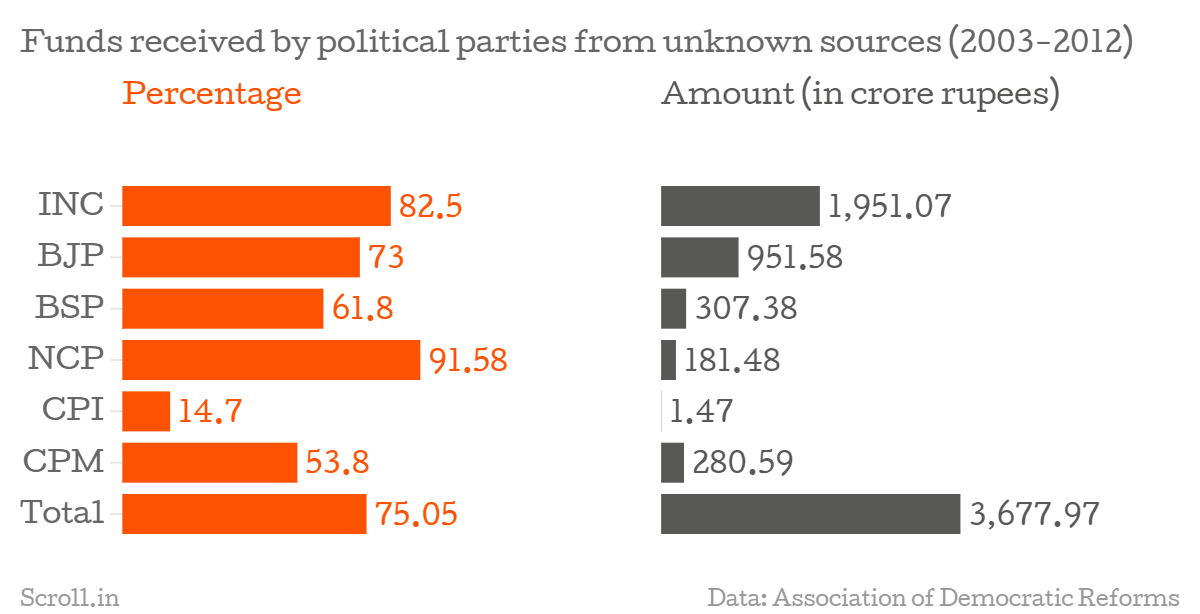 Parties will attract heavier penalties for not filing information or not doing so on time. If the election commission finds a party to have willfully filed wrong information, it can now levy a fine of up to Rs 50 lakh.

A candidate who fails to file the necessary information within 90 days after the end of a general election can be barred for five years from contesting an election, instead of three previously. The fine for political parties who fail to file information on time will be Rs 25,000 per day, up from Rs 10,000, and they could also lose tax benefits.

Given that none of the major parties filed expenditure statements on time after the 2014 general elections, these higher penalties could help. The deadline to file expenditures was August 26, 2014, but the two major parties, namely the Indian National Congress and the Bharatiya Janata Party, filed their expenses only in December and January respectively.