Contribute Now
Ad
Despite all the inimical noises made by the current government, the Mahatma Gandhi National Rural Employment Guarantee Act has survived. The budget recently allocated to it by Finance Minister Arun Jaitley confirms the government is not willing to axe the scheme – at least not this year. But does that rule out its erosion? Prime Minister Narendra Modi’s repeated denigration of the NREGA as a programme under which poor people dig ditches mocks the labours of the nearly 80 million people who toil under its aegis. By disparaging the scheme, he also ridicules his own government’s data.

NREGA’s official website reveals that over 45% of all works taken up under the scheme entailed provision of rural sanitation. Construction of irrigation facilities for Dalit, adivasi and other impoverished farmers comprised 13% of the works, while land development works on the farms of poor landowners made up 9% of the total. Rural connectivity works made up a further 11%, while the creation of water conservation and water harvesting structures (presumably what the prime minister had in mind when he spoke of digging ditches) comprised 7%. 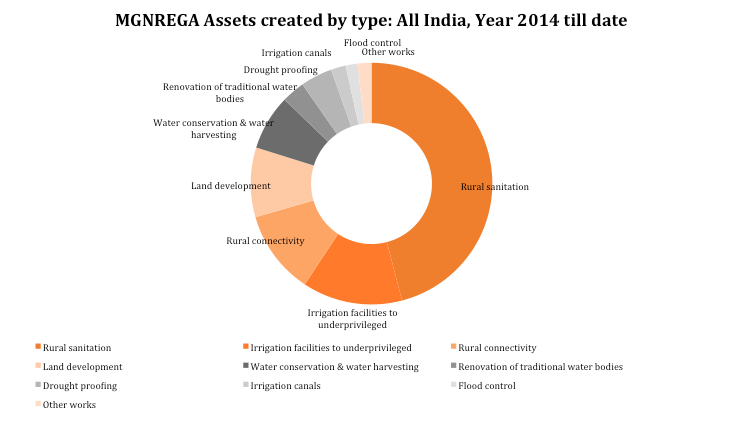 This is what the official data says. Voices from the ground equally rebut the prime minister.

If Modi had met the sarpanchs in his home state, he would have appreciated the programme’s value to them. In Gujarat’s Veraval district, the sarpanch of Malondha Gram Panchayat told me about the culverts constructed by workers using NREGA funds. Neither he nor the NREGA workers thought that the programme was a waste, as the epithet of digging ditches implies.

Likewise, in Bihar, NREGA workers always refer to themselves as labourers, majdoors, whose hard work is developing India. “Majdoor ke paseena sookhne se pehle usko majdoori milni chahiye (A labourer should get his wage before his sweat dries),” Kulanand Mandal told me outside his mud hut in Bihar’s Araria block. In neighbouring Bhargama Gram Panchayat’s Ward 1, Sapuri Rishi toils on an afforestation project on a plot of land owned by a family living “below the poverty line”. Like Kulanand Mandal, he insisted that he is a labourer whose sweat and industry contributes to India’s development.

The prime minister’s mocking comments reflect the attitude of his voluble supporters among the middle classes and elites who think the scheme a waste. Their outlooks could not be more removed from reality and the perceptions of NREGA workers.

It is rare for individuals to work for more than 23 days a year on average under the NREGA (the average per household is 46). For most of the rest of the year, they earn a living elsewhere – in agricultural labour, on construction sites or brick kilns, as loaders carrying weights of up to 25 kilograms from trucks and trains, as vendors of vegetables and trinkets or garbage collectors in urban areas.

As far as the workers are concerned, the few days they labour under the NREGA is more productive than any of the other streams of work they engage in.

Moreover, the scheme offers a great additional gain: it strips away labourers’ dependence on farmers, allowing them to lead dignified lives in villages. For workers, this is a treasured independence despite the frequent delays in NREGA wage payments. It lets them bargain with farmers for higher agricultural wages.

It is true that labourers’ claims sometimes threaten farmers, especially the poorer ones who face high input costs, and such farmers are unable to meet the demands for higher wages. But recognising these constraints, many panchayats across India have utilised NREGA budgets to improve land and irrigation facilities owned by small and marginal farmers, the ones most threatened by cutbacks in agricultural subsidies as well as increased demands for labour. As the graphic shows, over 20% of all works under the NREGA pertain to such improvement works that benefit both agricultural labourers as well as poor farmers. Does this win-win situation not appeal to the prime minister?

It certainly does to his party’s chief ministers. In Chhattisgarh, a state governed by the Bharatiya Janata Party since 2003, nearly 60% of all NREGA activity relates to improvement works and land development that support agricultural labourers and poor farmers. Likewise, in Madhya Pradesh, another state governed by the BJP since 2003, nearly 40% of all NREGA works are of similar nature.

There was a thread of continuity in Modi’s derisory comments, which reflected the attitude adopted by the Congress party. While inaugurating the NREGA in 2005, the Congress gifted to it the awkward term wageseeker, implying that NREGA workers were beneficiaries, or labharti in Hindi. Such a view blinds the politicians of the two parties to the value that the assets created under the programme hold for the inhabitants of the nearly 250,000 gram panchayats in the country.

Jaitley’s budget makes remarkable promises about increasing rural credit and furthering off-farm opportunities in rural areas. These promises are to be welcomed. Whatever be the provenance of the programme, to say that it will be a memorial to the Congress’s failures stigmatises the hard work of NREGA labourers. The prime minister is free to score brownie points over his political adversaries. But, in doing so, must he denigrate the contribution of NREGA workers to India’s development?

Despite contributing a fifth of Pakistan’s GDP, Karachi still gets short shrift from the government