Contribute Now
Ad
In March 2014 medical personnel in West Africa suddenly realized that the disease that had suddenly been killing healthcare workers in the region was Ebola. By that time the virus had already been spreading for three months through a region that was thoroughly unprepared to deal with it. One year later, Ebola has killed more than 10,000 people most of them in Guinea, Liberia and Sierra Leone. 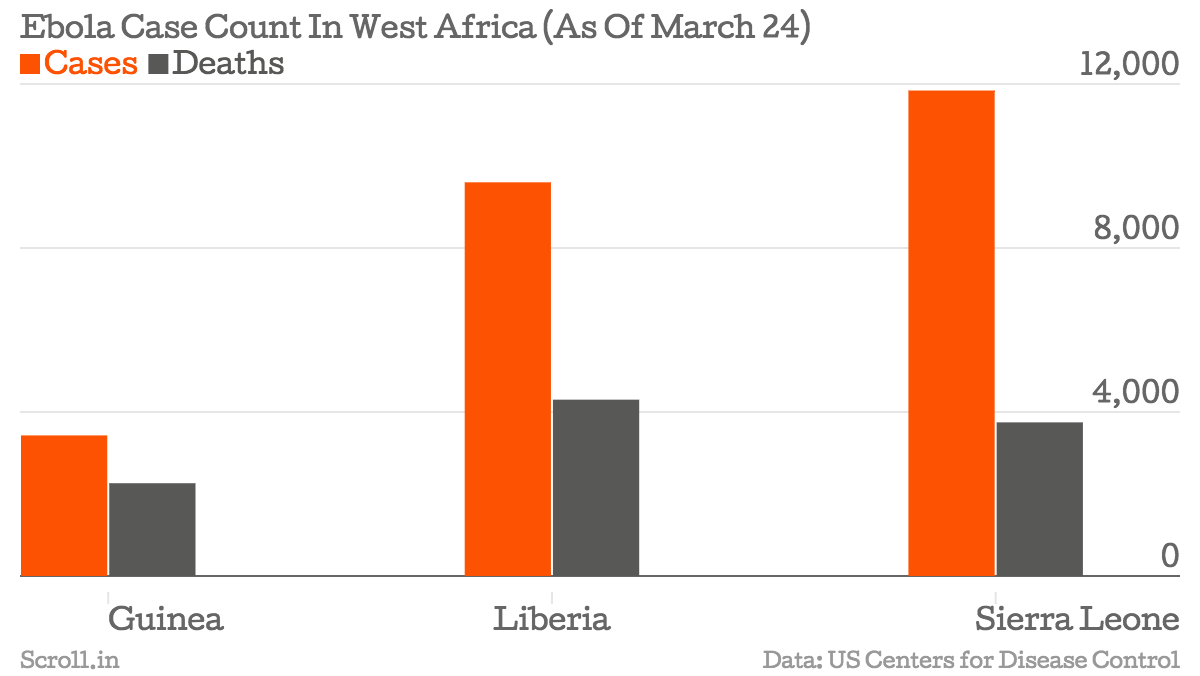 The predominant reason for the unprecedented scale of the outbreak was a failure of the West African governments to act, says a new report by humanitarian organization Doctors Without Borders better known by its French initials MSF (Medecins Sans Frontieres). They were slow to recognize the severity of the outbreak and when they finally did, they were accused of scaremongering by other countries and international organisations. Previous Ebola outbreaks had been small and MSF initially had only 40 doctors who had the experience to handle the disease.

The world took notice of the epidemic when cases were reported in August from the United States and Spain. Ebola had crossed the ocean. It started to spread across the African continent too into Nigeria, Mali and Senegal. That's when the real worry started: What if Ebola came to the populous and poverty-stricken India?

India responded to the Ebola threat by calling on previous experience in contending with epidemics like SARS and H1N1. The government designated hospitals in state capitals and major cities as Ebola management centres, asked states to form rapid response teams that were trained by World Health Organisation and US Centers for Disease Control experts, set up screening at international airports and 24-hour Ebola helplines.

Had there been an outbreak, India had the capacity to contain it better than West Africa but was nowhere near as well-equipped as the US, said Manish Kakkar, senior public health expert with the Public Health Foundation of India. Fifty nine percent of Ebola patients in West Africa died. Of the four cases reported in the US, one patient died.

In a newspaper column last November, Harvard University professors Ashish Jha and Tarun Khanna asked that India focus on educating the general population. Noting the communication failure in West Africa they argued that that proper risk communication “would show that the government is preparing for the disease and would help citizens to understand what their leaders are doing, and why. Second, if and/or when the disease strikes India, having had a clear messaging campaign in the weeks prior will allow healthcare leaders to provide context for the outbreak and create greater trust in the response.”

India’s risk communication over Ebola had much scope for improvement, said Kakkar. “Even during the hype about Ebola and even after it settled down globally and nationally, you could see that there was lack of clarity even among specialist physicians in Delhi government hospitals about what is the risk of the disease entering the country, spreading in the country, what are the measures that one is supposed to take and so on,” he said.

Training public health personnel in India on how to deal with specific diseases doesn’t happen in a regularly  but generally only after the disease strikes. In India in the past few months, instruction on how to deal with Ebola has become lower priority than dealing with more imminent threats like swine flu. “Our training programs are very specific, are limited to one or two diseases and need a lot of manpower,” said Jugal Kishore, professor of public health at Maulana Azad Medical College in Delhi. “It is possible to include it in the curriculum for doctors and nurses at the MBBS level but if it is not a common disease it is not part of the curriculum also.”

Ebola has been on the decline with less than 50 cases being reported every week in Sierra Leone from 500 in December. The UN mission for Ebola is hopeful that the scourge will end by summer this year. Still, medical lapses are delaying the end of the epidemic. Doctors in Guinea were recently infected after failing to take basic precautions while treating patients and frustrated citizens are protesting burial protocols aimed at preventing the spread of infection.

Why was ‘Ebola-free’ survivor quarantined in India after viral traces in his semen?