Contribute Now
Ad
“I found that the way Pakistanis hold conversation is very polite and there is a distinct sense of respect or tehzeeb in their conversation,” said Anupama Joshi, a teacher from Dehradun in India, while describing her interaction with Pakistanis while visiting the country with a 29-member delegation in January.

“Contrary to the view that women are not seen in public places, I found the Pakistani women to be very liberated.”

The cultural trip was part of the "Exchange for Change" programme organised by The Citizens Archive of Pakistan and Routes2Roots. The programme aimed at clearing misconceptions, giving youth from both countries a chance to experience life on the other side of the border (the group from Pakistan visited India in February).

More recently, a group of Pakistani students from the Lahore University of Management Sciences visited India and were similarly struck by the similarities and differences in life across the border.

The "Exchange for Change" delegation from India was mainly students and teachers who visited Lahore, Islamabad and the archaeologically-rich Harappa and found the entire experience “exhilarating”.

“I think the food, language, the way we dress, especially the women, is fundamentally the same,” said Joshi. “I felt more at ease in terms of language and food in Lahore than I do at my in-laws place which is in south India and I come from northern India, which shares a lot of similarities with Lahore.”

Most of the students could not find any cultural difference at all, with one student from New Delhi, Agastya Shetty, saying, “Visiting the museums made me actually realise that our history is essentially the same.”

Regarding the welcome extended by Pakistanis during the trip, Agastaya said he was pleasantly surprised.

“When the Pakistanis found out that we were from India, they went out of their way to see if we needed any assistance and would regularly check on us.”

During the delegation's visit to the schools in Pakistan, Agastaya said he found uncanny similarities in attitudes and views while interacting with students. "While visiting Islamabad I had an amazing conversation with a student, we shared the same interests, be it supporting a football club or judging all Bollywood movies... I felt this sense of serendipity, which I would love to have again."

From Lahore to Delhi

Sapna Ali Hassan, a 13-year-old student from Islamabad, was part of the delegation from Pakistan that got a tour through the cities of Delhi, Agra and Jaipur. She said the food she had in India could not have been more similar.

“We had gol gappay, biryani, tikka, and it tasted similar to how it does in Pakistan,” she said. “I feared they might treat us differently because we were from the ‘rival’ nation or they might not like us, but that didn’t happen at all.”

The most powerful moment for several visitors was stepping across the border at Wagah.

Zoya Paracha who had been warned by family “don’t tell them you’re Pakistani” said: “One strip of white painted line divided the two nations. Walking past the white line, I was in India. The air felt the same, the people looked the same, the landscape was identical and so much so the Punjabi accent was exactly the same.”

For M. Usman Mirza, the trip was a revelation. “All this made me realise that the differences that I had in my mind, all the preconceived notions were a product of what our governments (past included) and media wants us to believe. We are brought up celebrating wars in which Indians got killed, whereas we should be mourning the loss of life as a whole.”

Syeda Fatima Sikandar, a 13-year-old from Lahore, found the transport system to be better in India. "The bus system in place was great, that's the one thing I found different."

Apart from undertaking a sightseeing tour that included Taj Mahal, Amer fort, temples and other monuments, the delegation went to schools and interacted with students their age.

"Most schools in India, private or not, had a high education standard. Students there were involved in a lot of practical work and activities," said Fatima.

Mazhar Ali, 16, echoed her views. "Theatre, drama and extracurricular were a norm in the schools there and it reflected in their confidence levels. I definitely got a boost just interacting with them."

As part of the same programme, The Citizens Archive also reached out to schools in both India and Pakistan for an exchange of letters and postcards between students through which they shared stories about local festivals, natural heroes, culture and were also encouraged to ask questions about each other's country.

After 18 months of this exercise, some of the best letters were put on display in an exhibition at Frere Hall in Karachi.

The initiative brought out feelings of homogeneity between children and dispelled negativity surrounding the two nations. Fatima from Lahore Grammar School summarised what she felt after her trip: "I think whatever bitterness there may be, it's only on a political level. The way we see the world, the idea of entertainment, and wanting better relations, is mutual in both the countries." 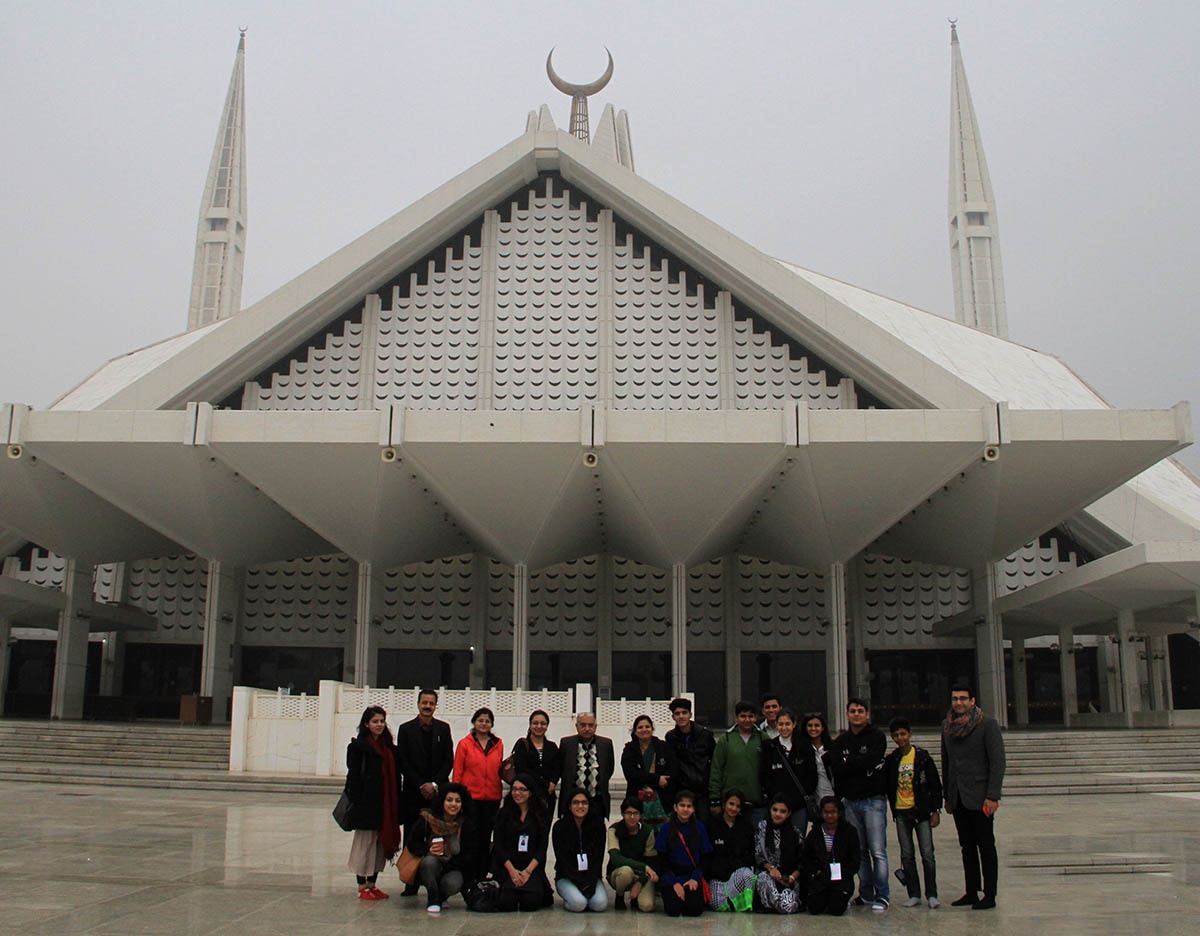 Members of the 2013 2015 Indian delegation at the Faisal Mosque in Islamabad. The Citizens Archive of Pakistan. 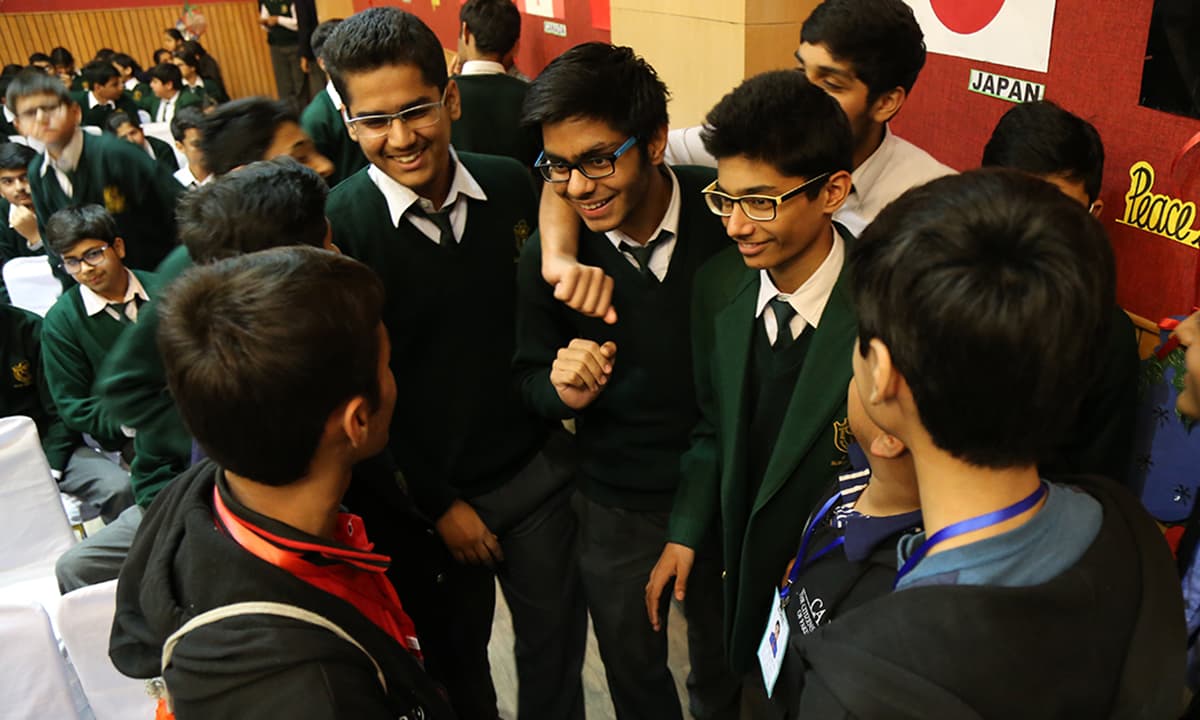 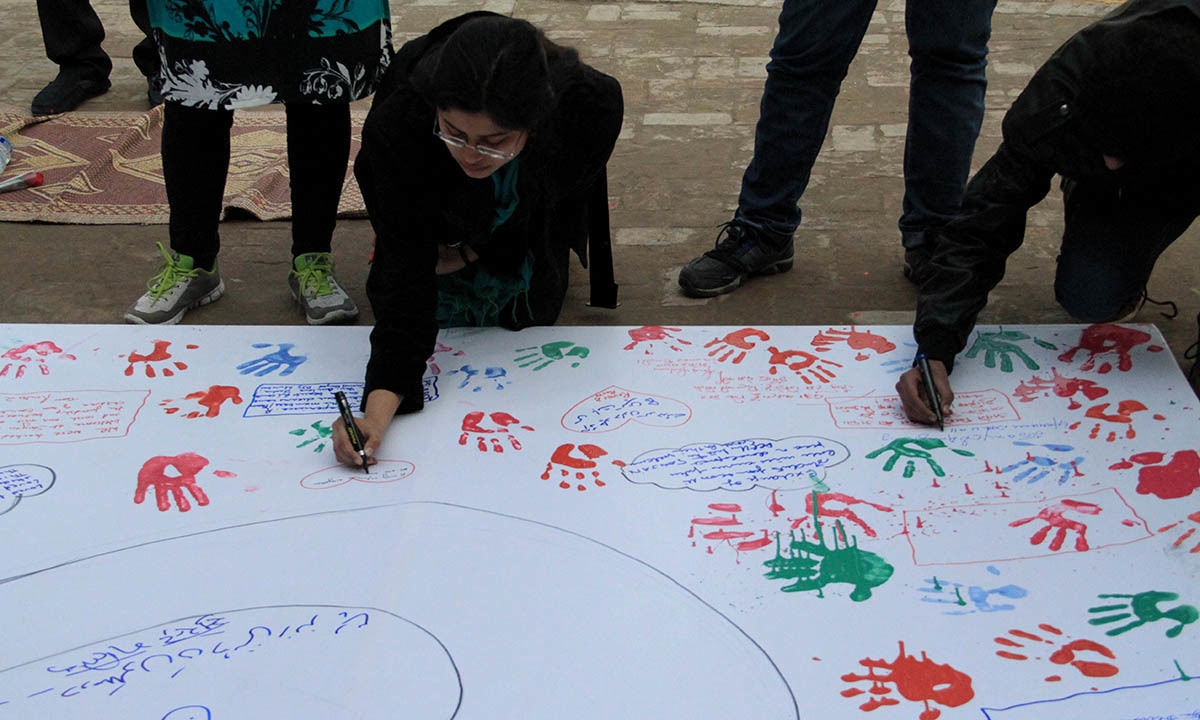 A member of the EFC Indian delegation writes a message of peace while on a visit to the Sanjan Nagar Public Education Trust in Lahore. The Citizens Archive of Pakistan. 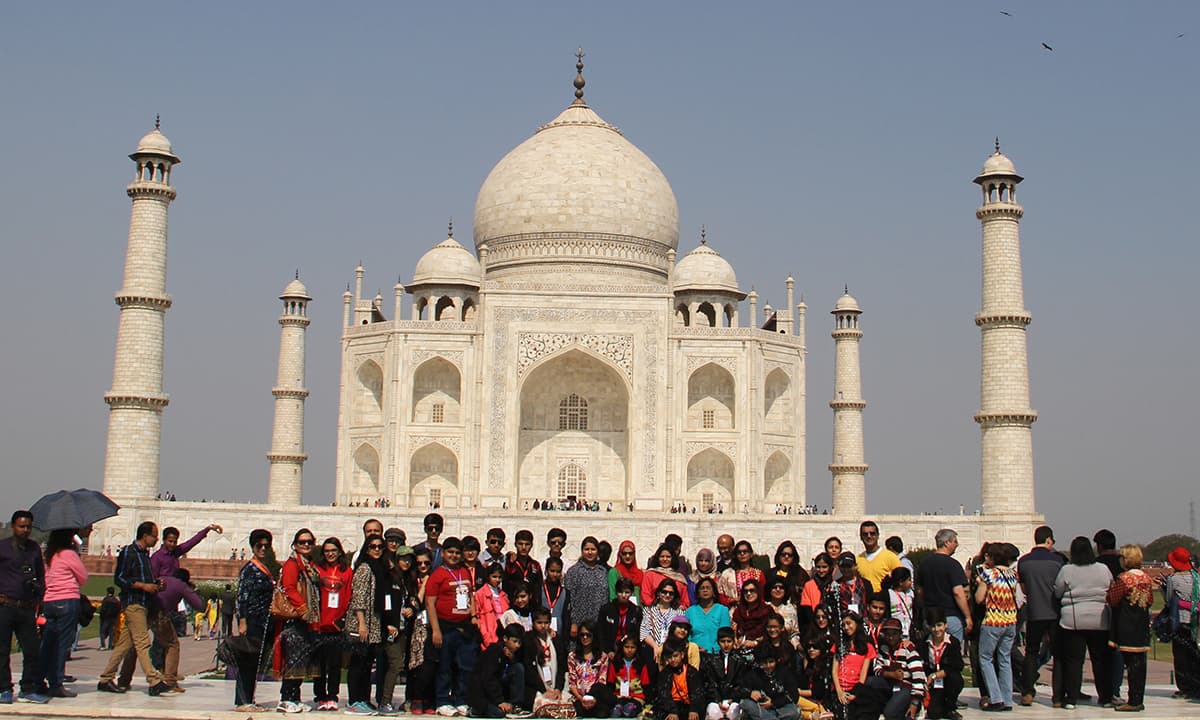 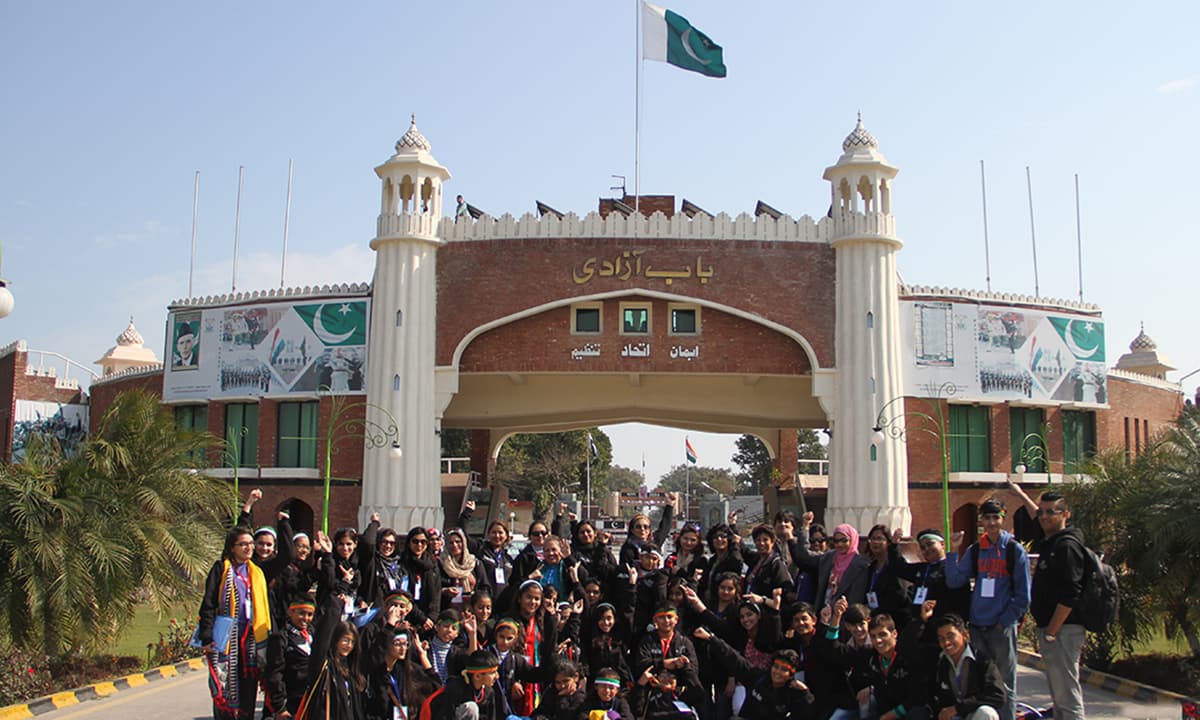 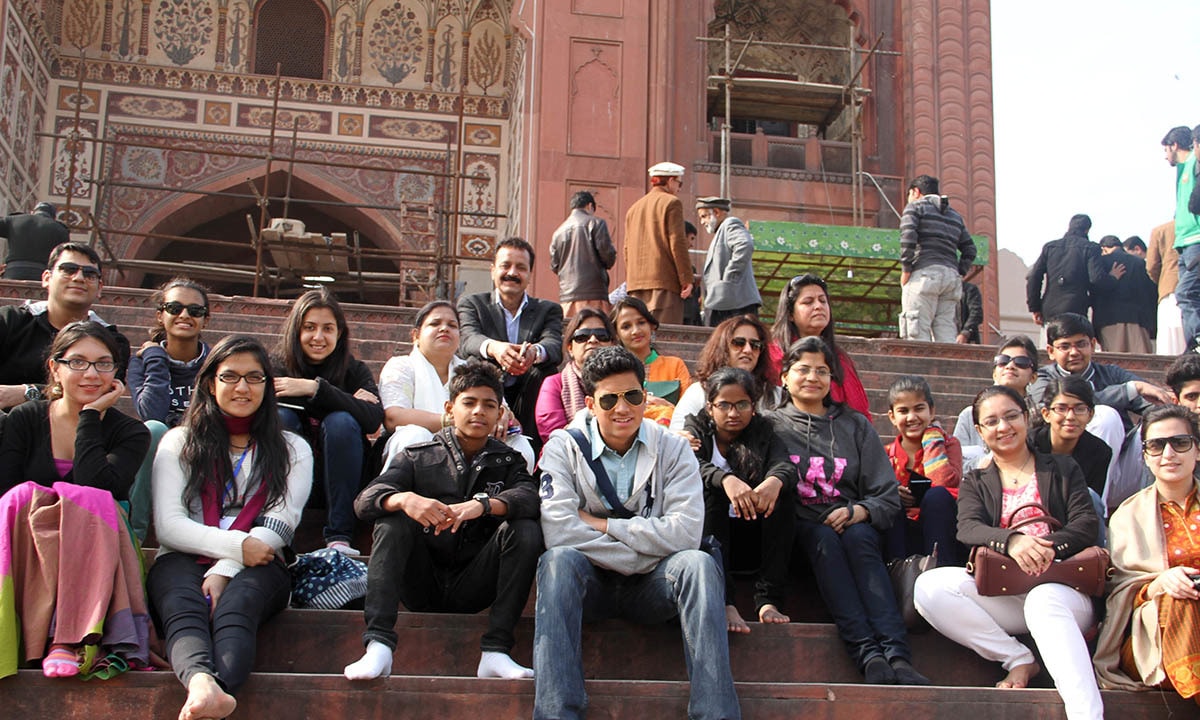 Members of the EFC Indian Delegation outside the Badshahi Mosque in Lahore. The Citizens Archive of Pakistan. 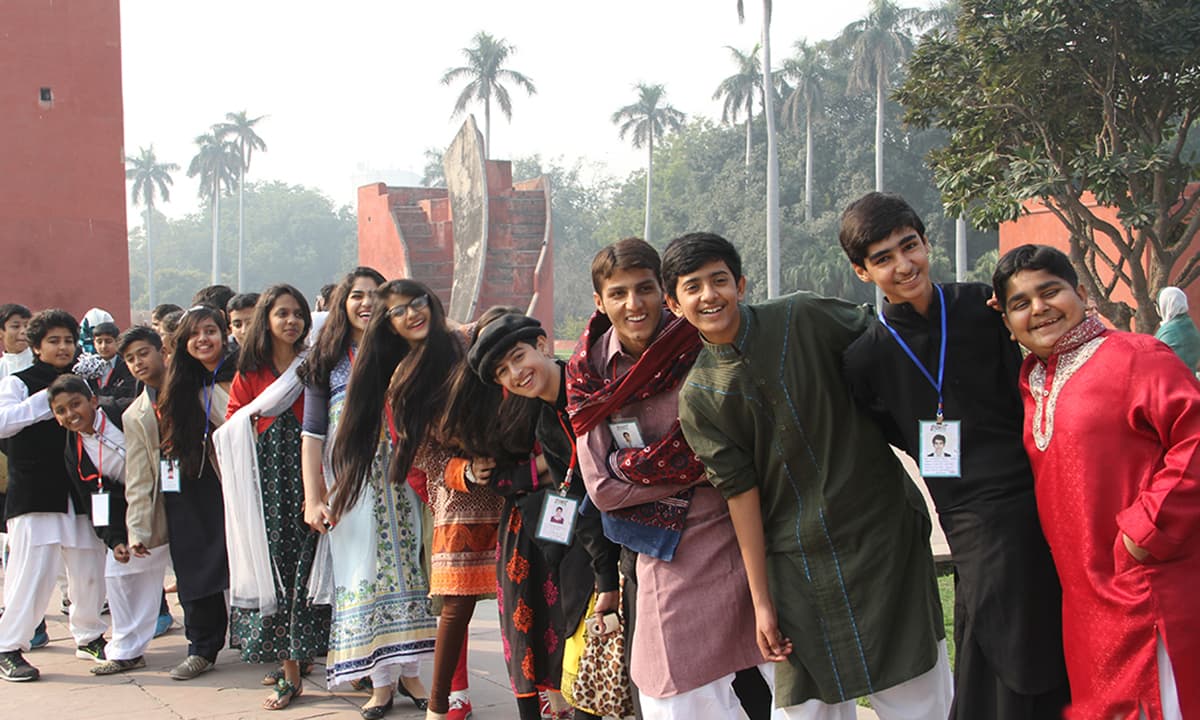