Contribute Now
Ad
With all the immediate distress and hopeful fervour that has greeted Narendra Modi’s administration, one of the government’s unyielding themes is the prime minister’s allegiance to running water. Specifically, the swift currents that pour from the steep flanks of the Himalaya range as a cure for the country’s endemic electricity shortages.

In the three months after his election last May, the 64-year-old leader personally dedicated three new hydropower plants and a 375-kilometre transmission line in Jammu and Kashmir.

In August, Modi became first Indian prime minister to visit Nepal since 1997. While in Kathmandu he negotiated an agreement to finance the construction of two transmission lines and to set up a project office for the 5,600-megawatt Pancheshwar hydropower station on the Mahakali River. The immense electricity-generating installation, close to two decades in planning and development, is more than twice the size of India’s largest operating hydropower project, the Tehri hydropower station in Uttarakhand. “Nepal can free India of its darkness with its electricity,” Modi said.

Modi’s run-of-the-river diplomacy culminated in February when an advisory committee overruled a previous government decision and approved construction of the 3,000-megawatt Dibang power project in the wild and steep Himalayan highlands in Arunachal Pradesh. Not since 2003, when Prime Minister Atal Bihari Vajpayee directed India to generate 50,000 megawatts of power by constructing 162 big new hydropower stations – most of them planned for the Himalayas – has an Indian leader exhibited such fealty to the kinetic energy from damming fast-moving mountain streams.

Yet just as the hopeful current of Vajpayee’s ambitious programme for diversifying India’s electrical power was slowed by rampaging floods and landslides, rising costs, and powerful civic opposition in the Himalayan states, Modi’s dam building campaign is not at all assured.

Last July, in a powerful signal of the sector’s troubles, Jaiprakash Power Ventures, one of India’s largest private dam developers, sold to Reliance Power Limited its three big hydropower projects, capable of generating 1,800 megawatts, for $2.4 billion. That amounts to half what it would cost to build the projects new, according to construction estimates. One of the power stations, the Vishnuprayag dam in Uttrakhand, was heavily damaged in June 2013 by a flood on the Alaknanda River.

Arguably the strongest evidence of India’s hydropower retreat lies south of this Himalayan highland state capital, amid the rusted skycranes and mildew-stained concrete of the unfinished 2,000-megawatt Lower Subansiri hydropower project. A pedestal of formed concrete that rises from the bottom of a narrow gorge of the Subansiri River, the silent construction site has become an expensive stage for a national drama over Himalayan hydropower development. It pits public demands for lower financial and safety risks, public involvement, and more reasonable scale – all 21st century values – against 20th century government ideas about the efficiency and economy of building mega hydropower projects in the world’s tallest and most treacherous mountains. 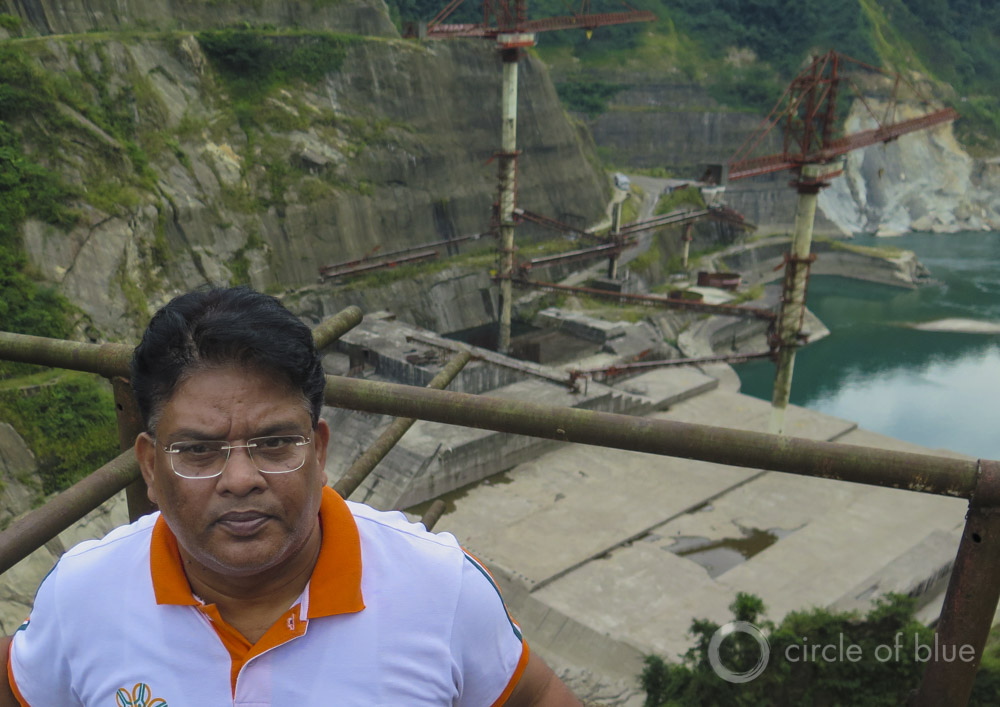 An administrator at the tomb-quiet Lower Subansiri dam site. Costs for security and an administrative team have reached $8 million a month. Finishing the project will cost $2 billion or more if construction restarts. Credit: Keith Schneider/Circle of Blue

“There are close to 200 big hydropower projects planned for the Himalayas in North East India. Most of them are yet to be approved,” said Himanshu Thakkar, the founder and coordinator of the South Asia Network on Dams, Rivers and People, a Delhi-based advocacy organisation. “Almost all have generated significant protest from people in the region, and from local government leaders. The big projects are difficult to build, and dangerous to manage in mountains that are on highly silt laden rivers, in a region rich in biodiversity and prone to earthquakes and flooding. The lives and livelihoods of so many millions are dependent on these resources. Most of the dams will never be built.”

When construction started in 2005, the $1.6 billion Lower Subansiri project was viewed in Delhi as a paramount example of Indian engineering and a jewel of India’s hydropower campaign. At 2,000 megawatts, the Lower Subansiri project would be India’s largest when it started generating power by 2010 just a few kilometres from where the river emptied into the mighty Brahmaputra River.

The dam would also be the first of three dams on the Subansiri that included a 1,600-megawatt project in the river’s middle reach, and another 2,000-megawatt power dam near the headwaters. The Subansiri dams were viewed as showcase installations for gaining access to the 63,000 megawatts of hydropower capacity – 43% of the country’s total – that government studies said were ready to be tapped in Arunachal Pradesh and seven neighboring states in North Eastern India.

But farmers of the Subansiri River valley were not at all impressed. They objected to being displaced by the 47-kilometre-long lake formed by the dam. Residents downriver along the banks of the Brahmaputra, which starts in China, tumbles through 7,000-metre deep valleys of the Himalayas, and transports more fresh water than any river but the Amazon and the Congo, were alarmed by what they viewed as an authentic threat of a big dam in their midst.

In 2004, 2008, and 2011, for instance, flood waters overwhelmed managers of the 405-megawatt Ranganadi hydropower dam, the largest in Arunachal Pradesh, and inundated the plains of Assam, the neighbouring province on the Brahmaputra’s southern banks. The Mising Students Union and the Krishak Mukti Sangram Samiti, two among several citizens groups, organised protests in neighbouring Assam, and established blockades on the roads leading to the Subansiri dam construction site.

The National Hydropower Power Corporation, the government-owned developer, fired back with public statements that insisted the dam was safe. Hydropower authorities in Delhi insisted that the dam would be built.

But state authorities, aware of shifting public sentiment and supported by a number of independent assessments, raised questions. The momentum for building Lower Subansiri steadily dissipated. In December 2011, construction shut. Every summer since the shutdown, NHPC and Delhi hydropower administrators announce a new start date that slips by.

“The government put these plans together for large dams on its own,” said Partha J Das, a researcher for Aaranyak, an environmental policy group based in Guwahati, and co-author of Damming Northeast India, a comprehensive 2010 study of hydropower development in the region. “They didn’t consult with people who live here. It’s a mistake that led to distrust. In 2001, the government projected 168 hydropower projects in the Brahmaputra Basin and over 63,000 megawatts of capacity. People aren’t going to let that happen here.”

The experience on the Subansiri River turned out to be the prelude for a new era of India’s hydropower development – the era of cancelled, shutdown, delayed, and destroyed hydropower dams. India’s hydropower generating capacity from dams larger than 25 megawatts has slowed to the lowest annual growth in half a century, according to figures from the Central Electric Authority. 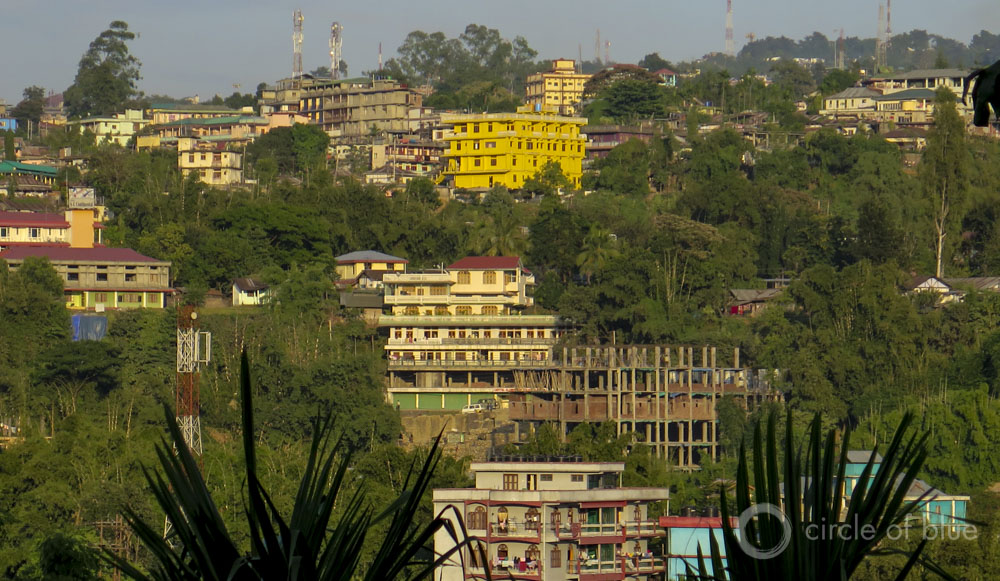 Itanagar has been the scene of big citizen protests over large dam construction. Credit: Keith Schneider/Circle of Blue

Prime Minister Modi’s advocacy, in short, could very well turn out to be a politically polarising gambit. For the time being it amounts to a measure of his political standing, a personal campaign to restart a programme of big hydropower project construction that is nearly at a standstill.

“There are many reasons for what’s happening,” said Maharaj Pandit, a professor of environmental studies at Delhi University and an authority on Himalayan dams. “People who live in the regions where big dams are proposed fight like tigers to keep them out. It’s dangerous to build them in the mountains. The costs for these big dams are so high it doesn’t make economic sense. The time has passed for big dams in the Himalayas.”

An end to big dams?

Whether that’s the case is very much a matter of dispute in Delhi, and in most of India’s Himalayan state development agencies, where support for big dam projects is strong.

In late March, builders of big dams met in Dehradun, the capital of Uttarakhand, to consider the country’s dam building prospects. Monstrous floods in June 2013 wrecked the state’s hydropower sector and may have killed 30,000 people, by some estimates. 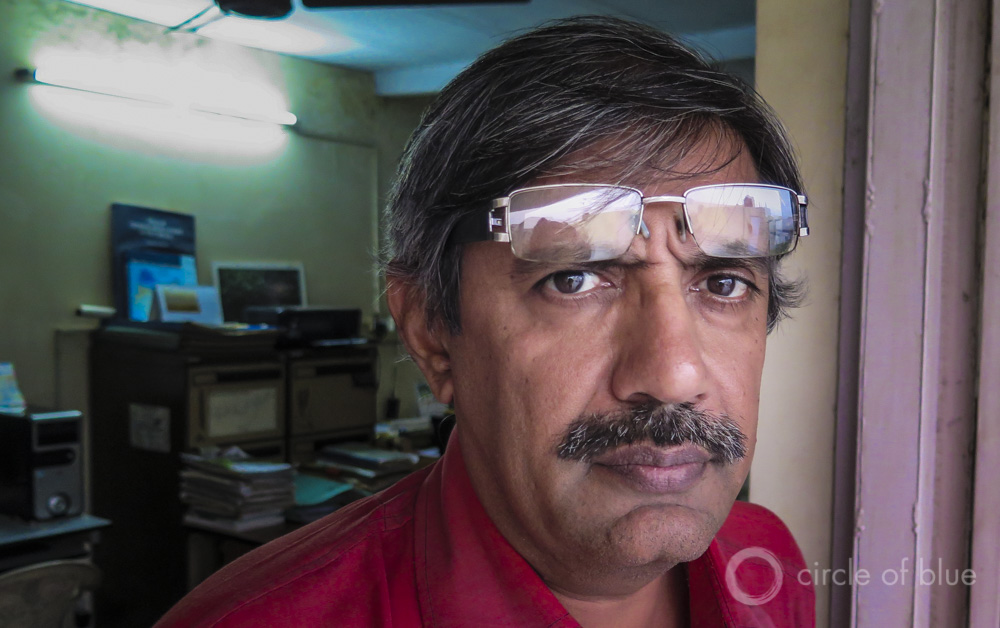 Himanshu Thakkar, founder and director of the South Asia Network on Dams, Rivers and People, a Delhi-based advocacy organisation. Most of the big new dams proposed for India’s Himalayan states won’t be built, he predicts. Credit: Keith Schneider/Circle of Blue

A study of the flood ordered by India’s Supreme Court concluded last year that dams in the Alaknanda, Mandakini, and Bhagirathi River basins amplified the damage and recommended that 23 proposed dams not be built in flooded watersheds because of the hazards to fisheries and communities. The Modi government indicated in December that it would abide by the recommendation. But the national government also is pushing the Supreme Court and dam developers to proceed with construction of other dam proposals outside the river valleys that flooded in 2013.

Uttarakhand Chief Minister Harish Rawat sent a message to the Dehradun conference attendees that made the same case, promoting rebuilding damaged dams and discounting Himalayan hazards: “The heavy rain and cloud burst triggered flash floods and landslides, which led to the disaster,” wrote Rawat. “Natural calamities happen since time immemorial. But people have associated this calamity immensely to the development of hydropower projects. Attributing hydropower development for such loss are more or less a result of lack of awareness and understanding of natural and manmade phenomena and some based on belief and not on scientific reasoning.”

Such views guide the NHPC’s administrative staff, who along with a sizable state security force, are assigned to oversee the ghost-like Lower Subansiri site. Iron equipment to transport sand and rocks, or manufacture concrete, is heavily rusted and would likely need to be replaced if construction restarts. Motionless trucks and front-end loaders, similarly disfigured by rust, flank the narrow road leading to the dam.

The NHPC personnel say the dam is 50% complete. They report this as a matter of fact, but are fully aware that it will take their company at least a year, perhaps two, to update the necessary studies, review engineering details, assess current conditions, and assemble all of the pieces needed to get started again.

Their determination, a mix of hopeful strength and psychic resignation, is reflected best on the face of the statue that greets visitors to the Lower Subansiri dam construction site. Draped in mildew stains, the heroic figure raises a thunderbolt high above his head and gazes intently skyward toward an energy future that may never come to pass.

This article was originally published on circleofblue.com.

In pictures: Chennai struggles as heavy rains pour down for fifth day