Contribute Now
Ad
Net neutrality, in simple words, refers to a open and free internet that doesn’t discriminate between the type of content or data you receive, and which outlet it has come from.

Here are the three principles of a free and fair internet.

While the debate on ths issue continues, here are 3 principles of #NetNeutrality #India shared by @NeGPIndia pic.twitter.com/C7vNTWzWMX

The AIB comedy team, evidently unscathed by the scorching reception to their controversial roast in December, explain why net neutrality has become such a buzzword in India over the past few weeks.

This video by the popular TV show host John Oliver on the issues pertaining to net neutrality in the US has great relevance to India too.

The Telecom Regulatory Authority of India could change the way internet works in India. It recently put out a paper inviting suggestions on 20 questions around which it will formulate new guidelines for the internet which might divide it into fast and slow lanes. If you are unsure about what this “fast and slow lane” analogy means, consider the following graphic:

Made a graphic on Airtel's anti-#NetNeutrality tactics. Soliciting views in this doc: https://t.co/1Ybnb1FtTi Pls. RT pic.twitter.com/Xx5fw9e400

The following video serves as a useful primer about the context of net neutrality, specific to Indian subscribers and internet providers.

One of the major concerns of the debate is differential pricing of services which violates the principles of open internet. Often, it comes disguised as freebies which end up promoting one service while undermining the others. If the telecom operators are allowed to differentiate between data depending on the usage of the content, the future of the internet might look a bit like this: 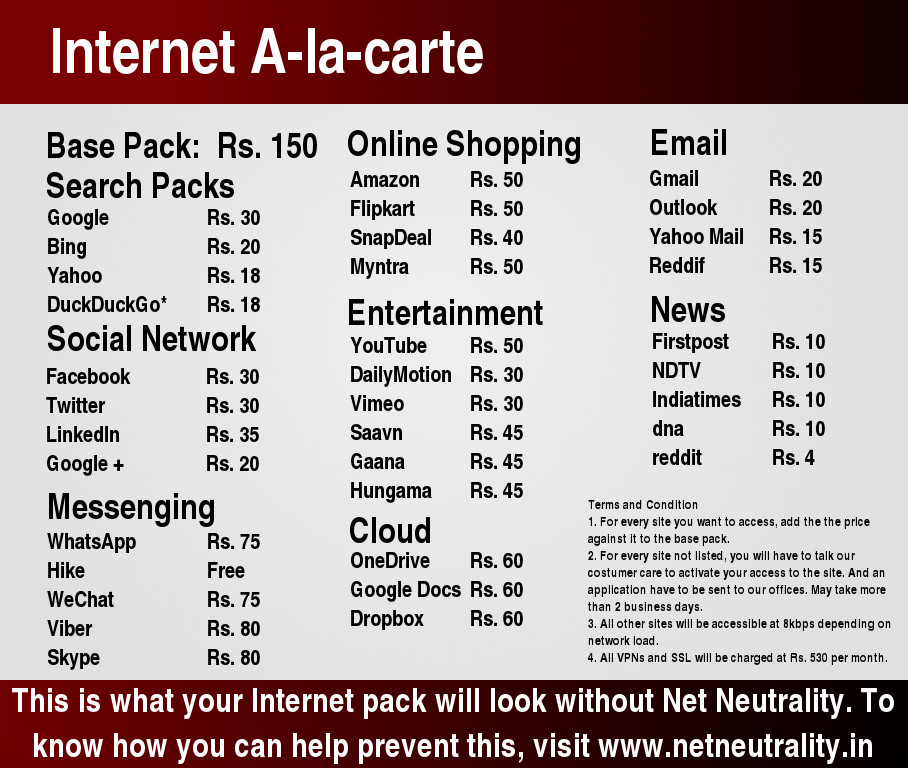 YourStory, a website that features Indian startups also made a video which explains why an open internet is so necessary in a fun manner.

And if you still haven't read it, here's our simplified Frequently Asked Questions : Everything you need to know about net neutrality – why we need to keep the web free