Contribute Now
Ad
“Woh samvidhan kitne ka?” said the man. How much is that Constitution? “Rs 250,” answered the person manning the stall. This is not an exchange you hear everyday.

“Why do you want to buy the Indian Constitution?” I asked.

“Arre! Why not!” the man said in irritation, but then smiling right after to show that he was only joking. “We all keep our dharm granths in our house, don’t we? Hindus keep the Gita. This is India’s dharm granth. Every Indian must keep this book written by Babasaheb in their house!”

The transaction took place just outside the Ambedkar memorial in Mumbai on his birth anniversary on Tuesday. To pay their respects to the Dalit leader, thousands of people had gathered at the Dadar shore, where Ambedkar had been cremated, after his death on December 6, 1956. I was coming here for the first time.

Stalls outside the memorial sold the Indian Constitution as well as busts and portraits of Ambedkar, dressed in a navy blue jacket, the same colour as that of the flag of the Dalit movement. There were also other Dalit icons, Jyotirao Phule and Sant Ravidas along with a great many statues of the Buddha. And more books: a Pali-Hindi dictionary and Shivaji Kon Hota, whose author Govind Pansare was recently shot and killed by unidentified assailants. Pansare's book, which sought to portray Shivaji as as secular figure, had angered some Hindutva supporters. 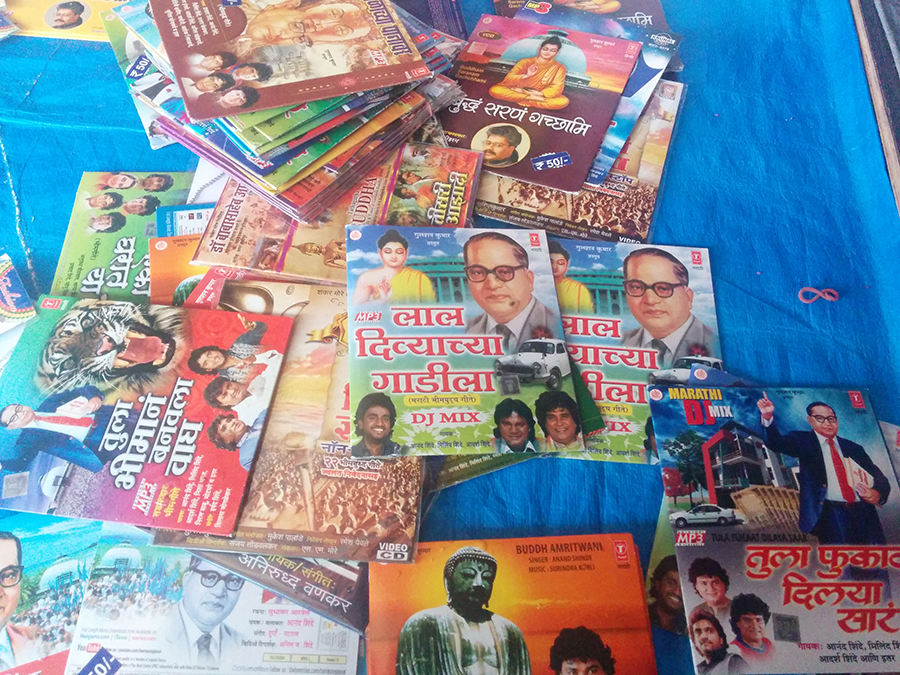 On the street outside, there was a line of vendors selling food: samosas and raw mango chaat. A tattoo artist was inking squealing customers with a battery-powered machine. One of the designs was of Ambedkar but there were also dragons, stars and a number of others to cater to a wide range of tastes.

There was a downside to all this festivity, though: the queue. The line to get into Ambedkar’s memorial was more than a kilometre long. It snaked out of the memorial, along Dadar Chowpwatty, out onto the street, took a right turn at the intersection, past the Natural’s ice cream store and stopped outside the the Tamnak Thai restaurant. India might soon be building the tallest statue in the solar system for Vallabhbhai Patel, more schemes than we can count named after Jawaharlal Nehru and Gandhi, but in 2015, only one Independence-era Indian leader can attract such enormous crowds.

As I got into line, a smart young man wearing the classic combo, white shirt and blue jeans, dismissed my grumbling. “Oh this is nothing, you should come here on December 6, Babasaheb’s punya tithi, death anniversary," said the young man, Akhilesh, a note of pride in his voice. "The line is three times as long then!”

Akhilesh said he lived in Santa Cruz and was on the ground staff of Indigo airlines. He asked if there were many Buddhists in Kolkata, where I'm from. I was’t too sure.

“Lots in Mumbai!” he said pointing to the line out in front, which was true: it’d be another hour before I’d actually get into the memorial. 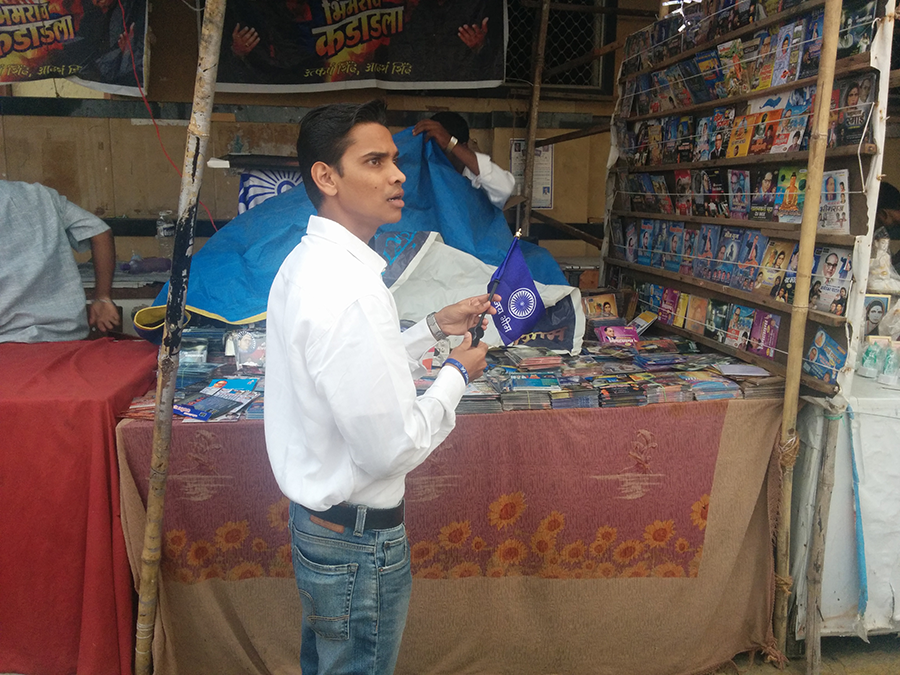 In Maharashtra, the Dalit movement is closely linked with Buddhism, following Ambedkar’s call to convert away from Hinduism in order to escape the oppressions of the caste system. In 1956, Ambedkar converted to Buddhism in a mass ceremony in Nagpur. Along with him, 6 lakh Dalits changed their faith that day, sparking a surge of interest in neo-Buddhism. In 2001, Maharashtra had around 60 lakh neo-Buddhists. But the movement has failed to grab a toehold in other states. There are only around 20 lakh Indian Buddhists outside of Maharashtra.

Half an hour into standing in line, the torpor was broken by a mass of cars, sirens and urgent sarkariness. Vinod Tawde, state minister for education had come for a visit. The Ambedkar Memorial is a pilgrimage spot for Buddhists but also, for its rich symbolism, politicians. Just outside the memorial compound was a stage for political speeches and political banners covered every inch of vertical real estate outside. Ramdas Athawale’s Republican Party of India dominated the proceedings, but larger parties such as the Congress or Uttar Pradesh's Bahujan Samaj Party also got  a few banners in. 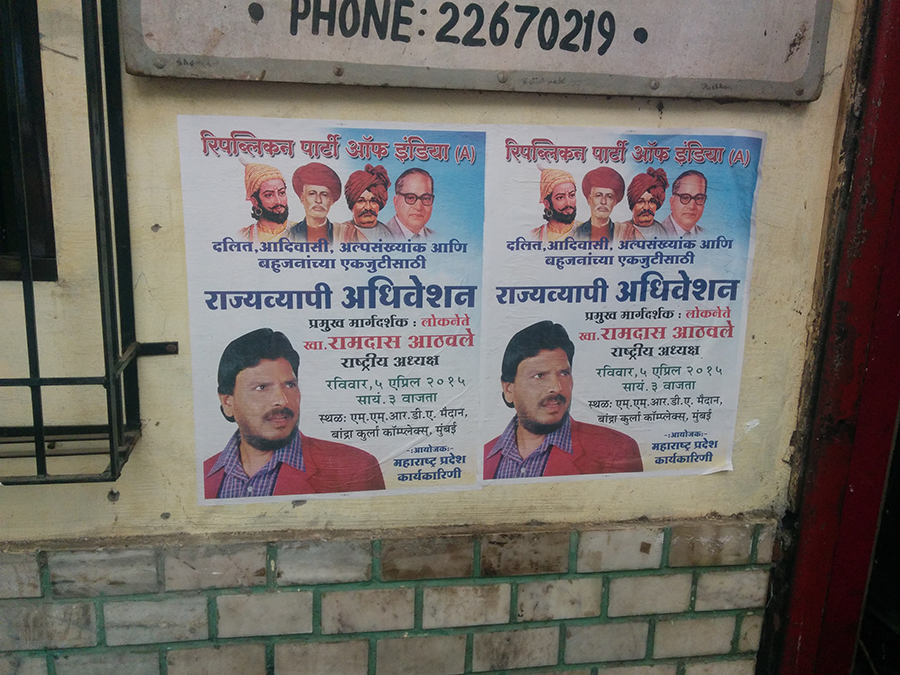 Ambedkar’s memorial is built in the shape of an ancient stupa. The inner chamber of the memorial contains a bust of Ambedkar and behind and above it, a Buddha statue. On either side of the two statues are giant plastic flowers, sunflowers on one side and roses on the other, even as volunteers garlanded the Ambedkar statue with real flowers offered by the people streaming in. A 3-foot high wooden model stupa rested on the side.

Admonished by signs that forbade phones, talking or sitting and hurried along by volunteers in case they lingered too long, scores of people streamed in every minute to pay their respects to Ambedkar and to the Buddha. As they made their way through, they also touched the feet of the two Buddhist monks sitting on platforms on the side of the walkway.

One of the priests was Ashok Kriti who said that he was known as Sunil before he took diksha. He ignored most of my questions though and I didn’t blame him: he was so busy blessing people. After a while, assuming quite logically that I wanted more information on Buddhism, he took pity on me and said,”Come tomorrow to Ambedkar Bhavan next to Chitra Talkies. You’ll get all the information you need. We have 43 monks associated with this vihaar and one of them will help you out”.

On the way out from Chaitya Bhoomi, an SUV drove by me by, a blue Buddhist flag proudly being waved out from a window. Later on, as I walked to the station, I passed a building with the name “Brahman Sahayyak Sangh” (Brahman Assistance Association). There was no one there, but Google told me it was a marriage hall.