Contribute Now
Ad
In February 1998, Budhan Sabar, a member of a denotified tribal community in West Bengal was taken into custody for an alleged theft. A few days later, he died. The police in Purulia claimed that Budhan had committed suicide with his gamchha, an article of clothing he had not actually had with him when arrested. A fact-finding group found that he had been beaten to death, a conclusion later upheld by the Calcutta High Court.

Almost 20 years later, the story of Budhan’s life and tragic death have been memorialised in a play titled Budhan Bolta Hai, which is being performed across the country, in formal theatres and in more rudimentary settings.

The moving force behind the play is Budhan Theatre, established in 1998 by Ahmedabad's Chhara community, one of several denotified tribes in India. Since it was founded, the group has performed 45 plays across the country.

Denotified tribes refer to groups of people who during British rule were in 1871 formally classified as criminal tribes. All members of these communities, who were often nomadic, were considered inherently prone to crime from birth and were segregated. Unlike other non-stigmatised tribes that were after Independence listed under the category of Scheduled Tribes, it took until 1954 for these tribes to be delisted as criminal. Even today, they are subjected to constant discrimination by the state and society.

Members of denotified tribes are among the most excluded citizens of India. While Dalits were so marginalised that upper caste Hindus would consider themselves polluted if they touched them, members of the denotified tribes were not even allowed near the village, said Budhan Theatre's leader, Dakxin Bajrange. 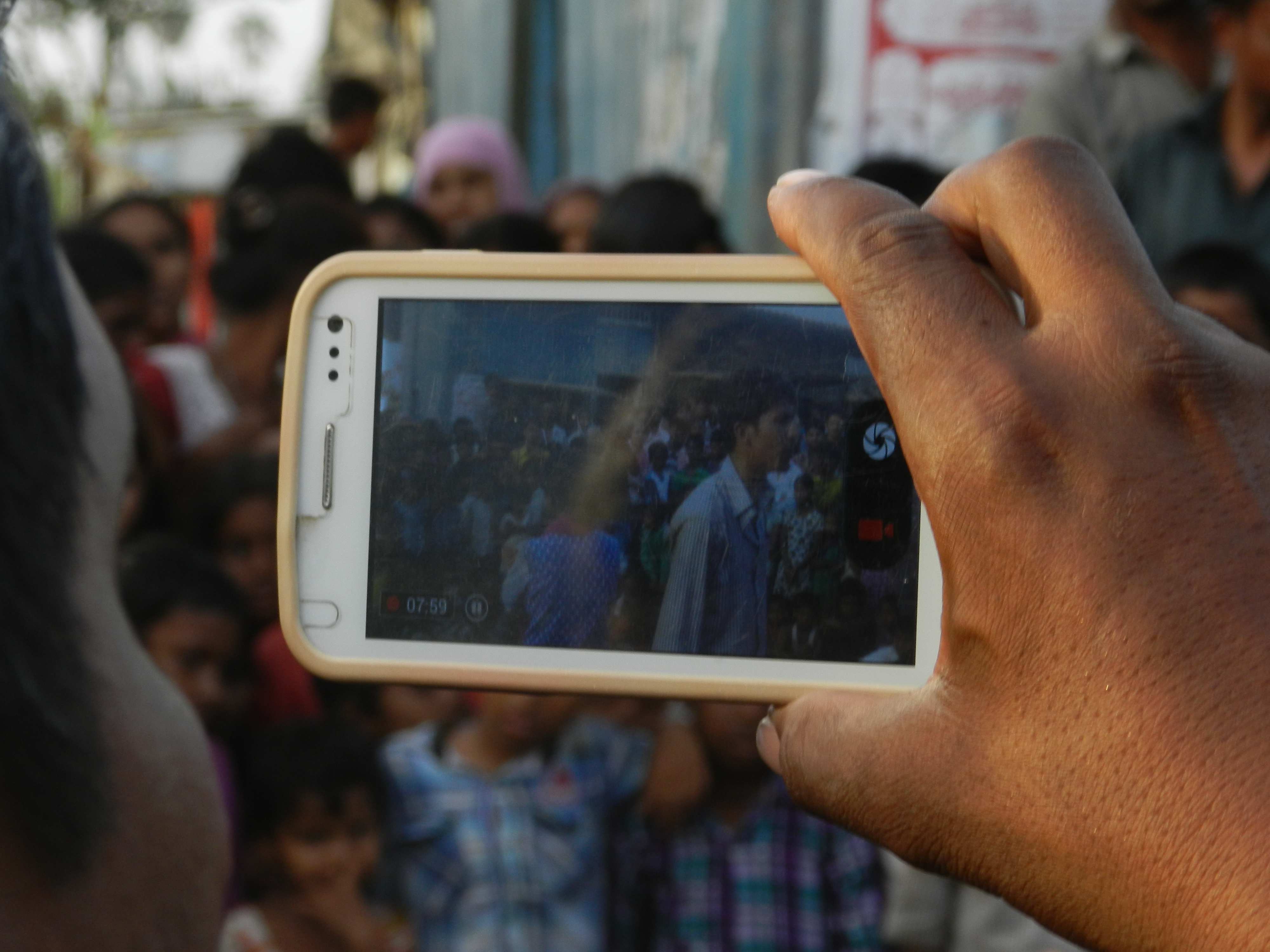 A spectator records parts of Budhan Bolta Hai at a performance in Malad, Mumbai.

Budhan Theatre is attempting to change this pattern of discrimination. “We will always have aggression in us for the injustice we face,” said Bajrange. “But what matters is how you bring it out. Creativity and theatre is one way to make a dialogue out of your oppression and start a conversation.”

The theatre group takes its plays all over the country. Most recently, Bajrange and a group of 11 actors were in Mumbai in the middle of April to performed parts of Budhan Bolta Hai and other stories for members of denotified tribes in the city.

The plays are fluid and responsive to new developments. As they read headlines during their play, even the murder of 20 tribals picked up by the police for allegedly smuggling red sanders wood in Andhra Pradesh got a mention. This is because Budhan Theatre does not use conventional theatre grammar. “We are not acting in our plays, we are performing our own lives,” said Atish Indrekar, who plays the title character of Budhan. “Acting is about lies, but our theatre makes truth because this is what we see every day where we live. Atrocities have been happening for thousands of years, but instead of letting it go, we are doing something.”

The company does not need conventional theatre spaces either. Their production of Dario Fo’s Accidental Death of an Anarchist sets the play in India in the context of encounter killings. They took it to museums, police lockups, building terraces, universities and even to buses and trains. 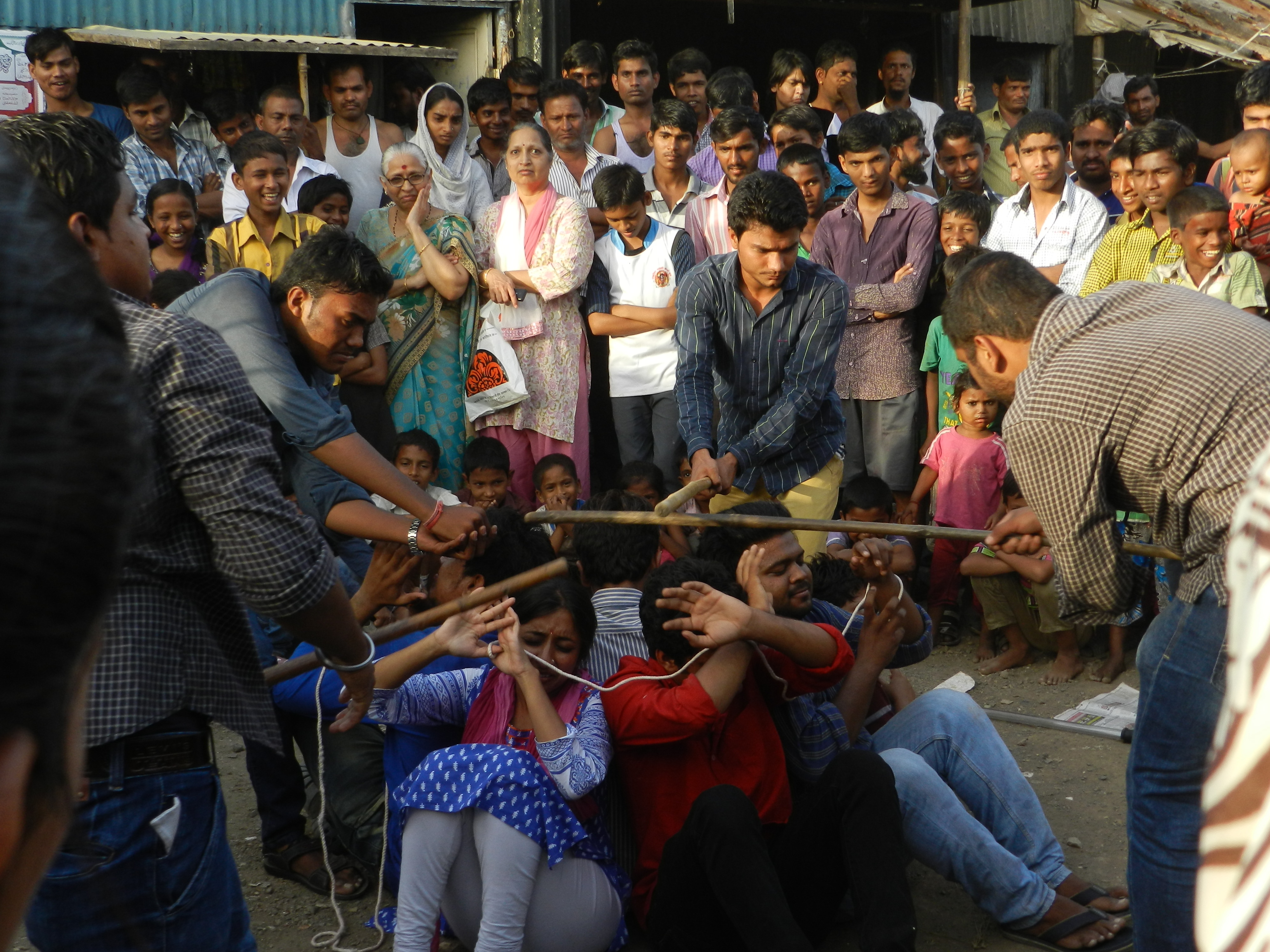 Formal theatre came to Ahmedabad’s Chharanagar in 1979, when Prem Prakash, a leading Sindhi play director, decided to stage the first Gujarati version of Badal Sircar’s Spartacus. He felt that lighter-skinned Sindhi actors would not be convincing in the role of slaves and decided to scout for talent in nearby Chharanagar. A decade later, community activism theatre was established in Chharanagar when linguist Ganesh Devy and activist-writer Mahasweta Devi were so moved by Budhan’s death, they decided to work with members of denotified tribes across India to help them press for their basic human rights.

Among their first halts was Chharanagar. That was where they met Bajrange, with whom they set up a community library and then Budhan Theatre.

There are now three generations of actors at the company. One set is Bajrange’s age, the people who started the theatre unit. Many members of the second group have now moved on to other careers, including full-time mainstream acting.

Atish Indrekar is a member of the third generation and is the a son of a former member of the company. He first saw a Budhan Theatre play when he was in the 5th standard when he tagged along with his father for a rehearsal.

“The first time I went, I saw how a woman was screaming at the police and I recognised this as real,” he said. “There were atrocities happening around where I stayed. I went back and told my father I wanted to be a part of this.”

Indrekar joined the group in 2001 and has since moved from role to role, including that of Budhan. In this time, he has seen Chharanagar transform. When Indrekar was young, residents of Chharanagar could not even get seats in Ahmedabad colleges. Now, those same institutions invite them for theatre workshops.

“We are making sure that the next generation should develop so much that they can proudly say ‘I am a Chhara’ without any fear,” he said. “A lot has changed but there is a lot more to do.”

However, the group cannot wish away its history. It is true that some members of denotified tribes did indulge in criminal activities. “My father was a thief,” Bajrange said. “And what is wrong with that? Thieving is an art, like acting, and he was the smartest thief.”

But, he notes, just because some members of a community are thieves, it does not mean that everyone in the group follows suit – and that too from birth. The British, for instance, decided to reform so-called criminal tribes by walling them off in settlements. Members had to procure a pass to leave the settlement and report to the local police station three times every day, sometimes even in the middle of the night.

When settlements were shut after tribes were denotified, the government of independent India did little to help members of these groups find suitable opportunities to improve their lives. Instead, many of the conversations about denotified tribes were about whether they deserved the right to vote at all. One unlikely participant in that conversation was Bhimrao Ambedkar, who expressed ambivalence at whether they ought to be included as voting citizens in 1928. He did, however, change his mind about this by the end of his life.

Despite being economically backward, many of these tribes are counted as Other Backward Classes and not as Scheduled Tribes.

“In Gujarat at least, there is no way our children can compete with Nayaks, Modis, Ghanchis in education,” Bajrange said. “They are the most marginalised of society. They have no power, no facilities, no economic status. They were not even allowed to work as labourers because they were considered to be criminals.”

What they really want, Bajrange emphasised, is a few basic rights. “The government says it will increase the number of scholarships, that we will be included in a new schedule, but I consider all this to be charity,” he said. “Our rights have been deliberately taken away and we want that, not charity.”

He added: “Don’t give us land. Just give us a guarantee of education and employment, that is all. The rest we will manage. We are strong, we fought the British right from the beginning. We will keep on fighting for this.”