Contribute Now
Ad
What must Yakub Memon have felt on hearing that the Supreme Court had rejected his review petition against his conviction and death sentence in the 1993 serial Mumbai bomb blasts case. The mocking words of his brother, Ibrahim ‘Tiger’ Memon, advising him not to give himself up to the Indian authorities might have echoed in his ears. “You are returning as a Gandhiwadi, but the Indian government will see you only as a terrorist,” Tiger had told him, according to what Yakub told the special court in Mumbai set up under the Terrorist and Disruptive Activities Act.

On April 16, the Supreme Court rejected Yakub’s review petition against his conviction and sentence. The same court had earlier rejected his appeal against his conviction by a special court in Mumbai in 2006, and the president had rejected his mercy petition in May 2014. On the charges for which Yakub has been convicted, none of his co-accused has been given the death penalty.

Tiger Memon's words proved prophetic. Yakub gave up life in a gilded cage in Karachi under the ISI’s watch, to come back in July 1994 and clear his name in the case of the 1993 blasts, which had been masterminded by his brother and Dawood Ibrahim. He was followed by seven members of his family. Only Tiger, another brother Ayub, and their families stayed back.

With him, Yakub brought proof of Pakistan's involvement in the blasts, which India could not have otherwise obtained. He thought this act would earn him a reprieve. Instead, unable to get Dawood Ibrahim or Tiger Memon, the Indian authorities wrecked vengeance on the rest of the Memon family, who had chosen to surrender because of “faith in our government and judiciary”, as Yakub wrote in a letter to the chief justice of India from Arthur Road jail five years after he had set foot on Indian soil. (A copy of the letter appears at the end).

The government did not even have the grace to acknowledge that the Memons had chosen to surrender. Instead, the then home minister, SB Chavan, said in Parliament amidst much thumping of desks that the authorities had arrested Yakub from New Delhi railway station. “I've never seen it in my life,” wrote Yakub in his letter.

His family’s incarceration and their deteriorating physical and mental health drove Yakub to depression. In his letter, he wrote that he could not remember the events of one full year in jail when he was confined to bed. In the letter, Yakub also described his life before the March 12, 1993, blasts. It was an ordinary life: SSC with 70%, then college in the morning and work during the day, graduation, post-graduation, four years of studying to be a chartered accountant, and then establishing his own CA firm with a Hindu partner. “We were doing very well...I was very busy. The purpose of giving this brief about myself is to bring home just one single point: “WHERE WAS THE TIME TO HATE…” (upper case in the original).

In his letter, Yakub pointed out that nine of his 15-member family were NRIs settled in Dubai, and the rest would often visit them. On the day of the blasts, they were in Dubai, and got to know only later that one among them had masterminded them. After the blasts, the entire family left for Pakistan. “But we did not lost (sic) hopes of coming back to India and wipe out the stigma attached to our name,” wrote Yakub.

But the stigma would not be wiped out. “The prosecution is harping upon `Memon Family’ during their arguments as if there is a section in CrPC (as in Income Tax laws, while dealing with the HUF- the Hindu Undivided Family), wherein a family can be treated as a single unit. … The main reason for implicating us in the case is that we were in relation (to) and association of the prime accused. Now to be in relation to anyone is not a crime… We do not deny our relation and association with Ibrahim Memon …as a relative and nothing more.”

In 2007, having spent almost 13 years in jail, Yakub was sentenced to death by the TADA court. His brothers Essa and Yusuf, both seriously ill, and sister-in-law Rubeena were sentenced to life imprisonment. When his sentence was read out by the TADA court judge, Yakub cried out: “Forgive him lord, for he knows not what he does.'' Seven years later, the Supreme Court upheld the judgement.

But, as both Yakub’s appeal and his review petition, argued by lawyer Jaspal Singh, asserted, Yakub was convicted on the basis of the statement of one approver and the retracted confessions of co-accused. The prosecution did not produce any independent evidence to refute Yakub’s assertion that he knew nothing about the blasts.

With the mercy and review petitions rejected, Yakub is left with little hope: only perhaps a curative petition and another mercy petition. If Yakub is hanged, the message will be clear: if you have committed a crime and have been lucky enough to escape, good for you. If you are suspected of having committed a crime but want to return to India to try and clear your name, be prepared for the worst. Far better to spend your life in luxury, even if it is in a country that is hostile to yours. Not for you the choice of bringing up your children as Indians.

The second message that Yakub's hanging will send is that there is no place for reformation in our justice system. Among the arguments made by advocate Jaspal Singh in his review petition were his client’s record of good conduct in jail and no evidence by the prosecution that there existed no possibility of reformation. During his 21 years in jail, eight of them on death row, Yakub has obtained an MA in English from the Indira Gandhi National Open University. The authorities of the course denied him permission to attend the convocation, although it was held in Nagpur itself, where he has been lodged since 2007. The day the Supreme Court dismissed his review petition in April, Yakub got an MA from IGNOU in political science.

The third message will perhaps be the most ominous – that our criminal justice system recognises guilt by association. Dawood Ibrahim and Tiger Memon are beyond our reach. Should we rejoice that we have at least one Memon we can hang and lock the others up for life? Was Yakub right in writing: “According to the prosecution if one member does any wrong, entire family …can be punished and society can be shown that the justice is being done?”

Finally, Yakub Memon’s hanging will inevitably draw our attention to the original sin in the chain of events that led to the March 12, 1993 blasts: the Mumbai riots that followed the demolition of the Babri Masjid. Neither those who demolished the Masjid nor those found guilty of the ensuing riots, in which 900 persons were killed, among them 575 Muslims and 275 Hindus, were punished, even though criminal offences were registered against the perpetrators. Two judicial commissions also indicted specific individuals for both crimes.

Among these individuals were 31 policemen, charged with extreme communal conduct against Muslims, including murder. None of them was punished. Nearly all the offenders in both events not only went free, some of them ruled the country as central ministers.

But those who took revenge for the riots, killing 257 people, were not let off. Their punishment ranged from two years to death. All death sentences, except Yakub’s, were six years later commuted to life.

When the TADA court held him guilty, Yakub cried out: “Woh sahi bolta tha, koi insaaf nahin milega, tum log hume terrorist banake chodoge.” What he said was right; you won’t get justice; you will make us into terrorists. He was referring to Tiger Memon’s words. In his letter, Yakub wrote: ‘’Section 20(8) and other draconian provision of this Act does not allow the Designated TADA court judge to look upon us with living and merciful eyes. On the contrary we are presumed to be guilty of TERRORISM.” 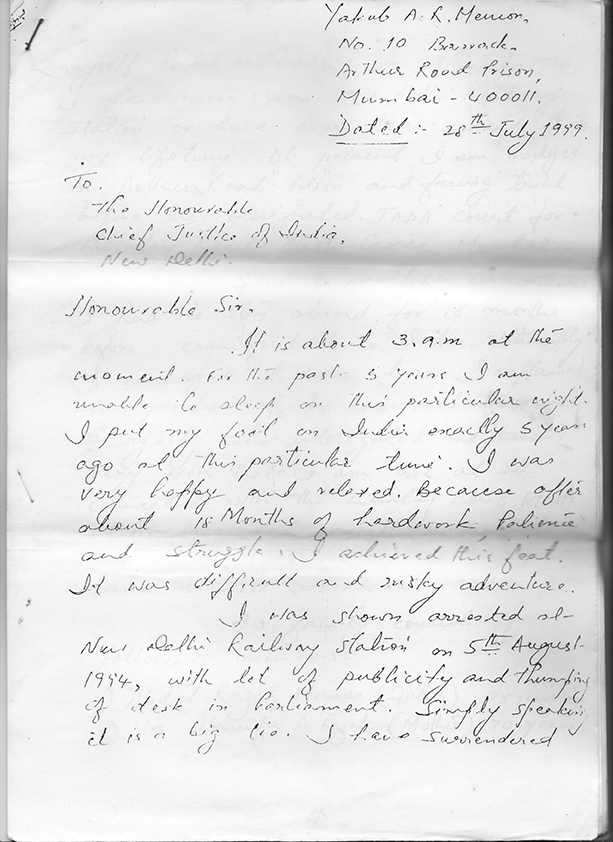 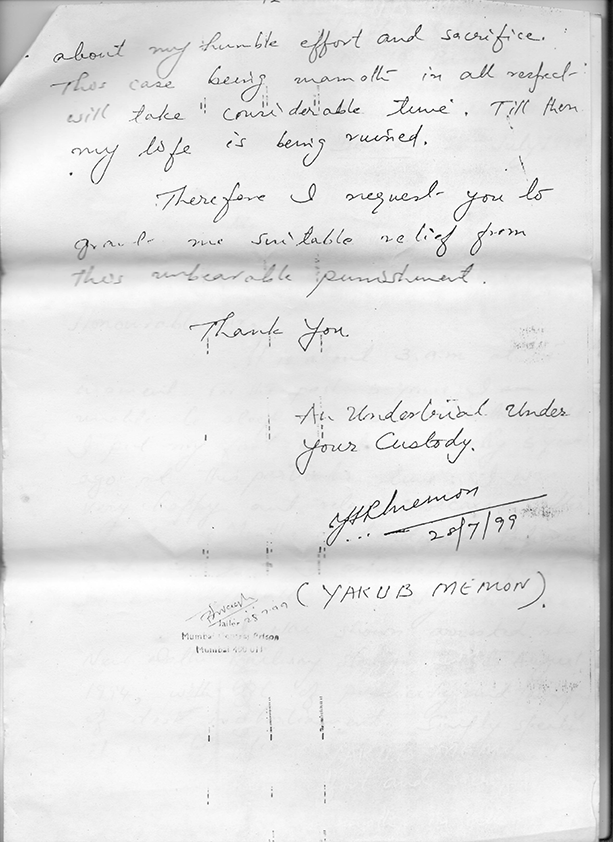 The letter that Yakub Memon wrote to the chief justice of India from Arthur Road Jail, five years after he surrendered to Indian authorities in July 1994.