Become a Member
Ad
Ram Jeevan was thirsty. The afternoon sun was making him breathless and he had been out with the cows for a while. The area around the jail campus in Port Blair in the Andaman Islands was especially good for grazing livestock. The Police Training School was right next door and Jeevan asked the sentry at the gate for some water.

Brijesh Kumar Chaubey was having a boring day. That was the biggest problem he had with the PTS gate duty on Sunday afternoons. But soon his day would turn, as would Jeevan’s life.

Chaubey began to chat with Jeevan, hoping that it would help dissolve the afternoon into evening. “As you know, no one is from these islands except the tribes or the convicts,” said Chaubey, 28, over the phone from Port Blair. “So the first question we ask is, where are you from and when did you get here.”

Before the earth shook

Jeevan said he had come to the Andamans “dharti hilney se pehle” (before the earth shook), which means the tsunami. “But once we started calculating, it turned out that he had come to the islands 20 years ago,” said Chaubey.  “And he never went back because he lost touch with his family and was too poor to pay his way back.”

Though Jeevan, who is illiterate, had asked people to help him find his family, no one really had the time. But Chaubey had the whole afternoon to kill.

He took a notebook and pen and plopped down to give Jeevan’s story a hearing. “I was also interested because he said his village was in Sitapur district in Uttar Pradesh, which is not far from my home town,” Chaubey said. “He said his village’s name was Saraiyaan.”  Chaubey had a new interest – looking at the world (especially his home) on Google Earth, the programme that allows users to view satellite imagery at breath-taking levels of detail.

Chaubey is voluble and a charming storyteller with a subtle but sparkling wit. On being told this, he said he had actually wanted to be a radio announcer. But it is also probably his police training that subconsciously makes him seek out the right details – the angle of the daylight, the landscape, the voices of characters – for a rich story. And he found Jeevan’s story compelling enough to dedicate himself to finding his family.

Jeevan ran away from his village when he was 12. After working for a man he described as the village Thakur for a while, he fled from there also because he never paid him. “This was the beginning of my bad years,” said Ram Jeevan, who is approximately 38, over the phone from his village where he now lives, with his brother and nephews.

After working at a glass bangle factory in Firozabad for a few years, Jeevan met a man who brought him to the Andamans around 1995 and he started working as a helper at the canteen in a school. But then the tsunami struck, destroying the school, leaving Jeevan homeless and jobless. He wanted to go back to mainland but he only had Rs 1,000 in savings and a ship ticket cost about Rs 1,800 plus food for four days to Kolkata. Meanwhile, the man who had brought him to the islands had left. For the last ten years, Jeevan had been working in a bus driver’s house in Bridgeganj, tending to his fields and cows. Though he gave him food and lodging, the driver never gave him a penny in wages.

Hearing this, Chaubey committed himself to Jeevan. The questions Chaubey used to pinpoint Jeevan’s village tell the distinctions between an urban and a rural life in India. The markers of a village location are, for instance, the neighbouring villages, the annual mela location, the police chawki, the nearest railhead and roadhead.

On Google Earth, Chaubey struggled to locate Jeevan’s village but soon he found the nearest post office. This heartened Chaubey because “postmen know people and their family histories”. He also found the nearest police station online but could not find a phone number for either. Then he thought that he should check the nearest bank because their phone number might be online. He found a branch of the Allahabad Gramin Bank and it had a contact number.

Next morning, it was the first thing he did. The bank manager gave him the number of another branch closer to Saraiyaan village. At this branch, NP Yadav, the manager, answered the phone.

“He was a complete stranger and I had this weird request,” said Chaubey. “But you know how it is for us from the hinterland. Turned out Yadav was from Ghazipur district and I am from Benaras.  Then he agreed to help.”

Putting Chaubey on hold, Yadav stood up and announced loudly in the bank, “Listen up. Is anyone here from Saraiyaan?” A man Awasthi was from the village and he spoke to Chaubey. He volunteered to help with the mission too.

It turned out that Awasthi lived half a kilometer away from Jeevan’s home. He said the Jeevan’s father died in 2010 but his mother was alive. Chaubey asked him to tell Jeevan’s family that he was alive.

It was Rakesh Kumar, a childhood neighbor of Jeevan, who got the message first. Kumar used to be Jeevan’s playmate when they were children.  The next morning, Jeevan came around with his cows again. Chaubey told him his family had been found. He sat down and started crying and said, “I will talk to my mother after so many years.” Chaubey didn’t tell him about his father.

When Kumar and Jeevan’s aunt finally called, they asked for his family history. Kumar believed that it was his friend Ram Jeevan only when he correctly stated the names of two brothers of his grandfather. “This is the first news the family got of him in so long,” said Chaubey. “They had done pujas, gone to temples and police station for years. Some thought he had died.”

Now the question was how to send him home? He didn’t have any money because he hadn’t earned in 10 years. Chaubey also realised that someone would have to accompany him for a safe handover to his family. One of his acquiantances, the priest at the Police Mandir was going to Benaras on April 15 and he said he would take him along. “So I told Jeevan’s family to come to Benaras,” he said. “I also requested them not to get lost on the way because that would just be counter-productive.”

Chaubey got this friends to crowdfund Jeevan’s flight back home from among his friends. The policeman’s family packed some saris for Jeevan to take home. The airport security also helped him out because Jeevan wasn’t on the same flight as the priest. They tied red and gold dupattas to his luggage, so that he would find them easily on the conveyor belt at Kolkata airport.

Chaubey wasn’t ready to let Jeevan go unattended. He was terrified that he would get lost again. “I arranged for another man to take him from the airport to Howrah station and not leave till Jeevan was sitting next to Panditji on the Vibhuti Expres,” he said.

Finally, Benaras. Kumar went to receive him along with Jeevan’s aunt. “We must have been 10-15 steps apart,” Kumar said. “But I recognised him! We can’t even imagine how far he went. We had read about Andaman in geography class but had no idea where it was.” 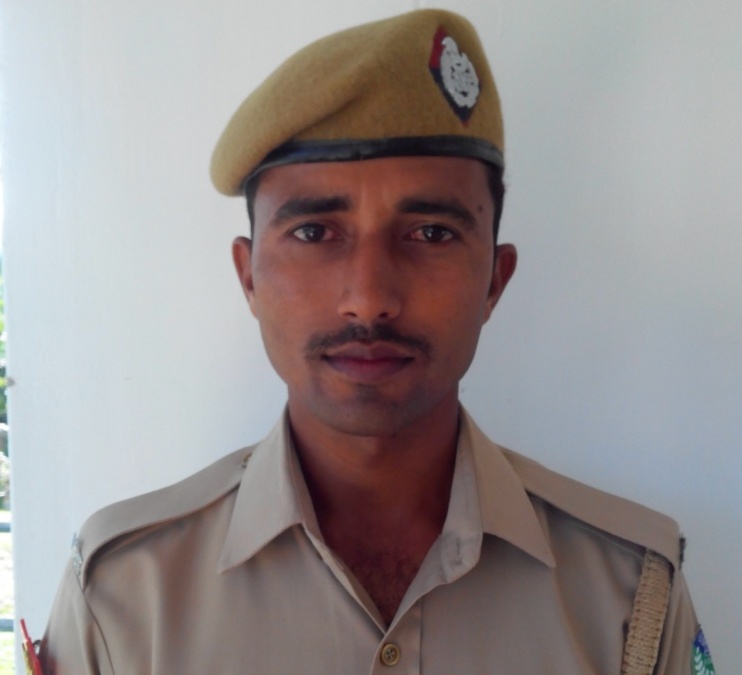 Brijesh Kumar Chaubey, the policeman who helped reunite Ram Jeevan  with his family.

Village Saraiyaan, with 500 families, has one main road that takes it to Sitapur. It was down this road that Ram Jeevan was welcomed back with band and music. “When I called him to ask after him, he didn’t have time to talk to me! I heard music in the background. But he called me back,” said Chaubey and he remembers what Jeevan’s mother said to him over the phone. “Budhhi aankhon mein jaisey roshni aa gayee. She had gone blind.”

At Ram Jeevan’s house, people are still incredulous. When this correspondent called his neighbour to talk to him earlier this week, he was sitting with Ram Jeevan. The phone was passed around the house from him to his brother, to his wife – everyone wanted to chat about him and thank Chaubey. Most of Jeevan’s family members work as labourers.

“I am not leaving my mother ever again,” said Jeevan. “What Brijesh has done for me I will never forget. No one has shown me a scrap of the kindness that he has shown. “Band baaja came for me. I danced a lot.”

All of Jeevan’s brothers are married. He says it is his turn now. But he doesn’t have a job. Jeevan’s family had sent Chaubey some money for the flight but the policeman refused to accept it. “I told the bank manager to buy Jeevan a cow, a good cow, with that money,” Chaubey said. “Jeevan’s folks are excited now. Soon they will be bored of him because that is family. I met him with his cows. He likes cows. It will be good time-pass for him.”