Contribute Now
Ad
With solid silver carriages, decorated elephants roaming as far as the eye could see, monarchs dripping with precious stones and even the king of the United Kingdom, the three Delhi durbars of 1877, 1903 and 1911 were all opulent affairs.

All three celebrated coronations. The first declared Queen Victoria the Empress of India twenty years after she proclaimed India a part of Britain. The second confirmed her son King Edward VII as Emperor of India and the third his son King George V. George, however, was the only monarch to attend a durbar.

Although Calcutta was then the capital of British India, Lord Lytton, Governor-General of India in 1877, chose a ground just outside old Delhi for the first durbar, believing that the former capital of the Mughals would have a greater cultural significance in the minds of Indians. The later durbars followed suit. The ground is still known as Coronation Park and has become the repository of unwanted statues of the British in Delhi.

The first durbar was modelled along the lines of a medieval European fair, but the second two became a chance to display the very extensive wealth of the British and Indian princes. 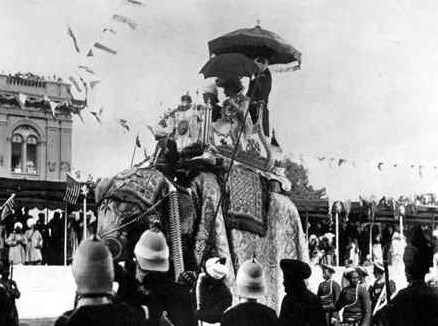 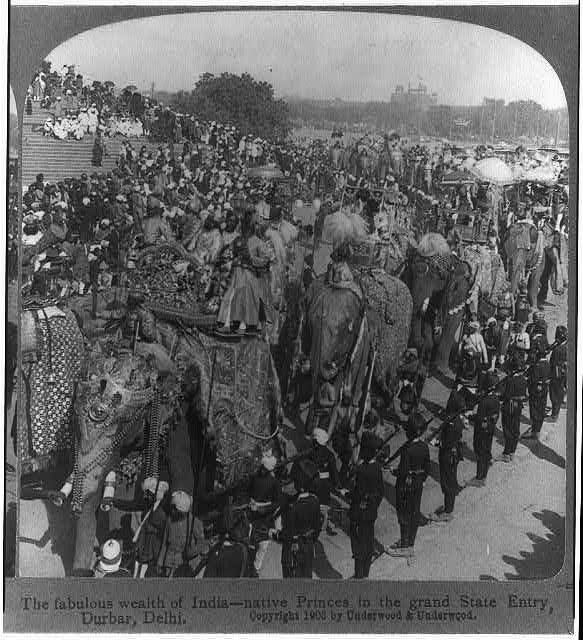 Native princes in the grand state entry, a procession of elephants, 1903. Photo credit: Library of Congress. 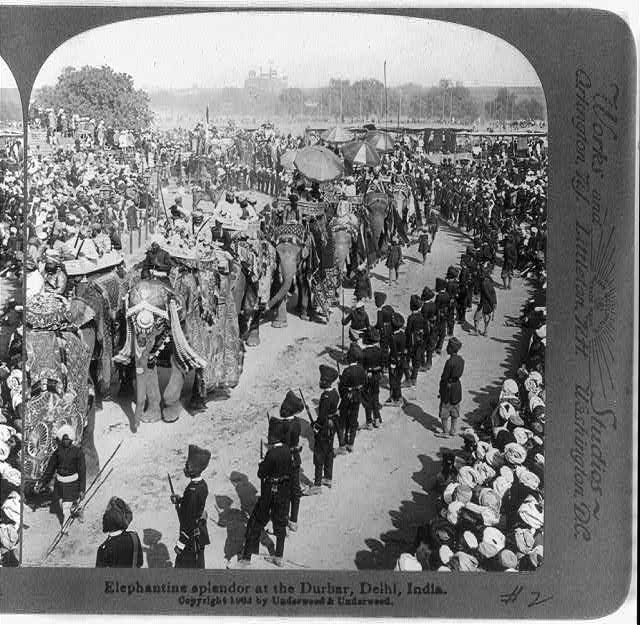 Elephantine splendour at the Durbar, 1903. Photo credit: Library of Congress.

But the durbars, organised by different Governor-Generals, were also blind to the country around them. The 1877 and 1903 spectacles, organised with great expense, were held in the shade of widespread famines in the country that had left thousands still in relief camps. When George VI assumed the throne in Britain and talk began of a fourth durbar, Indians threatened to boycott this and plans for it were shelved.

Even the patience of princely states had begun to run out by 1911. Rulers of princely states were accepted to attend in full regalia and swear allegiance to King George V. The protocol, they were told, was to bow thrice to the ruler and his wife Queen Mary and walk away backwards.

Sayajirao Gaekwad III of Baroda, however, created ripples by a pointed breaking of protocol, to the commendation of local press and the Indian National Congress. Gaekwad appeared without his finest jewels, bowed once perfunctorily, retreated a step and then turned his back on the monarchs. Baroda was then ranked third among the princely states of India after Hyderabad and Mysore.

His act happened to be caught on camera and screened widely in a film titled With Our King and Queen through India. Both the 1903 and 1911 durbars were extensively filmed and photographed.

The 1911 durbar was even filmed in colour, reels of which were lost until 2000, when they were recovered from a small Russian town.


The Library of Congress in the United States has digitised several photographs of the 1903 durbar. Here are some:

The eight-camel carriage of the Lieutenant-Governor of the Punjab, 1903. Photo credit: Library of Congress.

Richly adorned elephants and carriage of His Highness the Maharaja of Rewah, 1903. Photo credit: Library of Congress.

His Highness the Raja of Jind, in his solid silver phaeton, at the amphitheatre, 1903. Photo credit: Library of Congress. 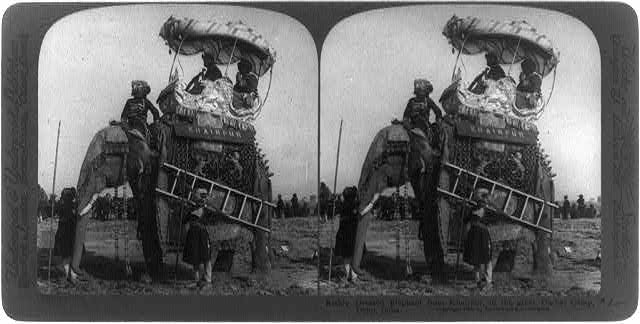