Contribute Now
Ad
It was an unlikely sight. As school children in green and white uniforms sang a Tibetan version of If You’re Happy and You Know It Clap Your Hands on a warm afternoon in upper Dharamsala, a distinguished octogenarian dragged his reluctant friend out of his seat to dance along to the music. The enthusiastic man was South Africa’s Archbishop Desmond Tutu and his friend was the Tibetan spiritual leader, The Dalai Lama.

The event at the Tibetan Children’s Village School on Thursday afternoon was one of the many programmes planned to celebrate the Dalai Lama’s 80th birthday this year. Though it falls on July 6, the festivities have already begun.

It was a perfect day for a party. The weather was clear and the Himalayas were framed with fluttering Tibetan prayer flags, red, blue, green, yellow and white with Buddhist mantras printed on them. As the guests drove in, young Tibetan women dressed in traditional gowns and beaded headgear burst into welcome songs. Thousands of Tibetans, monks, nuns and tourists had gathered to watch the spiritual leaders talk to the school children and take questions from them. 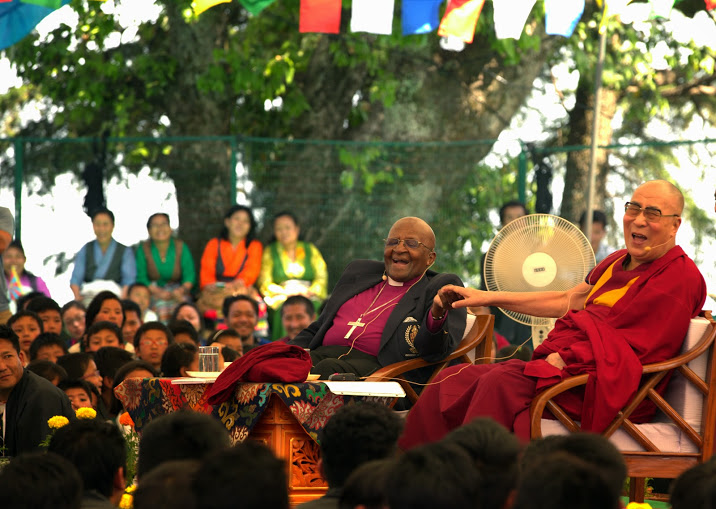 Before the Dalai Lama began his address to the children he turned to his friend Tutu seated beside him and quipped, “Since you often describe my English as very poor, I am here going to speak Tibetan” – and then burst into his trademark laugh. The Tibetan leader told the students that Tutu was one of his closest friends, one of the “greatest Tibet supporters” and “the greatest supporter of truth and justice”.

Thanking the Indian government for its generosity, the Dalai Lama told the Tibetan children, since they are born in a free country and had ample opportunities and facilities, they should study hard and make the most of them.  He emphasised the importance of preserving the Tibetan language. “The Tibetan language does not have much utility in daily life or for trade and commerce or modern studies,” he noted. But the language, he said, helps unlock “a deep study of the mind”.

After the children sang and old friends had danced, a large white cake was brought out for the Dalai Lama. As the audience joined in to sing Happy Birthday for the Dalai Lama, the Archbishop invited two children to blow out the candles . 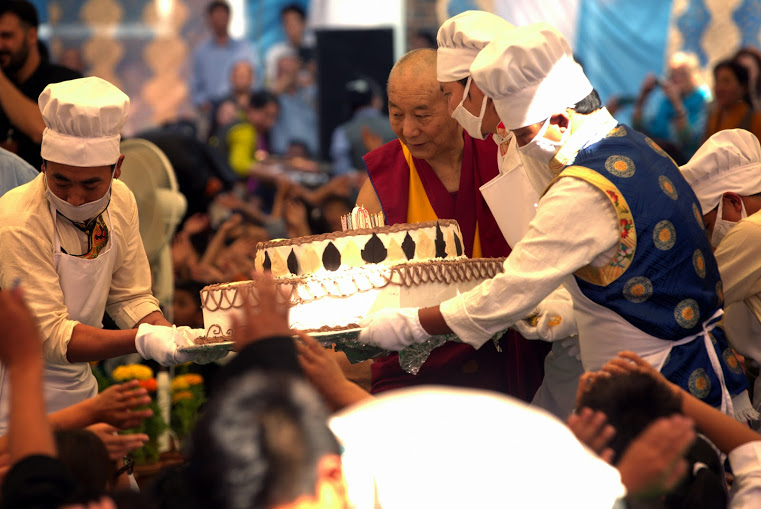 This is Desmond Tutu’s second visit to Dharamsala, the seat of the Tibetan government in exile. His first trip was in February 2012, soon after the South African government buckled under Chinese government pressure and denied the Dalai Lama a visa to attend the Tutu’s own 80th birthday celebrations. This has been a repeated pattern. The last time such an incident occurred was in October 2014 when the Dalai Lama was invited to attend a Nobel Laureates conference and peace summit in Cape Town. Eventually, many of the laureates, including Desmond Tutu, threatened to boycott the event and the conference was moved to Rome.

Tutu had flown in from Delhi on a private jet on Saturday, with his daughter Mpho and his entourage, to move ahead with a book he and the Dalai Lama are collaborating on. They have been discussing “joy” and their conversations are being filmed.

The South African leader told the Tibetan children not to give up hope and said he was certain they would be able to resettle to their homeland. “You are loved throughout the world,” he said. “And we want to say to you, young people especially, that it might not seem possible, it doesn’t seem like it’s something that will happen, but you will one day return to a free Tibet.”

He compared their struggle to the efforts in his own country to overthrow apartheid. “We in South Africa for many years lived under a system of injustice and oppression,” Tutu said. “And many, many of our leaders and people, young people, went into exile and it seemed like the chains of oppression would never be broken....our leaders who were on Robben Island in prison would never come home alive.”

He paused and squealed, “But youuuuou! It happened! It happened in 1990s! Our beloved Nelson Mandela and others were released from prison and the exiles came back, came back home. One day you too, all of you one day you will see your beloved Tibet. You will be free from the oppression that has driven you to here.”

He added: “The Chinese government will discover that freedom is actually cheaper than oppression.” 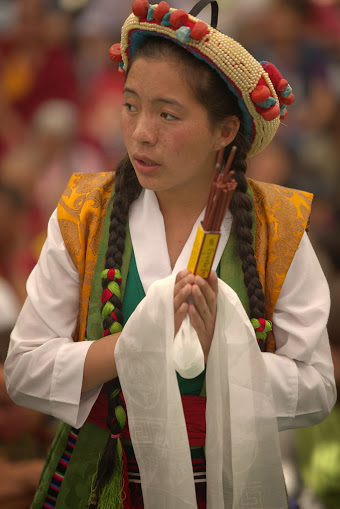 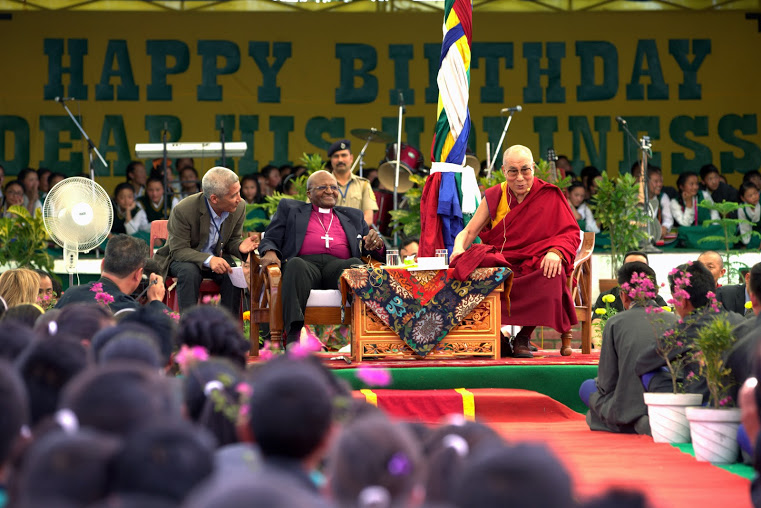 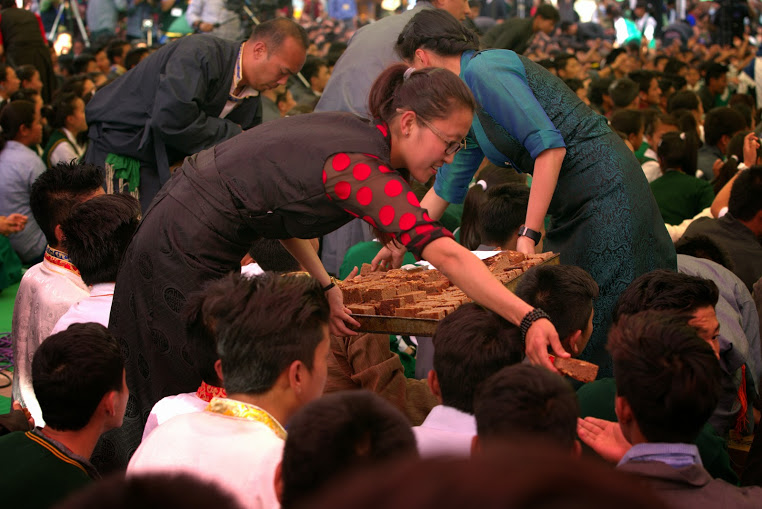 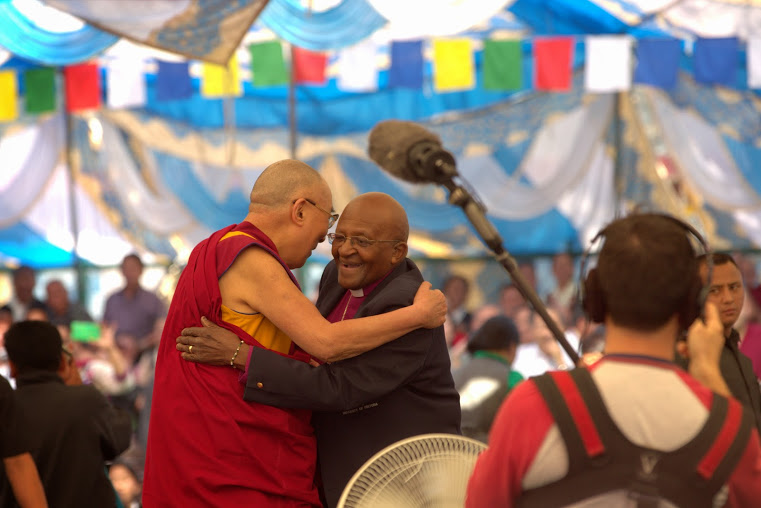