Contribute Now
Ad
Who would have thought that Prime Minister Narendra Modi was a secret reader of Ashis Nandy, much less an obedient one? Turns out he not only reads him but also takes him quite seriously.

I was not aware of it myself until earlier this week. A day earlier, I had written a somewhat frivolous piece on my blog about the chadar offering made by US President Barack Obama at the shrine of Khwaja Mu’inuddin Chishti in Ajmer. I had speculated that the suggestion for this somewhat-gaudy gesture might not have come from the mandarins of Washington, much though they had been pushing something called “Sufi Islam” as an antidote to something they called “Islamic Extremism”, and that it could have emerged in one of those genial “Hi Barack!” “Hi NaMo!” meetings we had much heard about not so long ago. I had written:

"Could it be that it was not some hapless junior officer at the Embassy but Prime Minster Modi, who recommended this low cost-high gain 'sheet diplomacy' to his friend, admirer, and biographer in the White House as a tactical move in our endless War on Terror? And that it was the Defender of the First Amendment in D.C. who decided to go along if only to humor his newfound soulmate in New Delhi?"

Turning to the archive

Then on Thursday I got a note from a good friend, a man with a steel-trap memory for the sublime and much else. As usual, he pointed me in the right direction. In this case, to Out, Damned Spot!, the record of a brief interview Nandy gave to Saba Naqvi and Prarthna Gahilote exactly three years ago, where he had spoken in his usual sagely manner:

"If I was Narendra Modi’s psychotherapist, I would have told him: my dear friend, if you wish to play a larger role in national politics, you need to reflect. You cannot go directly from the chief minister’s office in Gujarat to the prime minister’s office in New Delhi. Buy peace in the interregnum. He should go to a dargah. Go to Ajmer Sharif and apologise. The Khwaja is supposed to be benevolent and very forgiving."

It seemed to put to rest the line of speculation that yet another good friend had tempted me with. That worthy man had suggested that it was more likely the other way around, that it was the Nobel Peace Prize winning President who had given the advice to the prospective-candidate Prime Minister, and then set an example for him by acting upon it first. My friend wrote:

"Mr Modi, as you might now, has worn all manner of religious and ethnic headgear while crisscrossing India. Among these are Sikh turbans, Naga headgear with possible human skeletal remains, Arunachal hat with a hornbill's long overhanging beak, and every variety of Hindu headgear. However, the one time a Muslim cleric attempted to place a skull cap on Mr Modi's head, the latter snatched it with a degree of hand-eye coordination and speed which was unmatched even by the hawk that daily attacks the squirrels in our backyard. I believe the American president is telling his new buddy that he can at least let a green sheet be held over his head."

That sounded convincing, particularly when a couple of hours later I saw pictures of two more elaborately embroidered chadars. 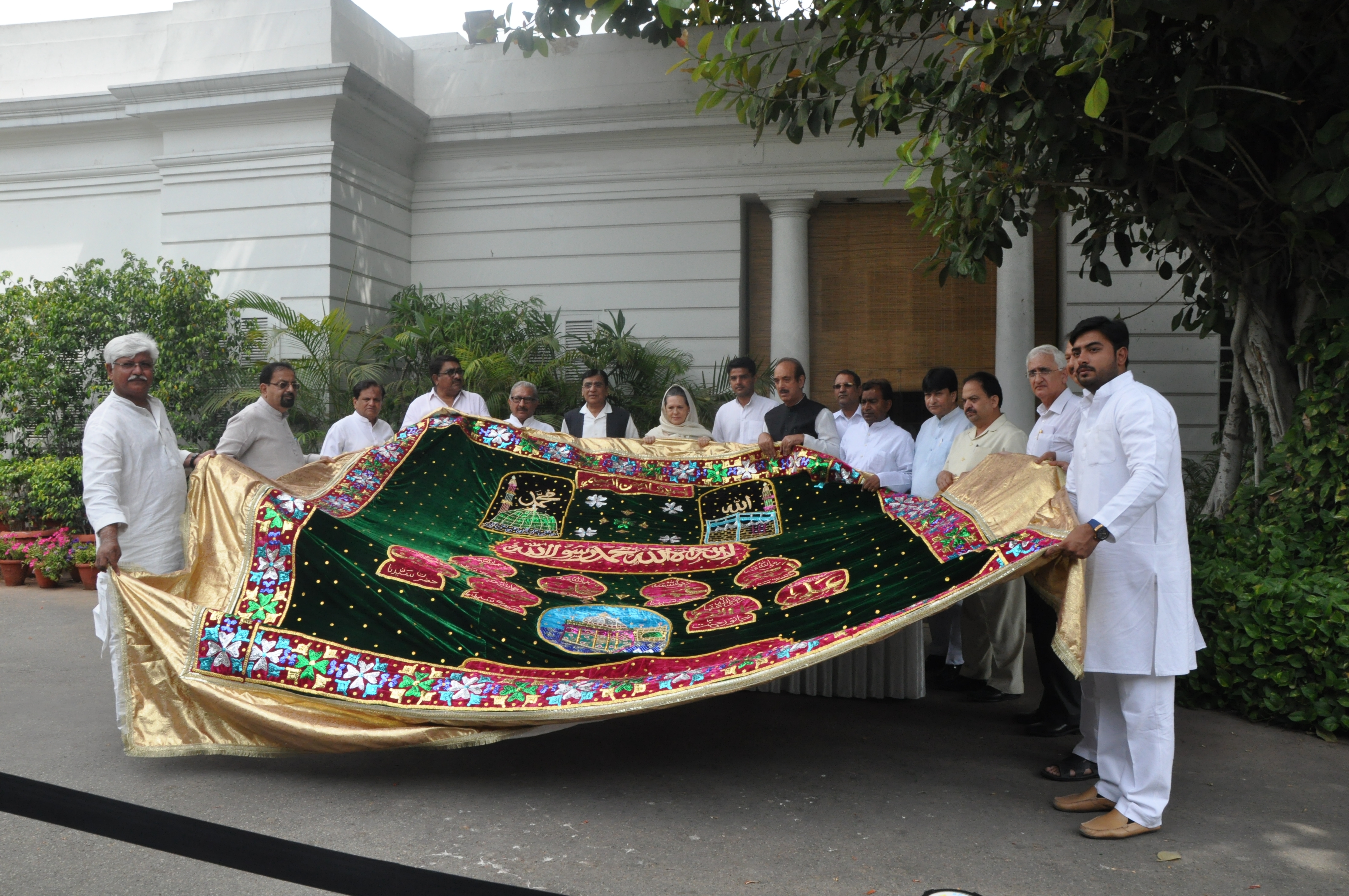 One was held up by a smiling Sonia Gandhi and 15 not-very-smiling members of her coterie of so-called pseudo-secularists – latter surprisingly all men. The other chadar was held up to public view by only two men, both of the real secularist kind, one faintly smiling and the other looking rather grim – with no one else in sight, not even another man.

Where are the women?

Here I must digress and ask: What happened to the female usual suspects? Why is it that on this notable occasion Indian women were deprived of the honour of holding up a chadar before a bevy of newsmen when, in fact, many of their sisters elsewhere are often forced to wear one whenever they appear in public? The first half of my hyphenated Indian-American identity was grieved to see that. The second half, however, was gratified to see that the American Embassy had strictly observed the rule about gender discrimination, and very properly sent one man and one woman to place the US President’s chadar on the blessed grave.

Returning to my second friend’s speculation, I’m happy to report that years of academic sophistry plus memories of a childhood spent only 17 miles from Lucknow, the place once reputed to set the rules for polite behavior and civil manners, came to my rescue. I revised my original speculation. Now it went something like this. Modi indeed set the ball rolling. During one of his many tête-à-têtes with the American Commander-in-Chief, he could have said, “Listen, Barack, it would help you in your War on Terror if you won over the hearts and minds of Indian Muslims. There are more of them than you think. I intend to do the same ‒ you know, for the sake of my ‘War on Pseudo-Secularism’.” And then, once the President had nodded his agreement, the Prime Minister did what befit a man of true humility, he let his friend go first. Pahle aap!

I started to feel happy. My speculation, after all, could be said to have been right all along. All right, at least in my sight. And then, in some sense or another, I had the words of the one and only Ashis Nandy on my side, words of someone I had long respected and admired. But some doubt still niggled. How could the Man-with-the-56 inches-Chest allow himself to be swayed by the words, not matter how wise, of a man who could at most claim a belly of 36 inches? It did not make sense. I did what academics do – I returned to my “archive.” It didn’t take very long to discover where I had erred. I had committed the unforgivable mistake of not reading a text carefully enough. Here are those wise words again:

Obviously, Nandy did give the advice two years back, and Modi did take it to his heart – but only on his own terms. He saw the wisdom in Nandy’s words, but did not like Nandy’s low opinion of his abilities. Nandy’s words were a challenge as much as an advice. He had to prove Nandy wrong, and Modi did just that ‒ he made sure to go first directly from the chief minister’s office in Ahmedabad to the Prime Minister’s office in New Delhi. And only after having met Nandy’s challenge, did he turn his advice and set his eyes on Ajmer. And even then, he didn’t go in person; he sent only an emissary, Mukhtar Abbas Naqvi, a long-time loyal member of the Parivar whom he had first snubbed by denying him a place in his first Cabinet. The man is peevish. He is ruthless. But I can also hear him crooning some years down the road like the dear Ol' Blue Eyes, the lamented leader of a very different Rat Pack:

For what is a man, what has he got?
If not himself, then he has naught
To say the things he truly feels and not the words of one who kneels
The record shows I took the blows and did it my way!

We may laugh at Modi, but we must always take him deadly seriously. Particularly as we laugh.