Contribute Now
Ad
The Supreme Court’s verdict in March striking down the Indian government’s decision to include Jats in the Central list of Other Backward Classes generated a surfeit of misjudged commentaries. These stories differed in details, but their essence was the same: OBCs are emerging as the new elites. A report on the news site IndiaSpend, for instance, claimed that OBCs are cornering reservations. It further went on to suggest that they are better off than Scheduled Castes and Scheduled Tribes, groups that face severe social discrimination in India.

Both these contentions are misguided. Instead of comparing OBCs to SCs and STs, the writers of the report would have done better to contrast them with the privileged Savarna castes.

The Other Backward Classes is an umbrella term used for a range of castes and communities that are socially and economically disadvantaged. Together, the groups make up between 41% and 52% of the country’s population.

To understand why they aren’t cornering reservations, a look at public sector employment is enough. Despite their large numbers in the population, OBCs hold less than 15% of government jobs, according to a 2012 report of the Ministry of Personnel. Even this figure is probably overstated given that a 2007 Times of India report had pegged their job share at 5%, and the figure is unlikely to rise 10 percentage points in five years. Nevertheless, even if we accept the 15% figure, the same Ministry of Personnel report notes that OBCs hold only 8.4% of Grade A jobs.

The IndiaSpend report, to establish its argument, makes much of the extensive provisions of affirmative action for OBCs in six large Indian states. But that is only a part of the picture. Table 1 contextualises the extent of those provisions against the population of OBCs in those six states. 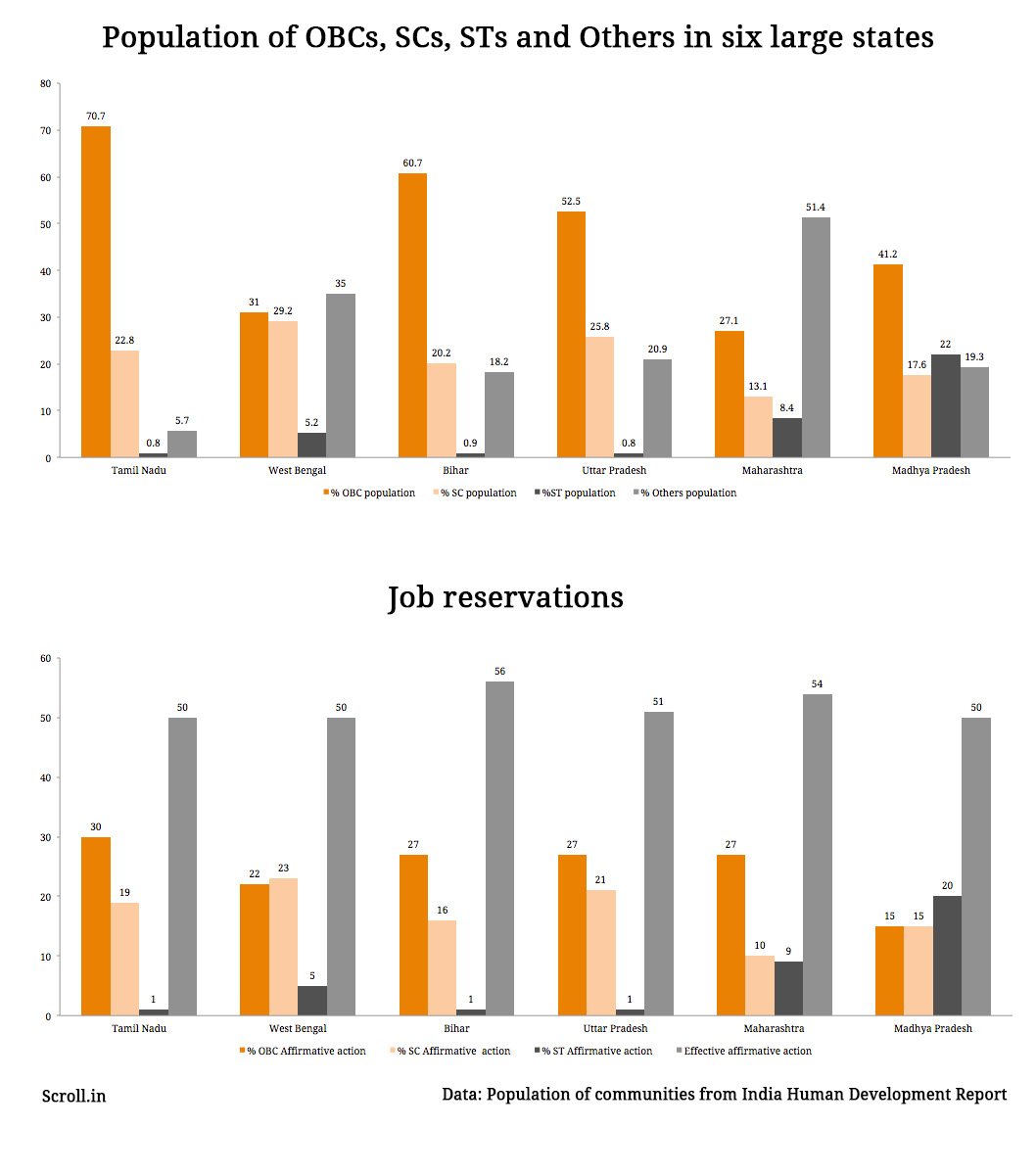 As the table makes it clear, the provision for OBC affirmative action in every state is less than their population share there.

Even if the proportion of the reservations for SCs, STs and OBCs are added together, it turns out that the total does not exceed 50%, as mandated by the Supreme Court. That leaves 50% of all jobs, and in some states more, effectively reserved for the category of “Others”. If anything, it is these Others whose effective affirmative action outstrips their population share. It is these Others, not OBCs nor SCs nor STs, who are cornering jobs.

The report also goes about the wrong way when discussing deprivation. It uses data to correctly suggest that the socio-economic conditions of OBCs, as a group, are better than those of Dalits and adivasis. But this, again, is an incomplete portrait. An analysis of the complete table from where that data is drawn reveals the gap between OBCs and the privileged Savarna castes. 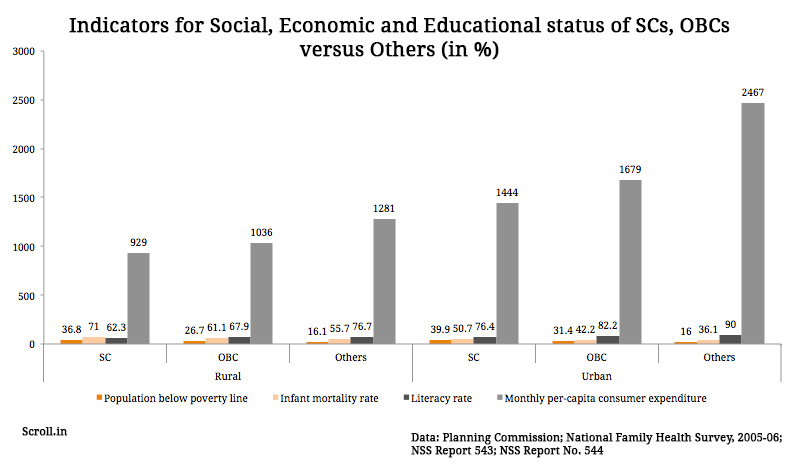 Note the inequalities between OBCs and the category of Others, which includes several groups of marginalised Muslims who face considerable deprivation.

That OBCs are far worse off than the privileged communities has been pointed out by economists Ashwini Deshpande and Rajesh Ramchandran in their analysis of the data generated by the National Sample Survey Organisation on the social clusters of SC/STs, OBCs, and Others.

The economists tell us that if the Monthly Per Capita Consumption Expenditure for Others was Rs 100, then for SC/STs the figure was Rs 57 and for OBCs it was Rs 69. Put simply, if Others earned Rs 100 annually, OBCs earned Rs 57 and SC/STs Rs 42.

In urban areas, which are often celebrated as equalising spaces, these differentials are even starker. An editorial in the Economic Times compared the distribution of households of these three categories across income levels. They divided the population into 10 income classes, each with 10% of the households. Less than 5% of Dalits and 7-8% of OBCs were represented in the top decile of households (against the norm of 10%, assuming that inequality, were it to exist, would be randomly distributed across categories). On the other hand, over 15% of Others were in the top decile.

The IndiaSpend report could have argued that select classes of select communities among OBCs have cornered affirmative action quotas. That is a valid objection. But to accuse all OBCs of collaring reservation quotas is unfounded. The report’s headline is correct: India’s politically powerful castes are cornering reservation benefits. But it is not OBCs – it is the privileged Savarna castes who corner effective affirmative action.

Without international legitimacy, the Taliban cannot think of ruling Afghanistan