Farooque, who as a student of Islam uses the honorific "Maulana", makes the trip in the company of half-a-dozen fellow preachers of the Tablighi Jamaat, an Islamic movement that encourages followers to travel among Muslims to revive the faith.

The group takes a train to Delhi, where they change to another train to Muzzafarnagar. “Usually, the Utkal Express from Nizamuddin which goes via Meerut,” he said. “But this time, our train reached Delhi late, so we ended up taking the Janata Express from Old Delhi.”

On board the Janata Express on Friday, on an unfamiliar route, in a packed general compartment, two hours into the journey, Farooque made his way through the crowd to use the toilet. In the passage outside the toilet, he asked a group of five or six young men to make some room, when they pounced on him, punched him, pulled his beard, and snatched the Rs 20,600 he had on him.

“People were watching this happen but did not say a word,” said Farooque. “This would not happen in our Maharashtra. There, people intervene. But here I saw no insaaniyat [humanity].”

Farooque interpreted the experience through the prism of regional differences, but the train was passing through an area riven with religious tensions. This part of western Uttar Pradesh had witnessed violent clashes between Jats and Muslims in 2013 that had left more than 100 dead and several thousands displaced. When Farooque walked back to join his friends, disoriented, with a nose bleed, holding strands of his beard in his hand, other Muslim passengers urged him to get off at the next station and file a complaint. “They told me such attacks have become frequent on this route. At least two or three incidents had taken place over the last month," Farooque said. 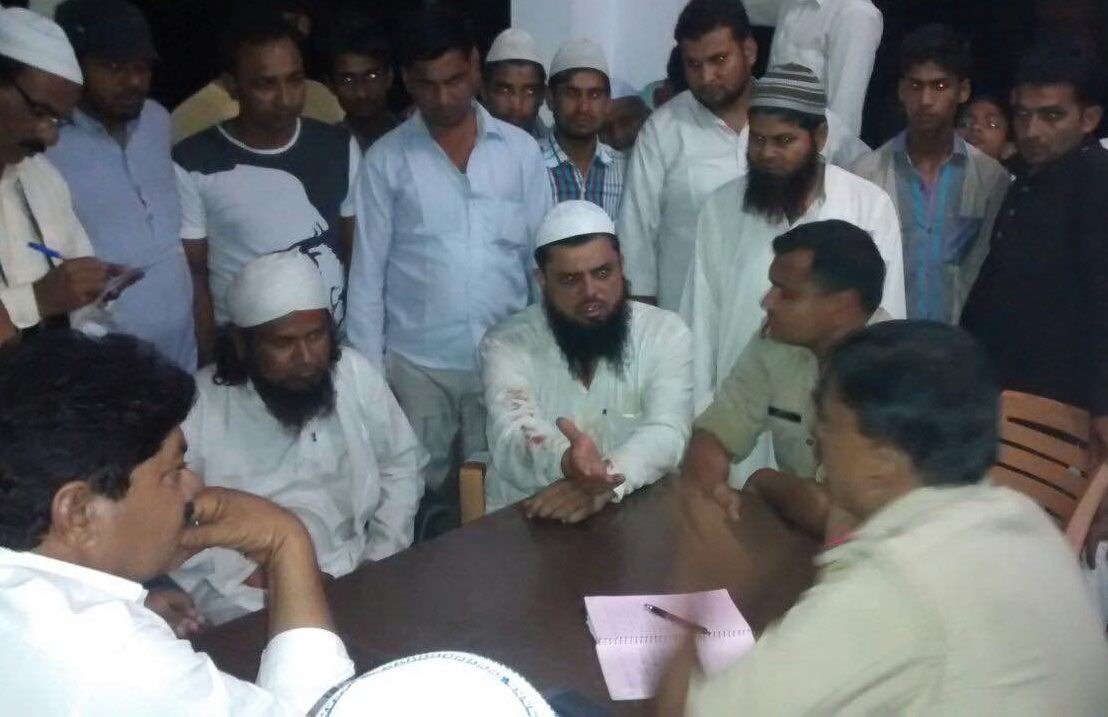 Farooque filing a complaint at the Kandhla police station. Photos by Special Arrangement.

The next stop was Kandhla – a qasba in Shamli district, with a single platform railway station, so small that it does not even have a tea seller. Farooque, his white kurta spotted with blood, stepped out in the warm air around 6 pm on Friday. Little did he know that 12 hours later, thousands of local Muslims would gather on the railway tracks to protest against the attack on him. A hundred-odd people would clash with the police, pelt stones, clamber on top of the engine of a stranded train. A young man would be hit by a bullet. By evening, social media would be aflame with the hashtag #GodhraAgain, with Hindutva groups drawing parallels with the 2002 incident in which a bogey of the Sabarmati Express was set on fire in the town of Godhra, followed by weeks of intense riots in Gujarat.

What has come handy for the Hindutva narrative is the fact that one of the two trains stranded on the tracks was the Bikaner-Haridwar Express. Messages being passed around through WhatsApp claim the Muslim mob intended to harass Hindu passengers (with the train headed to Haridwar, the presumption made is that everyone on board was Hindu). While it is true that the protestors climbed atop this train and not the other one at the station, Ajay Chouhan, the police officer who heads Kandhla police station, had a good explanation: "We were blocking the path to the train standing on the platform, so the protestors moved towards the train standing at the outer signal."

In Kandhla, a Muslim-majority town, the conversation centres around the political divisions within the Muslim community. "There was spontaneous anger when we heard about the attack on the Jamaati," said a middle-aged contractor. "Even I joined the protest. Why should I lie? But the townsfolk were not part of the violence. That had to do with rajneeti [politics]."

Rival leaders were jostling for prominence on Saturday. The next day, the same leaders were passing the blame to each other.

Surrounded by his supporters in the plush living room of his home, the chairman of the municipality, Samajwadi Party leader Haji Wajid Khan, also called Babla, claimed that he played no role in the rail roko. The call for the protest came from Nahid Hasan, the first time MLA of Kairana constituency, also from the Samajwadi Party, who lives about 20 kms away.

Khan's recounting of the events was disrupted by a phone call, followed by the entry of a tall man, who everyone addressed as mantriji (minister). Although no longer a minister, 62-year-old Virendra Singh Chauhan is a political veteran. Gujjar by caste, the six-time MLA lost the last election in Shamli but still enjoys support among both Hindus and Muslims. “This town has never witnessed a riot," he said. "It was peaceful even in 2013. But the Bharatiya Janata Party is planting mischievous elements on the trains to target those with beards and burqas.”

Even if that was so, wasn't it unwise to mobilise thousands of protestors in a communally sensitive area?

Singh eagerly nodded his agreement. “It is unfortunate that my young party colleague Nahid Hasan had already announced a rail roko by the time I got here,” he said. “The police got in touch with me. I assured them that nothing would happen. As the ruling party of the state, how can we block the trains? But word had already gone out and people arrived in the morning from nearby villages.”

Local journalists claimed that the gutbaazi  (factionalism) within the Samajwadi Party contributed to the chaos on Saturday. Hasan's rivals had a vested interest in derailing the protest since any violence could be pinned on the MLA.

Speaking with TV reporters in Shamli, Nahid Hasan claimed he had left the protest soon after the police officials assured him that arrests would be made within 24 hours, and well before the stone pelting began. "I had taken away my public. Whose public was left, I don't know."

But it wasn't just intra-party rivalries but also competition between political parties. Khan, the municipal chairman, claimed he went to the protest site next morning to persuade people to disperse after the police superintendent promised prompt action. “Four thousand people walked away with me, another few thousands with Nahid Hasan Sahab, but the former chairman Haji Islam [of Bahujan Samaj Party] stayed back with his supporters," Khan said. "He wanted to show that SP is backing out of the fight for the community because it is the ruling party.” 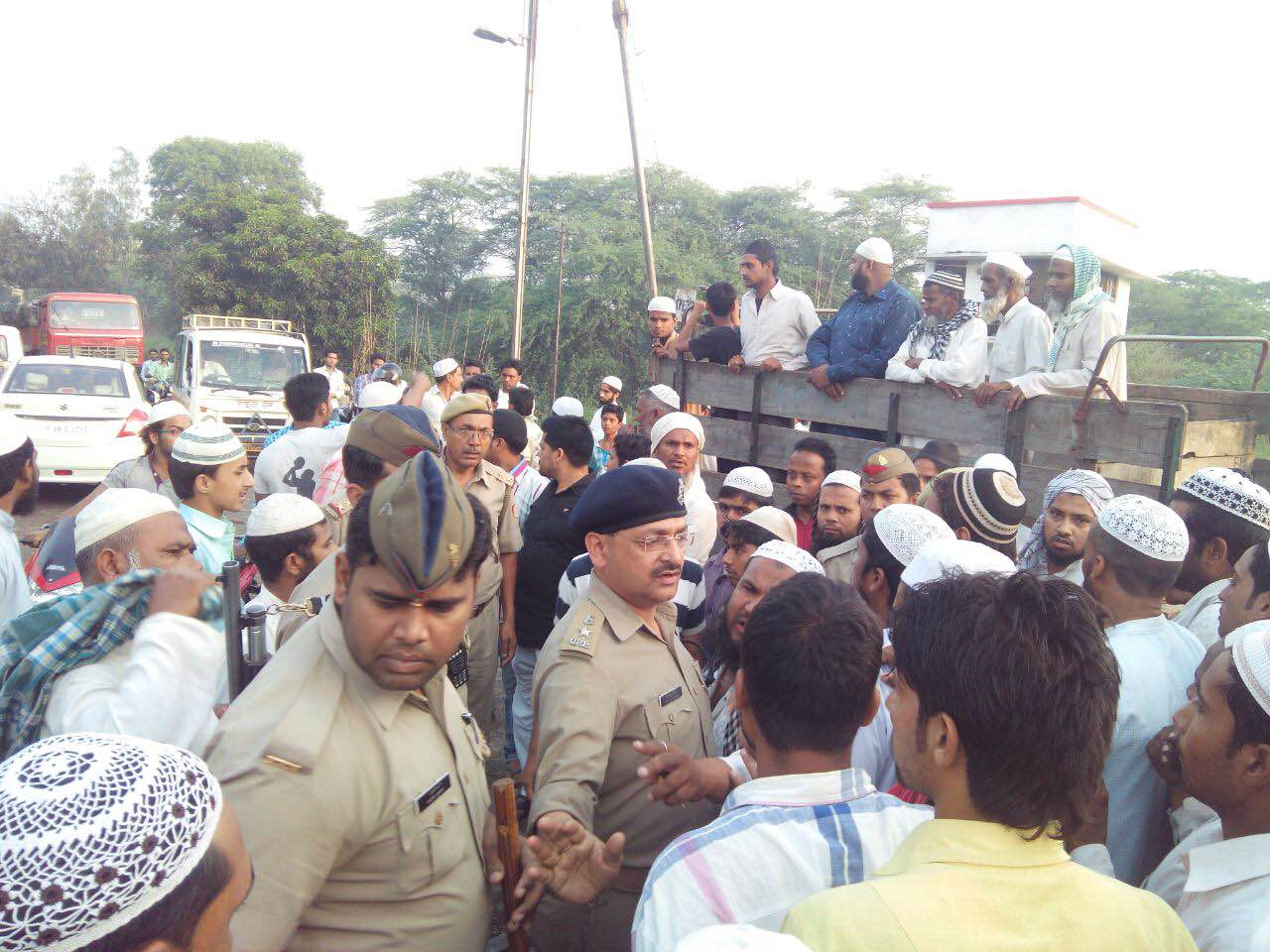 The local police has filed two first information reports. One for the violence at the railway tracks, in which five people have been named, along with 2,000 other unnamed persons. The other FIR has been filed for alleged arson at the police station. The police claims the retreating protestors pelted stones at the thana and set seven vehicles on fire. (The municipal chairman claimed the police themselves set fire on the vehicles to deflect blame for their heavy-handed lathicharge at the railway tracks.) Haji Islam, the BSP leader, is the only person to be named in both the FIRs.

Islam belongs to a prominent family of fruit exporters. His home lies in the narrow lanes of the Mridgan neighbourhood, not far from the masjid-markaz of the Tablighi Jamaat, where Farooque spent the night before heading to Saharanpur next morning. Although small, the markaz (centre) draws special reverence since the founder of the Jamaat, Muhammad Ilyas Kandhlawi, hailed from Kandhla.

At Islam’s house, his children hesitated to open the door. His wife, Shabnam Begum, polite and restrained, said her husband was away for a relative's surgery. But when asked about the FIR, she could not contain her indignation. “Is the law of this country blind? How can they implicate my husband?” Asking her children to pull out the newspapers from the past week, showing pictures of her husband sitting on a dharna outside the police station demanding justice for the rape of a mentally-ill minor girl, she said he was far too preoccupied until late Friday night to mobilise his supporters for any rail roko. He went to the tracks in the morning simply to show solidarity with townsfolk. “They [the police] don’t have the courage to book the miscreants of the ruling party, so they are going after my husband."

By late evening, however, the third FIR had been filed – this time by the Railway Police. The FIR named both the Samajwadi Party MLA Nahid Hasan and the municipal chairman, Haji Wajid Khan. 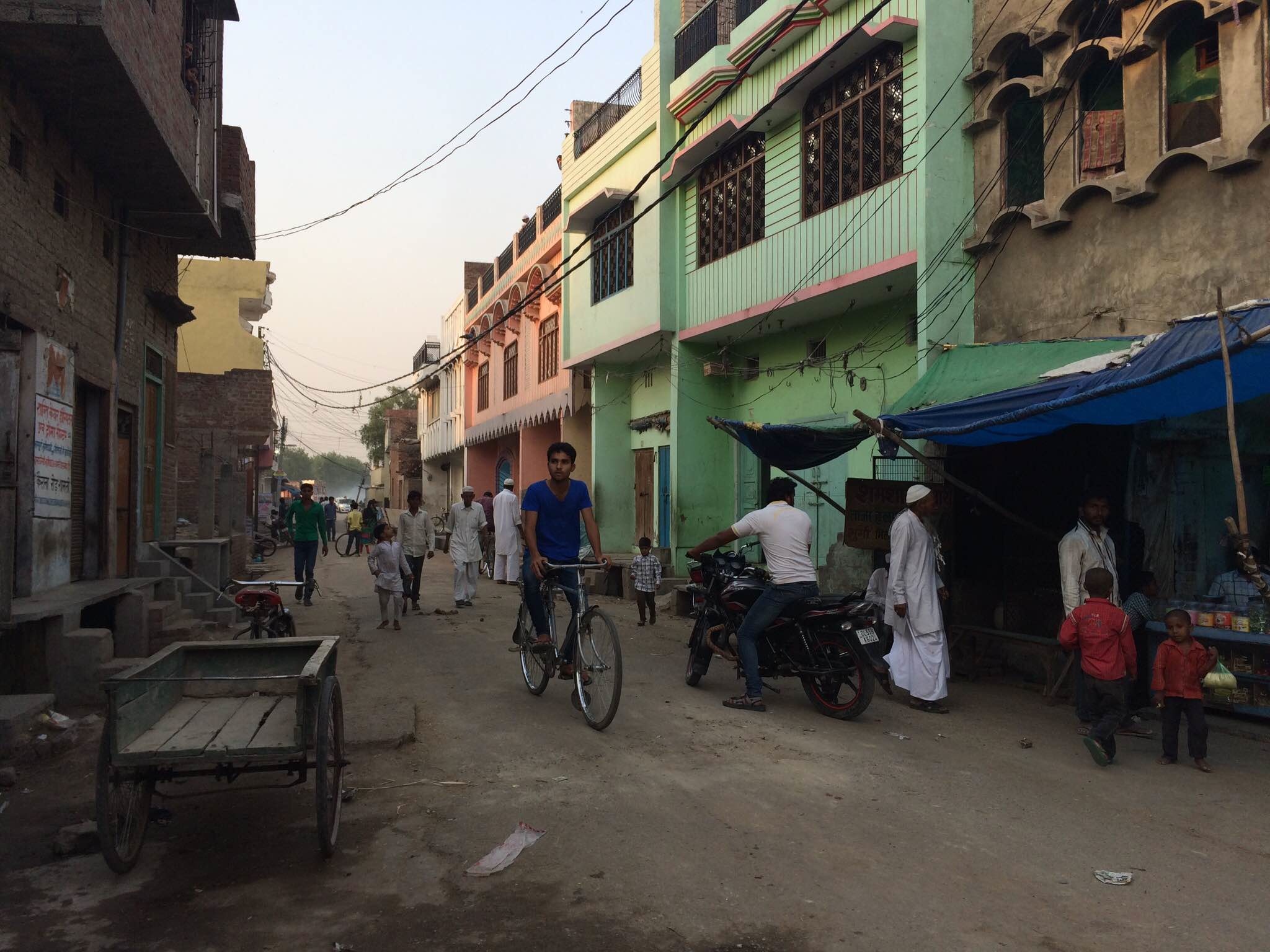 After a tense lockdown on Saturday, the shops in Kandhla opened on Sunday but people from nearby villages stayed away. At a tea shop on the highway, Jat men traded stories of how a sea of 70,000 topis had been mobilised to carry out something "big". (The additional superintendent of police, VK Mishra, who was present at the spot on Saturday, pegged the crowd at around 5,000 people.)

Two Muslim shopkeepers, who cycled patiently on an empty and broken road, laden with bags filled with chips and biscuits, said they had not found the courage to go to Kandhla to pick up supplies and instead had headed 20 kilometres to the town of Baraut. The events of Saturday had inconvenienced them, they said, but in the very next breath, they added, should the Jamaatis have been attacked on the train?

Orchards were laden with tender mangoes, fields were ripe with sweet cane, but the countryside in western Uttar Pradesh remains raw with suspicion.

Section 144 imposed in Aligarh after clashes over Jinnah portrait at varsity: Report