Contribute Now
Ad
At a gathering in Paris last month, drawing attention to the coal block auctions that have taken place under his government, Prime Minister Narendra Modi boasted, “Twenty coal blocks out of 204 have been auctioned so far and we got more than Rs. 2 lakh crore from them.” The factual error in the statement – 31 blocks, not 20, have been auctioned in two rounds – might be the least of the problems with the government's triumphal sentiment.

To start with, as a report in Business Standard explains, the Rs 200,000 crore is not a one-time payment flowing into government coffers, but revenues that are likely to accrue over the lifetime of the mines. These revenues include royalties that states would have earned regardless of whether the mines had been allotted or auctioned.

While auctions are an improvement over the discretionary allotments of the past, and the government has shown swiftness in moving ahead with them, what isn't well understood is that the design of the auctions has a significant impact on their transparency and outcomes. Competitive auctions are meant to provide a market-based mechanism to discover the value of a resource. But poor design could impede price discovery.

As the government prepares for a third round of auctions, Scroll in a two-part series, takes a closer look at the first two rounds. Our analysis raises worrying questions about both the design of the auctions and their outcomes.

For the auctions, the coal blocks were divided into two categories – regulated and unregulated. Power projects fall in the regulated category. Eleven blocks have been auctioned in this category through reverse bidding, where bidders had to compete on the discount they would give electricity boards on their cost of mining. In India, the cost of coal is passed down to the end customer. In other words, if two companies' cost of mining is Rs 500 per ton and one offers to charge the electricity board Rs 350 while the other wants to charge Rs 400, the first one will win.

The auctions were conducted in two stages. The first stage – the technical bid – was open to all companies. In the second stage, 50% of all technically qualified bidders or five bidders, whichever was higher, were selected for the electronic auction. What shrunk the pool further was that companies were allowed to place bids in two ways – either as a single bid for the company, or on behalf of their individual power plants. There are apprehensions that the two conditions have resulted in shallow auctions, with few participants.

It is unclear why the government decided to not allow all the technically qualified companies to bid in the second stage. Vivek Bhardwaj, a joint secretary in the Coal Ministry who is overseeing the auctions, did not explain the decision to cap the number of bidders. Instead, he said the matter had been examined by the Delhi High Court and that it had agreed with the Centre's decision.

He is partly right. The clause limiting bidders in the second round led Sarda Energy and Minerals to challenge the auctions in the Delhi High Court. The judgement from Delhi High Court judges, Badar Durrez Ahmed and Sanjeev Sachdeva, contains this summary of Sarda's apprehension: “The case of the petitioner is that...a single company, having several end-use plants, can have multiple bids...this essentially means that while there may be four bids for separate specified end-use plants of the same company, but that may boil down to only one bidder. And, therefore, in that sense, competition may be stifled at the electronic auction stage.”

In its defence, the government cited the difference between the floor price and the closing bids to argue the auctions were working well. In their judgement on February 18, Ahmed and Sachdeva accepted the government's defence.

However, a month later, energy and coal minister Piyush Goel told the Lok Sabha the ministry was investigating if Jindal Power and Balco had won blocks by forming a cartel. In the block of Gare Palma IV/2 &3, for instance, there were just three bidders – Jindal Power, GMR and Adani. Jindal had put in three bids on behalf of three discrete power projects. Shortly after the bids, the coal ministry rejected bids from both companies. Press reports at the time said the ministry felt these did not reflect “fair value” of the coal.

Value of the coal

But what does fair value of a coal block mean?

Currently, about 90% of the coal mined and sold in India comes from Coal India Limited, the government mining company, at prices fixed by the Coal Ministry. Called notified prices, these vary per grade and are less than half of the price of imported coal of an equivalent grade. They are also lower than the price at which Coal India sells small quantities of coal through e-auctions. For all practical purposes, the notified price is the lowest price at which a company can legally get coal in India.

While bidding for a coal block, a company is expected to calculate the advantage it gets by having its own captive block over rivals who buy coal from Coal India – whether it is through e-auctions or the notified price. Put differently, a company has to find a price where it can pay the government for the unmined coal, pay royalties and taxes, incur mining costs, and still be competitive against its rivals.

At the same time, as demand for coal rises, Coal India's supplies have come under pressure, creating uncertainty for its buyers – who have had to mix domestic with expensive imported coal. For this reason, companies were expected to see value in bidding above the notified price – for the sake of fuel security.

The notified price, hence, is the fulcrum over which the value of the coal rests, but it is not the sole factor.

Before we get to the results, a note on our methodology. Notified prices vary according to the grade of coal, which in turn is based on the coal's gross calorific value, or the heat generated when the coal burns. The greater the heat generated, the higher the grade of coal, and the higher its price. We had to rely on the summaries of the coal blocks made public by the Coal Ministry, which only give a broad range of the grade of coal from grade A to G, which are older categories that do not reflect sharply the calorific value of the coal. More detailed information was available in dossiers for which companies had to pay Rs 5 lakh each.

With these assumptions, the notified price of the coal in 19 coal blocks in the unregulated sector was compared with the winning bid. 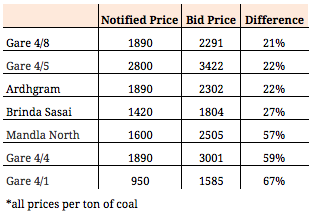 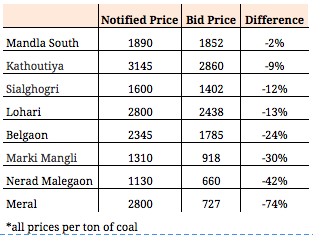 Offering an explanation for the low bids, the head of a coal mining company said: “Some of these blocks are hard to mine. They are smaller than the power sector blocks. The mining conditions are difficult. Some of these blocks, like Meral, are in Naxal areas. Any company which wants to mine there will have to pay levies to the local cadre.” Given the smaller size of the blocks, he added, cost of land acquisition and rehabilitation will be disproportionately high.

This view was challenged by Sudiep Shrivastava, a lawyer and activist who was one of the key litigants in the Supreme Court in the case that led to the cancellation of coal block allotments in 2014. “The low bids are surprising because these are blocks for which bulk of the land has already been acquired and mining is already underway or is about to begin,” he said.

While some divergence in the final bids is expected, given the unique characteristics of each coal block, the quantum of coal, the cost of mining, the bidding company's urgency to have a predictable coal supply, but what does such wide divergence say about "fair value" of coal?

When asked about this in a phone conversation, Bhardwaj disputed Scroll's findings. He said none of the winning bids were less than the notified price based on the government's calculations. He offered to look at Scroll's findings but did not get back when they were mailed to him.

During the bidding, Coal Secretary Anil Swaroop had tweeted the floor price and winning bids for each block. Later, the ministry collated and uploaded a document which showed the winning bids. But a document showing the floor price of the blocks has still not been made public. Scroll asked for a document but Bhardwaj did not provide one.

Defending the government's decision to withhold more detailed information about the grades and the estimated value of coal reserves in each block, making it available only to those who could pay, he said: “This is commercially useful information for companies. Why should I give it for free? These are national resources and we need to get the best value for them.”

Ironically, it is this lack of information – not to mention the cap on the number of bidders in the second round – which makes it impossible to assess whether the auctions generated fair value.

The second part will look at the viability of bids in the reverse auctions for the power sector.