Contribute Now
Ad
On April 29, Pooja Uthappa, a resident of central Bengaluru, left her home in the morning, like any other day, for her workplace at Sigma Technology Park in Whitefield. She took a bus and got off at the Varthur Kodi bus stop, next to Varthur Lake. The sight was striking. The entire lake was blanketed in a thick layer of snow white foam and the froth, over two feet high, was spilling onto the main road.

“Until then, I had seen froth within the lake,” said Uthappa, who is also a member of Whitefield Rising, a citizens’ group working on various civic issues, including lake protection. “This was the first time foam flowed out of Varthur Lake and spread on the road. We don’t know the reason for the spillover, but are extremely concerned about the water bodies in the city.”

Besides Varthur, two other lakes in the city – Bellandur and Yemalur – spat out foam that morning, shocking residents and passers-by. When the froth finally settled, the Karnataka Pollution Control Board and Bengaluru Water Supply and Sewerage Board got into a predictable blame game, while the Central Pollution Control Board sent in a team from Delhi on May 2 to collect water samples for testing and assess the foaming phenomenon. Its report is still awaited. 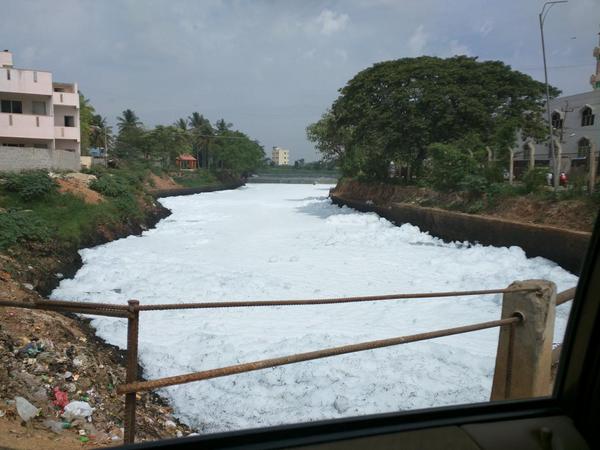 The foam, however, is not the real problem, clarifies S Vishwanath of the Bengaluru-based company Biome Environmental Solutions, which works on water sustainability solutions. “It is a symptom of the larger problem of untreated sewage and effluents flowing into the water bodies.”

Learning from other countries

Lakes and tanks are already fast disappearing in India’s Silicon Valley. According to the New Delhi-based Centre for Science and Environment, of the 207 tanks in the city in the 1970s, only 93 remained in 2010. At this rate, they will all be lost by 2020.

“Because untreated sewage and effluents flow into the lakes of Bengaluru, the ammonia and phosphate levels go up, and the dissolved oxygen comes down,” said Sushmita Sengupta, deputy programme director of the water team of the Centre for Science and Environment. “This leads to froth formation and causes harm to the aquatic ecosystem.”

Apart from the household sewage, Vishwanath blames the detergent industry for the foaming phenomenon. “The detergent industry is increasingly receiving hard water, which it softens by adding more and more phosphate,” he said. “Apart from phosphate, it also adds surfactants [surface active agents] and foaming agents to ensure easier cleaning of clothes. These surfactants and phosphate are getting into our lakes and causing froth formation.”

He notes that our traditional sewage treatment plants cannot handle the load of the growing detergent industry. Before a solution is found, Vishwanath says, it is crucial that the principle of extended producer responsibility be applied to the detergent industry, making it share information about the amount of phosphate and surfactants consumed by it.

Vishwanath is not off the mark. The detergent industry was implicated for causing high levels of foam in some European rivers, which led to the first set of regulations in Europe to control the types of surfactants used in detergents. Similarly, the US and Canada introduced regulations on the phosphate content in detergents in the 1970s when they found that phosphate was causing eutrophication of the Great Lakes. Eutrophication is when an environment becomes excessively enriched with nutrients, causing extreme aquatic plant growth, whose decomposition reduces the dissolved oxygen level in the water killing aquatic organisms.

Today, in most developed countries, phosphate-free detergents rule the market. However, in India, little is known about the constituents of detergents. Companies do not readily disclose this information and there are no regulations to control pollution from detergent use. The Bureau of Indian Standards has formulated standards for household laundry detergent powders (IS 4955:2001), but these are voluntary in nature.

If urban water bodies in Bengaluru are to be protected, say experts, more regulations on the detergent industry will be necessary. What will be needed too is decentralised sewage treatment. The second is something the Bengaluru Water Supply and Sewerage Board is implementing in a phased manner. To treat 1,100 million litres of sewage every day, 25 sewage treatment plants are proposed across Bengaluru, which should be complete by this year’s end.

Meanwhile, the Centre for Science and Environment is demanding better regulations for protection of urban water bodies and wetlands across India. To this effect, it has prepared a draft Legal, Institutional and Technical Framework for Lake/Wetland Protection in India. “The present Wetlands (Management and Conservation) Rules, 2010 lack legal teeth, and hence, remain unimplemented,” said Sengupta. “There is no role of local people in protection of wetlands and the only recourse is approaching the courts. The legal procedure sometimes takes a decade, by which time the lake is already dead. This happened with Badkal Lake in Faridabad, Haryana.”

The Karnataka government is not unaware of the poor state of the urban water bodies. On February 9, the legislative assembly passed a bill to create an authority for management of lakes in the state. The authority is empowered to remove encroachments, impose fines of Rs 10,000 to Rs 20,000, and imprison violators for three to five years.

But will this be enough to infuse life back into the dying lakes of Bengaluru? It remains to be seen.

Nidhi Jamwal is a Mumbai-based freelance journalist reporting on environment for 16 years. She tweets @JamwalNidhi.

Ganga’s lower stretches are in ‘poor’ or ‘very poor’ health across all seasons, shows a new study