Become a Member
Ad
Chinsurah, a town in Bengal’s Hooghly district, hides as much as it reveals its past. One place from where its rich history bashfully peeks out is the bungalow of the Commissioner of Burdwan. Above a staircase in the bungalow stands a logo with the letters VOC 1687. That VOC stands for the Vereenigde Oostindische Compagnie, more commonly known as the Dutch East India Company.

Between 17th and 19th centuries, Chinsurah was a prosperous trading post of the Dutch East India Company. “Dutch, Armenian and native Bengali merchants” lived there in this period, trading in “saltpetre, spices, cotton and indigo”. The Dutch trade reflected the larger commercial import of the Bay of Bengal. Along with the Dutch Chinsurah, there existed a string of European settlements along Hooghly’s west bank, bringing the region the sobriquet “Europe on the Ganges”.

A lot of this historical richness is captured in “Dutch in Chinsurah”, a cross-disciplinary project by Aishwarya Tipnis Architects in collaboration with the Presidency University Kolkata in which history, urban geography and architecture come together.

Project leader Aishwarya Tipnis says they have valorised about 95 structures of heritage value in Chinsurah and plotted them on real time Google maps by open source Geographic Information System mapping. This enabled them to bring together all sorts of information about these places “such as history, architectural description, and state of preservation in one place,” Tipnis wrote to Scroll.in. “Plus we also have links to other online sources archives in Netherlands, etc. that have old maps and images about these in one place.”

The project is funded by the Embassy of Kingdom of the Netherlands in India. “We hope this will become the starting point for urban planning and development of the town for the town,” said Tipnis. “We want to freeze Chinsurah in time or make it like Amsterdam or Jakarta. We want to keep intact what is special about its individual identity in all the development that happens in the future.”

What attracted the Dutch to Chinsurah? Hooghly’s landscape and its weather may have had a role to play. “It was a location perfect for pleasure gardens and mansions, with steps leading down to the river,” writes Tipnis on her website. “Dutch observers of the time termed these buildings ‘bangelaers’, or play houses, a word which likely derives from the place of origin: Bengal.”

Today, the Kolkata suburb remains a multi-cultural town that reflects the forgotten history of the Dutch in Chinsurah through an old cannon that stands in the middle of the Hooghly Madrasah. “The old gardens of the Dutch have now become playgrounds for children and meeting points for the elderly,” said Tipnis.

The famous Dutch Cemetery in Chinsurah has about 45 graves, the oldest one dating back to 1743. Another famous structure is the Tomb of Susanna Anna Marina, who is believed to have had seven husbands and also the inspiration behind Ruskin Bond’s famous novel Susanna’s Seven Husbands.

These photos show how the forgotten Dutch legacy lives on in Chinsurah today. 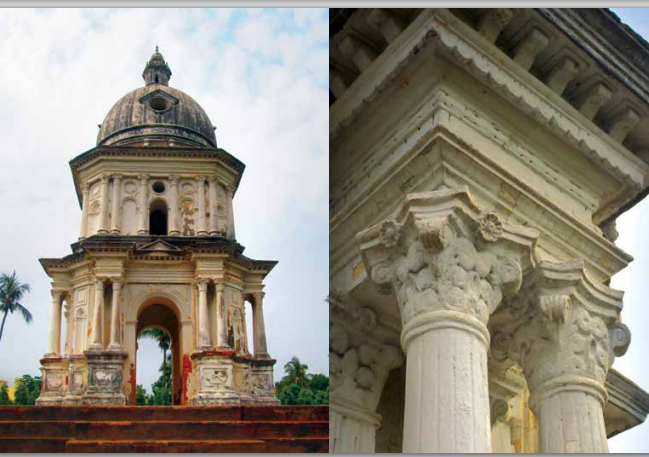 The Tomb of Susanna Anna Marina: Susanna (d. 1809) married twice: once the Dutch director of Bengal, and later, a well-to-do English businessman. The property on which the octagonal monument stands was used as a burial ground for English and Dutch residents. Surmounted by a dome with a steeple, the tomb is an exact replica of Tammerus Canter Visscher’s tomb in Cossimbazar. It bears an inscription in Dutch which includes a poem. (Courtesy: Aishwarya Tipnis Architects, dutchinchinsurah.com) 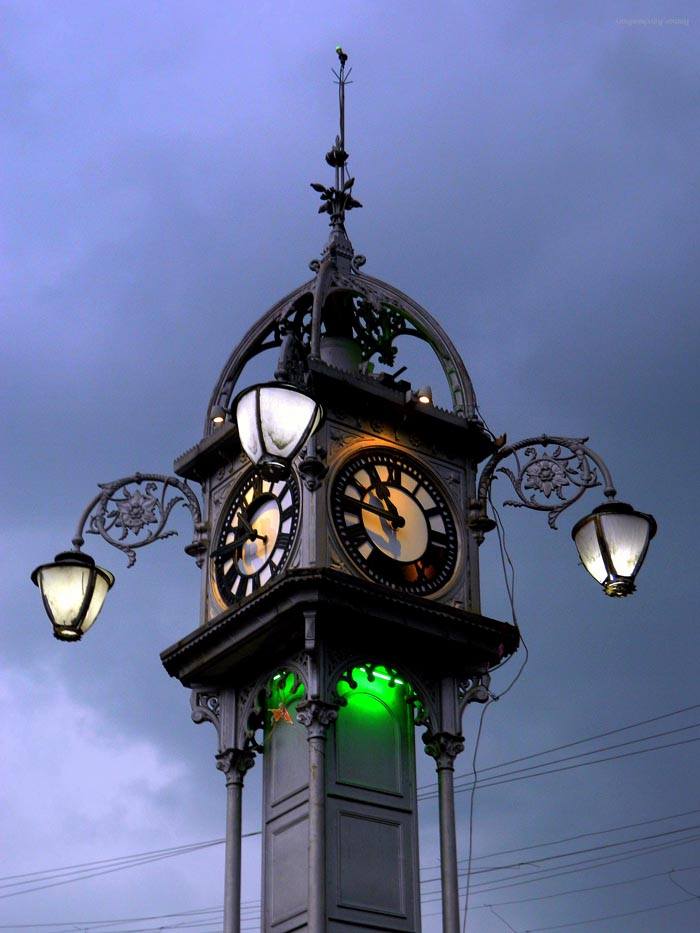 Ghorir More: This 19th century Gothic tower, imported by the British in memory of King Edward VI, is Chinsurah’s iconic landmark. Crafted in cast iron, its clock in working condition, Ghorir More, as it is popularly known, stands at the intersection of four important streets. The fact that this was an important nodal point even before the British advent in Chinsurah is apparent from 18th century Dutch maps of the town. (Courtesy: Aishwarya Tipnis Architects, dutchinchinsurah.com) 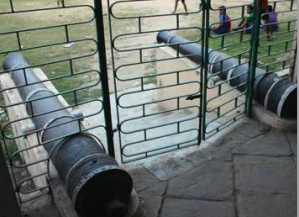 The only surviving feature of Fort Gustavus, the primary Dutch settlement at Chinsurah, is its artillery wall. Today it is part of the buildings of the Hooghly Madrasah, a 19th century construction raised on the remains of the fortification. Four Dutch cannons scattered on the site are resilient reminders of its bygone guardians. (Courtesy: Aishwarya Tipnis Architects, dutchinchinsurah.com) 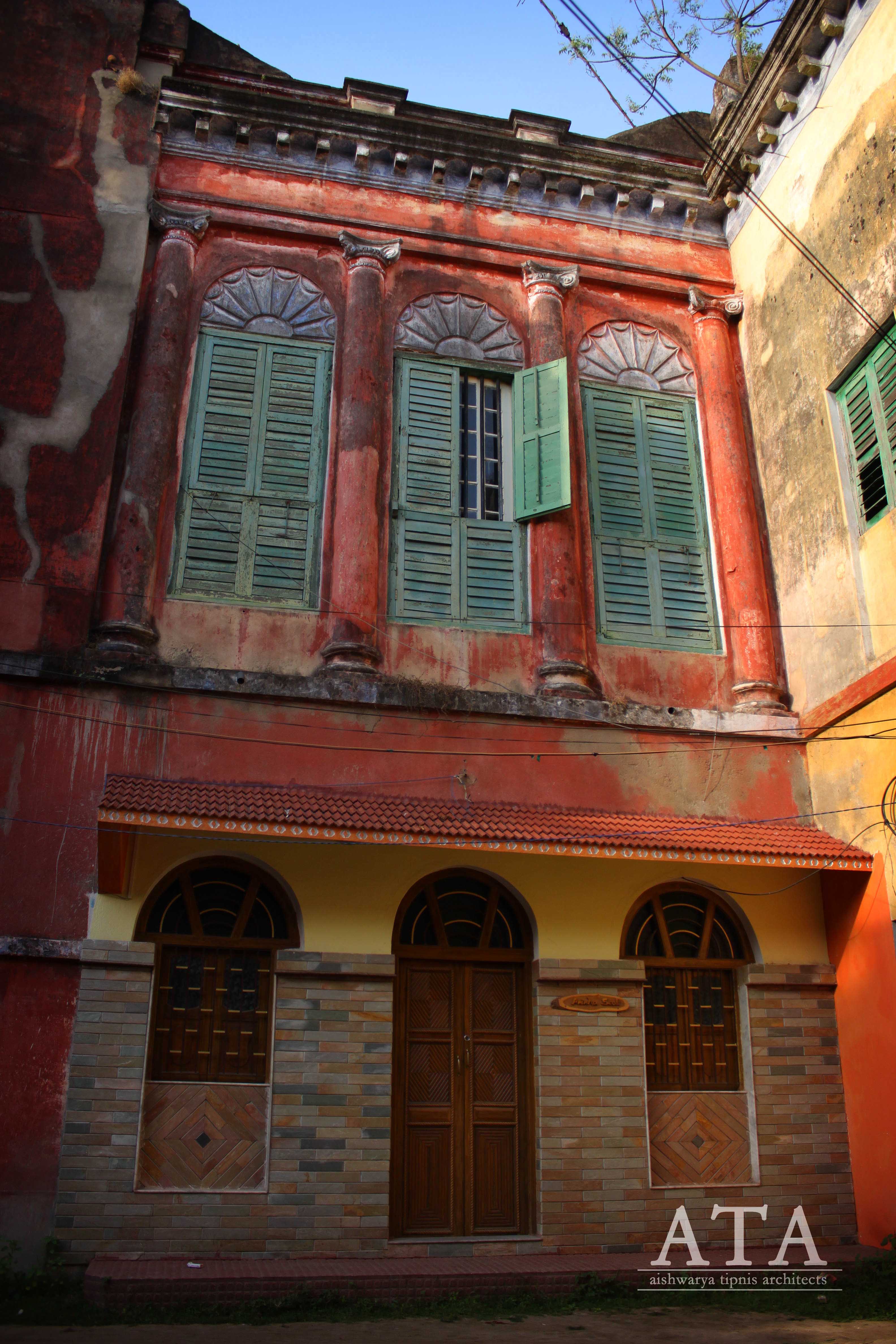 Bara Seal Bari: The once majestic mansion was built in 1763 by Nilambar Seal, another rich and influential merchant of Chinsurah. Designed in the Indo-Dutch style, the house is planned around multiple courtyards. Here too imposing Ionic columns hold up the verandahs, while thin fluted columns with Corinthian capitals support the arches of the thakurdalan. The projecting semi-circular balconies are embellished with decorative metal grilles, and some of the intricately carved timber panelled doors still exist.  (Courtesy: Aishwarya Tipnis Architects, dutchinchinsurah.com) 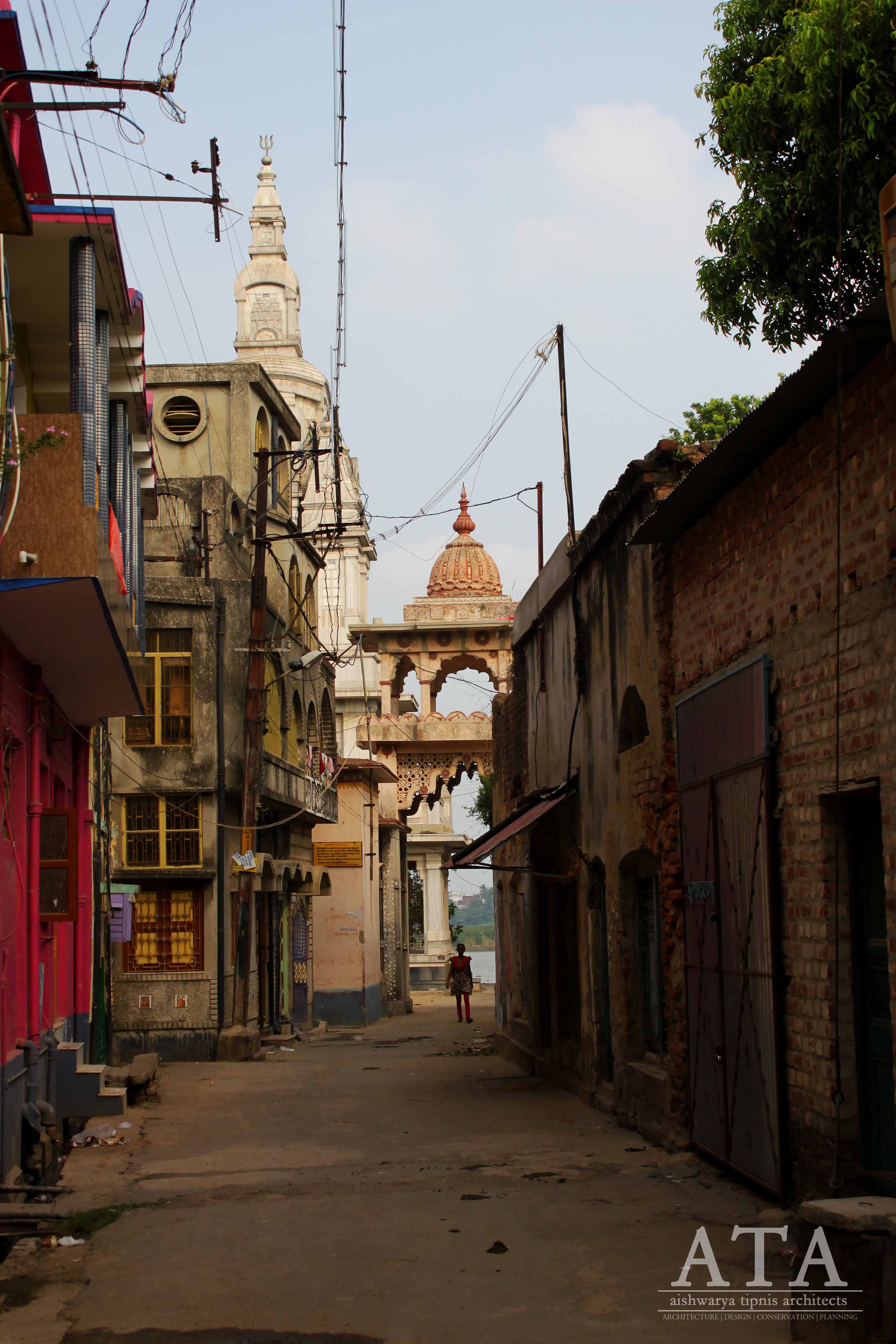 Shamdeshwar Temple: According to legend, almost 500 years ago, local fishermen rescued a representation of Shandeshwar (a form of Shiva) from the waters of the Ganga, and a local landlord created a temple for the deity. Daniel Overbeck, the last Dutch governor, gifted the shrine two brass drums, the sounds of which still reverberate during ceremonies. The temple ghat was established by Shyamram Shome, a high official of the VOC. (Courtesy: Aishwarya Tipnis Architects, dutchinchinsurah.com) 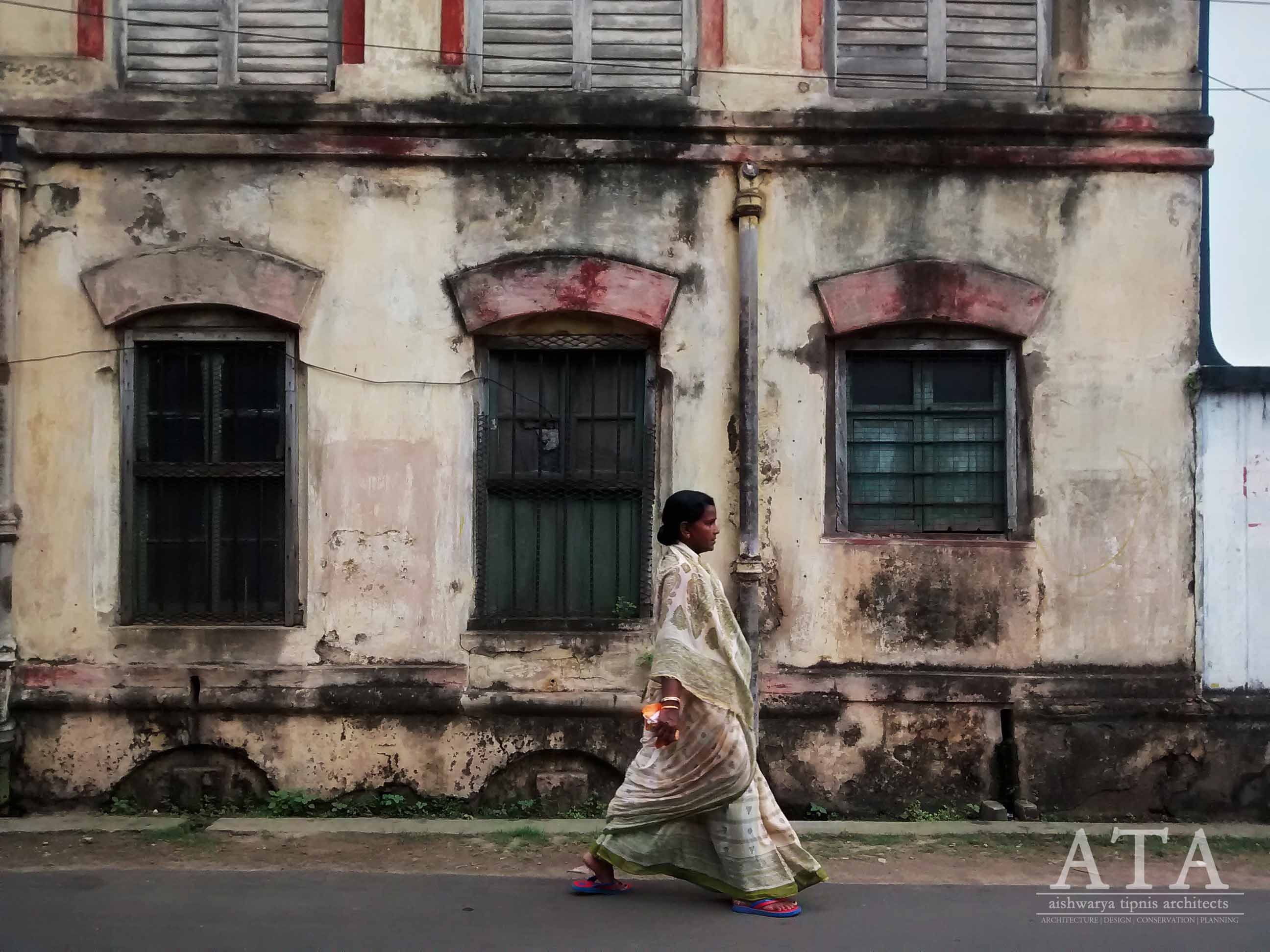 Mandal Bari, Kamarpara Balaram Lane: A large house built around a central courtyard, it belonged to one of the most important merchant families in Chinsurah. It is now the home of the Mandal family. (Courtesy: Aishwarya Tipnis Architects, dutchinchinsurah.com) 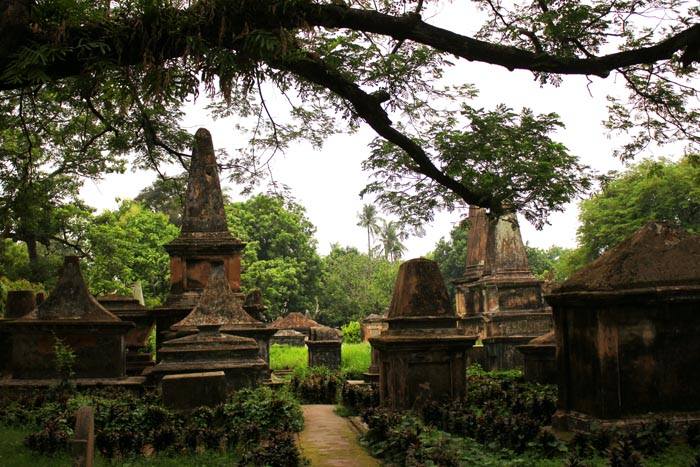 Dutch Cemetery: Built by Louis Taillefert, then director of the VOC in Bengal, the cemetery was active during the 18th–19th centuries, and houses about 45 graves of Dutch citizens who died between 1743 and 1846. The oldest tomb belongs to Sir Cornelius Jonge who died in Chinsurah in 1743. Other prominent people buried here are Daniel Overbeck, Gregorious Herklots, a high official in the VOC, and George Vernet, another VOC director. The latter’s tomb has no inscription. (Courtesy: Aishwarya Tipnis Architects, dutchinchinsurah.com)