Contribute Now
Ad
Much has been said about Prime Minister Narendra Modi’s meeting with his predecessor, Dr Manmohan Singh, recently. Given the Congress government's performance, it is not clear whether Modi received any economic lessons from Singh, but his cause would definitely have been served better had he spent some time discussing political and economic strategy with Tamil Nadu Chief Minister J Jayalalithaa.

Just looking at the public relations exercise launched by her in the recent days, it is clear that she would have been the right person to provide Modi with a new perspective on the achchhe din vs burre din debate that has seized the nation for weeks now.  She may even have told Modi bluntly what the good doctor would have refrained from saying – that getting a good conduct certificate from the economic reforms lobby should not be interpreted as a thumbs up from the people.

As things stand, we have been witnessing endless discussions in the media on whether India has indeed forged ahead now that Modi has completed one year in office. The Bharatiya Janata Party leaders and spokespersons have been rushing and gushing from one TV studio to the other, proclaiming that the worst of the bad times caused by the previous Congress government have miraculously evaporated. That, they reiterate, is the most significant achievement of the Modi government. But, pray, where are the good times that were promised?  Give us some time, they are coming, they are coming, they say without much conviction.

On prime time, we were told by pushy BJP leaders that under Modiji’s command, Indian economy was growing by an impressive 7.4%, when China’s rate of growth was only 7.3%. What was left unsaid was that India's improved growth rate was thanks to a new method of calculating the Gross Domestic Product. And also that a slowdown in manufacturing, sales, exports and a dip in bank credit growth did not quite substantiate the impressive 7.4% figure. There was also much celebration of foreign exchange reserves and industrial production going up, and of fiscal measures like downsizing welfare schemes which cut deficits, as well as India’s improved status and image in the international community. As Modi himself said on one of his recent tours abroad, we can now be proud to be born Indians.

But in Chennai – some 1,700 kms south of Delhi as the Boeing or any other bird flies – the good times seem to be back when  Jayalalitha, also known as Amma (mother) to her followers, was sworn in for the fifth time as chief minister of Tamil Nadu on May 23. There was rapturous dancing on the streets as All India Anna Dravida Munnetra Kazhagam supporters celebrated the return of the Puratchi Thalaivi (revolutionary leader), who was forced to give up her chief ministership in September last year following a Karnataka court conviction on corruption charges. She was acquitted earlier this month by the High Court, paving the way for her return. The message she sent out immediately after she resumed office was her commitment to people friendly schemes and policies.  In sharp contrast, the objective of the recent PR exercise unleashed by the Bharatiya Janata Party government was to showcase Modi and his economic reforms mantra .

The Tamil Nadu government has been looking at its achievements through sharply different bifocals. It has proudly announced its achievements as: providing 20 kgs of free rice to 1.69 crore families every month, 35 kgs of the grain per month to Antyodaya Anna Yojana cardholders, free distribution of 22 lakh goats and sheep and distribution of free geometry boxes (65 lakh sets), uniforms, footwear and  text books to students. Add to these acts of “fiscal indiscipline” 298 subsidised Amma eateries, fair price medical stores, Amma economy cement, value added salt,  insurance schemes, free health care, assistance to the disabled and what have you. The freebies cited extended across the spectrum – from agriculture, tribal welfare and medical care to marriage gifts in the form of four grams of gold and aid upto Rs 50,000 to poor girls. 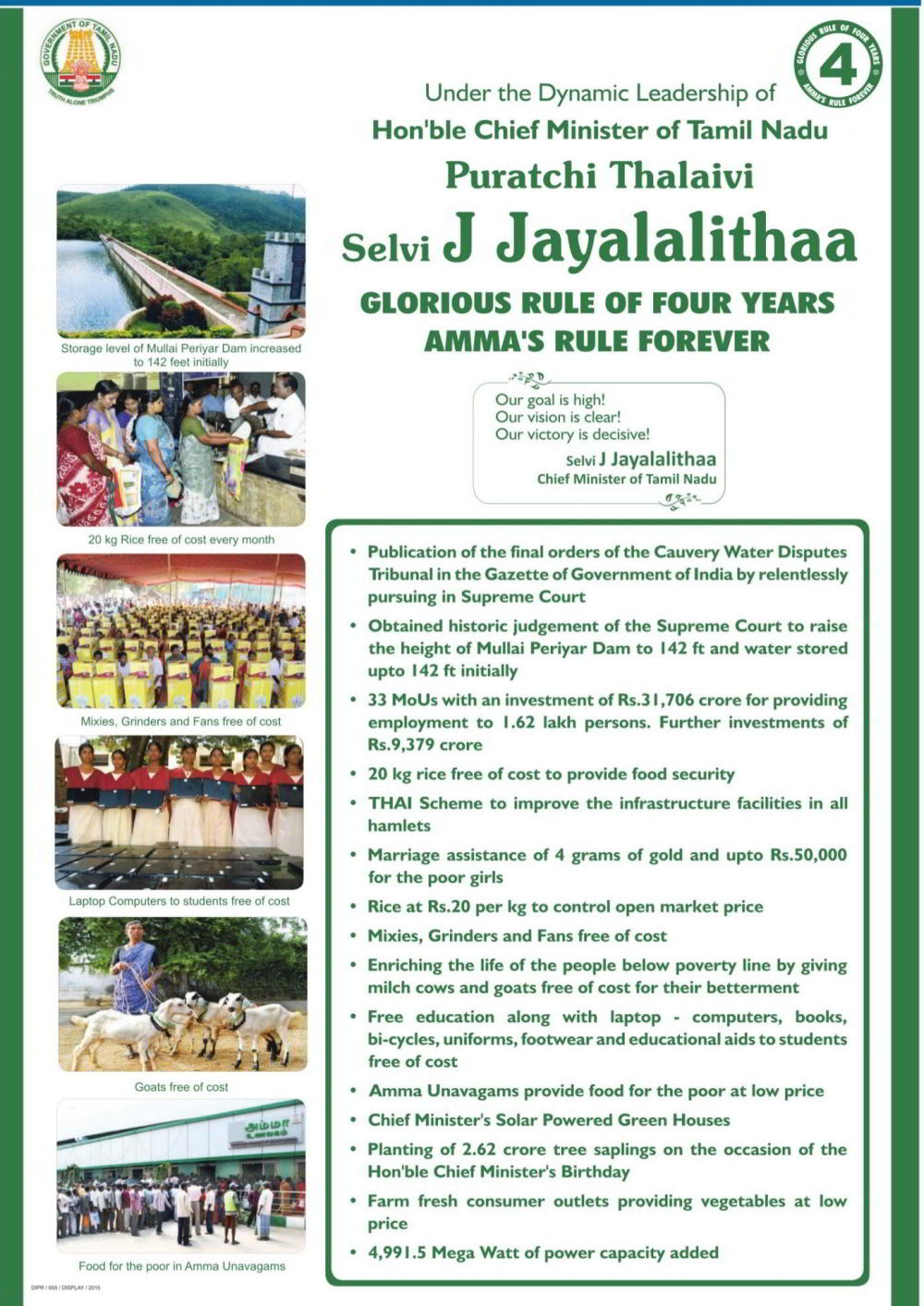 Of course, there is no available audit to ascertain whether the sops reached the right people. But if one were to go by the state government hype, Tamil Nadu would qualify as an ideal welfare state which would do any socialist proud. But is that the complete profile of the southern state? By all accounts, Tamil Nadu is also highly industrialised and is the preferred destination of several multinationals as well as Indian companies. It boasts of over 100 industrial parks. Single-window clearance has been given to as many as 42 industrial units since 2011.  The state has attracted Rs 31, 706 crore investment in recent years. In fact, Tamil Nadu is the second largest economy in the country next to Maharashtra. But all this strangely finds scant mention in the state’s Public Relations drive. Jayalalitha, one would presume, would rather be photographed distributing free sewing machines and mixies to disadvantaged women than be seen in the company of industry captains.

According to insiders, ever since she came to power after winning the 2011 assembly elections, Jayalalitha has realised that it pays to wear populism on one’s sleeve. The people who vote for her must be explicitly told that they are being looked after. There is nothing to be gained by bandying GDP figures and abstract numbers before common folk about industrial growth. They will be more impressed if livelihood issues are seen to be addressed. Jayalalitha  has therefore thrown out fiscal discipline warnings through the window and gone ahead with her welfare schemes. The subsidised canteens she opened throughout the state last year came in for much criticism from the economists as a drain on the exchequer. But they are today one of her most popular trump cards.

In fact, there is one school of thought that the Chief Minister quite revels in criticism of her schemes. It is said that it only bolsters her image as a leader who will work for the people at whatever cost. Many would say she is only replicating her mentor and former Chief Minister MG Ramachandran’s formula of carrying his screen image of a do-gooder into politics. But Jayalalitha has added a new dimension by emerging as a leader who rarely makes public appearances but is nevertheless caring – much like the benevolent, yet strong willed mother/goddess figure of Tamil cinema.

As for attracting big business, the logic is that thousands of crores is never invested merely on the strength of media hype. Risk management assessment and business climate reports are sought from consultants, experts weigh the pros and cons carefully before any decision is taken. So, making loud proclamations about inking business deals and charting industrial growth through popular media does nothing more than spread the feel good factor among a limited section of the population.

In 1991 when she first became chief minister, Jayalalitha was not quite the same person she is today. Her “overall arrogance” was visible in her conduct and the PR unleashed projected her as one who rubbed shoulders with big business. The right wing applauded her. True, Jayalalitha was even then the mother figure for her cadres but a mother who had also become an empress – a not so benevolent dictator given to pomp and splendour rather than the care of her "subjects".

Today, Jayalalitha is on a different flight path from other politicians who like to project themselves as champions of liberalisation.  The BJP government under Modi seems keen to present itself as pro-reforms. As a result, one hears more about trade agreements, smart cities and, land acquisition. Also budgetary cuts to education, tribal welfare and whittling down the numbers covered by rural employment guarantee schemes are projected as laudatory acts of fiscal discipline. It’s Shining India redux.

But in Jayalalitha’s PR book, populism gets first preference. Liberalisation is nothing to trumpet about – after all the so called trickle-down effect of economic reforms is too slow a process, if it even happens, to make any sense for either a practising politician or the voter. Welfare currently seems to be Amma’s mantra to fare well in the assembly polls due next year.  Is there a message in this for Modi?