Contribute Now
Ad
Tomorrow is Siddhant’s first birthday. Given the choice, his mother, Bhavna, would be home, cooking up a feast for the family, but in the tiny Nutritional Rehabilitation Centre at Guru Gobind Singh Hospital in West Delhi, crammed on a bed with another mother and child, there isn’t much she can do to make the mood festive.

After months of severe diarrhea, Siddhant was admitted to the hospital last week. Diarrhea and pneumonia are the two biggest killers of children under five. But underlying both the conditions often is severe acute malnutrition, which leads to stunting, wasting and in some cases, death.

Pale and irritable, Siddhant can neither crawl or walk. He weighed six kilos when he came to the hospital. He has reduced further to 5.8 kilos since then because of the severity of his stools. It took the doctors a full week to shift him to the Nutritional Rehabilitation Centre, which is a special ward for severely malnourished children.

Delhi has 11 such centres. Only five are functional. The centre at Guru Gobind Hospital has three beds. Bhavna is the fifth mother with her child sharing one of the three beds.

“Summers bring SAM [severe acute malnutrition] children into our hospital in hordes,” says Krishna Bhattacharya, a dietician at the centre. From an average of five children, the number of cases swells up to 20-22 children. Running out of space, the hospital packs them into the normal paediatric ward with sick children, which puts them at risk of contracting more infections.

The state of the Nutritional Rehabilitation Centres

According to the health ministry’s guidelines, a nutritional rehabilitation centre should have a covered area of about 1,950 square feet to house ten beds, a play area with toys and audiovisual equipment, a nursing station, kitchen and food storage area attached to the ward, and two bathrooms and toilets. In reality, the 200 square feet centre at the Guru Gobind Singh Hospital has three beds and a tiny little platform on which all five mothers have messily piled their belongings.

At lunch time, food is wheeled in a trolley outside the room. The mothers stand in a queue filling their plates with dal, sabzi, rotis, rice, bland khichri, bananas and packaged yoghurt. What about food for the babies? “We all get the same food,” says 35-year-old Radha, placing her tray carefully away from her one and half year old son, Golu, who is waking up from sleep.

Golu had been suffering diarrhea in repeated bouts for over six months and has spent nearly a month at the centre, taking drips. His mother tries feeding him khichri with yoghurt, but he turns his face away. The mothers say, forget baby food, they are not even allowed to ask for extra salt or sugar. “The staff would ask us to go home and bring it,” said Radha. And yet the hospital has one of the better run nutritional rehabilitation centres in the city and mothers are taught to be grateful.

It all begins in the womb

At the Sanjay Gandhi Memorial Hospital in North West Delhi, the nutritional rehabilitation centre is a tiny glass walled room with two dusty looking beds. It was locked the day I visited. The ward attendant claimed not to know when the room was last used.

On the ground floor, the ward for premature babies echoed with the constant beeps of the heart monitoring devices, interspersed with squeaky whimpers that sounded like coming from new born mice. The ward, with a capacity for 14 babies, was packed, with some incubators shared by two palm sized babies. Those weighing less than one kilo have the poorest chances of survival.

Dr Sohrab Alam, a senior resident doctor, introduced me to "Rekha's baby" (many babies have not been named since parents are unsure if they will survive). Born premature, she weighed just 0.97 kilo.

Half the babies who get discharged come back because they are unable to sustain the weight gain. Alam’s advice to the mothers is to exclusively breastfeed their babies for the first six months. But saddled with too many responsibilities and children, mothers are unable to breastfeed with the tenacity required during the initial months. Often the mothers are anaemic and undernourished themselves. "You can say malnutrition begins from here,” said Alam.

Fixing the first point of detection

“What we should strive for is a way to prevent malnutrition much before a child slips into a severe acute malnutrition category and needs an nutritional rehabilitation centre,” said Dipa Sinha of the Right to Food Campaign.

For this, in 1975, the government introduced the Integrated Child Development Services, better known as the anganwadi scheme which aimed to improve the nutritional and health status of children below six and pregnant mothers. The anganwadis are meant to provide supplementary nutrition, immunization, health check-ups and referrals, and pre-school education. But most anganwadis in Delhi’s slum areas have been reduced to food distribution centres.

It is noon within the narrow alleys of the Nayi Seemapuri Jhuggi in East Delhi. Inside a dark 100 square feet room, Poonam Pandey sits on a chair and 20 children sit at her feet, elbow to elbow, knee to knee, some kids even on the large wall-to-wall bed that the owner has left in a corner of the room, swallowing the floor space further.

Pandey is the anganwadi worker for one of the 12 anganwadis in the slum, some of which are the size of a 30 square feet toilet. Anganwadi spaces in Delhi are shrinking as rents soar. The monthly anganwadi rent budget is Rs 750 per month, which isn't enough for anything but a tiny room. Often, a portion of it is used by owners to store their belongings or a common area like the verandah is leased out to others.

Anganwadis have long been stressing on the need for more financial support to provide larger spaces for children and better salaries to motivate anganwadi workers, who act as the first step to detecting malnutrition. The workers get paid Rs 5,000 a month while helpers get Rs 2,500, despite the skyrocketing costs of essential commodities.

But instead of increasing budgetary support, the central government has halved the allocation for the Integrated Child Development Services from Rs 18,195 crore last year to just Rs 8,335.77 crore this year. It has placed the onus on the states to make up for the shortfall, which threatens to disrupt the scheme in some states at least.

In Delhi, the budget cuts have derailed the plans to restructure the anganwadi into a day care crèche. "Mothers need a safe place to leave their children behind when they get back to work after child birth,” said Sinha.

It was this understanding that led to the setting up of the non-profit initiative called Mobile Creches in 1969. It caters to the children of migrant construction workers, reaching out to 14,000 children through 650 day care centres, partnering with 300 builders at Delhi’s various construction sites. The children find comfort in home cooked meals, learning through fun games and the genuine warmth and care of the staff. 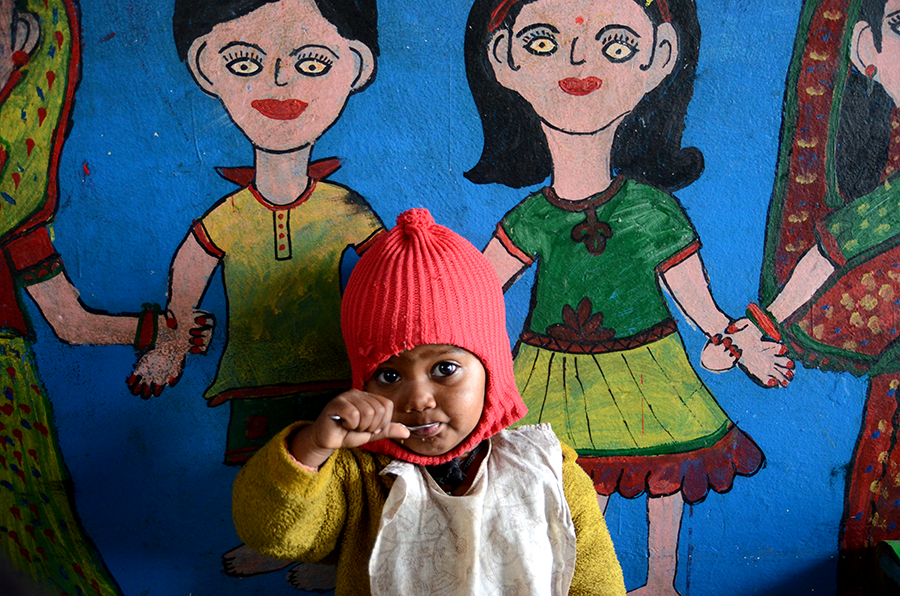 A mobile creche in Gurgaon.

A centre that Scroll visited in Gurgaon was ringing with laughter and cheer. The children were well fed. Swaddled in a large blanket, the small ones were being patted to sleep. The mothers came back from work at various times to collect their little ones. The system was based on trust, understanding and deep empathy for the concerns of these working parents, all of which the State could learn to feel.

This is the concluding part in a series on the crisis of hunger in Delhi. The other stories can be read here.

Shriya Mohan is a media fellow of the National Foundation for India and Save the Children and is researching urban malnutrition in New Delhi.