Contribute Now
Ad
Delhi feels like a furnace right now. The capital has experienced temperatures of up to 45 degrees, which meant that Delhi has even been hotter than the desert state of Rajasthan. Across the city, hospitals are getting filled with patients hit by sunstroke and in some cases delirium. And since any phenomenon these days can become legitimate only if it's been recorded on social media,  Delhi's heat wave has even had its own viral moment: melting roads.

Watch: This road in Delhi melted due to scorching heat http://t.co/loRaAPTxTF pic.twitter.com/9oaJ3lCUQ3

It's being called Salvador Delhi, a mark of recognition that the ground beneath the capital is melting like a surreal painting.

This photo, taken on the street outside Safdarjung Hospital, appeared in the Hindustan Times on Tuesday, became the perfect symbol of the summer swelter. It was was quickly relayed far and wide by social media users and eventually made its way to outlets like the New York Times and Slate with headlines featuring words like "apocalyptic".

But step onto any ordinary street in the capital and you're not exactly putting your foot in some sort of road lava. So are roads really melting in the capital (and is that a bad thing)?

Delhi has 1,200 km of roads, according to the Public Works Department, most of which are topped with bitumen. the standard road-building material.  These roads can often become very hot. "The road temperature is usually higher than air temperature because the road absorbs the heat and also because it is a black surface," said SC Jindal, the chief general manager, technical, at the National Highways Authority of India. "If the air temperature is 45 degrees, the road could be up to 3-4 degrees more. It could even go up to 50."

And when bitumen gets hot, it melts. "In testing conditions, at 60 degrees, the bitumen in the road turns soft and, under traffic pressure, the bitumen could come on top, a process that is called bleeding," Jindal explained. "Under actual conditions, some deformation is possible at 50 degrees."

So are Delhi's roads actually melting? It isn't as if hasn't happened before: that's what appears to be happening in this video shot in the capital last year.

What's unclear is whether this process has repeated itself at the Safdarjung Hospital spot over the last few days. People who live and frequent the area are not so sure. It's easier to see that the road has been deformed because of the distortion apparent on the horizontal lines, intended to warn motorists coming off the flyover to slow down. The lines are all curly while the bitumen seems to have congealed into a bump in the middle of the road.

But Munna Singh, a security guard who works in the colony next to the spot, said that the lines have looked like that for a while. "You can't trust the roads here, in general, but those lines haven't been straight for a long time now," he said. "It hasn't happened in the last few days." 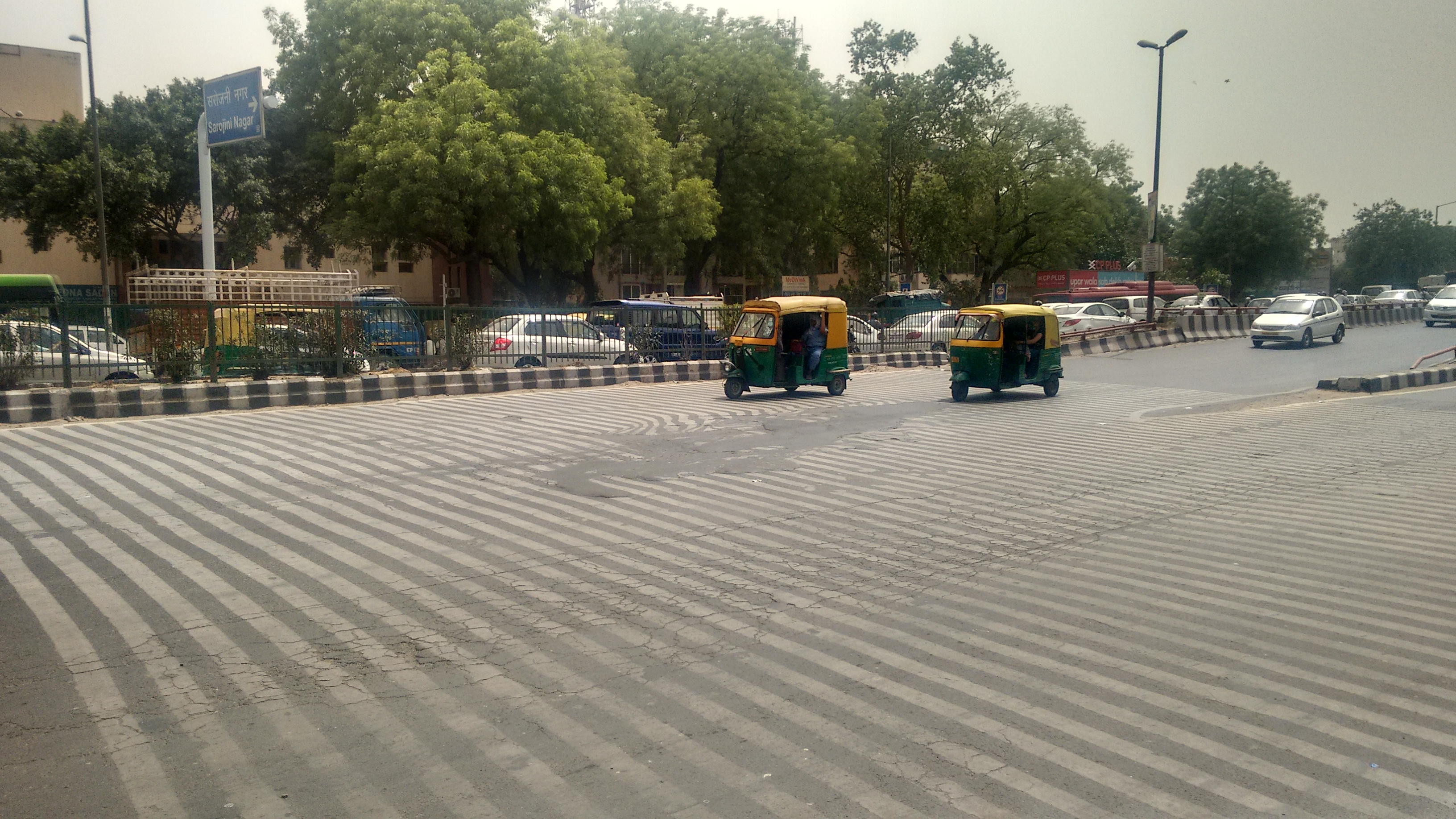 Indeed, if it weren't for the lines, the road wouldn't look all that different from most other streets in the capital, where the surface isn't exactly level.

Rafiq, an auto driver who operates in the area, has another theory for why this has happened. "The heat forces me to wear my turban, but it's not so hot that the road would boil," Rafiq said. "I think it is because at night heavy trucks come up the flyover, and then they hit the brakes right before getting to the bottom. That must have caused this."

Are melting roads a problem?

Divakar Agrawal, Superintending Engineer at Delhi's Public Works Department, wasn't unduly perturbed by the phenomenon. "If there is too much bitumen sometimes, it can melt and flow like this, but it's not really an issue," he said. "There is no khadda [pothole]."

Agrawal maintained that, across the 1,200 km of Delhi's roads, if this was happening in just one or two areas, it's not a problem. In fact, he even argued that it could actually be beneficial. "Heat is very good for our roads," he said. "The bitumen melts and flows, and usually it does that into cracks, so what happens is that the cracks get sealed."

Jindal, too, said that it is a positive indicator. "If a road is melting in Delhi, it is a sign that there is enough bitumen in it."