Become a Member
Ad
You must have heard the figures by now or seen the graphs. As the probe into corruption in football's governing authority Fédération Internationale de Football Association, or FIFA as it is widely known, continues, we are constantly reminded about the all-too human toll of this graft: labourers dying in Qatar, which was awarded the 2022 edition of the World Cup. More than 1,200 labourers have already been killed because of Qatar's World Cup and up to 4,000 are expected to die before 2022 itself – a figure that one outlet reminded people was more than the casualties of the September 11 attacks.

Shocking, no? Especially when compared to the number of fatalities from the Brazil World Cup, which was a total of just 7 workers. There's just one problem: it's not true.

Qatar's human rights record is far from stellar and the country continues to have one of the most regressive policies towards expatriate labour, often compared to slavery, but the 1,200 and 4,000 casualty figures have been put together in such a shoddy manner as to make them worthless.

The numbers seem to have become canonical in news copy the world over, being parroted out by any publication writing about Qatar's World Cup and its human rights records, but few have given a closer look to how exactly those figures were put together.

Both come from a report by the International Trade Union Confederation, the world's largest trade union federation. In a report titled "The Case Against Qatar," the ITUC in 2014 argued that Qatar is a "country without a conscience" and a nation without any labour policy compliance. "Poor migrant workers living in squalor, are forced to work long hours in unbelievable heat, six days a week. Kept in an apartheid situation, they are dying in unprecedented numbers," the report says.

The Nepal foreign ministry in particular has spoken out about the figures it has collected, saying that many of its citizens' deaths were caused by things like "unnatural" heart attacks. The Nepal embassy in Doha specifically said these deaths were of "migrant Nepal workers," which is the vast majority of Nepalis in the country, the rest being spouses and children.

The numbers of Indians put into this report are even more imprecise: it covers all Indian citizens who died in Qatar between 2010 and 2014. More than 500,000 Indians live in the country. ITUC's report covers all the Indians who have died in Qatar over that period, according to the embassy's figures.

Outsiders in the country might not realise this, but not all the Indians or Nepalis who travel to Qatar are labourers working on construction sites. The country has a well-developed middle-class full of South Asian migrants whose jobs have little to do with the World Cup, and this includes families, with children and elderly parents. Despite this, ITUC seems to have presumed that any Indian who dies in Qatar has lost his or her life because of the World Cup.

Just to break that down further, the death of 800 over the four years for a population of around 5 lakh means the Indian community in the country has a death rate of 0.4 deaths per 1000 Indians. Compare that to India's national death rate of 7.4 deaths per 1,000 people and you can see why this calculation is flawed. Qatar's own death rate is listed at around 1 per 1,000, more than the death rate of Indians according to the ITUC report.

This figure becomes even more galling when you look at ITUC's decision to compare Qatar's worker deaths with those from other countries that have held sporting events in recent years. Take this Washington Post graphic, based on the ITUC report. 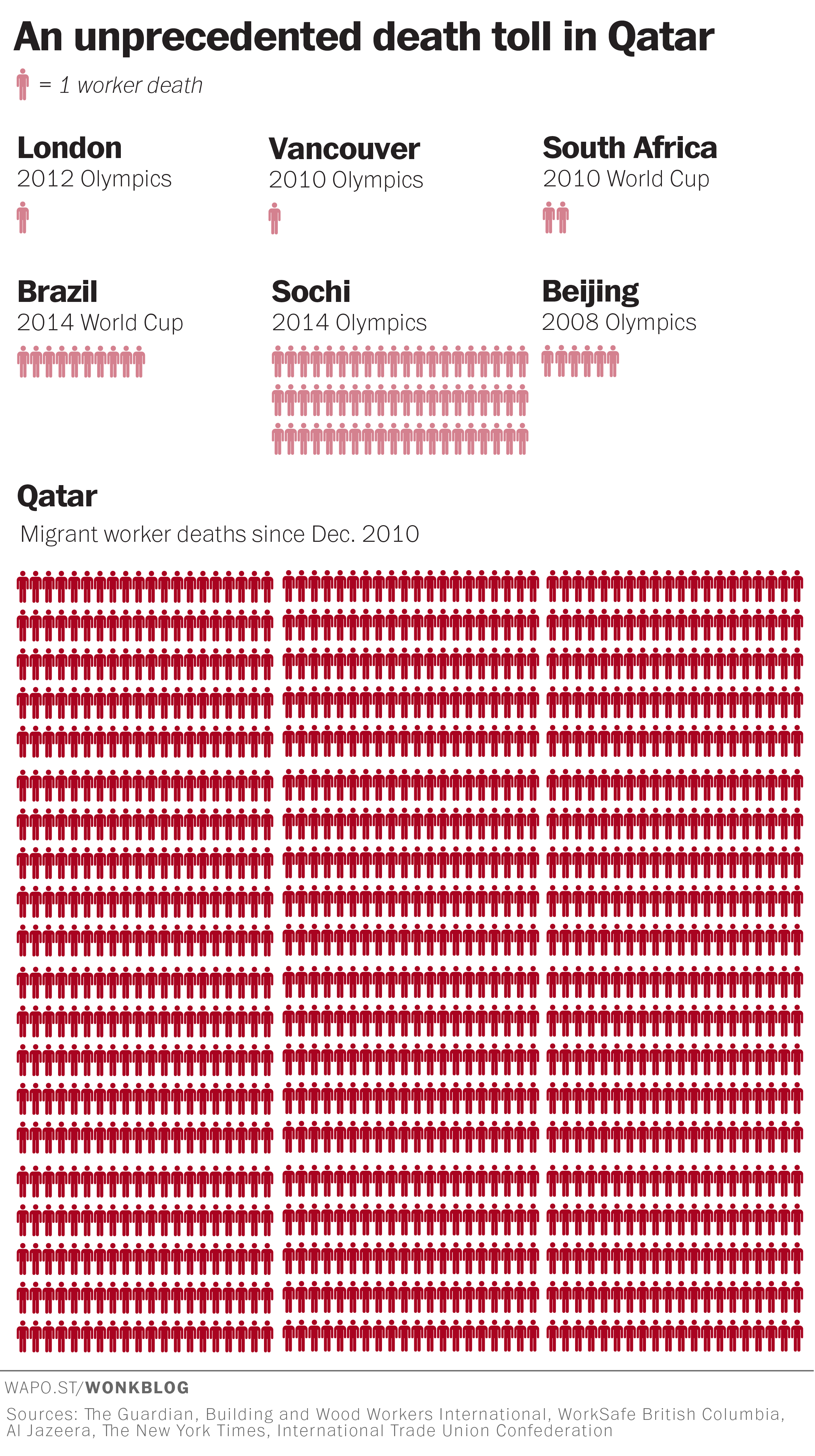 What makes it worse is that the paper's blog post acknowledges that its figures are flawed:

...Hundreds of thousands of migrant workers come to Qatar each year, and there could be hundreds of deaths even without a World Cup ‒ figures from the Indian embassy show, for instance, that 200+ Indian workers died in Qatar in 2010, before the World Cup announcement....

....the Qatar estimates include the deaths of all migrant workers after the announcement of Qatar's successful bid in 2010, while other countries' figures may only include deaths directly related to, say, stadium construction

And yet the paper retains the graphic.

The problem is essentially that ITUC is not using its same catch-all approach to figures in Qatar as it does to the other events like the Brazil World Cup, where it counts only seven fatalities.

Assuming Brazilians were mainly involved in building World Cup venues in Brazil, the equivalent figure would be 12,00,000 – the total number of Brazilians who died in the country that year. That number is patently ridiculous, but it uses the same assumption that ITUC makes about Indians in Qatar.

None of this is to say Qatar has an upstanding reputation or takes care of its workers. It doesn't. The kafala system, which is akin to slavery, is one of the world's most regressive and there is little transparency in how labour companies work, how injuries are dealt with and what conditions are maintained. But to attempt to deal with it through imprecise arguments and exaggerated figures is no way to go about addressing the issue.