Contribute Now
Ad
It has been 200 years since the death of James Gillray, the artist widely regarded as the father of the modern political cartoon. It’s an anniversary we ought to celebrate.

In a career that spanned 30 years, from the 1780s to the early 1800s, Gillray produced political cartoons of unprecedented draughtsmanship and satirical verve. To spend time with these images – and I encourage you all to get to the Ashmolean Museum’s current Gillray exhibition – is to immerse oneself in a world of twisted fantasies and waking nightmares.

Gillray’s imagination is scatological, cynical, and outrageously irreverent. It pushes at extremes, not just visually but conceptually, and seems often to teeter on the cusp of madness (history has its own grim sense of humour and Gillray, like King George III who he so often excoriated, spent his final years in the depths of insanity). Looking at Gillray’s caricatures the difference between light and dark is sometimes hard to see. They discomfort us at least as much as they amuse.

Given the many hundreds of cartoons he created and the astonishing range of his visual (and textual) invention, it’s almost impossible to distil Gillray’s achievements. But here are five reasons to raise a glass to his memory.

1. An enduring image of megalomania

Martin Rowson, in his own recent tribute to Gillray, rightly describes The Plumb-Pudding in Danger (1805) as “the greatest political cartoon ever”.

It’s certainly the most quoted and adapted by subsequent visual satirists. Gillray shows Napoleon and the British prime minister Pitt the Younger tucking into the world, cutting off thick continental slices with evident relish.

It’s an image that reduces the complexities of global warfare to a single, suppertime drama, and in doing so it perfectly expresses the pitilessness and absurdity of it all. This isn’t anti-Napoleonic satire. Gillray chides a power hunger that is as much Britain’s and France’s. 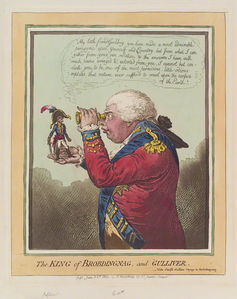 Visual satirists shape the way we see the political world. This is true now (thanks to Steve Bell, how many of us think of David Cameron as a large, pink condom?) and was still more the case in an age before photography.

Contrary to the popular myth, Napoleon wasn’t all that short. At about 5ft 6in, he was of average height for the age. In fact, as the British Museum’s current “Bonaparte and the British” exhibition reminds us, we owe this image of “Little Boney” to Gillray. From 1803 onwards, he delighted in depicting Napoleon as a tiny braggart dwarfed by his British adversaries. The image stuck. 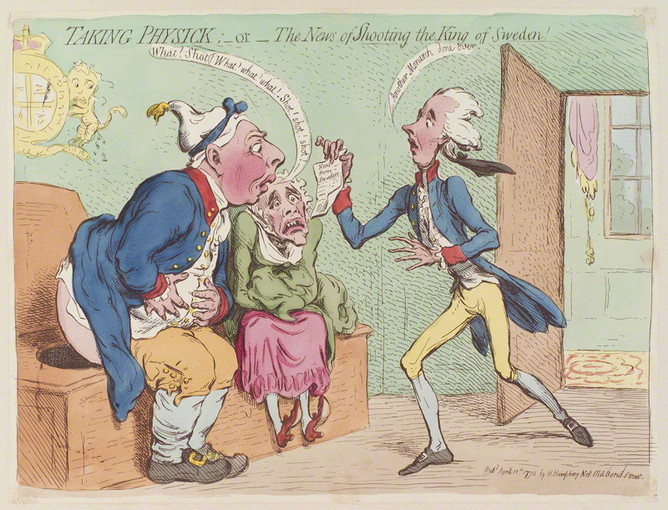 Like other satirists of the 18th century, Gillray’s imagination was vividly excremental. But the bowel movements of a reigning monarch were pretty much taboo in visual satire until Gillray’s Taking Physick (1792), which shows Pitt the Younger bursting in upon George III and his consort, Queen Charlotte, as they squat on their latrine.

Pitt brings with him confirmation that the King of Sweden has been assassinated, news that has a laxative effect on the terrified George III. Two centuries on, imagine the uproar were Elizabeth II to be depicted in the same manner. 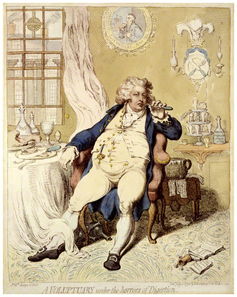 Forget the black spider memos. The current Prince of Wales has nothing on his Georgian counterpart. George III’s eldest son was a notorious profligate and in A Voluptuary under the Horrors of Digestion (1792) Gillray captured his dissoluteness with acid precision. Surrounded by empty wine bottles, the leftovers of a huge meal and various symbols of his debts and promiscuity, the Prince slumps languidly in an armchair, holding a fork to his mouth. He looks out at the viewer with an arrogant indifference, while the buttons of his breeches and waistcoat buckle under the pressure of his distended paunch.

The image would haunt George once he came to the throne, with fellow cartoonist George Cruikshank adapting it in 1820.

5. Jokes about national cuisine
Eating, like excreting, is one of the staple metaphors of Gillray’s work. The tradition of ridiculing the French for their strange diet goes back long before Gillray, but his cartoons did offer a new and more disturbing take on this joke. 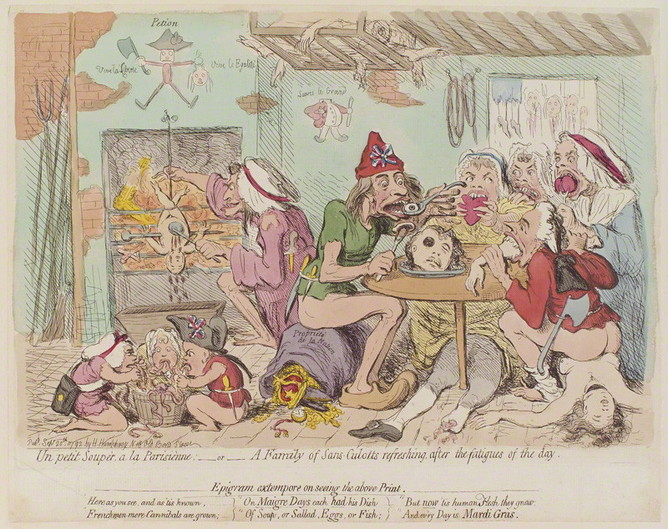 In the wake of the September Massacre in Paris in 1792, Gillray’s Un Petit Souper depicted the French sansculottes (revolutionaries) as cannibals who gleefully gorge themselves on human body parts. 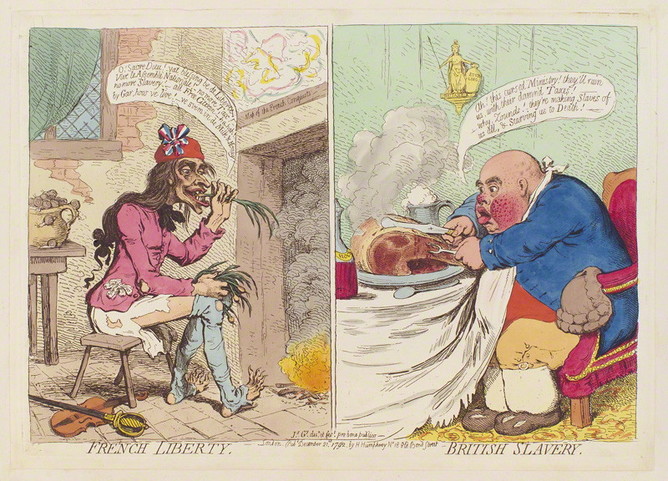 Two months later, in French Liberty. British Slavery, Gillray again mocked French eating habits. In the left half of this image a sansculotte munches on a raw onion, while in the right half, by contrast, a corpulent, red-faced Brit eagerly tucks into a disgustingly large joint of beef. Gillray’s title is, of course, ironic. As is so often the case in his cartoons, no one comes out well here.