Become a Member
Ad
It’s easy for an Indian prime minister to be a bit patronising about Bangladesh. After all, it’s a small country whose birth as a modern nation was midwifed by India itself. It’s also quite poor: India’s gross domestic product is more than 10 times larger and its per capita income double that of Bangladesh. So it didn't really come as a suprise that Narendra Modi played the part of the puffed-up big brother on his recent Dhaka visit, patting Bangladeshi Prime Minister Sheikh Hasina for doing a good job “despite being a woman”.

Unfortunately, Modi chose the wrong topic to be patronising about: far from being some sort of hell hole for women, in the words of the World Bank, “Bangladesh stands out as the shining new example in South Asia of a poor country achieving impressive gains in gender equality”. In fact, in almost all indices of gender development, Bangladesh now leads India. As a result, in the United Nations’ Gender Inequality Index, Bangladesh comes in 12 ranks above India, which is tied with Pakistan at 127th place.

Here are some comparison between the two subcontinental nations.

Bangladesh has a better sex ratio than India’s 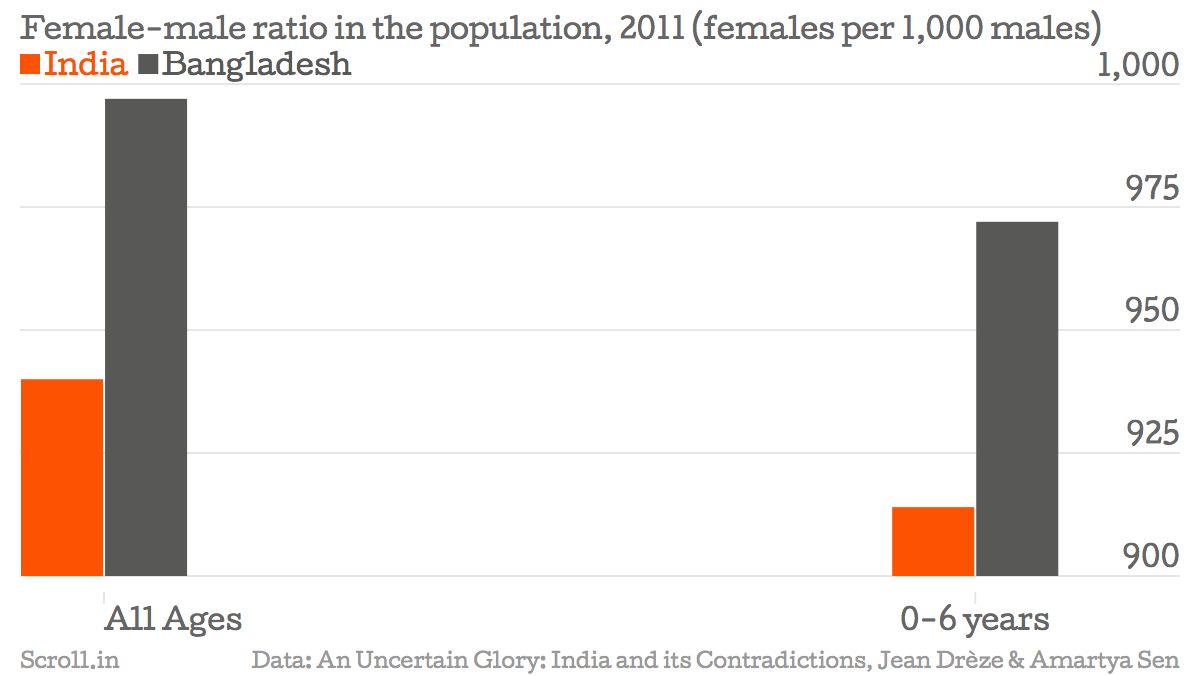 The sharp difference in the sex ratio in the 0-6 year range represents the devastating effect of large-scale female foeticide in India. 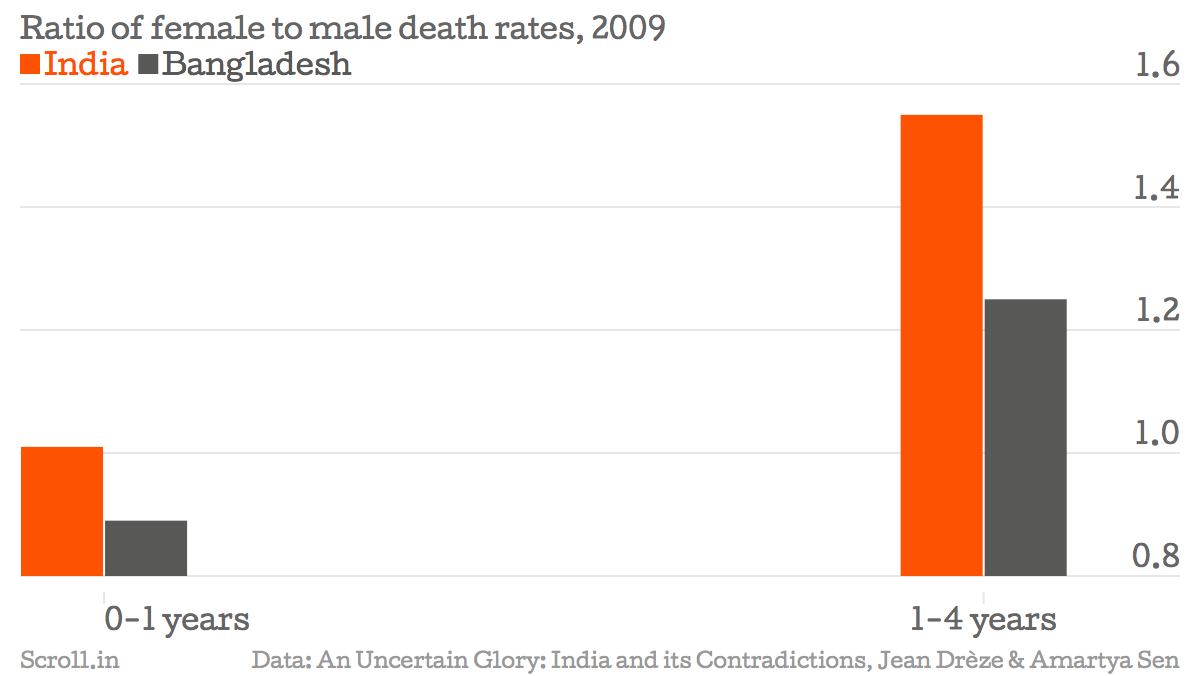 India’s high female mortality indicates the neglect of girl children and favouring of boy children. Parents take greater care of their boys than girls, leading to a larger number of girls dying of preventable illnesses such as pneumonia and diarrhoea.

Bangladesh does a better job of educating its girls 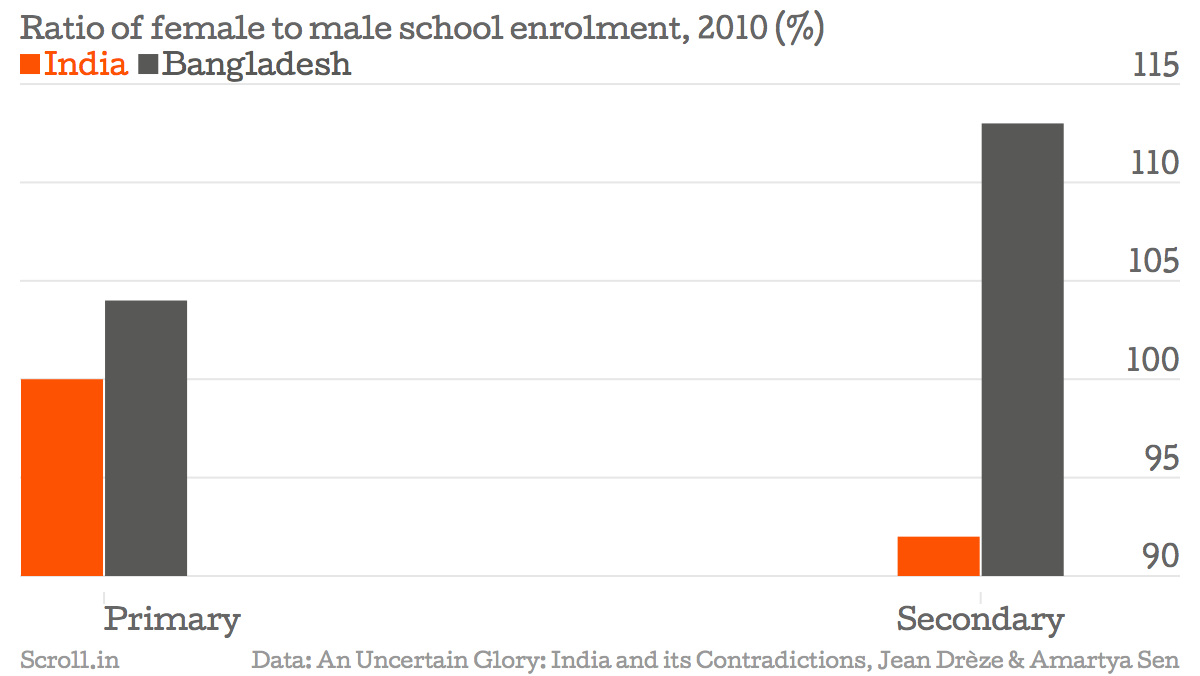 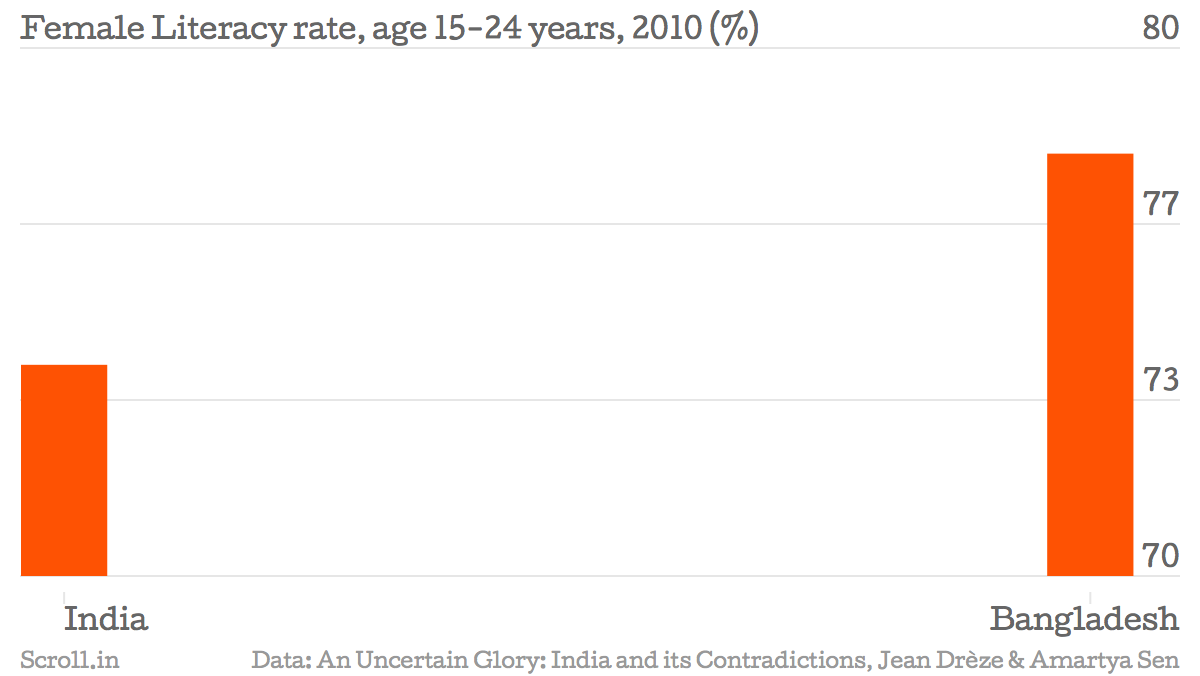 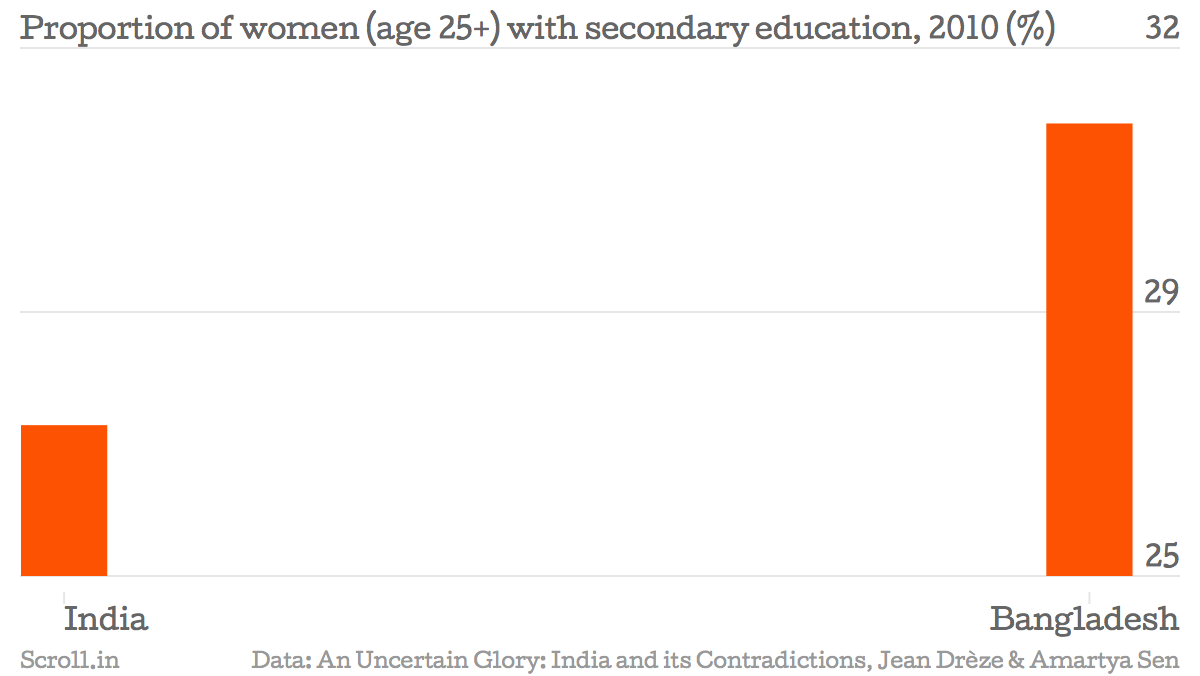 A number of people have supported Modi’s statement patronising women by pointing out that since Sheikh Hasina comes from a Muslim-majority country, this is a fair assessment, since Muslim women apparently do have a tough time of it.

PM @NarendraModi is right. Despite Gender Apartheid in Islamic countries #SheikhHasina has b'com PM of a Muslim country & fighting Jihadis.

This means that rather than condescend to Hasina because of her gender, people are now doing it because of her country’s majority religion: hardly a great improvement on matters. In any case, like many other lazy stereotypes, the data really doesn’t back things up.

Do so-called Islamic injunctions on gender segregation and veiling prevent Bangladeshi women from going out and working, as compared to Indian women? Not really. In fact, the Bengali nation has a female labour force participation rate that is almost twice that of India’s. 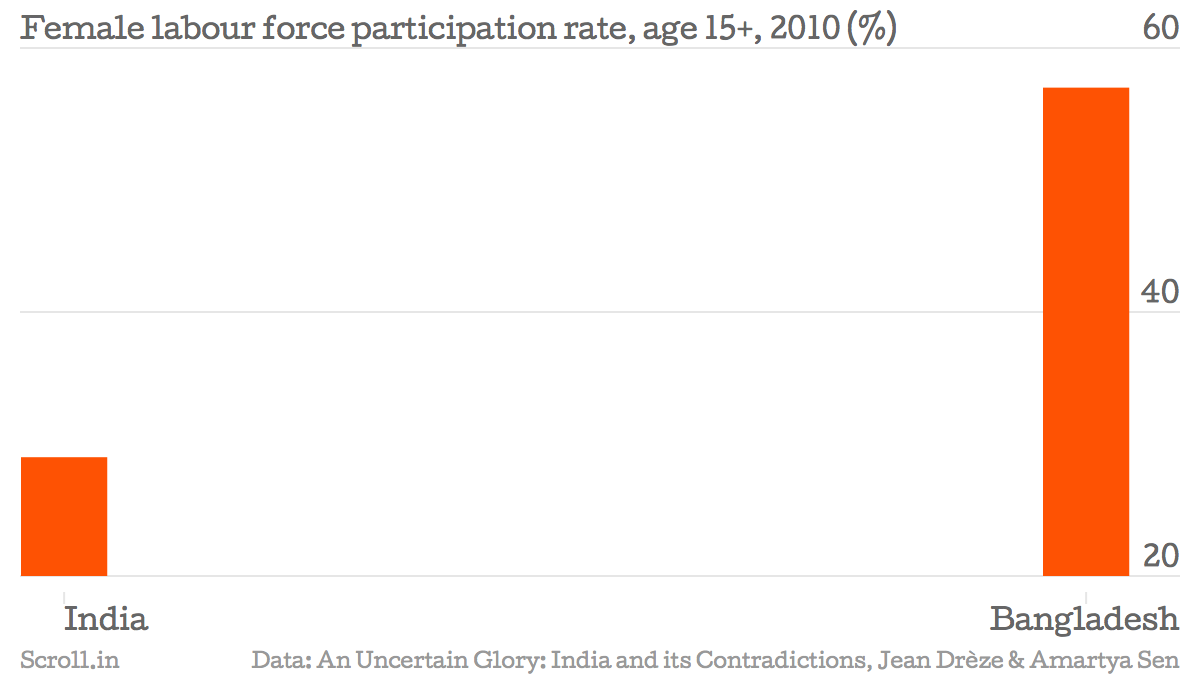 Bangladesh has a fertility rate lower than that of India’s. In fact, it’s almost reached replacement level fertility (at which the population stabilises in the long term). This is an outcome of a massively successful family planning programme which bought down the fertility rate so quickly that The Economist called it “one of the steepest declines in history”. 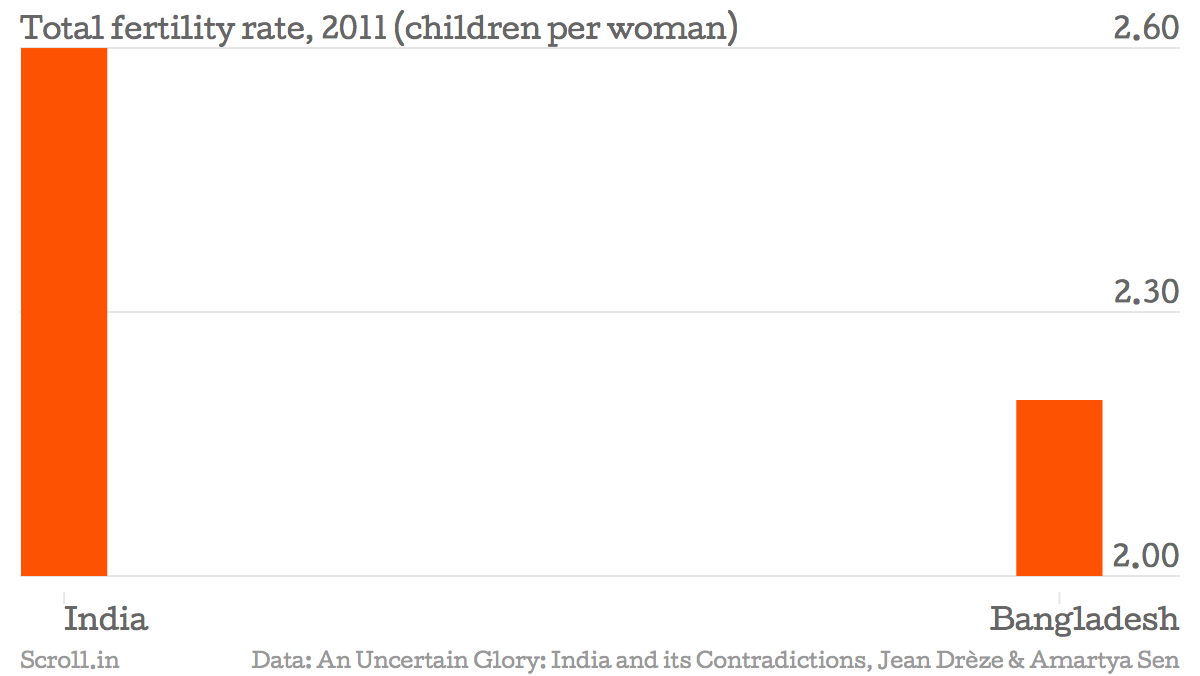 This might be a small slip-up amongst much bigger happenings, yet it does typify so much of Narendra Modi’s approach to politics: a self-congratulatory blitzkrieg as more substantive issues  are buried underneath. In Bangladesh, as is clear, Modi should have been trying to pick up some lessons from how this low-income country managed to give so much to its woman. As author and public affairs commentator Pankaj Mishra put it recently, “The one thing Mr Modi and his fans really should learn from the Chinese is their deliberate rejection of self-promotion and posturing… [Unlike Modi] Chinese leaders played down their strength and emphasised the problems before them”.