Contribute Now
Ad
Arjumand Yusuf, headmistress at BPS Batapora School in Shopian district of Jammu and Kashmir, retired a fortnight ago. She fought hard to ensure that her 70 students could continue to receive an education after Indian security forces occupied her primary school in 2003.

Her task would have been easier if New Delhi had agreed to endorse the new Safe Schools Declaration at the United Nations Security Council debate on children and armed conflict last month. But India was among the 38 countries that chose not to.

Beginning in 2011, the UNSC has requested increased monitoring of attacks on schools and teachers, and military use of schools. In 2014, it encouraged all member countries to “consider concrete measures to deter the use of schools by armed forces and armed non-State groups in contravention of applicable international law.”

Said Zama Coursen-Neff, children’s rights director at Human Rights Watch: “Hundreds of thousands of children worldwide find their schools under attack or used by fighting forces to wage war. The Safe Schools Declaration provides a concrete way for countries to commit to protecting children’s education, even during armed conflict.” 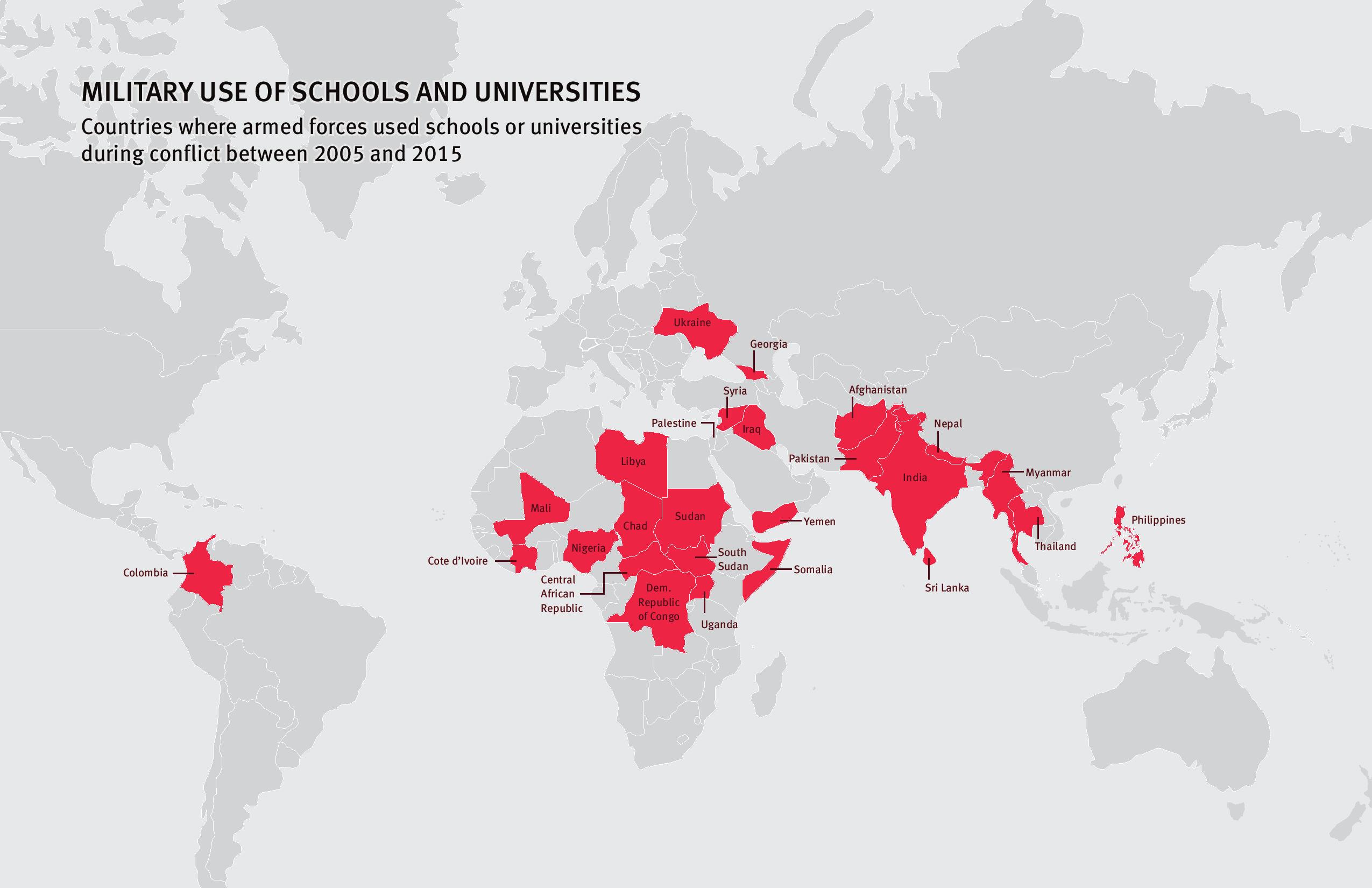 Since 2005, schools and universities have been used for military purposes by government forces and non-state armed groups in at least 26 countries, including India, Pakistan, Sri Lanka, Afghanistan and Myanmar – the majority of the world’s countries where there is an armed conflict.

It also exposes students to sexual violence, forced labour, and forced recruitment by the soldiers sharing their schools. Students must either stay at home and interrupt their education, or study alongside armed fighters while potentially in the line of fire.

This is exactly what transpired in the school at Batapora. Recalling the day the army occupied the school in 2003, Yusuf said, “Our day ended at 4pm. The following day, we found all our belongings thrown out by the army. The children were petrified that morning to see so many soldiers. They refused to enter the school. I asked the officer what was going on and he said that they had occupied the school’s seven rooms and we would have to leave.”

Yusuf negotiated with another school to move her students there. Out of the 70 students, only 40 remained. “The other school was unable to accommodate us," she said. "I had struggled to get these children to school. All my work was undone. It was not just the students, even the female teachers were nervous. We lost everything, including our playground.”

Despite this, General Officer-in Command 15 Corps, Lt Gen Subrata Saha told reporters at a function at Kashmir University in May that there are no government schools under army occupation.

In fact, in 2010, more than 129 schools across India were used as barracks or bases across the country, particularly in Bihar, Chhattisgarh and Jharkhand, but also in the country’s north-east, in Tripura, Manipur, Nagaland and Assam, disrupting education for an estimated 20,800 students. The same year, some security forces began complying with government and Supreme Court directives to vacate schools.

Last December, a mass grave with about eight human skulls were recovered from an abandoned Manipur school complex where Indian paramilitary forces had set up a base camp during the 1980s.

Despite the Supreme Court order, not much has changed. Nandini Sundar, who filed a petition in the apex court against the Chhattisgarh government about the vigilante group it established, explained the situation in the state.  “The court ordered the paramilitary forces to vacate the schools and hand them over to the authorities,” she said. “Since then, there has been no monitoring of schools to verify if they've complied with the order.” There are reports of Central Reserve Police Forces camps having come up next to schools and girls’ hostels, she added.

According to the latest report by Human Rights Watch, the security forces continued to use schools into 2012 and 2013 all over the country. In many cases, security forces have taken over entire school facilities and campuses, completely shutting down schools. In other instances, they have occupied a part of the school, forcing classes to continue in crowded quarters and alongside armed men.

"The study also notes that both male and female students have been sexually assaulted and harassed, and illegally recruited into armed groups by undisciplined soldiers using their schools or universities. The educational consequences of military use of schools and universities can include high student dropout rates, reduced enrolment, lower rates of transition to higher levels of education, overcrowding, and loss of teaching time. Girls are particularly negatively affected."

Militants attacked some 140 schools in India between 2009 and 2012, and there was widespread use of schools as barracks or bases by government forces, mostly in the east of the country.

When using schools, security forces often fortified the buildings, set up sentry boxes and lookout shelters and dug trenches or created barriers from rings of barbed wire and sandbags, leaving institutions looking like military installations rather than places of learning. This may have increased the risk that they might be viewed as military targets even after the troops had left.

School buses need CCTV cameras and at least one parent should be present: CBSE guidelines